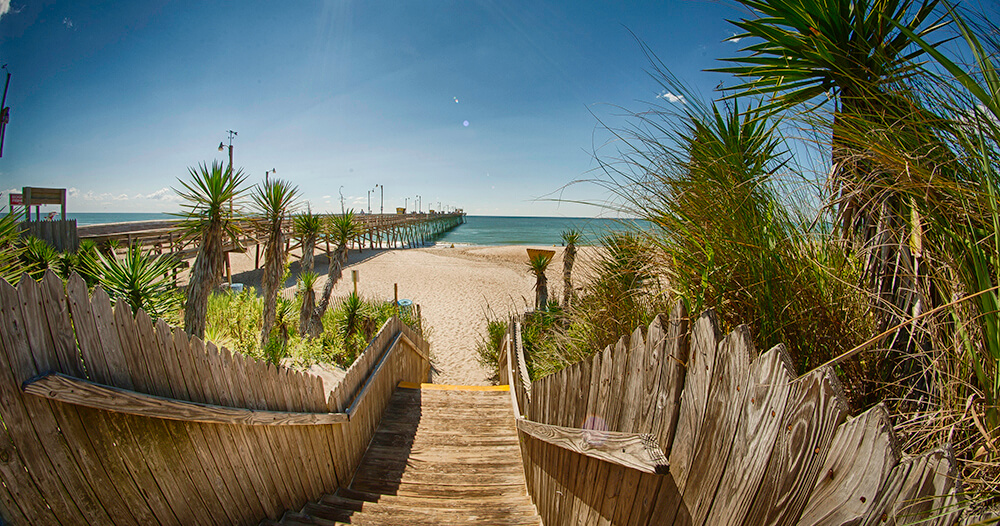 SPONSORED BY The Crystal Coast

The Emerald Isle Causeway, or “the big bridge,” was our first cause for celebration. Driving from Cape Carteret over to Emerald Isle, we scrambled to roll down our windows for a whiff of salty beach air. My grandmother and I were in the backseat of my parents’ Caprice Classic, now shuttling down the Crystal Coast’s Emerald Drive, and I could tell we were getting closer by the street names. First there were the trees — Loblolly Street, Cedar Street, Live Oak Street. Then we reached that point in the island where, if you craned your neck just right, you could catch glimpses of the Atlantic Ocean or Bogue Sound out either window. My excitement reached a fever pitch when we got to the “name” streets — Elizabeth Street, Mat Drive, Joel Lane. William Street was ours, though, and we made a right into what would be our home for the next week — the same one we rented every summer.

Everything was bigger and better here. Our house was on stilts, and each floor had its own wraparound porch. The whole house swayed every time the screen door slammed, ushering in cousins and aunts and uncles who rotated in and out for two- or three-day stints.

Now, a generation later, my husband and I cruise down that same drive with our 8- and 6-year-olds in the backseat. For one week each summer, the world is our oyster. Some of our traditions are the same — a day trip to Beaufort, a night out for fried shrimp — and others are new. Here are a few of our favorite ways to explore the Crystal Coast.

What Will You Explore?

Eighty-five miles of gleaming beaches only begin to tell the story of The Crystal Coast – from crystal waters bordering sandy, sparkling beaches, to wild mustang horses and a towering lighthouse – the natural beauty of the Southern Outer Banks await exploration. 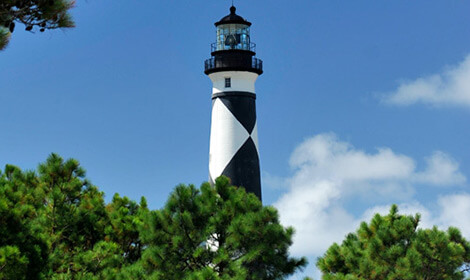 The Crystal Coast’s long, flat beaches are punctuated by fishing piers jutting out just far enough that anyone can make the perfect catch. Lure blue crabs with a little chicken meat on a string, or drop a line to reel in redfish, black drum, sea trout, striped bass, or the occasional flounder for supper. At the Bogue Inlet Fishing Pier in Emerald Isle, you can pay a fee to rent rods and cast your reels. Or show your support from a bench, where you can sit and listen to the fishing lines whistling over the waves and fishermen and women shouting and hooting over record catches. If you get there early, grab your coffee and a doughnut (or three) at Flip Flop’s Doughnuts to start your day off right. Their homemade breakfast staples include doughnuts topped with cookie crumbles or filled with custard a la Boston cream.

If you want to go deeper, book a charter at one of the coast’s first-rate fishing tours charters such as Breakday, where an experienced captain will guide you to the catch of your dreams along sound, river, or ocean waters. “We take you to fish from the marsh to the ocean,” Captain Justin says. But he points out that experiencing Crystal Coast waters is more than just making a big catch. “Some people just enjoy the boat ride,” he says. “Depending on the season and the weather, we see bald eagles, porpoises, otters, osprey, and lots of other wildlife. We give you the experience you want.” 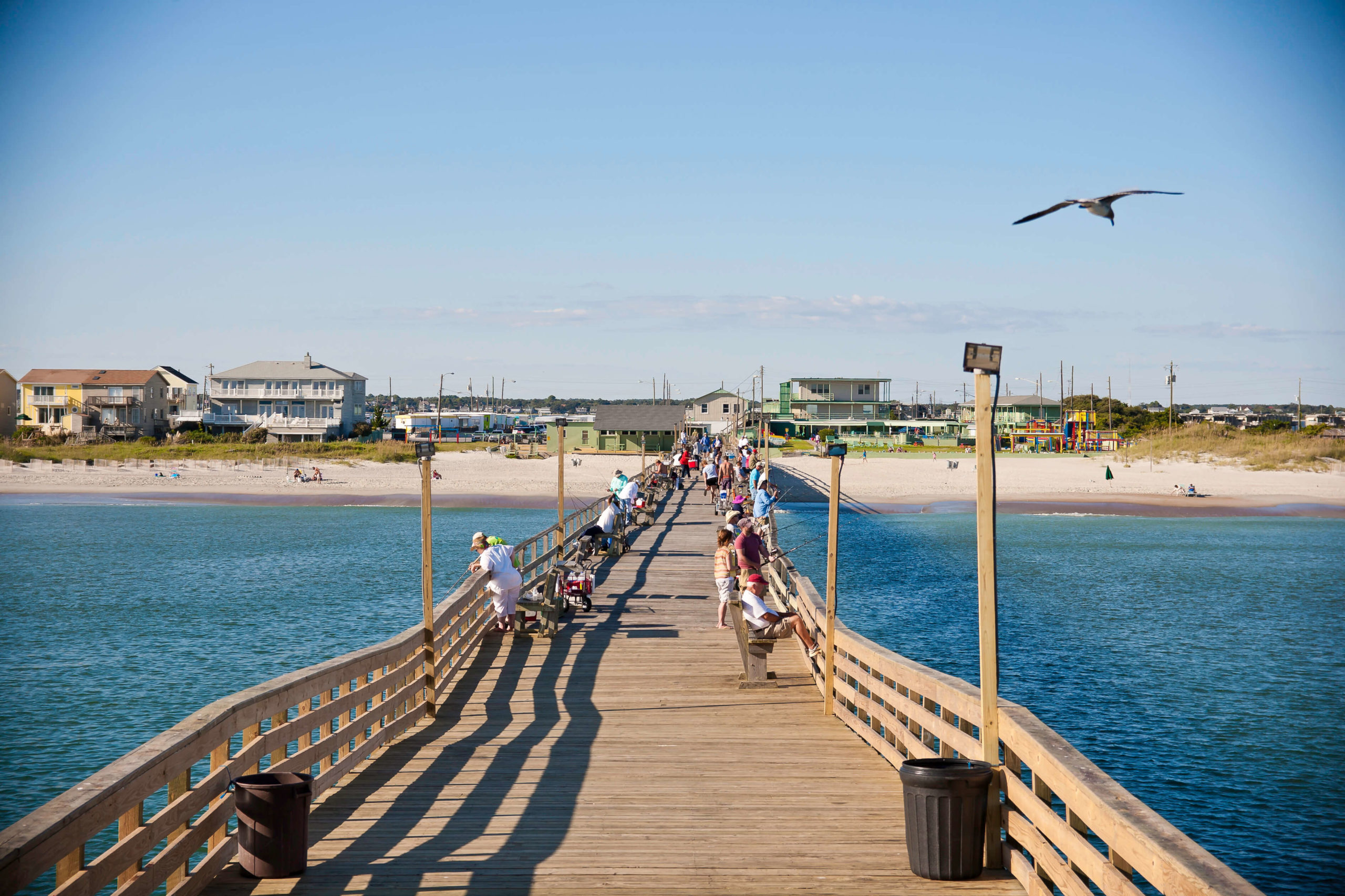 In the 1500s, European ships wrecked on the unfamiliar shores of the New World. When they did, scientists speculate that exquisite Spanish mustangs escaped. For more than 400 years, these horses have been roaming wild on North Carolina banks, caring for their foals, frolicking on Shackleford’s protected beaches, and foraged for food. Today, you can catch glimpses of these Shackleford horses, known locally as “Banker ponies,” with a day trip or guided tour like the ones offered by the experts Crystal Coast Lady Cruises.

After a short ferry ride to the island, your guide will help you spend the day in nature, shelling and horse spotting. “The Shackleford Wild Horse and Shelling Safari is the best of both worlds on Shackleford Banks,” says Crystal Coast Lady Cruises owner Jennifer Aswad. “Shackleford has an abundance of shells like Scotch bonnets, sand dollars, conchs, and more.” You can hunt for coastal treasures while communing with wild horses on the beach, then bring the day’s prize finds back to your beach house to display for the rest of your trip. 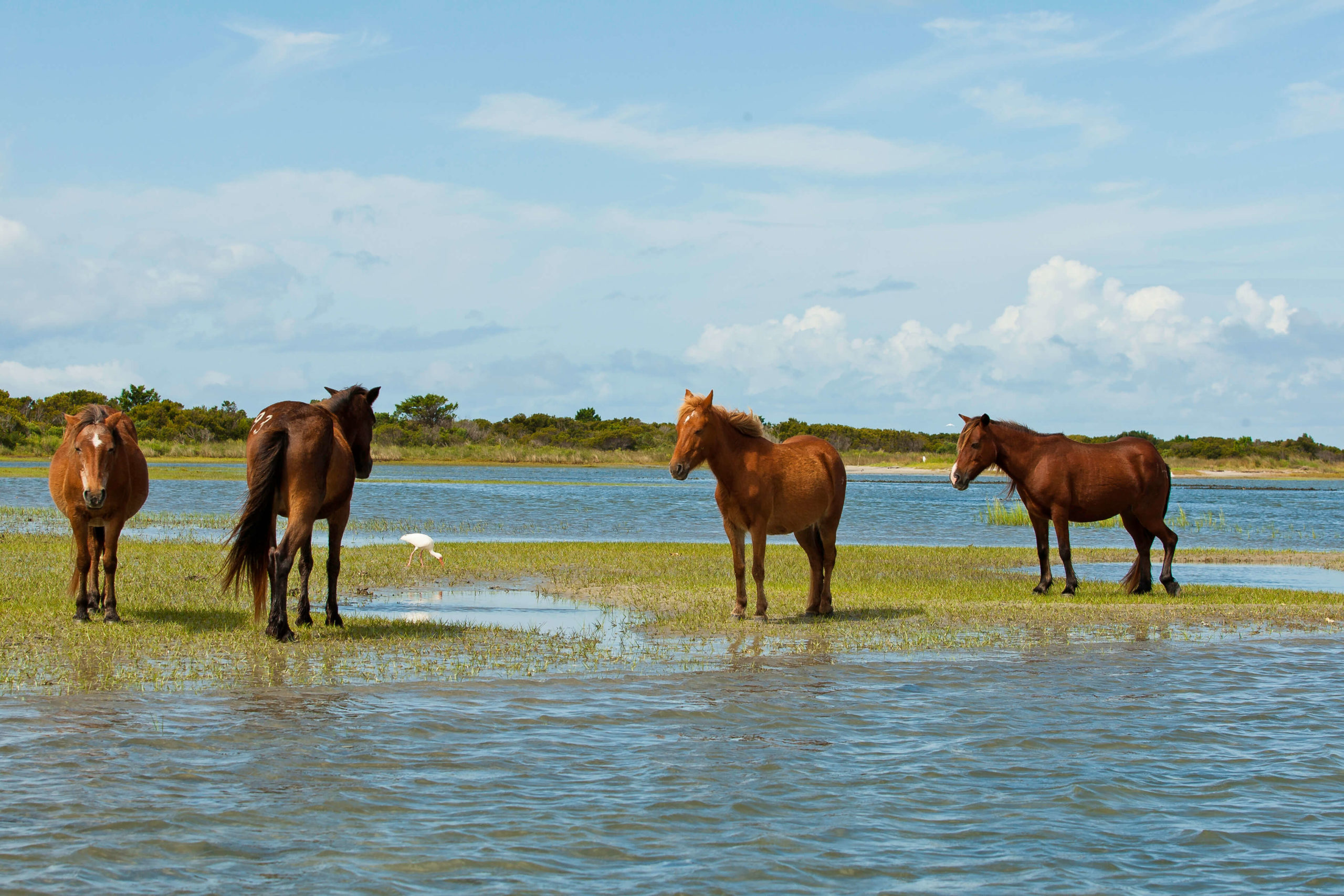 Catch a glimpse of the Shackleford horses that have been roaming wild on North Carolina banks for more than 400 years. photograph by The Crystal Coast

Taste the “Napa Valley of Oysters.”

A bounty of rich waterways gives the Crystal Coast an abundance of local oyster harvesters. They practice sustainable mariculture, plucking delicious jewels with a range of flavors gleaned from their waters, from slightly tangy to super salty. Jay Styron’s Cedar Island Selects boast mid-level salt with a sweet meaty finish; Ryan Bethea’s Native Son Oysters claim to be some of the saltiest tasted; and “Clammerhead” David Cessna’s Wild Ponies™ channel the crisp, salty flavor of the Atlantic Ocean mixed with a wholesome sweet flavor imparted from the fresher waters of the upper Newport River that flow on falling tides. Pick some up from one of the Crystal Coast’s local seafood shops that dot your drive, and take them back to your beach house to crack open as the sun sets.

The Graveyard of the Atlantic, unsolved mysteries, stories of disaster, horror, and triumph: These are the stories North Carolina Maritime Museum visitors learn when they pop into this favorite stop on Beaufort’s Front Street. Don’t leave without seeing the official repository — complete with cannons, grenades, and belt buckles — of Blackbeard’s wrecked flagship the Queen Anne’s Revenge. And just across the street at the Harvey W. Watercraft Center, you can watch expert boat builders at work or even take a boatbuilding course.

For a true adventure, hop aboard the passenger ferry to Cape Carteret Lookout Lighthouse and Shackleford Banks. Here, the Core Sound Waterfowl Museum and Heritage Center seeks to document the traditions and people that make the Core Sound so unique. Before you leave your beach house to make the trip, call ahead to ask about a hands-on demonstration of decoy carving and quilting.

Climb 207 steps to the top of the famed diamond lady lighthouse.

Cape Lookout National Seashore offers escapists a 56-mile stretch of undeveloped shimmering beaches — with renowned shelling (think miles of large, unbroken conch shells), birding, fishing and camping with jaw-dropping views. From the third week in May to the third weekend in September, the Cape Lookout Lighthouse, known for its iconic black-and-white diamond pattern, is open for climbing. This hike is not for the faint of heart; trekking up the 207 steps is kind of like climbing a 12-story building. But if you commit, you’ll be rewarded with a breathtaking view of the cape, Core Sound, and the lighthouse grounds. 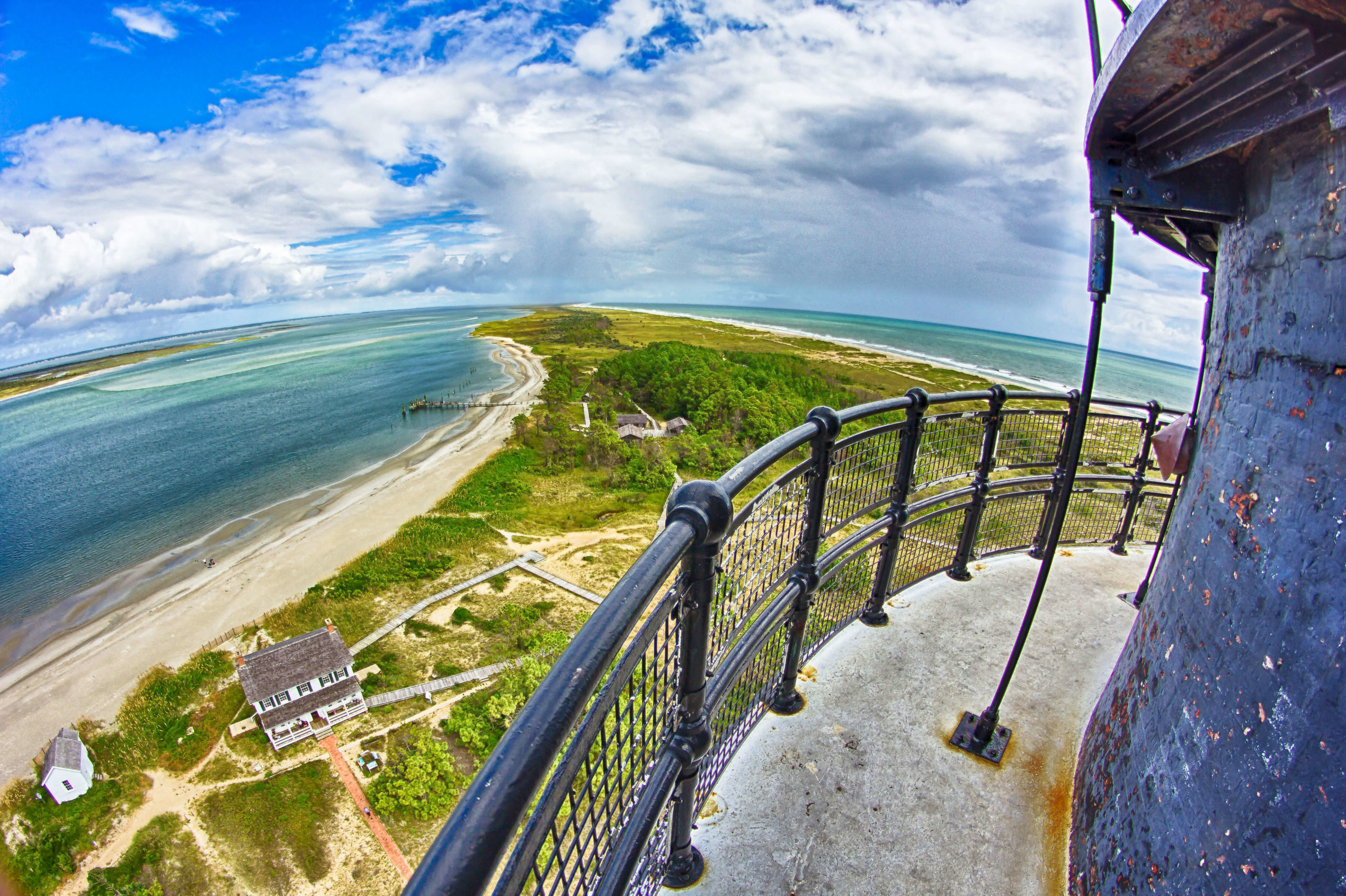 Climb to the top of the Cape Lookout Lighthouse for breathtaking views of the cape, Core Sound, and the lighthouse grounds. photograph by The Crystal Coast

Indulge in the fresh seafood in true fish-to-fork fashion.

With one of the longest and most diverse fishing seasons on the Atlantic Coast, the destination touts more than 85 locally owned restaurants — more than 30 of which participate in the Carteret Catch program, changing their menu daily based off the fresh catch of the day.

Although you’ll easily be able to make your own delicious seafood dinners at your beach house, there’s one meal out shouldn’t miss: When you’re in Beaufort, be sure to get a table at Beaufort Grocery on Queen Street in the historic district. Modeled after a French country bistro, the restaurant is open for lunch and dinner and offers favorites like pan-seared shrimp and scallops alongside chargrilled New York strip. 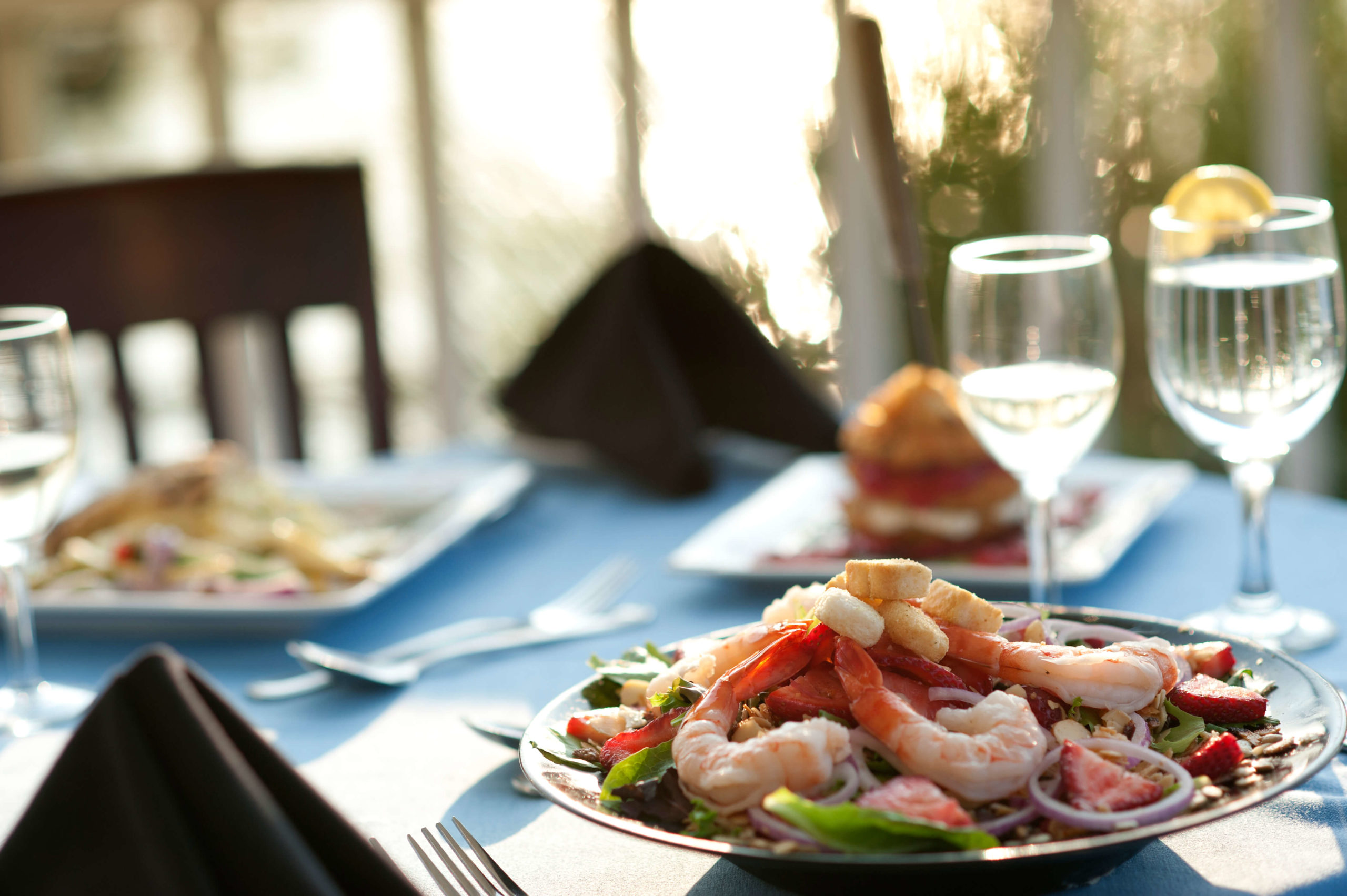 Many of the locally owned restaurants in the area change their menu daily based off the fresh catch of the day. photograph by The Crystal Coast

Every day at the Crystal Coast offers astounding light shows. From its soft, glittering sand, you can watch the brilliant sun rise to the left and set to the right. At night, you can see heat lightning that makes the vast sky glow green over the ocean or see stars shining so brilliantly you feel like you could gather them like shells to take home. And between these light shows, relax in the Atlantic’s gentle, rolling waves, fly a kite, go surfing, or look for shells. The Crystal Coast’s 85 miles of uninterrupted shoreline make for the perfect place for all to play. But be careful — when you make a beach house your home away from home, you might not ever want to leave.