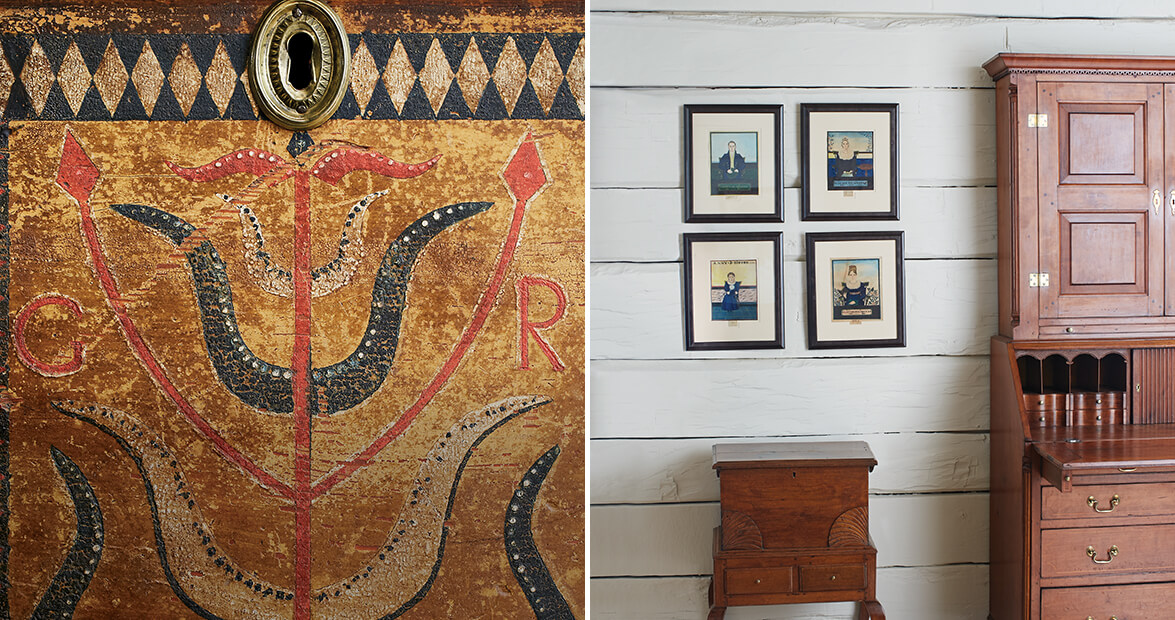 On a cul-de-sac in Winston-Salem, in 30 rooms created inside a converted Kroger grocery store, the only museum of its kind in the world exists. This is MESDA — give that S in MESDA a good zzzz sound if you want to be in the know. And nowadays, while an all-caps acronym often indicates something military or technical, MESDA stands for nearly the opposite. The Museum of Early Southern Decorative Arts at Old Salem Museums and Gardens tells the story of seven states — North Carolina, South Carolina, Georgia, Maryland, Tennessee, Kentucky, and Virginia — through their settlers’ early decorative arts.

First, we’d probably better define “decorative arts.” The decorative arts are manufactured objects made for domestic use. Furniture. Pottery. Andirons. Cradles. Long rifles. Don’t think a weapon qualifies as “decorative”? Examine the engraving on the silver stock. The intricate carvings aren’t merely decorations idly whittled while waiting for the cows to come home. “Before MESDA,” says June Lucas, the museum’s director of research, “We were just looking at a piece of furniture, or an object, from an aesthetic point of view. As in, is it pretty?” MESDA’s mission means looking again and asking more: Did the piece require a lot of experience and craftsmanship? What is the story behind the object?

And how early is “early” in the MESDA acronym? “The beginning of time,” Lucas laughs, then qualifies. “When the first foot was set at Jamestown until the beginning of the Civil War.” 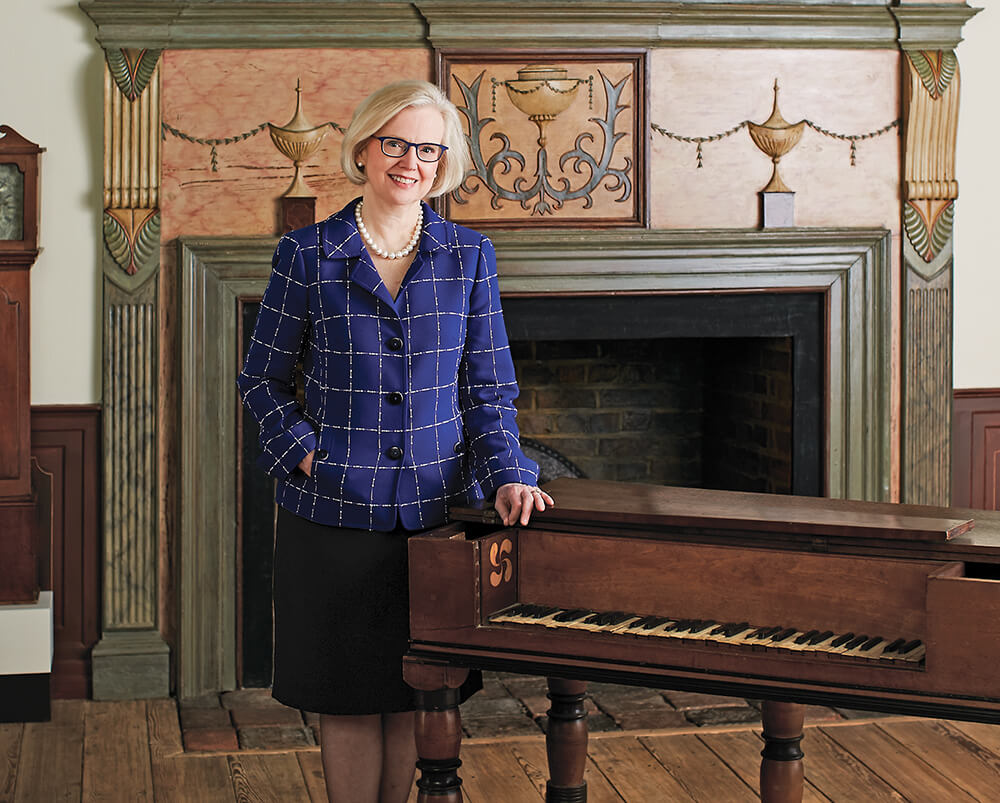 The Civil War marks the end of the period because of its influence on furniture production in the rural and coastal areas of North Carolina. That, combined with postwar industrialization and the increase in factory-produced goods, meant that particular styles, and those who fashioned them, became diluted, more difficult to trace or pinpoint.

“If the stuff doesn’t have a story, it probably doesn’t stay here.” — June Lucas, MESDA

This retired schoolteacher’s earliest memory — “seared in my brain at 5 or 6,” she says — is of a food safe sitting on “some relative’s porch.” She can’t remember the relation, or the location, but she remembers that food safe, which sparked a lifelong interest in local furniture. Throw in the furniture-making hometown of Lenoir, and an uncle in the furniture business, and you’ll understand how an interest became a passion, and why Lucas spent her weekends away from the classroom attending auctions and yard sales, searching for old furniture made by North Carolinians. “When my husband retired, all I wanted to do was move to Winston-Salem and work at MESDA,” she says. Before her arrival, the museum was looking elsewhere for decorative arts treasures. “There was a ‘we can do North Carolina anytime; it’ll always be here’ way of thinking,” she says. Starting out as a guide, with her love for Piedmont furniture, Lucas fell into a MESDA gap, and 20 years later, she’s still filling it.

Still, one question begets another. How, pray, does the Piedmont, the center today of so much of the state’s population and so many of its universities, acquire a “backcountry” label? Isn’t backcountry a term for the back 40 acres of an eastern tobacco field? There’s a good explanation: For current historians and then-settlers, the North Carolina “backcountry” referred to anything west of the fall line, that geographical and topological point between the Piedmont and Coastal Plain where rivers run from rapid and rocky to flat, smooth, and free from waterfalls.

Waterfall or not, communities grow up around all-necessary water. Thus, the Haw, Deep, Yadkin, and Catawba river valleys defined the backcountry first, and then the religious denominations of these communities’ primary settlers: British Quakers, Scotch-Irish Presbyterians, Germanic Lutherans and Moravians. Lucas points to a map. “Here is the Quaker crescent on Cane Creek, in Alamance and Chatham counties. In Randolph and Guilford counties, too. The Scotch-Irish were really clustered in Mecklenburg, Cabarrus, Iredell, and this part of Rowan County.” Each group brought its customs, food, and way of living that intermingled along these rivers. Ways of living are reflected in material culture, which Lucas neatly, simply defines as “the stuff people lived with.” In other words, those chests, rifles, bowls, desks, cradles, and andirons. 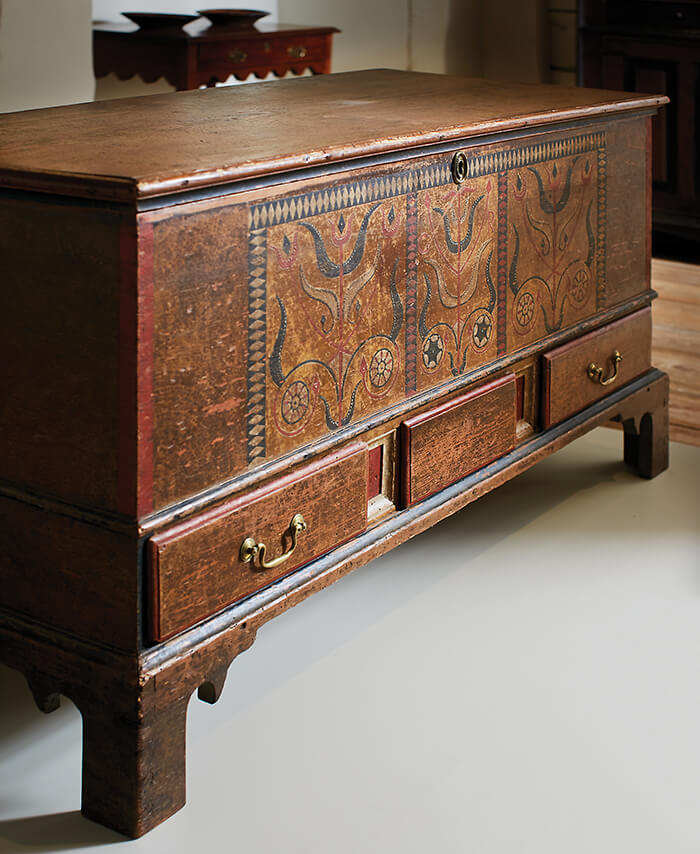 A clue to the backcountry provenance of this Piedmont painted chest is found in the initials GR displayed on the front. photograph by Stacey Van Berkel

A combination detective and Antiques Roadshow personality, Lucas, along with her team, has systematically gone through North Carolina’s backcountry furniture, plus maps, wills, photographs, census reports, genealogy charts, and any other document they can get their hands on. Family history can influence the way a piece looks, which Lucas can use to tell who made it and where it was made — sometimes, she says, “down to the creek it was made on.” How? A cabinetmaker’s customer base was about 10 miles around and necessarily near a water source, for a sawmill. A farmer might say, “I want a desk like the one you made for James Simpson.” Once a furniture-maker — and the way he shaped a foot or painted a pattern — is discovered and documented, you look for a repeat of that design. The research center has unearthed thousands of backcountry cabinetmakers working throughout the region during the period MESDA represents. “The Yadkin River is huge,” Lucas says, “with so many cabinetmakers along it that I could get lost in them. The Deep River, too. Everyone in their region knew someone who was producing something someone needed — pottery, paintings, textiles.”

“Before MESDA, we were just looking at a piece of furniture from an aesthetic point of view.”

Inside the museum, each study gallery is a tableau depicting a region and time period. Three are devoted to North Carolina’s backcountry: the Catawba Parlor, Catawba Bedchamber, and Piedmont Room. Door heights, walls and floors, and even stairs that lead nowhere reflect interiors where furniture and other decorative arts were discovered. In the Catawba Parlor, Lucas points to a fireback from Vesuvius Furnace in Lincoln County. Someone had to carve the mold for the molten iron to be poured into, and that’s how firebacks came to be considered an example of decorative arts. With her flashlight, Lucas finds an inscription — “Made by Miles Willis’s grandfather” — penciled on the back of a bookcase made for Revolutionary War hero Gen. Joseph Graham.

The best example of a paint-decorated chest from Piedmont North Carolina is here as well. From Alamance County and made by Jacob Anthony, the chest bears a GR on the front for George Reitzel, a young neighbor of Anthony’s and likely an apprentice at his shop. If there’s a piece displayed at MESDA, a family’s story is behind it.

“You keep tracking back, and tracking back,” Lucas says in the Catawba Bedchamber. In that way, you discover that the Swisegood School was one of the largest groups of Piedmont North Carolina cabinetmakers. Together with their apprentices, members of the Swisegood School made at least 100 pieces between 1790 and 1858. MESDA has recorded 70 of them in their research files. 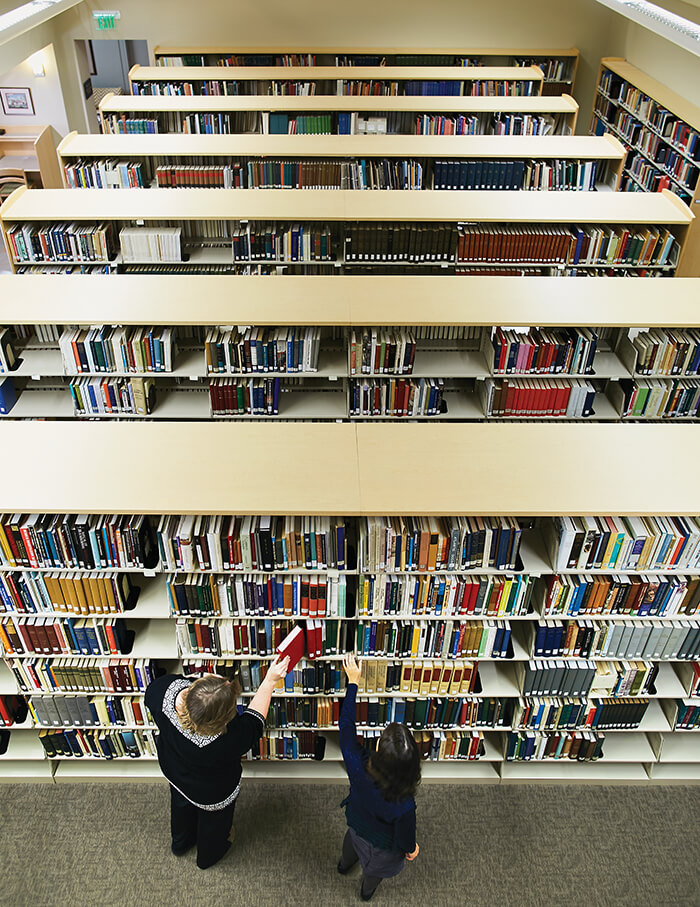 The Anne P. and Thomas A. Gray Library contains more than 20,000 cataloged volumes — including rare books and manuscripts dating from 1590 to 1865 — that focus on early North Carolina material culture. photograph by Stacey Van Berkel

And what files they are: a long row of neck-high cabinets filled with photographs of Piedmont North Carolina furniture. Bedsteads. Sideboards. Cupboards. Desks. Plus file after file on artisans like Jessie Clodfelter in Davidson County, James Gheen in Rowan County, William Little in Anson County. “We went out and documented every decorative object we could find that was made in the early South,” Lucas says. Since 1965, the museum’s researchers have cataloged more than 18,000 objects, and recorded detailed information on more than 85,000 artisans working in 176 different trades.

The research center and library is open to scholars, historians — and you. Looking for a dyer apprentice or coppersmith or coach trimmer in Gaston County? MESDA’s website lists every Southern artisan, documented by researchers and connected to the decorative arts of the period. Inheritors, collectors, and the merely curious bring pictures of pieces they wonder about to the center to look for their origins, because origins so often illuminate a family history. “There’s no place in the world that can help you document a piece of furniture that may be from Piedmont North Carolina like MESDA,” Lucas says. In addition, what’s so appealing about the museum is that a knowledgeable guide escorts you through the rooms on the twice-daily tours. If you want to know only about samplers, or eastern North Carolina cellarettes, a topic-specific tour is easily arranged.

But museums don’t just happen. Someone — a someone with a passion and plenty of perseverance — insists, “This must be done.” For MESDA, that someone was Winston-Salem resident Frank Horton (1918-2004). The son of an antiques dealer mother, Horton grew up seeking out and purchasing antiques, too. An early volunteer in supervising the restoration of Old Salem, Horton began negotiating in 1960 to establish a museum to house his and his mother’s growing collection. In fact, he traded his house in the historic section to acquire the old Kroger, and assumed all costs for the renovation and installation of the offices and period rooms. MESDA opened in 1965. During his 50 years working for Old Salem and MESDA, Horton never collected a paycheck. His legacy lives on through his name, which is synonymous with the study of Southern material culture.

And while today’s material culture often carries the negative connotation of shiny cars, jewelry, and grown-up techno-toys, history’s decorative arts, which MESDA so beautifully, authentically displays, mean something quite the opposite: those things our backcountry forebears made by hand, with resources at hand, to survive and enhance their backcountry lives. 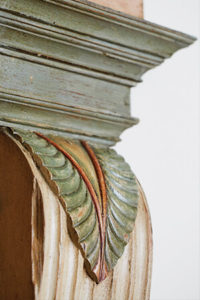 Catawba County (c. 1810-1815) • This console, with its backcountry interpretation of a formal leaf motif, is from the parlor mantel of the Ephraim Perkins House. The original carved and painted surface makes this woodwork some of the finest to have survived in the Piedmont. 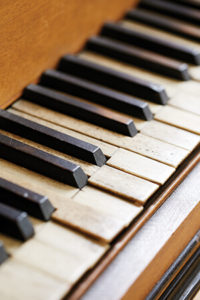 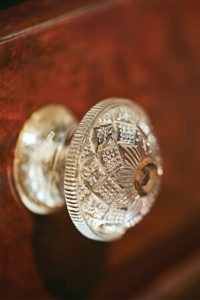 Randolph County (1833) • Eli Spoon and his apprentice, Joseph Whitney, made this chest of drawers; its price of $15 is noted on the bottom. By 1833, a chest of drawers was a common form of furniture in middle-class homes, and glass knobs were considered fashionable additions. 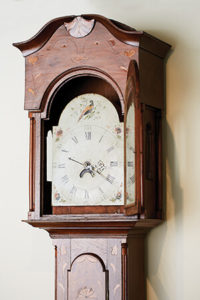 Rowan County (c. 1810) • The works of this clock — considered one of the finest clocks ever made in the Piedmont — were made in Salem by clockmaker Johann Ludwig Eberhardt, and the case was made by a member of the Stirewalt family of Rowan County.