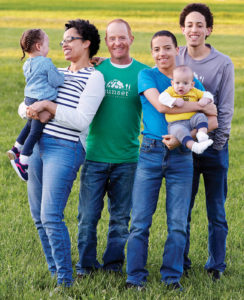 The perfect carrot, according to perfector of produce David Williams, is about the diameter of your thumb, four to five inches long, and sweet, like candy. “It’s hard to find in a grocery store,” he says. That’s partly why David and his wife, Nneka, owners of Sunset Market Gardens in Reidsville, planted their first formal raised-bed garden in 2010. “We had health issues, and we wanted to be more self-sufficient — to know where our food comes from.” Since then, their venture has expanded into an acre of land that grows nearly 40 varieties of produce, including cucumbers, squash, new potatoes, broccolini, and beets.

Sunset Market Gardens may be best known for its lettuce mix, washed and ready to eat. And thanks to greenhouses that let the Williamses get a head start on the season, customers are treated to ripe, juicy heirloom tomatoes by the first of May. On Wednesday afternoons and Saturday mornings, the family sells their produce alongside a carefully curated mix of eggs, sourdough breads, baked goods, cheeses, milk, and meats, all sourced from local farms. “We tried to create a farmers market feel,” David says. “A one-stop shop for health-conscious shoppers.”

Not sure you’d put carrots in the candy category? Come on out — they’ll make you a convert. “People come to the farm and say they’ve become food snobs,” David says. “They didn’t know you could snap the stem of broccolini and actually taste the sweetness.”