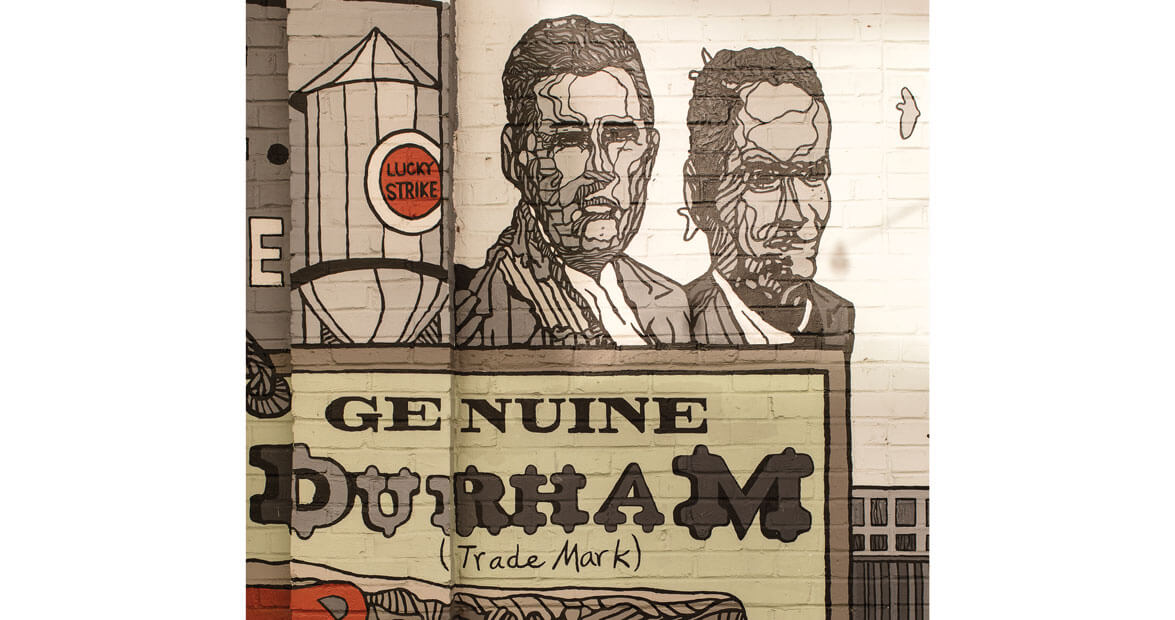 The bricks seem to catch fire in the sun and glow; they stay cool to the touch after dusk. Arranged in arches over the windows at Brightleaf Square and skipping up the Lucky Strike smokestack at the American Tobacco Campus, they are a constant reminder of Durham’s once-dominant industry. The bricks remember. Get close enough, and they might release a fragrant whisper of the tobacco they housed decades ago.

Darius Quarles knows every inch of the bricks outside what was once the Liberty Warehouse. For 45 days — one for every foot of space he’d been given — the Durham-based artist scraped the original paint off one of the few remaining walls of the former tobacco auction house, where auctioneer L.A. “Speed” Riggs made his name and became the “voice of Lucky Strike,” and farmers waited on their auction results over chitlins and grits at the Liberty Cafe. In the first half of the 20th century, the warehouse district just north of downtown Durham housed a half-dozen of these auction houses, bringing together farmers from the region and representatives from all of the major tobacco companies.

Quarles grew up on a farm in Virginia and remembers the stories of black tobacco farmers, like his grandfather and uncles, who would travel to Durham to sell their product for a fairer price than they could get in Richmond. The entire city smelled like tobacco, they said. Quarles found that hard to believe.

“When I got here, you could throw a stone in Durham and hear it for a block.”

By the time he got to Durham in 2000, the Liberty Warehouse hadn’t held a tobacco auction in 16 years. Instead, it had become a storage space and a haven for artists, the original home of the still-thriving Liberty Arts collective and the Scrap Exchange. “When I got here, you could throw a stone in Durham and hear it for a block,” he says. But it was an ideal place for an artist like Quarles, who had his first art show in the Liberty Warehouse and began what would become a flourishing career that supported his growing family. Fourteen years after his arrival, he found himself outside painting a massive mural, enlisting his teenage son’s help to scrape the old Pepsi-Cola advertisement off the brick. “It was a task, but I was up for it,” Quarles says. “Especially with the history of that building.” 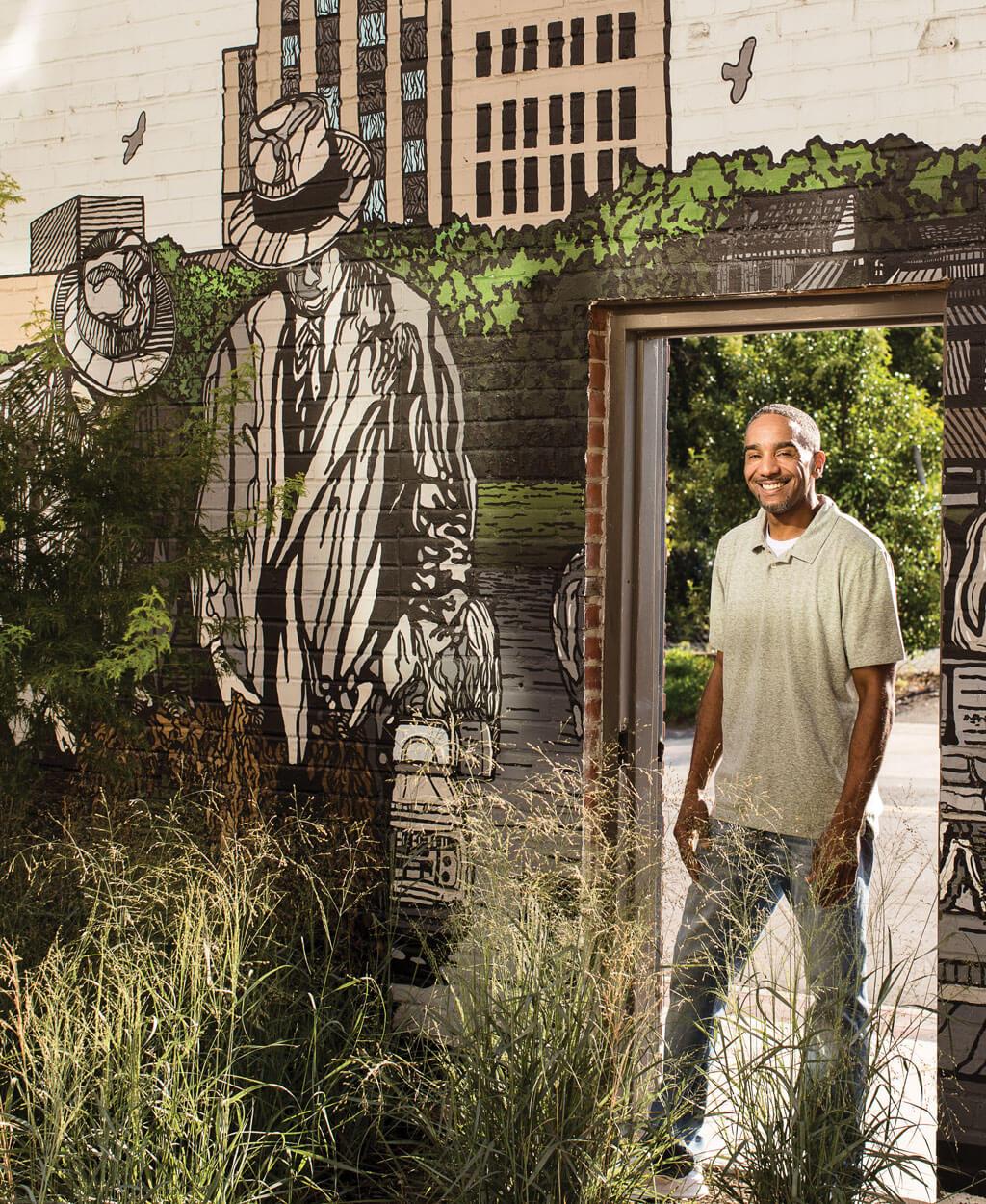 Quarles’s mural captures decades of local tobacco history and the city that grew around it: from the leaves growing in the fields, which would make their way to downtown warehouses like Liberty, to businessmen, like S. Walker Stone and Frank Satterfield, whose names still pop in white paint on the other side of the brick wall. Signs from inside the old warehouse, like a Pepsi-Cola ad, overlap with the icons of Durham’s tobacco boom, including the Blackwell Company’s world-famous “Bull Durham” loose-leaf brand. The Lucky Strike tower is in the mural, too, and the Hill Building, the 17-story Art Deco beauty that looms less than half a mile away. 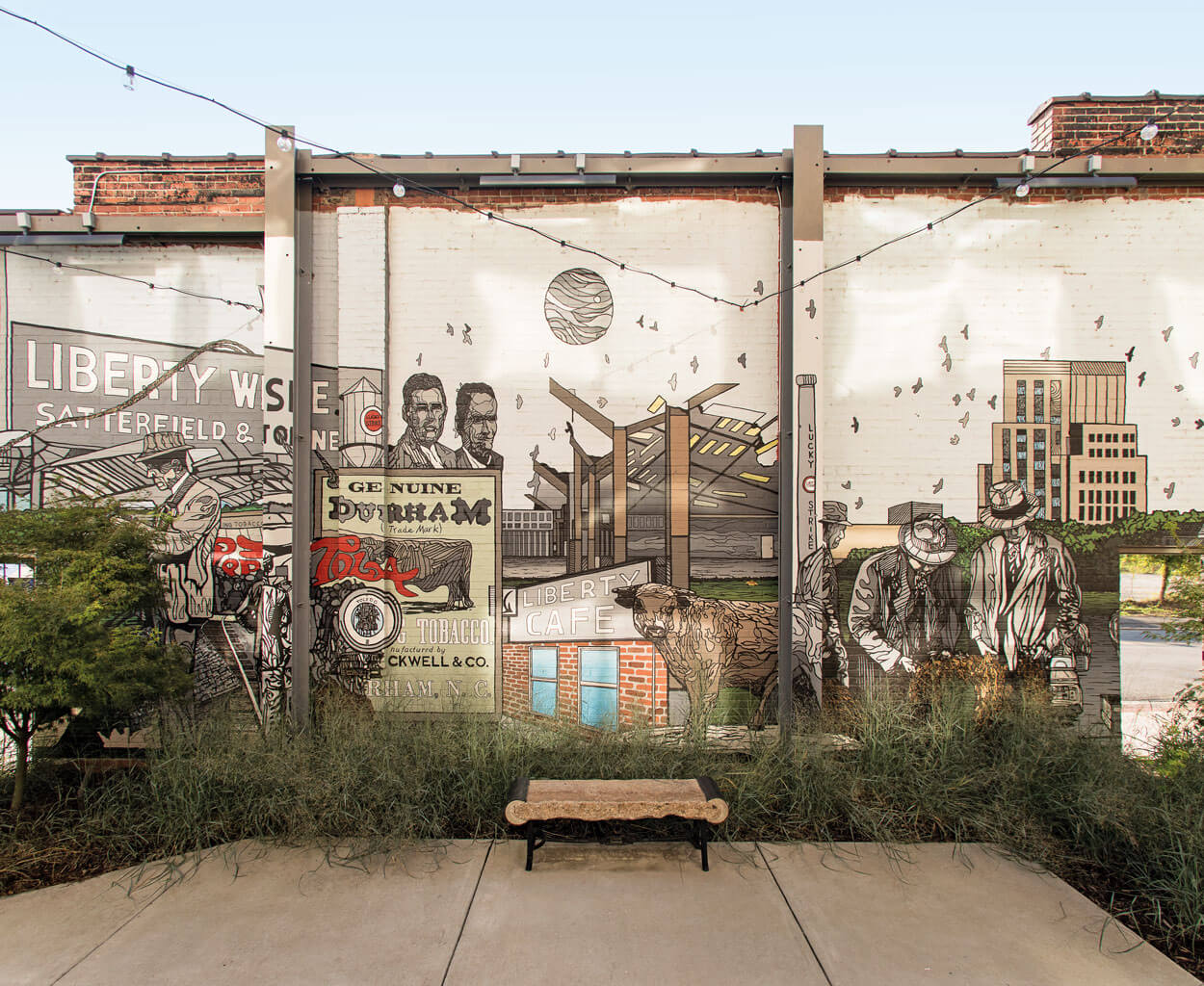 The beloved downtown statue of Major the bull, Durham’s mascot, was forged in the Liberty Warehouse, so Quarles included him in the mural, too. The warehouse became a lively workspace for artists after the demise of the local tobacco industry. photograph by Alex Boerner

The mural, like the warehouse that is its canvas, represents Durham’s collision of past and present, rural and urban: In this same space, a farmer in overalls left the auction flush with cash to buy a washing machine at one of the nearby stores; later, artists built thought-provoking installations beneath those same creaky floorboards. Now, the shell of the warehouse has been renovated into a modern apartment complex.

The mural, like the warehouse, represents Durham’s collision of past and present, rural and urban.

But the warehouse’s evolution nearly came to a halt in 2011, when a rainstorm collapsed part of the roof, dooming efforts to preserve the building as a historical landmark and forcing its artist tenants to move on. The Liberty Arts foundry, around the corner in Durham’s Central Park, is a reminder of the crucial role that the warehouse has played in Durham’s art community, as is Major, the bull statue forged in the warehouse that’s since become a symbol of the city’s downtown revival. He’s in Quarles’s mural, standing beside three men inspecting tobacco pallets. The broken roof is part of the mural, too, represented by stark beams reaching up to an empty sky. “This is the idea,” Quarles says, pointing to the row of beams in the painting. “This part collapsed, and then it began something new.”

The Liberty Warehouse mural faces the inside of a courtyard, and people often ask Quarles why his work isn’t more visible from the outside. He wonders if, at the rate Durham is growing, there might be another new building across the street in 10 years, attracting more people who might benefit from his condensed history lesson. For now, it’s seen mainly by the residents of the Liberty Warehouse apartments, many of them newcomers, like Quarles once was. They will never smell the tobacco he heard so much about. The mural might be the closest they come.

About a mile south, just over the train tracks, sits the country’s first all-brick tobacco factory: the Old Bull building, its red neon sign still lit as a beacon in the night. It’s part of the enormous American Tobacco Campus, once home to a company so large that it was broken up as a monopoly in 1911; by the end of that century, the operations would move out of town. But in 2008, American Tobacco got the second chance that Liberty Warehouse’s advocates wanted, when the property reopened as a wonder of urban reuse, home to a public radio station, tech startups, restaurants, a YMCA, and — inevitably — luxury apartments.

Unlike Liberty Warehouse, most of the original American Tobacco structures remain. No mural is needed to remind its occupants of Durham’s past, though Quarles says he has discussed painting one. In 1930, 1.75 million cigarettes left those buildings each month. Today, signs all over the American Tobacco Campus warn, “This is a smoke-free environment.” But the original bricks remain — and they remember. 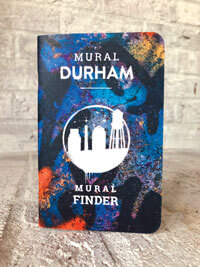 Durham is embracing public art in a big way. Colorful paintings are popping up all over downtown — on old brick warehouses, inside a parking garage, and even on abandoned satellite dishes — thanks to Mural Durham, an organization of local artists and community partners. Information about artists and mural locations is archived on muraldurham.com, and a mural finder is available at the city’s visitor center. There’s also a free bike tour of the mural sites, starting at 10 a.m. in Durham Central Park on the first Saturday of each month, May through November. — Sophie Shaw