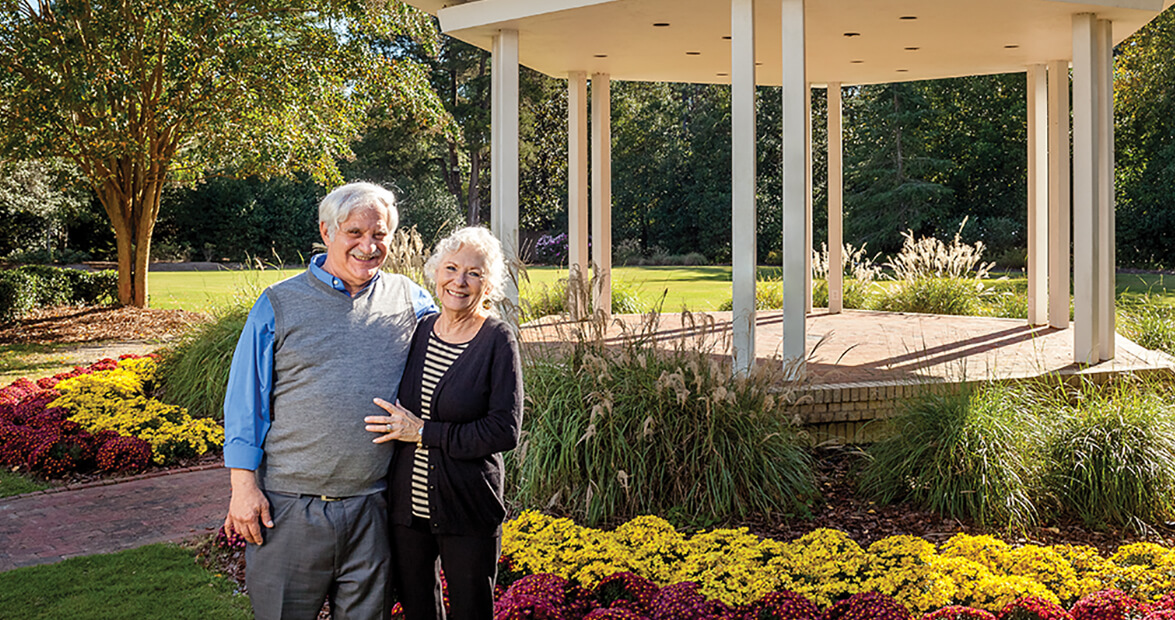 Plenty of golf bags are being toted through the spacious lobby of The Carolina Hotel at the Pinehurst Resort, but the bag draped over Lynda Sebo’s arm isn’t among them. Hers is a garment bag, the same bag — red, embroidered in black thread with her then-initials, LW — that she brought to the hotel in the early ’70s, when she was Lynda West, and singing every night for Arnold Palmer, Jack Nicklaus, and the rest of the era’s most famous golfers.

Lynda, who’s petite, with white hair falling in curly tendrils, gestures to the bag, which holds a change of clothing. “He likes me in black,” she says softly. “He” would be Paul Sebo, mustachioed and equally white-haired. Likes her in black then or now? one might ask, and the answer would be “both.”

Lynda is 68. Paul is 74. They’re standing in the 115-year-old hotel where they met, worked in show business, fell in love, parted, lost one another for 37 years, and then got married.

Two blocks from a roundabout, the grand bastion of Pinehurst Resort, The Carolina Hotel, looms above a boxwood hedge that spells PINEHURST: multistoried, white, red-roofed, copper-cupola-ed. The porte cochere, bustling with porters, is wide enough to accommodate four cars — and free shuttles to golf courses, shops, and sites around the resort.

And yet the stately impression isn’t imposing. I suspect it’s the porches, known here as verandas: wide and wraparound, where guests read, relax, and people-watch from dozens of white rocking chairs. In the warm, buttery, late-afternoon light filtering through dangling ferns, guests nibble popcorn and sip ’ades, juleps, and other libations from the Ryder Cup Lounge, just inside. The lounge’s signature dishes — Sandhills Peach Salad, shrimp and grits — are served in clubby-kind-of-busy rooms with two bars and two-top cocktail tables and leather chairs. In photographs and on televisions, people are playing golf. 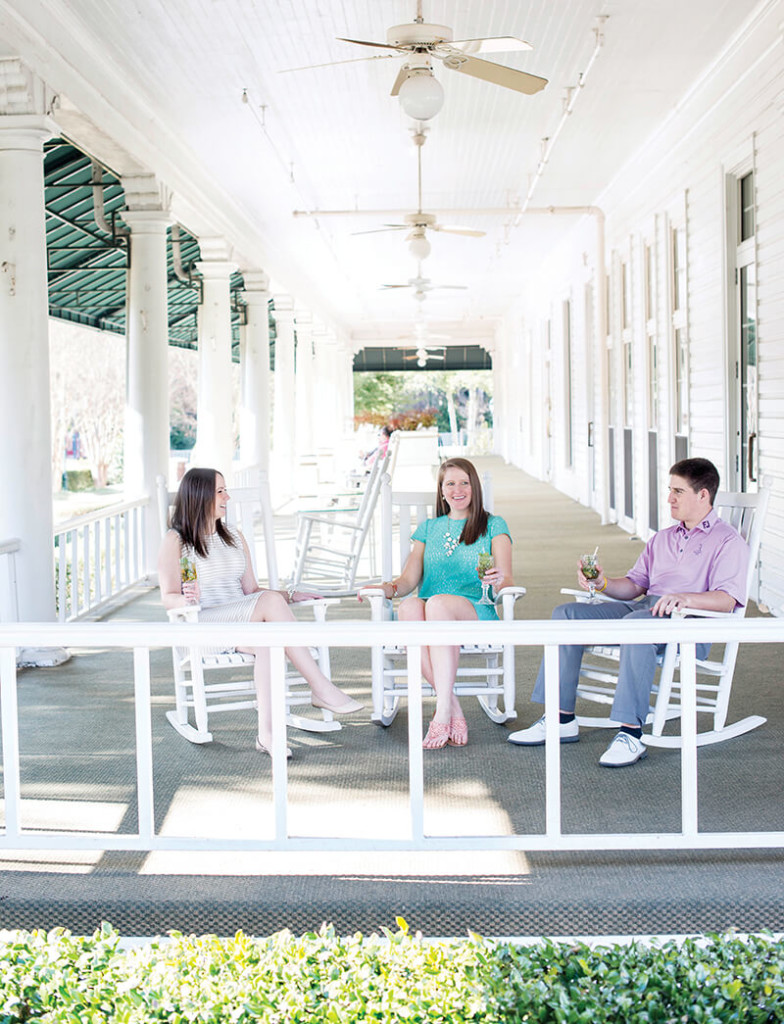 Pull up a rocking chair and sip mint juleps on the porch of The Carolina Hotel. Photograph by Lissa Gotwals.

In the early ’70s, the space wasn’t the Ryder Cup Lounge at all. It was the Bounty Room, and 25-year-old Lynda West sang country, standards, and pop hits from the raised and bona fide bow of a ship. She was from North Carolina, and 30-year-old Paul Sebo, who was born in New York, had been hired to provide entertainment five nights a week (no Sundays or Mondays) at the resort.

She’d run from the stage in the grand ballroom, where Burt Massengale and his orchestra were performing, to the Bounty Room and back, as the various combos and backup musicians and orchestras were taking breaks, Paul says. “Jeremiah Was a Bullfrog” was big, as was “Tie a Yellow Ribbon.” “I never, ever want to sing ‘Proud Mary’ again,” Lynda says of the ’60s and ’70s hits people clamored for and danced to.

The hotel’s vibe is casual — daily attire is golf shirts and shorts — but “vibe” is hardly a term that would be used here. The architecture and grounds, decor and style — the overall effect of The Carolina Hotel — is more one of class and charm and timelessness. Tea is served every afternoon at 4 o’clock. A horse, garlanded with flowers and drawing a carriage, clip-clops casually up the driveway. Somewhere, someone is playing golf on one of the resort’s nine courses, so many that they’re simply referred to by numbers instead of names, with designer Donald Ross’s “No. 2” being the most famous. Someone’s also playing golf at St. Andrew’s, in Scotland, and lest you forget, a lobby clock tells you what time it is on the storied links across the Atlantic.

Ask performers — actors, a band, the backstage crew — and they’ll tell you of the camaraderie and intimacy that develops among them. When the lounge closed for the night, Paul, Lynda, and the musicians would head back to Greensboro. They’d eat a late (or very early) breakfast at Waffle House, and do it all over again the next evening. Paul and Lynda fell in love. And yet, eventually, “She ditched me,” Paul says. Half-demurely, half-mischievously, Lynda nods a confirmation.

Moral of this story:
Do not dismiss social media.
Do not give up on forgotten love.

A long, carpeted, columned, and chandelier-hung hall bisects the main floor of the hotel. Its walls are covered with display cases of antique clubs and designs by Frederick Law Olmsted — of Biltmore Estate and Central Park fame — for the village of Pinehurst and the hotel itself. Here, too, are sepia-toned and black and white photographs of people riding horses or playing tennis; the dairy herd and ballroom dances. But mostly, the hotel’s hallway walls — and suites and rooms and restaurants and even restrooms — are hung with pictures of people playing golf. In knickers and in tournaments. Standing on greens, swinging in fairways, and posing with trophies.

The spa has a lap pool, fitness center, 28 treatment rooms, and 50-plus treatments to help you relax, if the rockers or the retail therapy don’t. A life-size chess set, pool, tennis courts, putting green to piddle around on, croquet, and other diversions are offered daily.

One day, Lynda’s daughter, Jennifer, a singer herself, wanted to know the words to a song called “Streetwalker.” It’s been more than 30 years, and Lynda can’t recall them. “Ask Paul,” her daughter suggests. “I’ll bet he’s on Facebook.” Indeed he is, but when Lynda’s post appears on Paul’s screen, he suspects a scam. After all these years?

So Paul, who by now has been unmarried for 15 years and has a daughter himself, poses a question only Lynda will know the answer to: What was the significance of that song to your career? When she answers correctly (“I should have released it first”), he answers, too: “I loved you then, I love you now, and I always will.”

At Pinehurst, “Sebo’s Gazebo” is what Paul calls the charming structure where many a marriage has taken place. Lynda was the first person to ever perform on the newly constructed gazebo, on July 4, 1974, when she opened for José Feliciano. Four decades later, on December 13, 2014, Paul and Lynda were married there, returning, like homing pigeons, to the origin of their romance.

“Is this your anniversary?” a woman calls out as Lynda strolls toward the pool, skirting the gazebo.

As a matter of fact …

Moral of this story: Do not dismiss social media. Do not give up on forgotten love. Know that Pinehurst’s Carolina Hotel is the perfect place for romance.