A friendly cacophony of musical notes and laughter floats over the grass in Charlotte’s First Ward Park as a father and his two sons discover how to plant their feet just right on Balancing Act. This interactive public art offers three brightly colored wobbly discs that dare park-goers to find their balance and make their own song. Those who attempt are rewarded with musical notes that play from different sections on the discs — and a core workout.

“Public art is a way for people to experience art where they work, live, and play,” says Carla Hanzal, vice president of public art for the Arts & Science Council, which administers Charlotte’s and Mecklenburg County’s public art programs.

First Ward Park is a good place to start your public artworks journey, but there’s much more to see, too, from a dazzling wall of hearts to billowing aluminum clouds. Want to get in on the fun? Here’s our guide to the Queen City’s best public art pieces and where to find them.

According to Hanzal, Balancing Act is one of a kind. “It was created specifically for the park and there’s no other work like it in the U.S.,” she says. “If you perfectly balance in the middle of one of the three discs, it will play a tune, or you may walk around the perimeter of the disc and play individual notes. If others are on the adjacent discs at the same time and also balance perfectly, they play a tune together in harmony.” 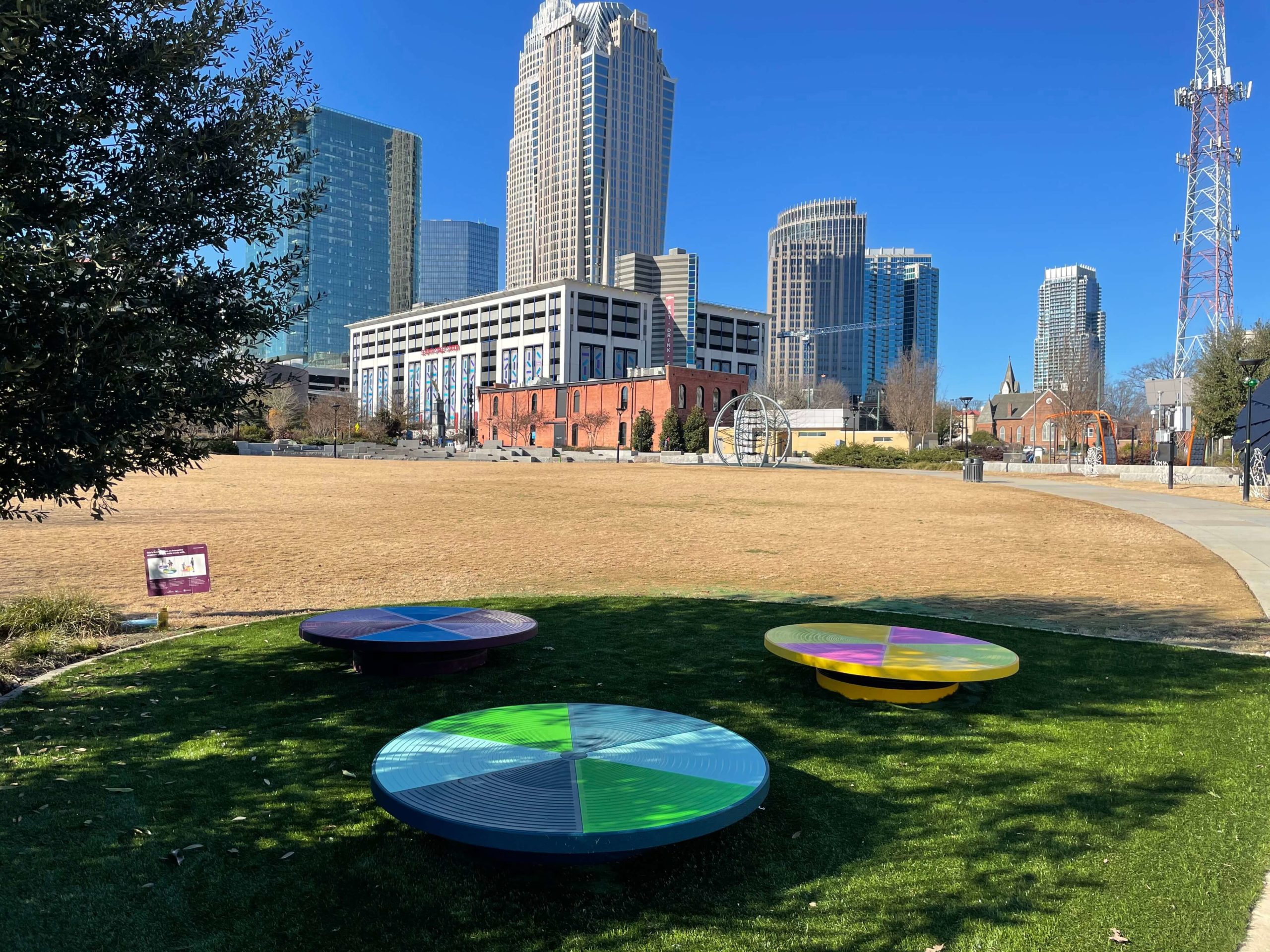 Balancing Act is a one-of-a-kind piece and was created specifically for First Ward Park. photograph by Todd Stewart

Designed by Canadian art and design studio Daily tous les jours, the interactive installation is colorful, accessible, and fun. Each interaction creates a unique song as people of all ages discover where their balance lies.

Gleaming, reaching, and swirling toward the sky, sculptor Richard Hunt’s Spiral Odyssey brings hope rooted in history to Uptown Charlotte. The 30-foot tall, highly polished stainless-steel sculpture is an homage to artist Romare Bearden and the “Spiral Group,” a collective of African American artists that was active during the civil rights movement. Hunt also gleaned inspiration from Homer’s Odyssey, intertwining that fictional epic journey with the very real journey of Africans to America during the Middle Passage. 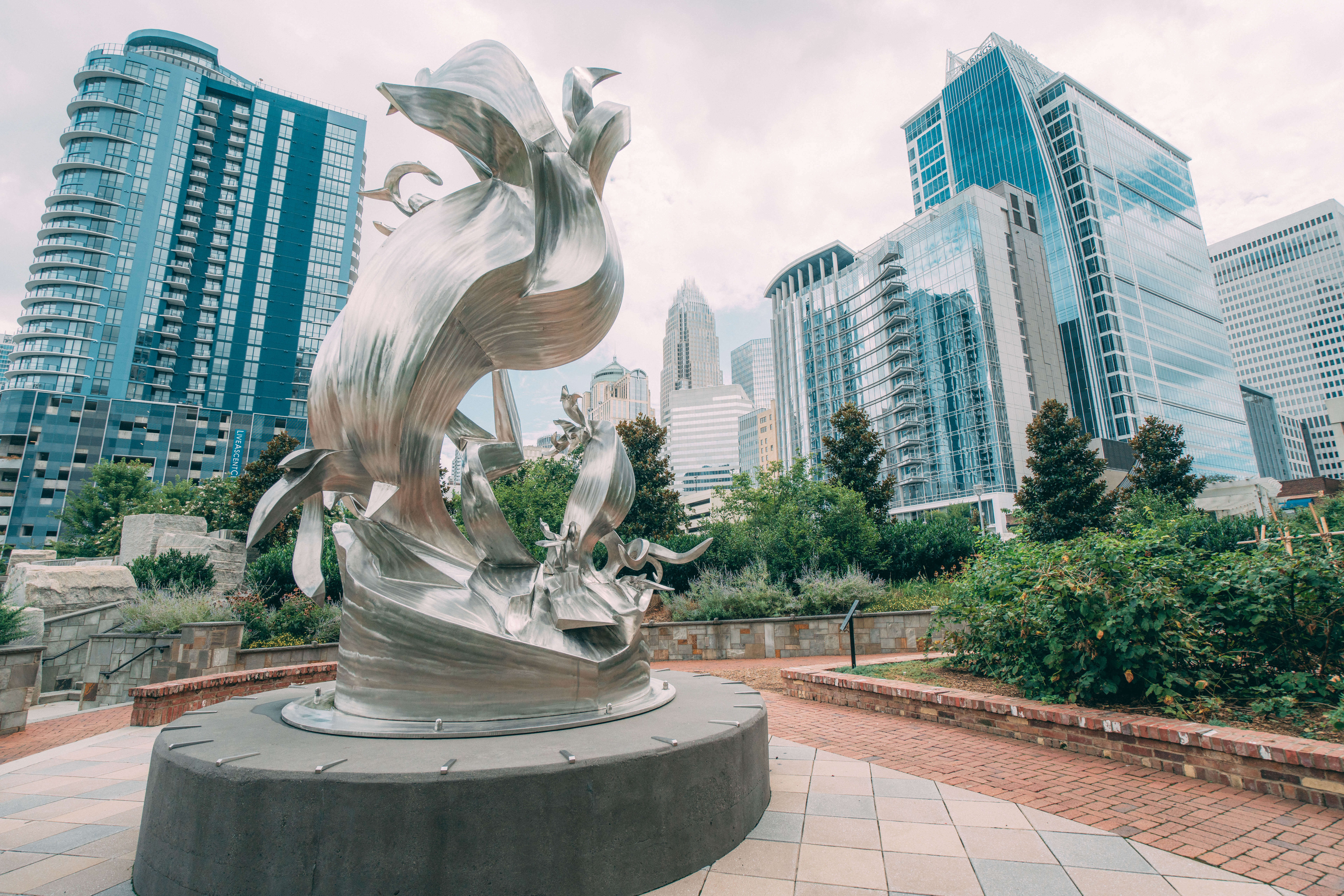 Spiral Odyssey is 30-feet tall and is an homage to artist Romare Bearden and the “Spiral Group.” photograph by Charlotte Regional Visitors Authority

“Though the piece is abstract, it’s a symbol for how the efforts of the civil rights movement became more visible, and Black Americans’ rights were recognized within the U.S.,” Hanzal says.

Spiral Odyssey conveys the beauty and fortitude required of transition, leaving visitors with wonder for what will come next. 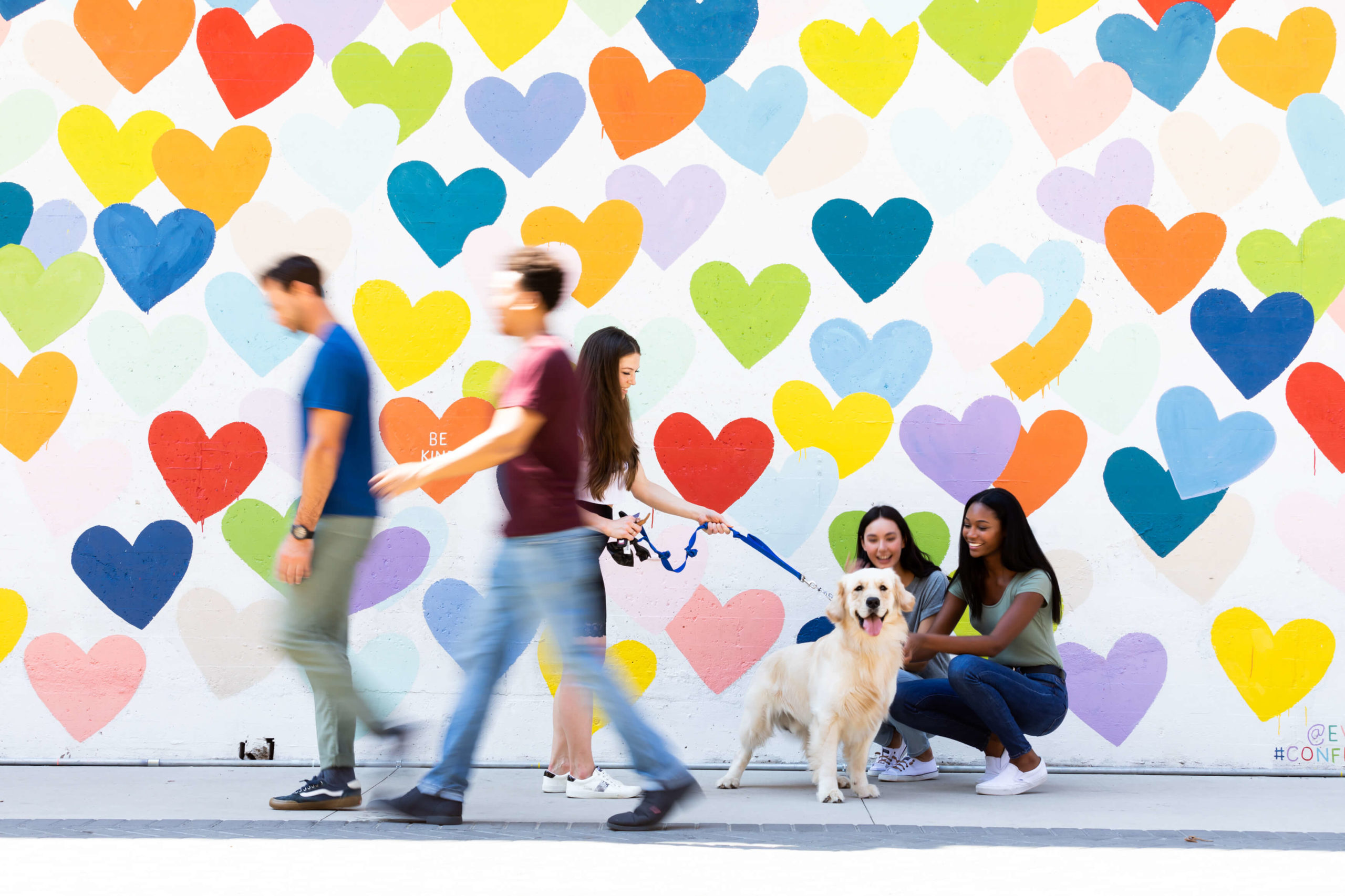 “When you put public art into the world, you’re allowing pedestrians to walk with art in their everyday life and receive those cognitive and emotional benefits that they wouldn’t normally get access to,” Henson says.

A few of the bright hearts include simple, encouraging messages from the artist. “Be kind, do good, love others — the lettering drives home the message that every small act of kindness is like a heart on the wall,” Henson says. “If you just have one [heart] it may look insignificant, but when you put them all on the wall, they add up to something big, bright, and beautiful.”

A Tribute to Black History

Across the Queen City, a series of murals pay tribute to important events and figures in Black culture. These murals tell the stories of struggles and triumphs of communities, while promoting pride in cultural identity. With every brush stroke, this public art has the power to transcend time, often unfolding and elevating the stories they tell. 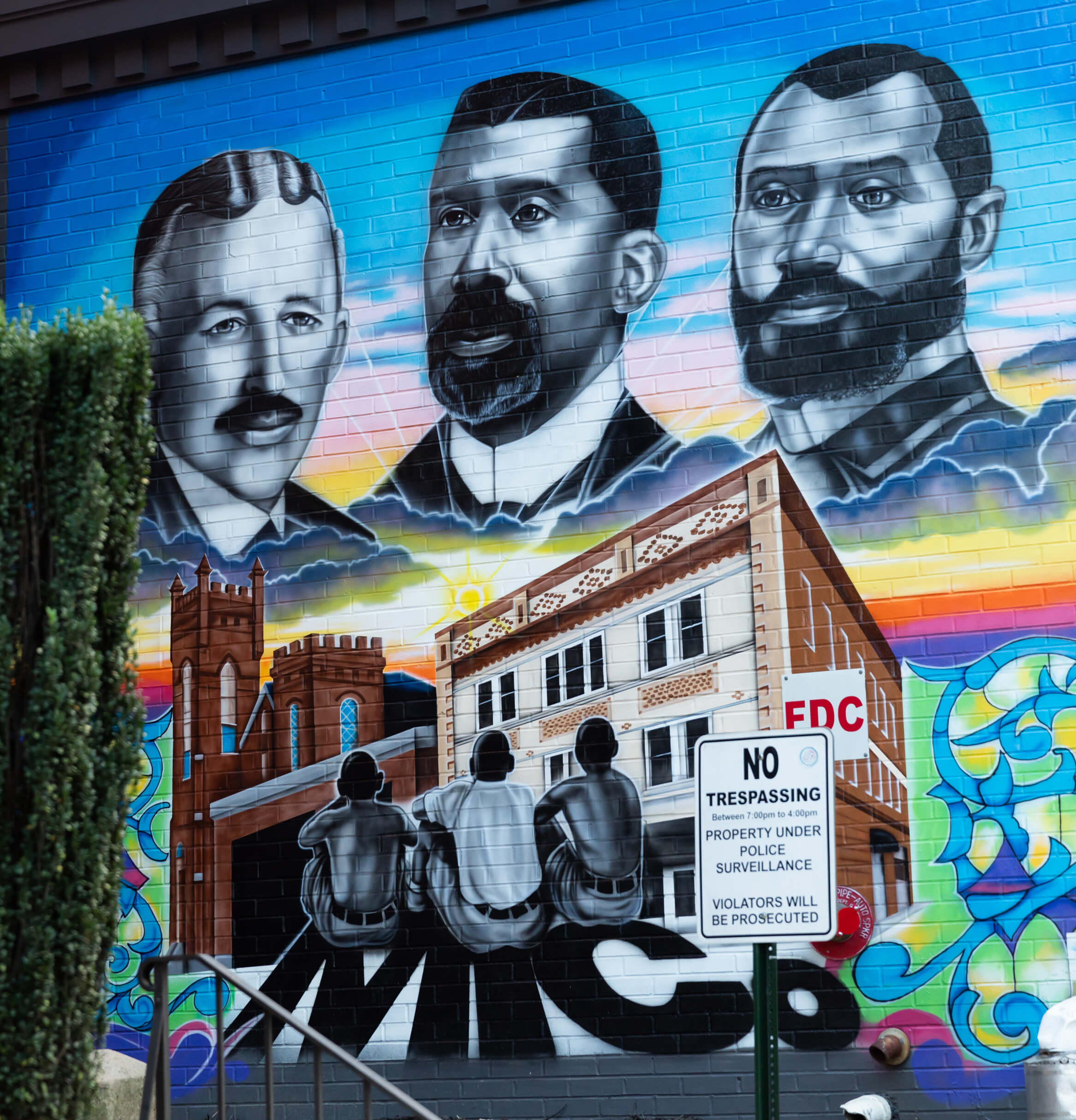 Across the Queen City, a series of murals pay tribute to important events and figures in Black culture. photograph by Charlotte Regional Visitors Authority

Make your first stop the Go, Tigers! and We Too, Shall Rise murals created by artist Tommie Robinson at Second Ward High School, Charlotte’s first public high school for African American students. Then visit Historic Brooklyn by Abel Jackson at 219 South Brevard Street. Jackson’s mural pays homage to the past while connecting to the future, depicting a younger generation looking up to the leaders and founders of the Brooklyn neighborhood. Another of Jackson’s murals, The Great Escape is on display at 1635 West Trade Street. And on 1600 West Trade Street, Jackson collaborated with artist T’Afo Feimster to pay homage to eight influential Black North Carolina musicians, including Nina Simone, Roberta Flack, and John Coltrane.

Don’t miss Strange Fruit by Dammit Wesley, at 345 North College Street. “My mural is named after Billie Holiday’s record “Strange Fruit,” recounting the experience of seeing Black bodies in the South hanging from poplar trees,” Wesley says. This mural is a reminder of those lives lost and a harsh history that has been swept under the rug.”

A surreal dream of aluminum clouds billows in front of the Valerie C. Woodard Center. Pillars of Dreams is comprised of 5,000 thin aluminum components and 10,000 rivets that create an ethereal 3-D jigsaw puzzle canopy where sky and shadow convene.

The artist Marc Fornes, a forerunner in computational design, intentionally created Pillars of Dreams Plaza as a restful place for reunion and reflection. “It’s really meant to be experienced,” Hanzal says. “As you go beneath the canopy and look up through the perforations, you see the sky above and it changes into a beautiful violet color because of how the sculpture plays with light and shadow.”

Also worth a visit is Fornes’ Wanderwall at 400 East Stonewall Street. The 18,000-foot sculpture — named one of Public Art Network’s 50 best public artworks of 2018 — blends architecture and art to create a colorful façade for a parking deck that can be seen from nearby Highway 277 and those who walk and take notice in Uptown.

In Stillness a Seed of Hope is Planted, 201 Rampart Street

Artist Nick Napoletano’s murals are prolific in Charlotte, but one of his most recent is particularly poignant in these extraordinary times. Designed in 2020 to honor hospitality workers impacted by the COVID-19 pandemic, the idea for the mural in South End began with a quote, “In stillness a seed of hope is planted,” that he painted to surround the hopeful face of a child like a halo. 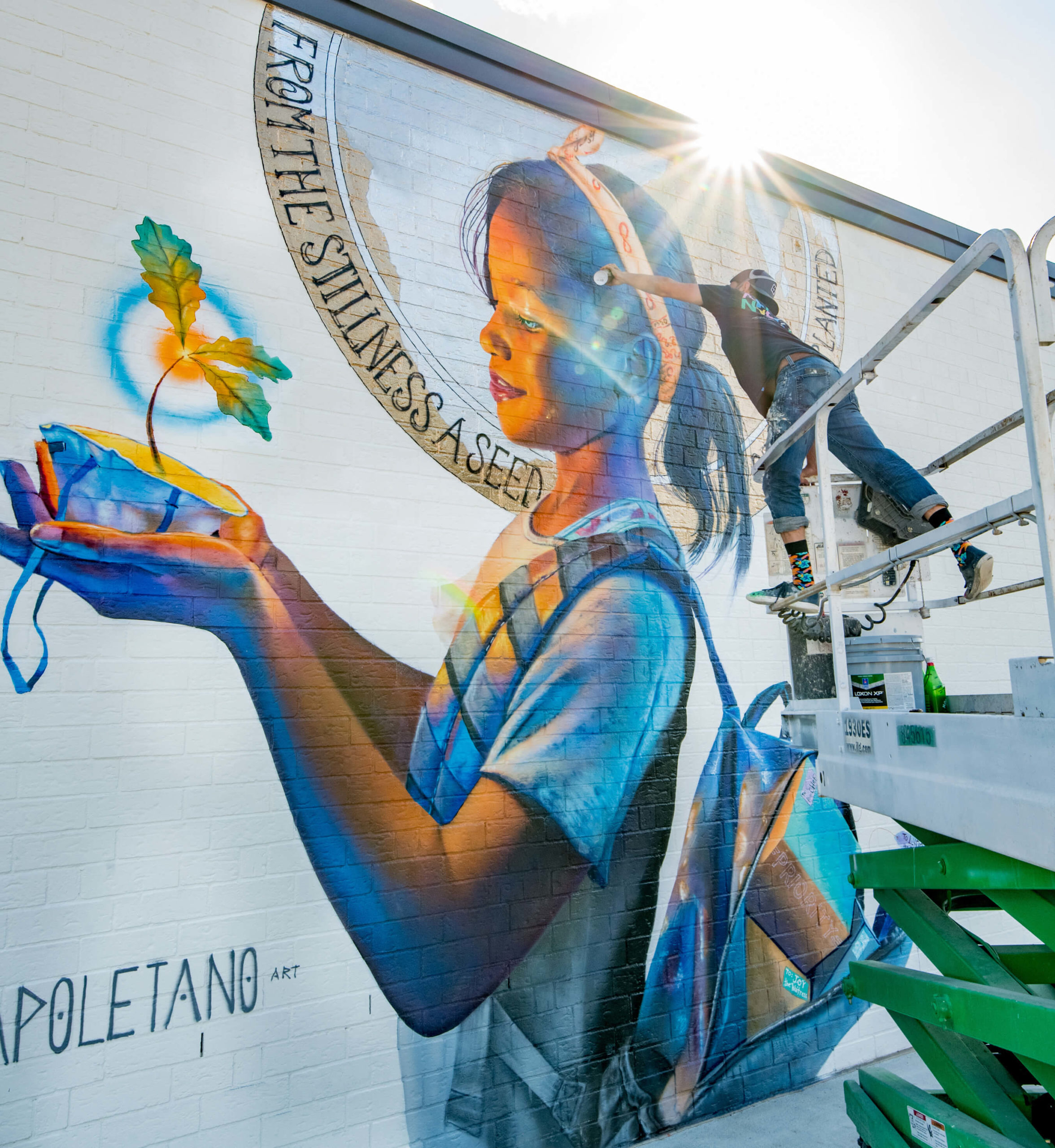 “The mural is meant to allow people to see themselves in another person’s experience, though a child’s eyes, and look at things with innocence, understanding, and empathy,” Napoletano says.

Next, make a trip to Red Clay Ciderworks to view Napoletano’s 2020 Vision, Devil’s Logic Brewing for a play on Plato in Woman of Truth, and midtown Charlotte to the steps in front of Dressler’s for Portal.

“Charlotte’s a magical, beautiful place that can be a sanctuary for everyone,” Napoletano says. “I want my work to incite conversation that expands people’s hearts and minds.”

Pop art, murals, and three-dimensional sculptures brighten the 3.5-mile Rail Trail, which connects the north and south end of Charlotte alongside the Light Rail’s Blue Line. The walkable path takes pedestrians by businesses, restaurants, and views of the city, rewarding them with engaging public art such as the Color Forest north of Bland Street, which adorns both sides of the trail with a series of 8- to 12-foot steel poles in vibrant colors.

“The Rail Trail is a livable piece of public art that lets you walk with art and the city,” says Vica Bondurant, vice president of marketing and communications for Charlotte Center City Partners, a leader in the cohort developing the trail. “It’s uniquely growing and changing with the city and provides an artery of vibrancy throughout the neighborhoods.”

Some of the Rail Trail’s most popular public art includes the Giant Exclamation Point (2173 Hawkins Street), three Magic Carpet Murals (MLK Blvd at 301 S College Street; 2151 Hawkins Street; and 2833 Griffith Street), and the Rail Trail Chalkboard (East Kingston Avenue), which asks trail users to complete the sentence, “Before I die, I will …” Be on the lookout for temporary installations like the “I Heart the Rail Trail,” coming in early spring 2021.

When the City of Charlotte and Charlotte Regional Visitors Authority asked residents to share their memories at Bojangles Coliseum and Ovens Auditorium, their recollections inspired artist Blane de St Croix’s installation. The finished piece, which ties into the iconic dome, features the names of performers and events who have been part of the venues’ 65-year legacy. 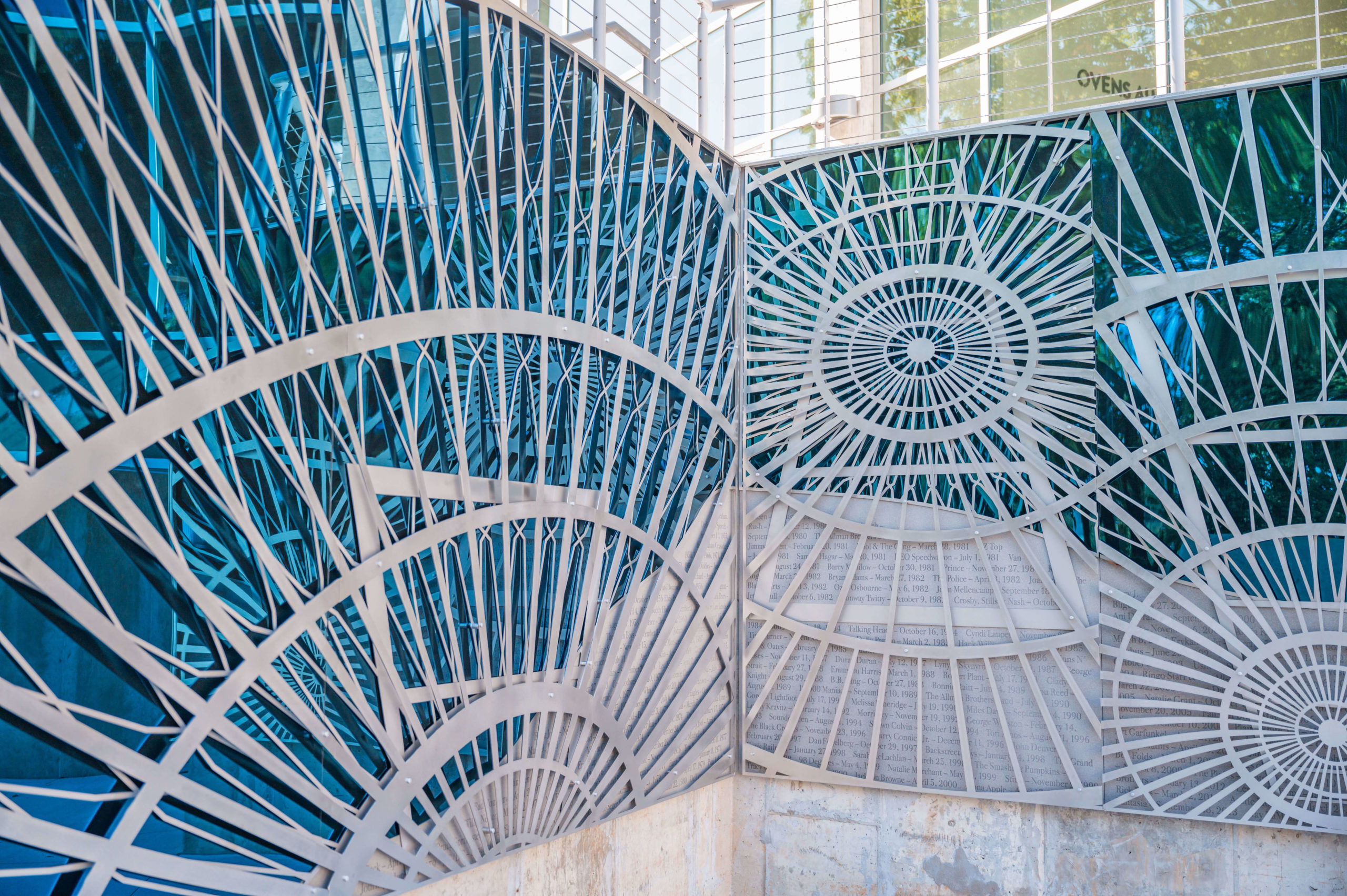 Blane de St Croix’s installationf eatures the names of performers and events who have been part of the Bojangles Coliseum and Ovens Auditorium’s 65-year legacy. photograph by Charlotte Regional Visitors Authority