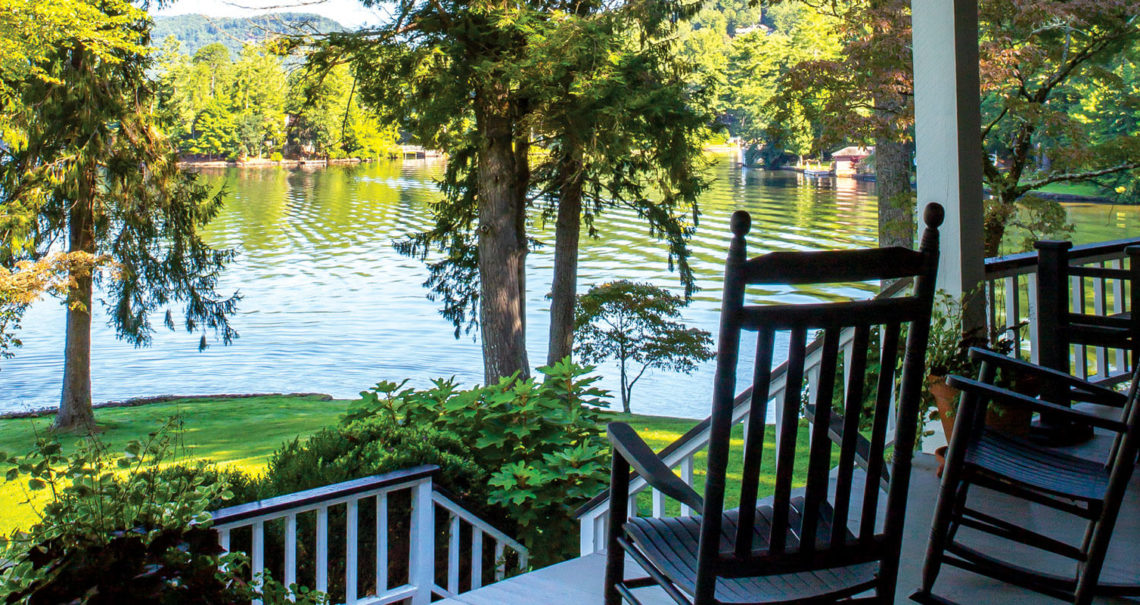 John L. Nichols III would give anything to know the whole truth about this porch, his porch, wide and unscreened, its floorboards painted a light gray. On his porch, a coffee table — big enough for six pairs of feet hoisted from two wicker couches — is laden with boxes containing documents, postcards, and photographs from Lake Toxaway’s history. But no deed or drawing attesting to the house’s original build date exists. Nothing but an interior board etched with the date 1896. 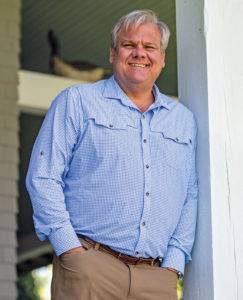 Well, makes sense. The Toxaway Company was formed by Pittsburgh businessmen in 1895, eventually encompassing 30,000 acres clear over to Cashiers, as well as what would become Lake Toxaway when the man-made lake, with its earthen dam, filled up in 1903. Nichols believes that the house he and his family live in served as an office and a place to stay for Toxaway Company officials and the guests who they hoped would be inspired to buy lots after experiencing the stunning view from the porch. From its vantage point on a peninsula, the entire east-west border of Lake Toxaway and surrounding mountains are visible. Never mind the peaceful sound of water lapping at the stone seawall and other barriers that stretch around nearly every finger and cove of the 640-acre lake, with its 14-mile shore and 60-foot depth.

Vanderbilts, Fords, Rockefellers, Dukes, and Thomas Edison flocked to the Toxaway Inn, a luxurious, boomerang-shaped hotel erected a few hundred yards from this porch. The inn offered a splendid social life, as well as boating, swimming, and shooting. Evenings, an orchestra played on a little island that guests reached by bridge.

Then, on August 13, 1916, the dam broke beneath torrential rains, releasing five billion gallons of water. Famously, fortunately, the only casualty of the flood was a blind mule. And the lake itself. In mere hours, what had been a playground for the rich and famous became a mud pit. Visitors, needless to say, vanished along with the lake.

For 44 years, Lake Toxaway was forgotten. The stately, abandoned Toxaway Inn, its dining room tables still set with linens, was torn down in 1947 to salvage its valuable wood and other materials. Across the way, though, the magnificent porch and its house remained, overlooking a desolate landscape and a remnant rivulet of the Toxaway River. The Jennings family from Pennsylvania, who owned the house, created a life estate of it, allowing local folks to live there. One was Tolvin Miller, a former carpenter and handyman at the Toxaway Inn, who moved his family into the house — and onto that porch — while he served as caretaker of the property.

Then, in 1960, John Nichols’s grandfather Reginald Heinitsh of Columbia, South Carolina, bought the acreage around the lake with Darnall Boyd and other investors. They cleared the lakebed and rebuilt the dam, and, sure enough, the water rose to its original level. Nichols’s parents moved to Lake Toxaway in 1968, taking up residence in the attic of a home built just a year before the flood and that today is the Greystone Inn. Nichols was born in 1969, and he spent his childhood on the lake, working jobs at the Greystone, then at the marina. 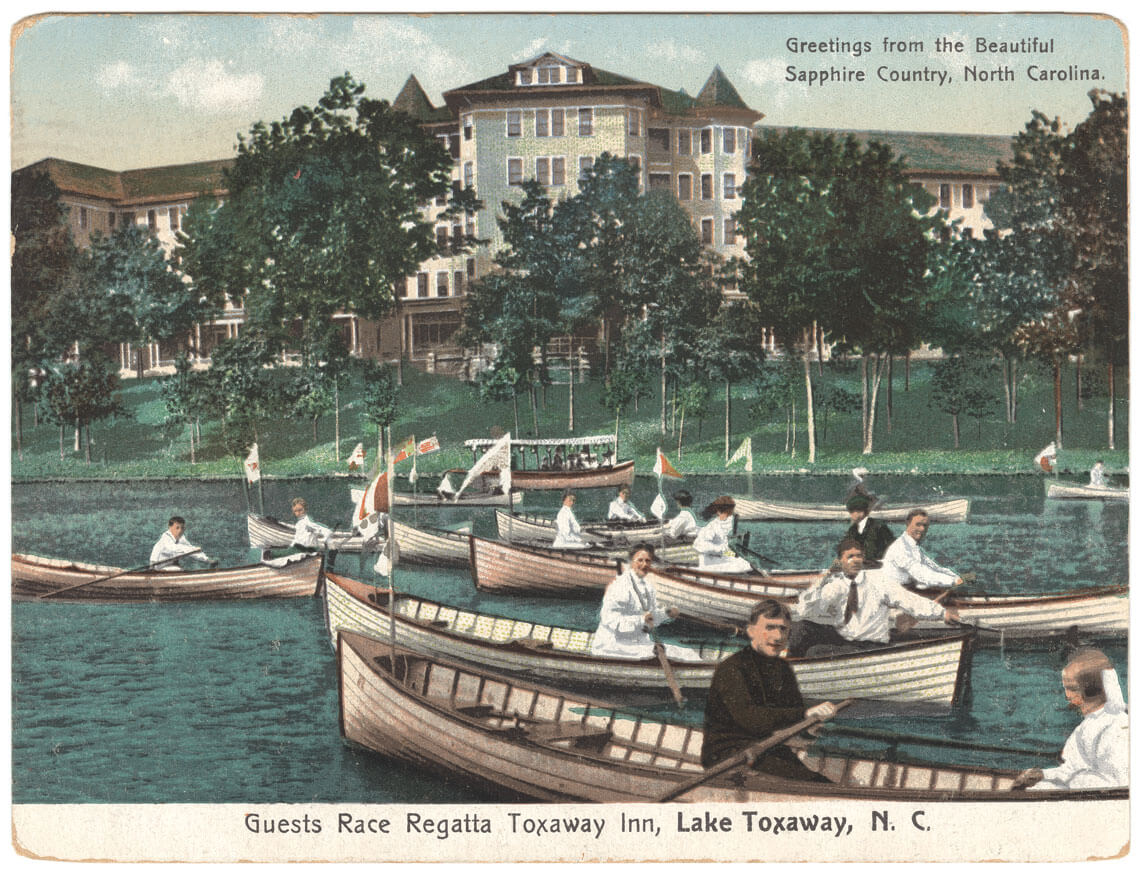 In its first incarnation, before the dam broke and the lakebed dried up, Lake Toxaway was a playground for guests of the Toxaway Inn, shown boating in a regatta in this 1907 postcard. photograph by The Durwood Barbour Collection of North Carolina  Postcards (P077), North Carolina Collection, Wilson Library, UNC-Chapel Hill

In 1972, Nichols’s parents purchased the house from the Jennings family. Nichols bought his sister’s share of the property in 2015. Two years later, he and his family left Charlotte to live permanently at Lake Toxaway.
And who can blame him? The four-bedroom house, with its cedar-shake siding, 12-foot ceilings, and original wavy-paned windows, is beautiful. Still, it’s no mansion, like the many modern lakeside estates occupied by executives of Coca-Cola, Home Depot, and Marriott. But oh, the porch, where, beneath high ceilings and deep overhangs, most of the living clearly happens. To one side of the center steps leading to the porch, a row of rocking chairs and a joggling board overlook the tree-shaded slope to the water; on the other, armchairs and those wicker couches large enough to sleep at least two. Down the side, near the original stone chimney, there’s ample room for a fancy grill, a bar, and other entertaining accoutrements. Only the third side of the porch has been renovated — before Nichols’s time — to enclose a portion as a small den, and to screen a section where, nowadays, the Nicholses eat meals outside. Nearby, the family keeps a pet flying squirrel whose name, Rocky, will strike a chord for anyone of a certain Saturday-morning-cartoon era.

Evidence of the three Nichols children, ages 10, 13, and 14, is everywhere on the porch and the shore: in the damp towels dropped on the grass and fresh rolled ones on a wrought-iron shelf beside the big, old, screened, slap-in-the-middle front door; in the mallards they’re raising; in Charlotte the Weimaraner, sprawled on the cool floorboards; in the treehouse just down from the porch, built crow’s nest-style around the trunk and constructed with locust posts, a hard, impervious-to-rot wood found on docks all around the lake.

Oh, the porch, where, beneath high ceilings and deep overhangs, most of the living clearly happens.

The family spent one chilly winter on the lake before realizing that their 1896 summertime cottage wasn’t exactly designed for cold weather. They reinsulated the house, and now they stay there year-round, comfortably. Does the lake ever freeze? “Oh yeah,” Nichols says. “We’ve thrown golf balls from the porch, and they bounce all the way across the lake.”

A heron glides past. Sunlight glints off the water. “I think this porch, and the house, was a model for the Toxaway Inn,” Nichols says. “Same tongue-and-groove ceilings, same cedar shakes, same wooden decking.” The amateur documentary filmmaker, who commutes to Charlotte and his commercial real-estate business, sifts through a collection of photographs. Here’s a shot from 1971, when, of course, the porch was outfitted with the decade’s familiar aluminum-and-webbing lawn chairs, a Bentwood-style rocker, and bouncing metal armchairs. Here’s a panoramic photograph, long assumed to have been taken from the porch, that’s also housed in the Library of Congress, and two black-and-white pictures of a desolate landscape taken after August 1916, bearing tragic, handwritten captions: “When the dam went out” and “Same thing.”

But this porch’s history has a happy ending. When caretaker Tolvin Miller’s elderly granddaughters stepped back onto the porch of the house where they’d lived for all those years, both began sobbing. “Crying and crying,” Nichols says. In all their time on this porch, the sisters had looked at nothing but the scrub growth overtaking an empty lakebed. Now, they looked out and saw the real thing: Lake Toxaway. Their tears were of wonder and joy. Nor was the happiness only theirs; when the pair identified landmarks — a boathouse, a rock gazebo — on a sepia panoramic, Nichols knew for certain that the historic photograph had been taken from the porch he was standing on. 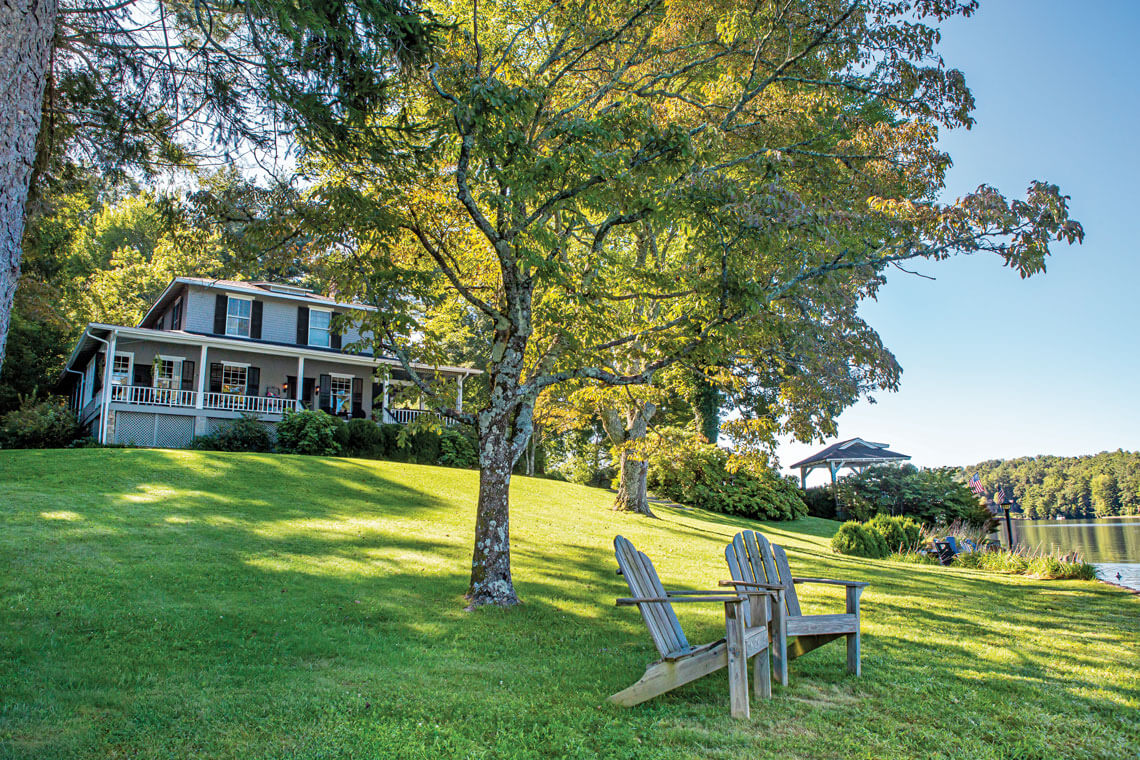 The 1896 house on Lake Toxaway isn’t just a relic of the past — the Nicholses and their three children fill the old property with joy and life. photograph by Tim Robison

Nichols is making a documentary about Lake Toxaway, but he has yet to complete it — “because the story isn’t over,” he says.

Indeed. Recently, members of the Historic Toxaway Foundation gathered on the porch. Its gracious depth and wraparound length easily held the 150 guests as they leaned against columns and gazed beyond its railing to watch the sun set over Toxaway Mountain, behind which is mostly state or national parkland. They sipped and chatted and stood on the same porch where, once, decisions were made and deals were brokered, where folks have long sipped and chatted and watched the play of light across placid or waving water beneath bare rock and tree-covered mountain faces.

Just a year shy of its 125th birthday, this porch has overseen a lake filled, then spilled, and refilled — like dreams themselves. Relax. This is a porch with a lot of living yet to do, and a lot of history yet to make.