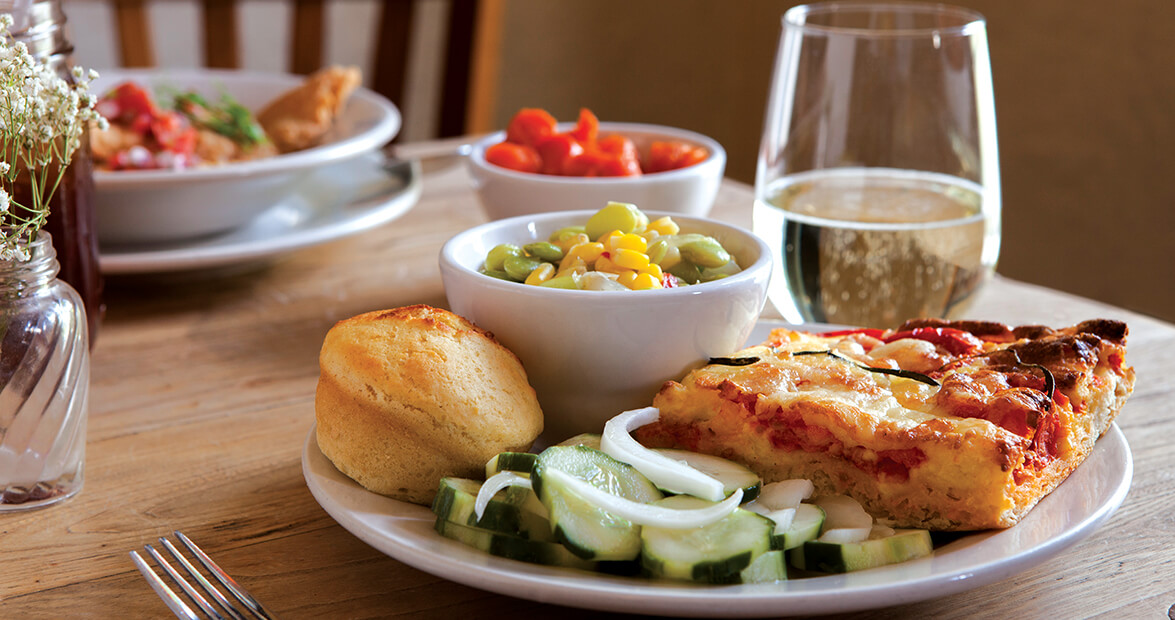 Fact is, it’s gotten to the point that you can’t swing an heirloom-strain, open-pollinated, non-GMO parsnip without hitting an authentic Southern revisionist chef these days. Don’t get me wrong. I’m a big fan of fine Southern fare. I know how to truss a quail. But some of what’s out there in today’s craze over über-haute hoppin’ John is a bit over the top, this hipster infusion of a meat-and-three. In many places, Southern cuisine is seasoned with a bit too much of the trying-too-hard, served with a side of affectation like a gloppy gravy of sanctimony. Your grandmother wouldn’t make such a fuss. Most of the time, collards don’t need reinterpretation.

Which makes Proper, in downtown Boone, such a breath of fresh air. Housed in a historic 1896 jailhouse — one of the oldest buildings in Boone — there are no fusses at Proper. This is an understated, unpretentious, stone-and-brick gem suffused with an easy elegance. And while Proper’s is a proudly meat-and-sides presentation, please understand: This is not Kountry Kookin’, either. It’s no throwback diner. If your grandmama was cooking Sunday dinner for the Queen — and had access to chipotle sauce — she’d come pretty close to what Proper pulls off day in and day out.

To understand Proper’s appeal, it helps to understand a bit about Angela Kelly, Proper’s chef and owner, and the author of the restaurant’s back-to-roots narrative. Kelly speaks softly and thoughtfully. There’s a sense of gratefulness about her. And earnestness.

Despite its history as the town lockup, Proper is homey. Timber beams, exposed brick, and whitewashed walls give the space a lodge-like feel. Paintings of mountain scenes liven up the masonry, but what really draws the eye are oversize portraits of Boone residents. Their faces double the human impact of the space. It seems as if the restaurant is permanently inhabited by folks you’d want to meet, with stories you’d like to hear. That’s an important message for Kelly. Proper is open seven days a week, for lunch and dinner (brunch only on Sundays), a decision Kelly made to underscore the restaurant’s place in the community. “We’re in a college town,” she explains. “We only have eight parking spaces. I want people to know that we can be counted on. That’s important to me.” 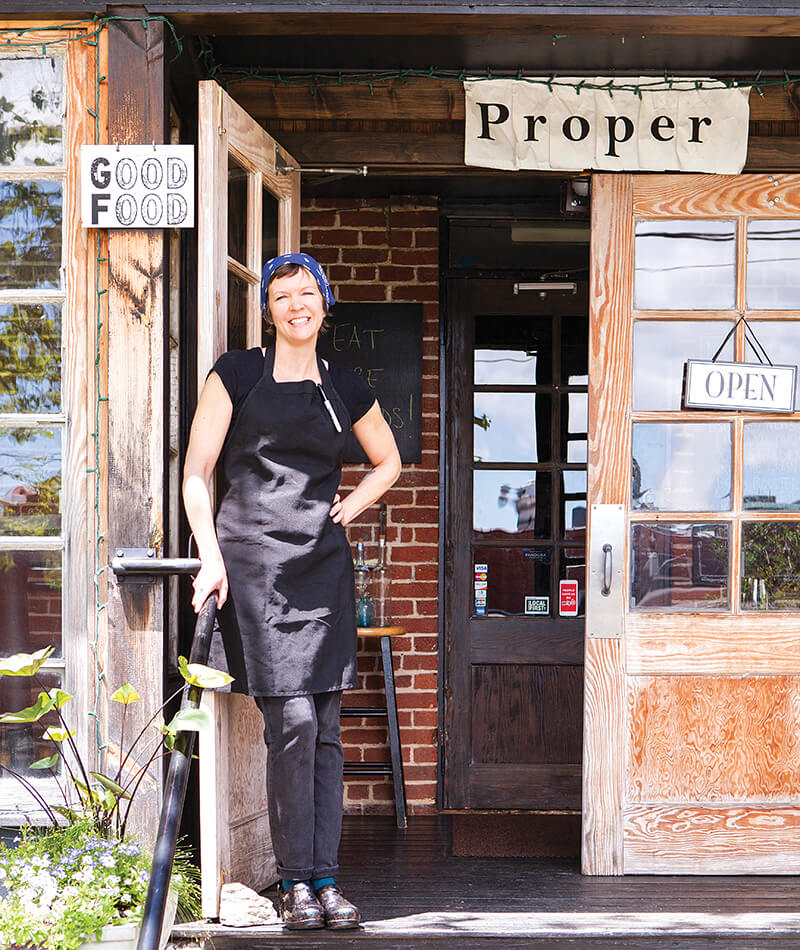 It’s important to Angela Kelly, chef and owner of Proper, to cultivate a welcoming space, inside and, in nice weather, outside, too. photograph by Cheryl Zibisky

Kelly grew up in Salisbury, where cooking was central to her family’s story. Both of her parents loved to cook, and any event — birthdays, holidays, get-togethers — was celebrated with a day of cooking stuffed macaroni. “The dough from scratch, the sauce from scratch, everything from scratch,” Kelly remembers. “We still do it.” She recalls the first time she realized that she’d inherited a gift for cooking. Kelly was 10 years old, alone in the kitchen, and created a marinara sauce from its essential ingredients — tomatoes, garlic, olive oil — and nothing from a can. “My sister never pulled punches,” she laughs, “and even she said it was good.”

The simplicity of very fresh, very good food should be enough to carry the day.

Kelly and her sister spent every other weekend with their dad, in the little mill town of Cooleemee. A fabricator with a military background, Kelly’s father was kind and loving, but he was not a wasteful man. He liked to get things done. “He would stand outside our bedroom first thing in the morning,” Kelly recalls, “and slurp his coffee and shake the paper to wake us up. I’m sure he thought he was hilarious, because we knew what was ahead of us once we were up. There were plenty of chores.”

After graduating from Appalachian State University, while knocking around in the kitchens of some of Boone’s iconic eateries, Kelly decided to put her talent and work ethic to the test. She signed a lease for the old jail and honed in on the enduring characteristics that had nurtured her own love of cooking. “I looked at restaurants that had stood the test of time,” she says. “Most of them fell into one of two categories: Southern food or barbecue. I’m from Salisbury, so I know Southern food. And back home you can’t turn around without seeing a barbecue joint. It was a pretty natural choice.”

A pretty natural choice: That’s how I approached my latest visit to Proper. For two days, I’d been set on the tomato pie, which had been my backup on other visits. Tomato pie, collards, and pickled beets. No need for a menu. I’d made up my mind. Then the waiter showed up, and the wheels came off the bus.

Proper’s menu is built on a foundation of favorites — pulled pork, meatloaf, fried chicken, fried catfish, and the like, plus as many as 16 side dishes. But most nights see impromptu specials — and we were in luck, our waiter announced, because his favorite dish was on deck: chicken thighs and lima beans braised in a chipotle barbecue sauce, served over rice, with two sides of my choosing. Tomato pie? Foiled again.

Even my choice of sides were thrown a curve. Earlier, Kelly had described her posole, a traditional Mexican chicken soup made with hominy. Hominy was common during her growing-up years, she says, but you don’t often find it on a menu. I hadn’t had hominy in better than a decade. Dang. It came down to beets or a reasonable upcharge for a third side. So be it: Make mine a meat-and-three. 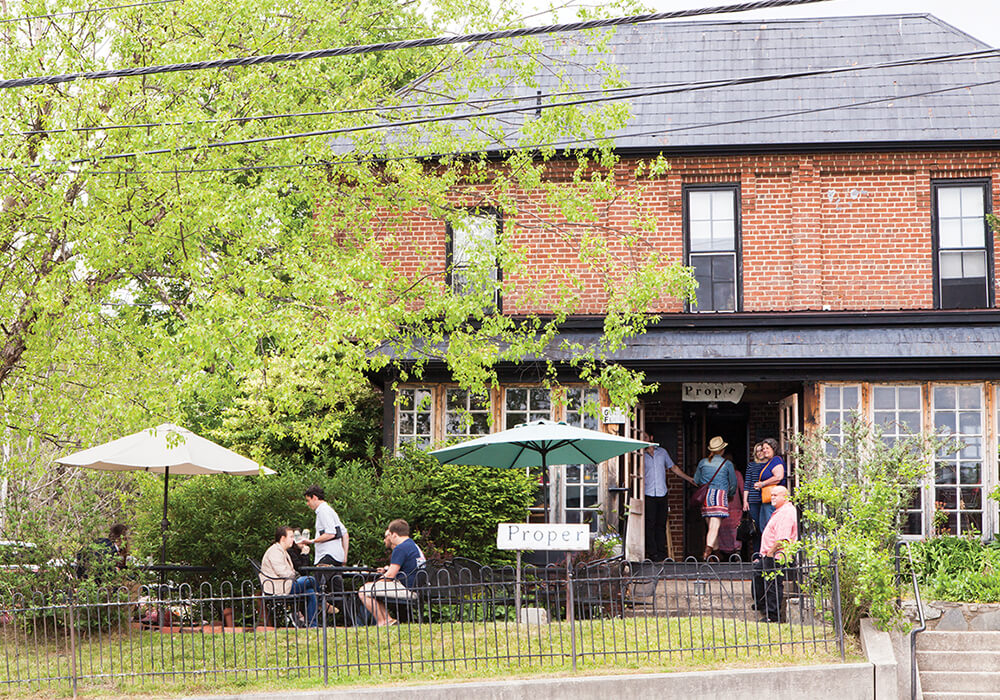 This idea of diners being able to design their own experience was appealing to Kelly. “I didn’t want people to come in and choose the pork chop but then have everything else decided for them,” she says. The downside of offering choice, of course, is that people tend to embrace it. “I hear it all the time: Oh my gosh, I can have two orders of mac ’n’ cheese! So maybe there’s a little too much choice involved,” she laughs.

It’s not that Kelly doesn’t like to color outside the lines. But getting folks to try things, she says, is “about relationship-building. I have to get people to trust me that we can do a good job with what they love before they’ll try something new.” In other words, she’ll talk you into stuffed poblano peppers with the best fried chicken available in the past half-century.

This is what Kelly meant earlier as she explained her approach. The simplicity of very fresh, very good food should be enough to carry the day. “Take our glazed carrots,” she says. “They are textbook. They are exactly what I wanted. I’m not saying that I don’t want our glazed carrots to be exciting,” she says. “They are very, very good. I just wanted it all to be as it should.”

There’s a word for such an unaffected — dare I say authentic — approach.