Love is the easiest thing in the world. When Mr. Harmon, whom I love, called me over from the early morning line at Cup A Joe on Hillsborough Street in Raleigh, which I love, and told me that he had just come back from seeing a hundred thousand snow geese with Tom Earnhardt, I said, “I love snow geese.”

Cup A Joe is just one of those places. It’s clean but never sparkles. A five-minute visit there is enough to steep one’s clothes with the smell of coffee for the rest of the day. Regulars cycle through by the hour, or day, or week. The retired professors in the front window take their seats early. The later-morning college crew sits in the main room and are young enough to have just heard of Jack Kerouac, young enough that going on the road themselves seems like a real possibility. The line of people who work in offices blooms and fades by 9. The neighborhood folks who don’t work in offices, the ones who assemble and hold court in the big side room, are usually gone by 11. Then there are the earphone-wearing, computer-staring workers, the business meetingers, the readers, the first dates, the last dates.

My husband saw me as he was driving past Cup A Joe 17 years ago and thought he might like to marry me. Now, our boys follow me in there most mornings, stopping to say hello to Dave, one of the owners, or the tables of the regulars that they love, many of whom we know only from Cup A Joe. Cup A Joe’s a place where you can fall in love like that, and a place where you can get the early morning gossip on bird migrations.

Mr. Harmon pointed to Tom Earnhardt, who usually sits in the front. He’s a legend among naturalists. He watches the world and knows what he observes. “You are going to be amazed by what you see,” Tom Earnhardt told me. “The sun setting will turn the birds pink and orange!” 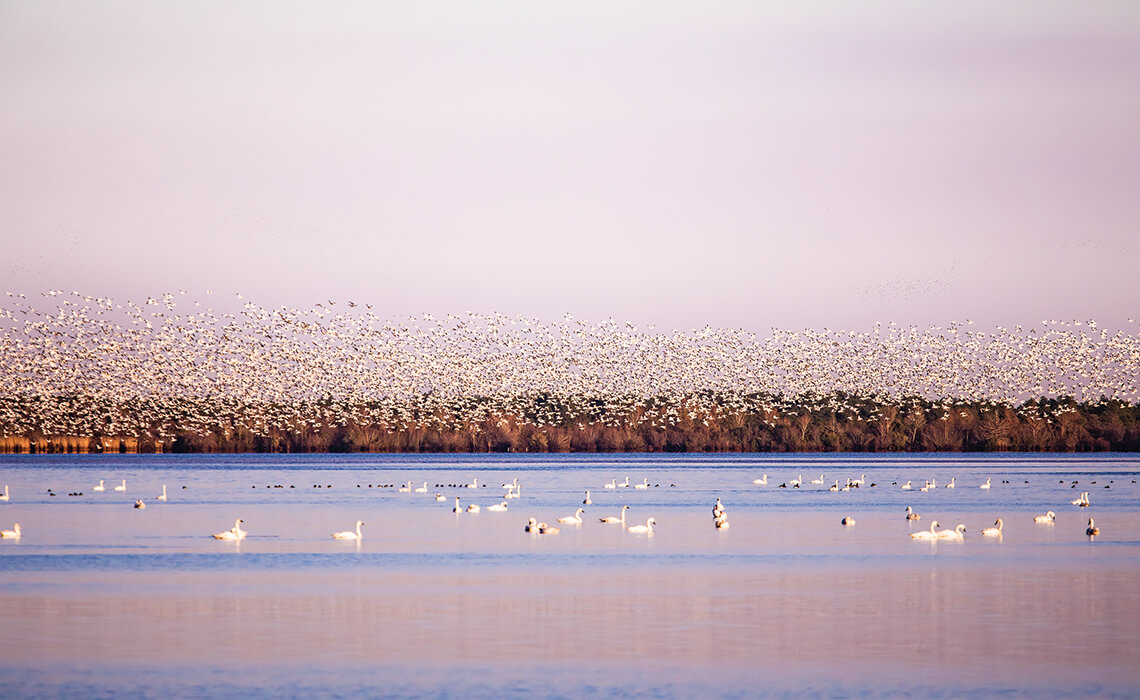 Flocks of swans, geese, and other migratory birds swirl and dip in massive waves of wings, casting vast shadows and glowing pink and orange in winter’s twilight. photograph by Chris Hannant

A few days later, Jeff, one of Cup A Joe’s owners, handed me an envelope with my name on it. Inside was a map of the Pungo Unit of the Pocosin Lakes National Wildlife Refuge in Pantego. Tom Earnhardt had drawn exactly where to go to see snow geese and tundra swans. “You will not be disappointed!” was written in Magic Marker over one of the map’s blue lakes.

I know Pantego, the small town next to Belhaven on the Pungo River. I’ve walked and ridden along Pantego’s roads, and the town seems to have more roads than streets. My good friend Nick lived in an old farmhouse there, right on the highway, just before the turnoff to the refuge. “Loving someone is the easiest thing in the world,” I once said to him. Nick died a year to the day that I received Tom Earnhardt’s map. His heart quit working, if not suddenly, then quietly, and decades before I would have hoped. Loving someone is the hardest thing in the world.

I call my father to ride down to Pantego with me. He used to drive those roads for work, and, now retired, he still knows the best places to eat, the best places to spot an alligator or bear. Plus, he’s fun. We pick up some fried soft-shell crabs at Washington Crab on the way, turn left after Nick’s house, and make our way down a road vibrant with greens and golds, even in the middle of winter.

To those familiar with eastern North Carolina in the winter, the preserve doesn’t look like anything special at first. We drive down a tidy dirt road bordered by ditches, moats to fallow fields of dirt clods and trees. Suddenly, a cloud of starlings and red-winged blackbirds erupts from a field, swells and settles, swells and settles, like a living breath, a welcome to a place made for birds, not people.

Above, lines of swans push through the sky like long-distance swimmers, their flanks flashing silver in the sun. The sound isn’t the honking cacophony of flocks, though thousands of birds are here. Instead, it’s a whistling, like a gust blowing through a loose screen. These swans and geese are the show birds, but they are not the only ones who come to the Pungo. Harriers hover inches above the grass, floating like trick kites. Song sparrows, so light they can perch on a blade of grass without bending it, sing their impossible refrain.

The dirt roads and viewing platforms are drivable, but the land is meant for wild things, not us.

The Pocosin Lakes National Wildlife Refuge started with about 12,000 acres of the Pungo Unit in the 1960s and now stretches to encompass more than 100,000 acres across Washington, Hyde, and Tyrrell counties. It is a sanctuary for migrating birds, with pocosin swamp pews, trees for buttresses, baptismal fonts made of soggy peat and glimmering ponds. The dirt roads and viewing platforms are drivable, but the land is meant for wild things, not us. It has year-round residents, like otters and bears, but in November, December, and January, winged vacationers pour in: More than 20 species of migrating ducks, tundra swans, and snow geese have made the refuge their winter retreat.

North Carolina isn’t home for these geese and swans; they settle in with their life mates to build shallow nests on the ground of the Arctic tundra. Still, they need North Carolina. More than 100,000 birds usually land in the refuge each winter. They travel thousands of miles a year, and, for a few weeks, they gather here, rest, eat, commune, and move on.

We follow Tom Earnhardt’s marker line on the map to the place where he wrote, “You will not be disappointed!” He was right. Here, the lake is filled, wingtip to wingtip, with giant white birds. In between, we can see other birds: ducks and geese, cormorants with their snakelike necks. We park the car and stand by the reeds, picking out astonishers and old friends with our binoculars. Daddy points at a tuft of marsh plants and says, “What do you think about that guy?” I don’t see anybody. “There, look. He’s not quite like the others.” Peeking out from behind the plants is a lone Ross’s goose, looking like a shy partygoer with his short bill and his worried eyes. No other Ross’s geese in sight. He must have missed his flight. 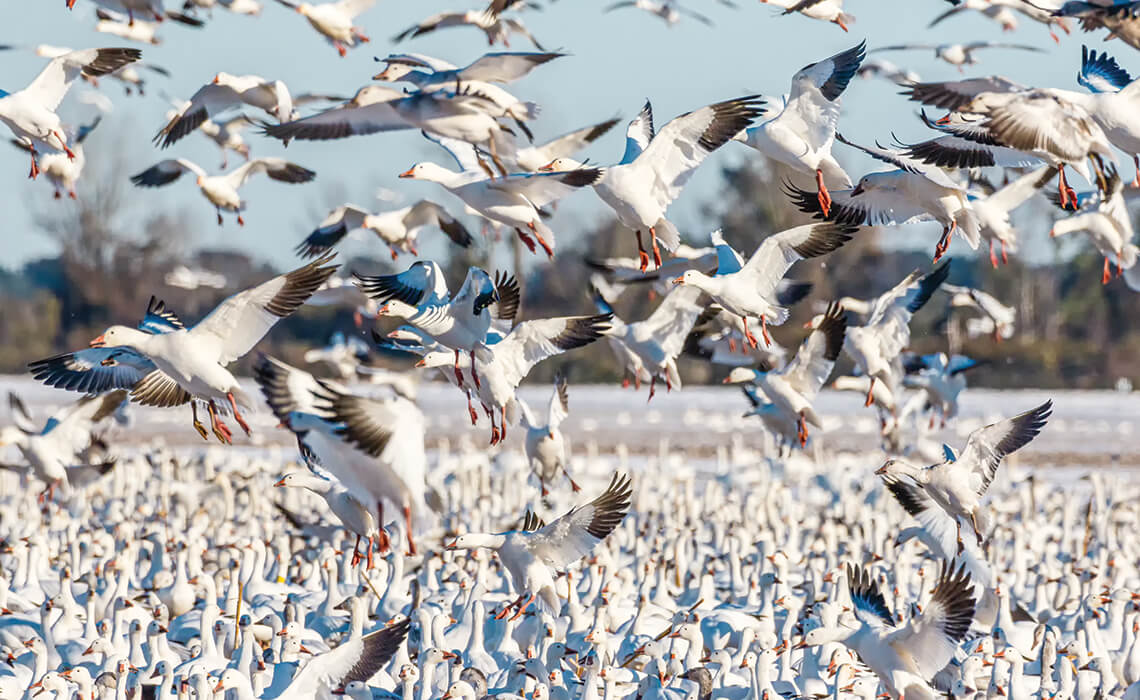 Of the many species of waterfowl that visit the Pocosin Lakes National Wildlife Refuge, the snow geese are some of the most flamboyant — and loudest. photograph by Allen Phelps Photography

Down the road a bit, we find a friendly birding couple from Indiana, who had come to North Carolina for a pelagic bird trip but stopped in the sanctuary in case they could nab a few life-listers. They mention a Ross’s goose. We happily point out the patch of plants where we spotted our lone friend a minute before. They load into their car and blow down the road to catch sight of him.

My father is a man who likes to show up early and walk around like he has nothing to do. He’s been taking me to wild places my whole life, showing me how to climb, to step where he steps, how to find wild things. He taught me to wait, still and quiet, long enough that the world forgets about us and goes back to its business — the beaver comes up for a breath, the snake peeks around a twig, the deer materialize like ghosts from the trees.

We pull up behind the birding couple’s car, now parked where we saw the Ross’s goose. They’re already climbing back in. “He left!” they holler as they wave goodbye to us. “If he was here, he’s gone now!”

Daddy puts the car in park. We get out and wait. Soon, the short-billed Ross’s goose peeks shyly at us from behind the cattails, right where we remembered him. He stares a long minute at us and waddles off to join the other stragglers. Daddy watches without surprise. I’m as old as he was when I was young, maybe older now. Loving someone is hard. It’s hard because, while you have the chance, it comes so easily.

The flashing lines of airborne geese are growing in number, their brilliant silver turning rose gold with the setting sun. The birds floating with the Ross’s goose in the paddock have been peeling off in strips of five, 12, 30 birds for an hour or more. It’s time for them to go to their evening spot, and time for us to go home.

Early evening now, and the harriers have given up their meadow sailing. The eagles are nowhere in sight. The song sparrows yield to quieter birds, birds with big eyes who prefer darkness.

Back in Raleigh, shifts are changing at Cup A Joe. The pontificators and smokers are gesturing from their perches on sidewalk benches. The after-work readers have tucked in with their teas. The exam studiers cradle foreheads in hands, sitting at tables with their books and papers spread before them.

Loving a place is loving an illusion, a living memory. But it is also real.

Loving a place is tricky. Places don’t move, but they change around so much that it’s hard to get ahold of them. These birds come to the refuge every year, have come since at least recorded time, but the land has changed. Farmers’ fields and homes squeeze the land one way; storm surges and floods push it another. The place is the same, but not the same. The birds are the same, but different birds over time. Cup A Joe looks the same, too, more or less, as it did when I started going there about 20 years ago, but today, the place is blocked in by tall buildings. The sunrise I used to watch from the front stoop when our older son was an infant can now only be seen if you’re standing in the middle of Hillsborough Street. Like the birds, the people have changed, too, and will keep changing, but they still seem the same in some ways. Regulars disappear and new ones arrive. Loving a place is loving an illusion, a living memory. But it is also real.

Within a few weeks, the birds will leave and hammer back or forward to their homes. Spring will come soon, time for nesting. Daddy and I will be back at our own nests. He will be in the nest that he and my mother built for us in Goldsboro. I’ll be in the one that my husband and I built for our family in Raleigh. We come, they go. They come, we go. And we love, in our places, behind us and before us. We love like the geese and swans fly, without instruction, at our own peril, because loving is what we do, what we must do. It’s the easiest thing in the world.