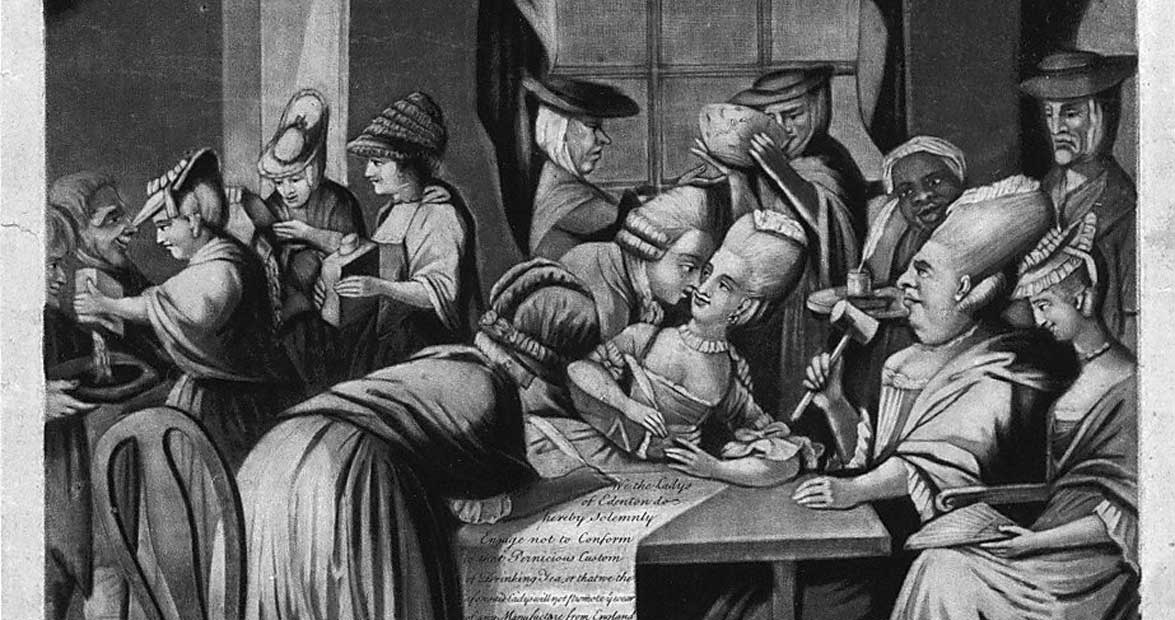 Featured Image: “The Society of Patriotic Ladies at Edenton in North Carolina,” a 1775 satirical depiction of a London caricaturist’s idea of ​​what an American women’s boycott meeting might have been like.

In her white frame house in Edenton, Penelope Barker carefully considered the plan. Like many of the other women in town, she was angry, and, inspired by the Boston Tea Party, she was ready to give proof of her patriotism. She just didn’t realize that she’d end up making history — and shocking the Western world — in the process.

On October 25, 1774, Barker and 50 other women resolved to protest the Tea Act of 1773. The women signed a strongly worded declaration, addressed to King George, refusing to drink tea or purchase textiles from England: “We the Ladyes of Edenton, do hereby solemnly engage not to conform to ye pernicious custom of drinking tea, or that we, the aforesaid Ladyes, will not promote ye wear of any manufacture from England, until such time that all acts which tend to enslave this our Native Country shall be repealed.”

During the 1770s, political resistance was common, but an organized women’s movement was definitely not. Barker and the other women believed that political action by women would be noteworthy in England and sent a copy of the declaration to the British press. The petition shocked the British as well as loyal colonists. London publications labeled the Edenton women uncontrollable, and caricatures of the women and their “tea party” filled the magazines.

Although their actions are less well-known today than the Boston Tea Party that inspired them, the Edenton Tea Party was one of the earliest organized efforts on the part of women to influence public policy.

Today, Edenton’s history is rich and omnipresent, with more than two dozen restored homes dating from the 1700s to the early 1900s. The second oldest town in the state, in the 1700s, Edenton was the capital of the fledgling North Carolina colony and a hotbed of Revolutionary-era activity.

To get a feel for its history, visitors can stroll the shaded grounds of St. Paul’s Episcopal Church on the corner of Broad and Church streets. Completed in 1774, most of its original woodwork is intact. On Broad Street, Penelope Barker’s house still stands, along with the 1758 Cupola House, one of the finest examples of Jacobean architecture in the Southeast. Nearby, on East King Street, is the 1767 Chowan County Courthouse, the most intact Colonial courthouse in America.

And near the courthouse, there’s a bronze teapot. It commemorates a revolutionary tea party — one where women made history, right here in Edenton.