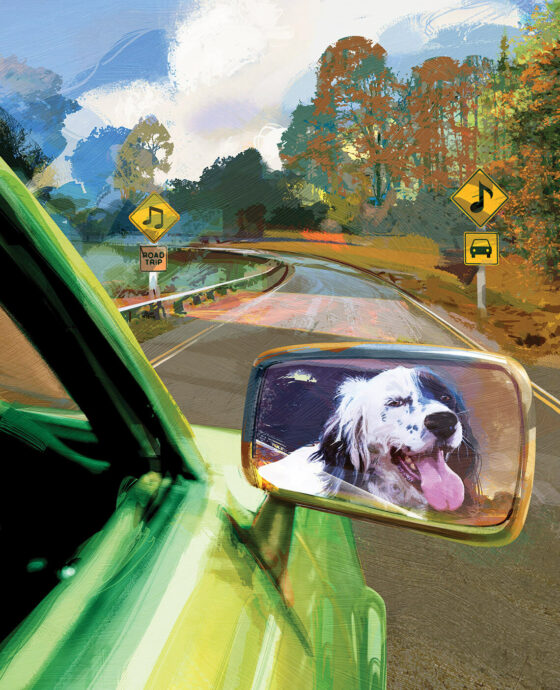 Fall foliage draped over Yadkin Valley like the patchwork quilt that my grandmama tossed across an old rocking chair in her spare bedroom. Yellows, reds, and greens burst from a backdrop of dull brown. Standing at Elk Mountain Overlook in Watauga County, I breathed in the cool October air. Spanky, my English setter with floppy black ears and symmetrical spots on his head and back, sat dutifully by my side, tongue resting on his bottom canines and mouth forming what looked like a big, peaceful smile. It was fall break, and I needed the 260 miles of distance between myself and my English and philosophy classes back at East Carolina University. The day before, I’d packed my little Toyota Corolla with warm clothes, a knotty wooden walking stick, a Gibson Hummingbird guitar, and a 90-minute cassette tape scrawled with the title My Home’s Across the Blue Ridge Mountains.

The plan was to drive solo along the Blue Ridge Parkway from Deep Gap down to Mingo Falls near Cherokee, stopping to hike and explore several spots along the way: Blowing Rock, Linville Falls, the Cradle of Forestry, and the parkway’s highest peak, Richland Balsam. Back at school, I was known as the mixtape king, so it only made sense that I’d create a soundtrack for the trip: songs drenched in fiddles and banjos; twangy voices backed by high-lonesome harmonies; and lyrics that complemented the rolling hills, gushing waterfalls, and little farmhouses tucked into the hollows, smoke puffing from their chimneys.

In the early ’80s, mixtapes were a relatively new phenomenon, and they were not easy to make. For one thing, the format of the period was the cassette — a ribbon of magnetic audio tape encased in a rectangular cartridge that you shoved into the deck of your car stereo system like a reverse Pez dispenser. Recordable tapes allow for about 45 minutes of music per side, so to create a mix that flowed seamlessly, without harsh transitions from tune to tune, I had to try to sequence the music so that the key of one song segued naturally to the next, and time them in a way that had the last track on each side ending just before the tape ran out. 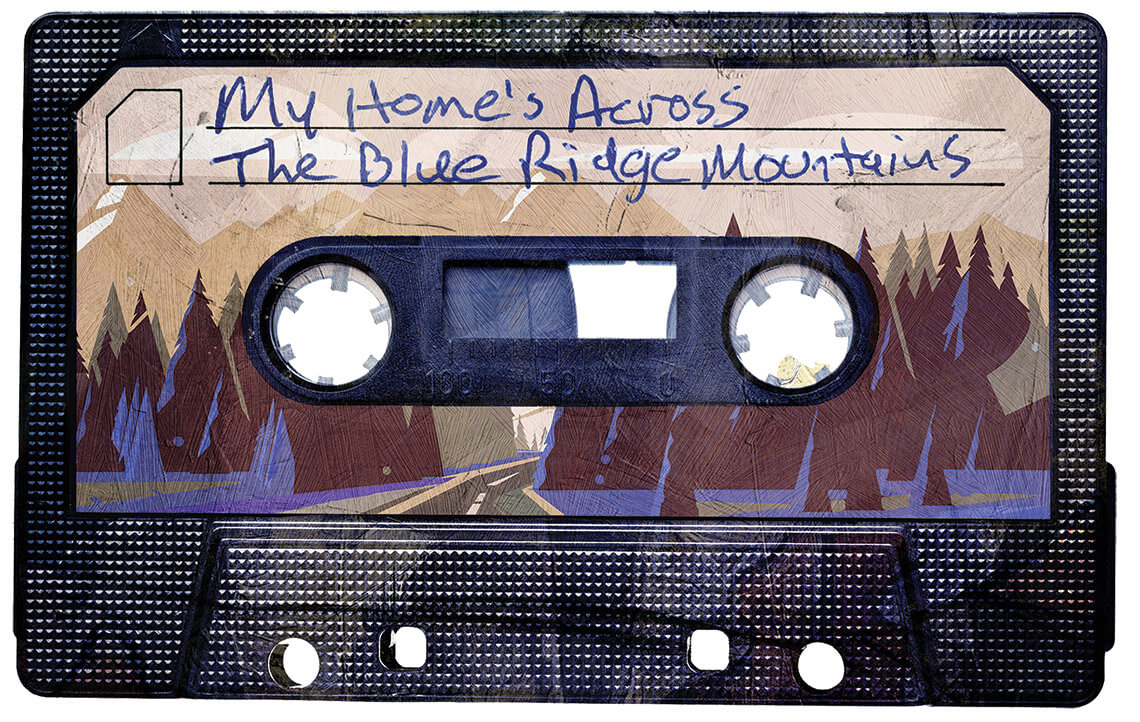 The next trick was finding the right songs. There was no Internet in the ’80s to provide an endless well of free music from every conceivable period in history, so for most of the songs, I had to scour my own prodigious collection of vinyl records. For songs that I didn’t have, I checked out folk-music compilations from the ECU library and borrowed a few albums from friends.

For continuity, I arranged the music in blocks of about eight songs, each set beginning with different versions of the Appalachian folk standards “My Home’s Across the Blue Ridge Mountains” and “Blue Ridge Mountain Blues” — one by Deep Gapborn folk singer Doc Watson, one by bluegrass king Bill Monroe, and so on. I closed my mixtape with a second recording of Watson performing “My Home’s Across the Blue Ridge Mountains,” this time dueting with one of the song’s composers, Clarence “Tom” Ashley, who’d grown up just across the Tennessee border in Shouns, about an hour northwest of Watson’s birthplace.

We began our journey with Watson’s amiable baritone bringing us out of Deep Gap and Dolly Parton’s angelic voice taking us through Blowing Rock. As we headed on toward Grandfather Mountain, the Stanley Brothers were picking and harmonizing their way through “How Mountain Girls Can Love.” About three-quarters of the way through the tape, Flatt & Scruggs’s full-throttle hurricane of banjo, guitar, and fiddle on their famous instrumental “Foggy Mountain Breakdown” landed us at Linville Falls.

Spanky loved two things in his short life: music and hiking. He’d been sitting in the passenger seat like a Buddha as the music played, the breeze from the window ruffling the red bandanna around his neck, his eyes closed and mouth fixed in that permanent smile. But when I slowed down at Linville, he began to get agitated. He was ready to take to the woods. We hiked the Linville Gorge Trail, which leads down to the cascading water. I used a towel to dry him off before we hopped back in the car and continued on toward Little Switzerland. It was there, near Wildacres Retreat on Pompey’s Knob, that my mixtape came to an end.

Spanky sat in the passenger seat like a Buddha as the music played.

The thing about a 90-minute mixtape, though, is that you can turn the cassette over multiple times throughout a trip and keep on listening. Which is exactly what I did, singing along again and again to the wonderful songs I’d compiled. We passed Mount Mitchell and Asheville and heard the great Ralph Stanley moan “Little Maggie” around Maggie Valley between Balsam and Mingo Falls, the 120-foot-high waterfall just inside the Qualla Boundary. By this point, it was dusk the following evening, and though Spanky and I were nearing the end of our trip, the music would continue to ring in my head.

Many years later, Spanky long gone, a friend and I would retrace my route from Deep Gap to Mingo Falls, but we decided to continue beyond the Blue Ridge Parkway, taking U.S. Highway 74 toward Murphy. That night, we ended up at a little store called Clay’s Corner, where the tiny community of Brasstown used to hold a “Possum Drop” out front every New Year’s Eve. But on this November night, only a handful of old men gathered at the back of the store, guitars and banjos in hand, jamming on old-time country and bluegrass songs. And if I recall correctly, those old pickers eventually made their way to their own ragged version of “My Home’s Across the Blue Ridge Mountains.”