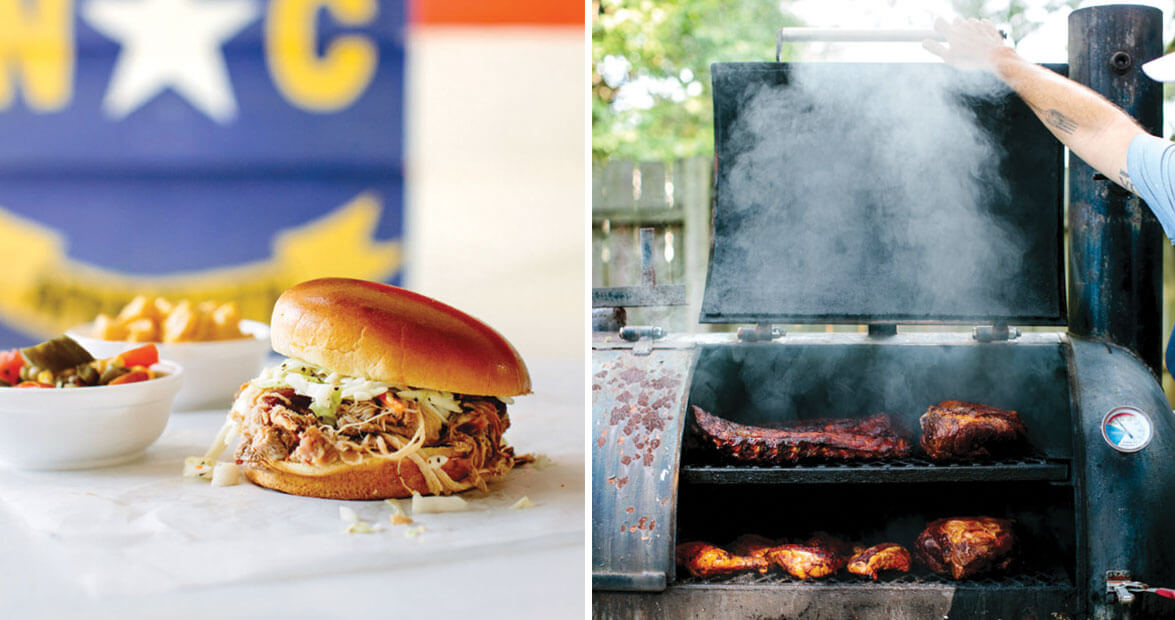 Barbecue purists swear that a surefire way to size up the authenticity of a North Carolina barbecue joint is to smell smoke in the air before you see the front door — and to pass at least one woodpile before you cross the threshold. By those measures, and plenty more, Southern Smoke BBQ in Garland is the real deal.

An old song laments that smoke gets in your eyes. Matthew and Jessica Register’s story of how they came to own a barbecue joint suggests that it gets in your blood, too. Self-taught, but part of a long line of Southern cooks, Matthew began smoking pork (and practically anything else he could get his hands on) the traditional way, low and slow over smoke from an oak fire.

Inside the couple’s Southern Smoke kitchen are two Old Hickory smokers named Maybelle and Etta (as in legendary singers Big Maybelle and Etta James). Outside sits Matthew’s mobile smoker, Jezebel (a biblical name he picked up from an old blues song), which was built out of an old thick-walled gas tank from the ’60s. Jessica’s uncle constructed the whole thing, including the trailer that Jezebel sits on. Matthew’s dad added a rack to hold firewood. Then, he added one last upgrade: a basket from a four-wheeler to hold a chopping shelf.

Matthew confides that Jezebel is “moody and temperamental” — as so many beautiful and complex creatures are — but concedes that she works hard, and often. When she’s not in use just outside the front door of the restaurant, Matthew and his crew are probably towing her to an event in eastern North Carolina, sometimes farther. Naturally, a smoker named Jezebel is in high demand on the food festival circuit.

To cook with smoke requires an understanding of fire, which Matthew accrued over the 10 years that led up to opening Southern Smoke. He pulled a lot of all-nighters, sitting solo in his backyard next to a firepit and woodpile, a notebook by his side to record his observations. “If you sit up all night with enough fires,” he says, “you learn to handle all kinds of them and react to all kinds of circumstances.” 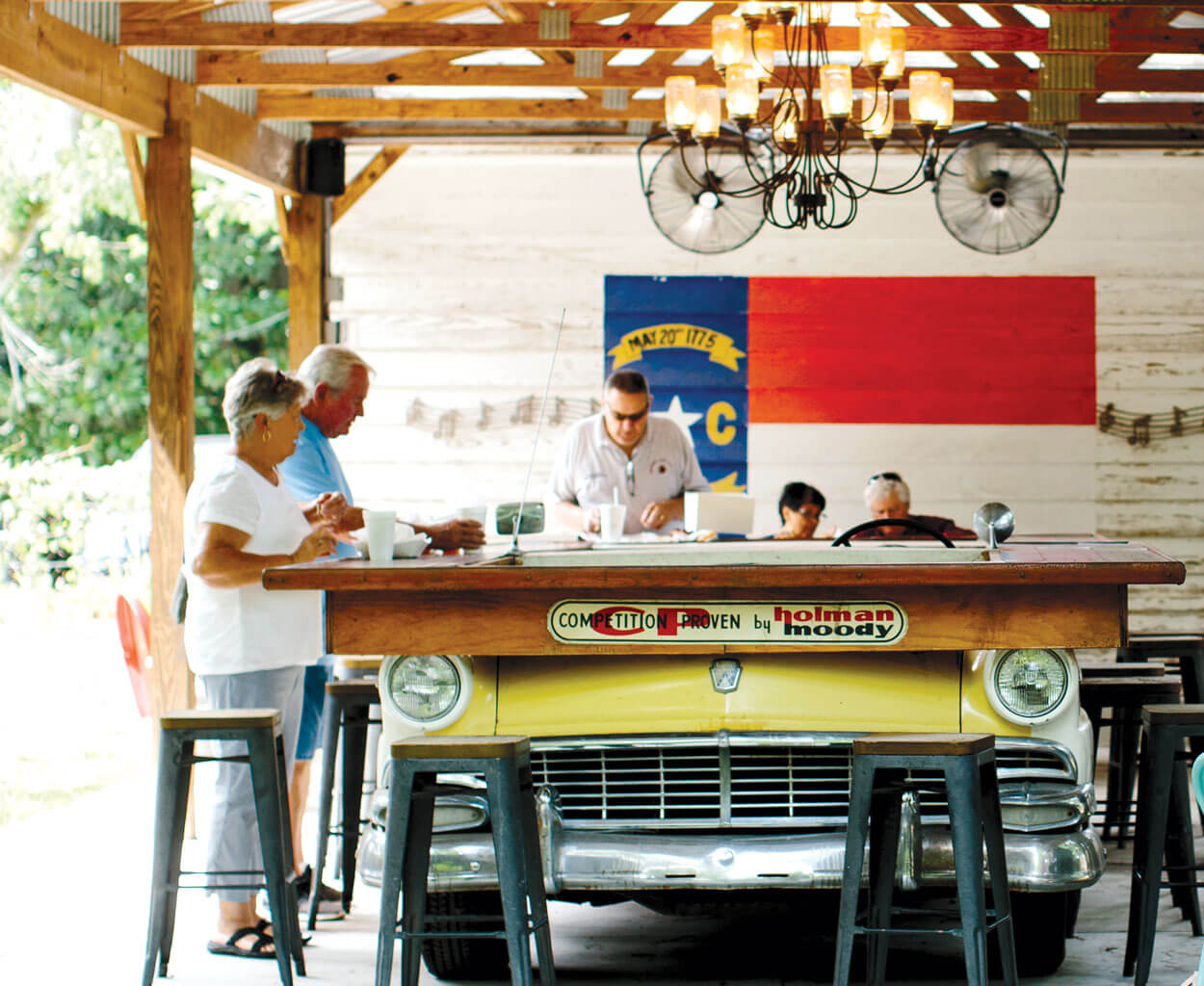 Diners at Southern Smoke are happy to share the few tables outdoors. photograph by Anagram Photo

When Matthew builds a fire inside Jezebel, he pulls kindling and logs from one of the nearby woodpiles — a lot of white oak with a little bit of red oak, most of which comes from within 15 miles of the restaurant. “The first step in knowing fire is knowing wood, knowing how each piece will burn,” he says. “Is it new or old? Has it rained lately? You have to sift through the woodpile and feel each piece.” He opens Jezebel’s doors and dampers wide to get the air flowing, then stacks kindling inside, igniting it with a blowtorch. “Use old wood to get it to catch. That ought to get it good and ripping,” he says. “But you have to listen to it. You can hear when a fire is struggling. Pops and hisses are all sounds of struggle.”

“The color of the smoke changes, and it needs to be a different color for ribs versus barbecue.”

He stays by Jezebel’s side for at least the first hour, adjusting the dampers and adding the type and size of wood the fire needs, anticipating “how logs will shift and fall as they burn and collapse.” He never stops monitoring and fiddling with the flames. “I’m piddling with it, can’t stay out of it,” he says. “I have to chase it until it acts like I want it to.”

Before loading in the meat, he tests the temperature by holding his hand over Jezebel’s chimney. “Trust your senses, not a temperature gauge.” He also reads the smoke. “Its smell is deeper. You can see a heat ripple in it. The color of the smoke changes, and it needs to be a different color for ribs versus barbecue.”

Matthew loads in as much meat as will fit, but he arranges each piece according to how smoke pulls and moves through Jezebel. “I want it to roll naturally and evenly over the meat, not bounce across it,” he says, his hand smoothly skimming the air. “The aerodynamics are affected by the size, shape, and position of every piece of meat inside.”

When the doors are shut, he continues to keep watch and listen. It’s part ritual, part art. “A pit fire is different from a campfire. It smells different,” he says. “There are cumulative aromas of pig grease, sugar, and smoke. There’s a sweetness in it. One whiff immediately takes me back to all those nights I sat out by myself.” Then again, he adds with a chuckle, “you never get used to smoke in your eyes.” 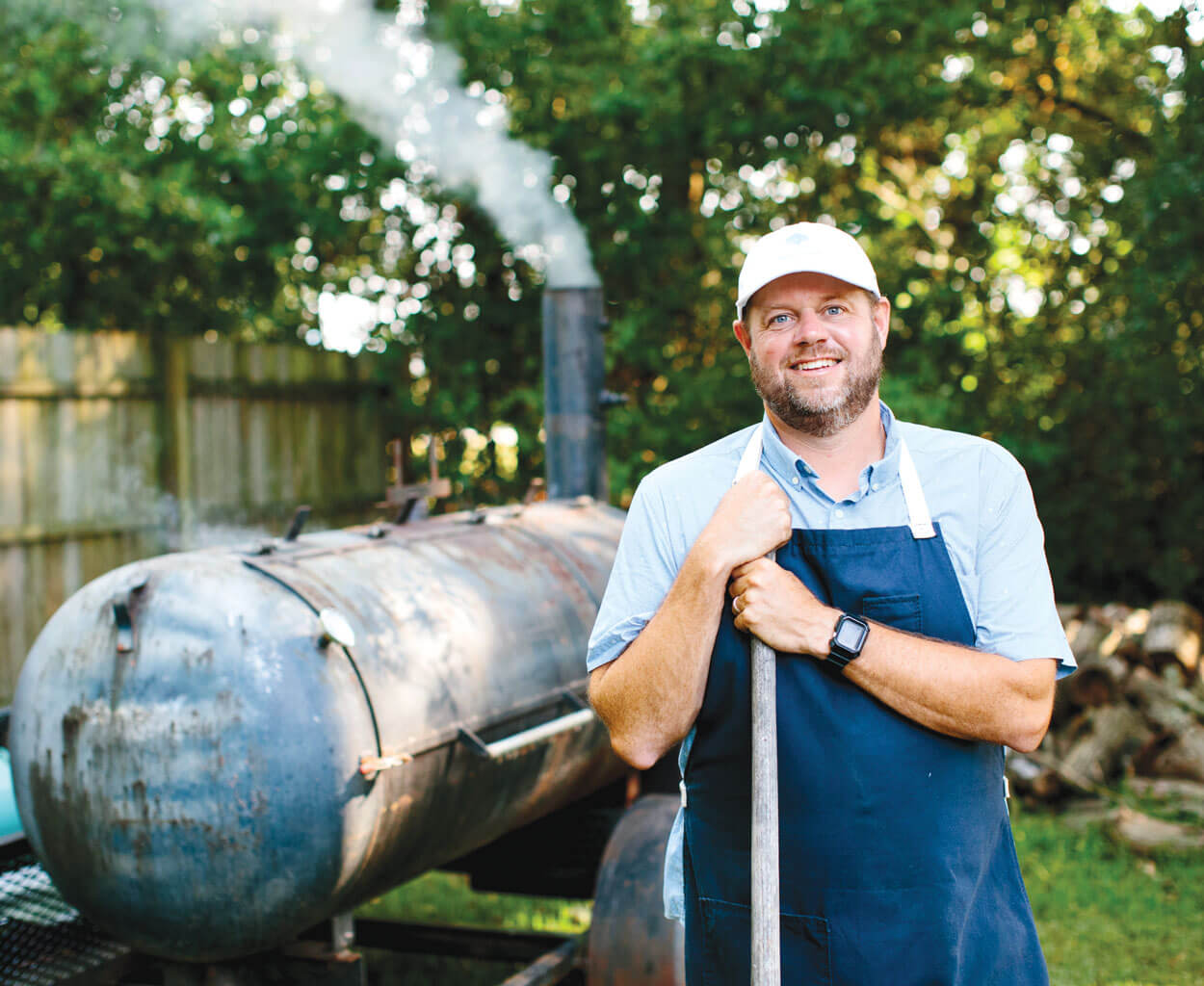 Owner Matthew Register (right) has created a family atmosphere. “There’s a bond that’s formed when cooking barbecue,” he says. “We all know what really goes into it: being tired, sitting up until 3 a.m., telling stories. It’s such a family-oriented thing.” photograph by Anagram Photo

A single blinking caution light is among the few navigational landmarks in Garland. But during a lunch stampede at Southern Smoke, you can find your way to the restaurant by looking for all the cars and pickups clustered outside the surprisingly tiny building. The restaurant is open on Thursdays and Fridays only, from 11:30 a.m. (sharp!) to 3 p.m. Depending on the season, they may open again on Friday nights at 5.

Inside, it’s standing room only (no, really, all orders are carryout), but the service is swift and personal. Matthew’s mama takes orders and works the register. His dad makes the barbecue sandwiches. He’s also the late-night fire keeper: “I get it started,” Matthew says. “Then I go home. Daddy’s a night owl, so he checks the fire through the night.” 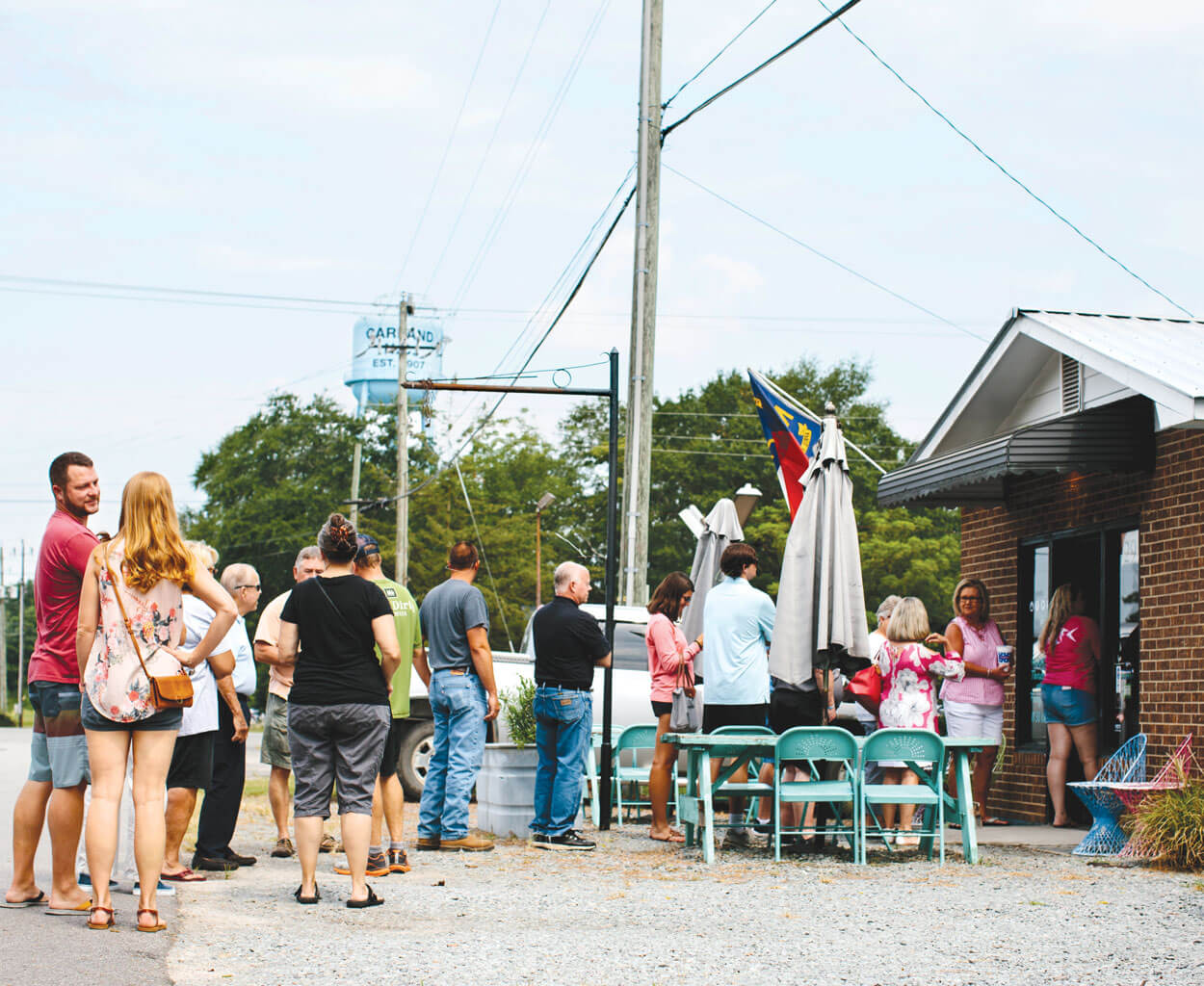 An itty-bitty joint that packs tons of flavor, Southern Smoke is a carryout operation with a few outdoor tables. The line goes fast — but so do the smoky meats and traditional sides. When the food runs out — and it often does — the Registers might close up shop for the day. photograph by Anagram Photo

Southern Smoke is a family endeavor from top to bottom. Jessica, co-owner of the business, designed the logo that appears on the front door and on their food truck; much of the barbecue lineage in the family came down through her side. The restaurant’s barbecue sauces are inspired by the couple’s children: Sweet Grace is named for their daughter, and Two Brothers is named for their sons. Matthew also never fails to credit the influence of his grandmother on his cooking ambitions. He prizes her collection of recipes even more than his own library of vintage Southern cookbooks.

During the day, Matthew holds down the fort in the kitchen with longtime employee Rodolfo, keeping an eye on the two rooms through the wide doorway between them. Mama handwrites the day’s offerings on a huge blackboard that covers one wall, a mix of traditional sides and dishes unlikely to be found elsewhere, like pork belly and sweet potato hash, collard chowder, smoked tomato gazpacho, and smoked mushroom tamales.

The eclectic menu reflects both Matthew’s appreciation for traditional Southern barbecue and his wide-ranging culinary style: In fact, the only thing he likes better than tradition is thinking up new ways to use familiar ingredients and flavors. Barbecue, chicken, and ribs are constants on the menu, but beyond that, he changes the dishes based on his whims and the season.

He also credits his hometown of Garland and Sampson County for their role in supporting Southern Smoke. “My story is improbable — especially in a town of 700 people. Nothing about this should have worked, but it did,” he says. Place is important to him. So is family. “This is where I’m from, and this is where I’m staying. Everything we do is an effort to teach our children their culinary heritage.” And, he adds proudly, “how to build a fire.”