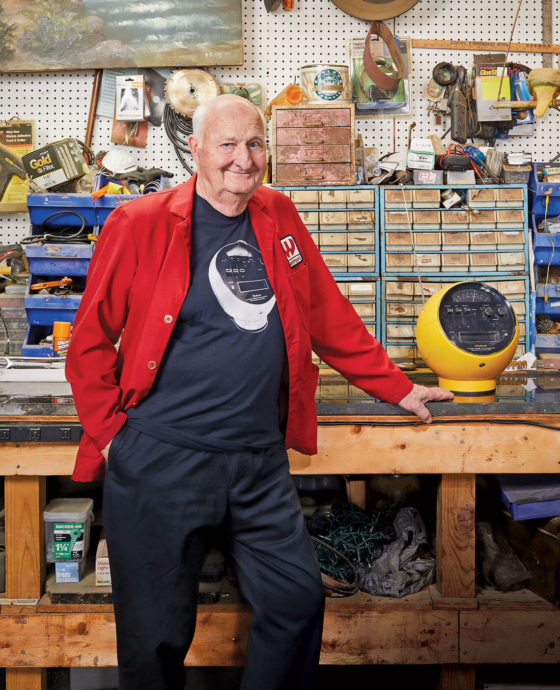 The freshly minted millionaire would hop a southbound plane from New York City every Friday, land at the Raleigh-Durham Airport, and then, if he was lucky, hurry over to a square dance. He’d hoot and jig and forget, for a moment, the space-age stereos that had made him rich, the production lines he supervised in Asia, and the media hype he orchestrated to stoke the desires of swinging ’70s hipsters everywhere.

Once back in North Carolina, square dances and all, J. Pratt Winston was “in heaven,” he says today, decades later, and then pauses. “Ah, but that’s hick stuff,” he says with a snort. “Nobody wants to read about hick stuff.” Ever eager to please, the 86-year-old pivots to tales of how his UFO-inspired stereo designs eventually made his company, Weltron, iconic. He talks of negotiating in Manhattan boardrooms, and of entertaining at the Playboy Club. But the arcs of Winston’s stories tend to follow the path of his life, returning him to Grassy Creek, a sleepy corner of the tiny Granville County town of Bullock.

Born in 1933 and raised amid economic depression and war, the young Winston seemed an unlikely candidate to set the world on fire. His first attempt at earning a living — growing tobacco on a piece of his family’s Granville County farmland — ended when the crop went up in flames. After picking up an engineering degree at a community college in Danville, Virginia, Winston landed a job with Charlie Womack, an ambitious Danville businessman who owned newspapers and an electrical supply company. “Charlie had a mind for a dollar,” Winston remembers. “I had a mind for daydreams.”

Winston’s aw-shucks style and curiosity made him a winning salesman and a reliable scout for coming trends. Fatefully, one of the assignments Womack handed to Winston was a trip to Japan to investigate the making of transistor radios. Early on, the company cashed in on the rock ’n’ roll boom, buying guitars wholesale and selling them under the name Weltron. But Winston was looking to be an owner, not just an employee, so, in 1968, he persuaded Womack to help him found the Weltron company, based in Durham. One summer day, Winston took in a matinee, and what he saw on the screen would rocket Weltron into pop-culture orbit. 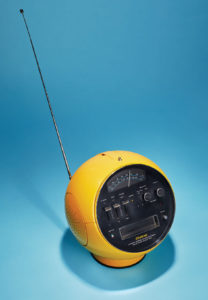 Various sources credit 2001: A Space Odyssey with inspiring Winston’s sphere-shaped Weltron Model 2001 all-in-one eight-track tape/AM-FM radio unit — the “space ball” design later seen in the retro spy comedy Austin Powers: International Man of Mystery and celebrated on the Facebook fan page “Weltron fever.” Others chalk up its design inspiration to America’s space-race infatuation with astronauts, including their spherical helmets. But today, Winston also credits an earlier movie, 1953’s The War of the Worlds: “The aliens marched around in spacey boxes; they had everything they needed in there.” Why not, Winston thought, load a radio, tape player, and speakers into something flashy and portable?

A friend told Winston about an engineer in Japan who had similarly “crazy” ideas. Based on his past trip there, Winston admired the burgeoning Japanese tech scene, and he soon invited Ryuzo Fujita — whom he’d never met — to the States. Though neither spoke the other’s language well, the odd couple tinkered away for several marathon days in a humble warehouse on Dillard Street in Durham. As soon as they had a cast of the Model 2001’s signature spherical casing, Winston went hunting for interested buyers. “A lot of people laughed at me,” he says. “They said the thing I was carrying around looked like a portable commode. I didn’t care.”

A Midwestern mail-order company’s surprise contract for more than 20,000 units launched the 2001 into mass production — destined to hit the surging stereo market in 1970. Scrambling to meet demand and explore new ideas, Winston brought over more Japanese engineers. By day, they worked in the Durham warehouse. At night, some returned to his 19th-century brick farmhouse overlooking Kerr Lake. There, Winston and his wife, Gwendolyn, outfitted part of their busy but spacious home with tatami mats and a hibachi grill.

“A lot of people laughed at me. I didn’t care.”

By 1974, corporate behemoths set their sights on acquiring Weltron. The first offered to pay in stock. Winston balked, telling them, “Man, there’s not enough cash here to buy a loaf of bread!” The second — LCA Corp., an affiliate of Walter Kidde & Co. — offered cash. Suddenly, Winston was a wealthy man, worth about $5.5 million, adjusted for inflation. Just as suddenly, he was no longer a scrappy entrepreneur, but a cog in a giant corporate machine. Under the terms of the deal, Winston traded the rolling countryside of North Carolina for the teeming concrete canyons of New York City.

The smart-aleck receptionist at LCA wasted no time pointing out how badly Winston stood out in his gleaming new environs. “Whataya mean you just flew in from RAW-leeee?” she teased, mocking his molasses-thick drawl. The accent also befuddled fellow executives and far-flung phone customers. So Winston ponied up for a speech therapist. “She told me I had a lazy tongue,” he says, “and that she couldn’t help me unless I was willing to train my mind to fix it.” Winston quit the sessions, accent intact. After all, his drawl helped him as a salesman. “It made me different,” he says. “It gave me something to talk about other than just business.”

Winston needed all the wiles he could muster as Weltron introduced a new unit, Model 2005, which included a built-in turntable. For the unveiling, he rented out the fabled Playboy Club, inviting The Wall Street Journal and other top-tier press. “Oh, I ate it up — everybody did,” Winston says, and grins. The press notices, he adds, were glowing. 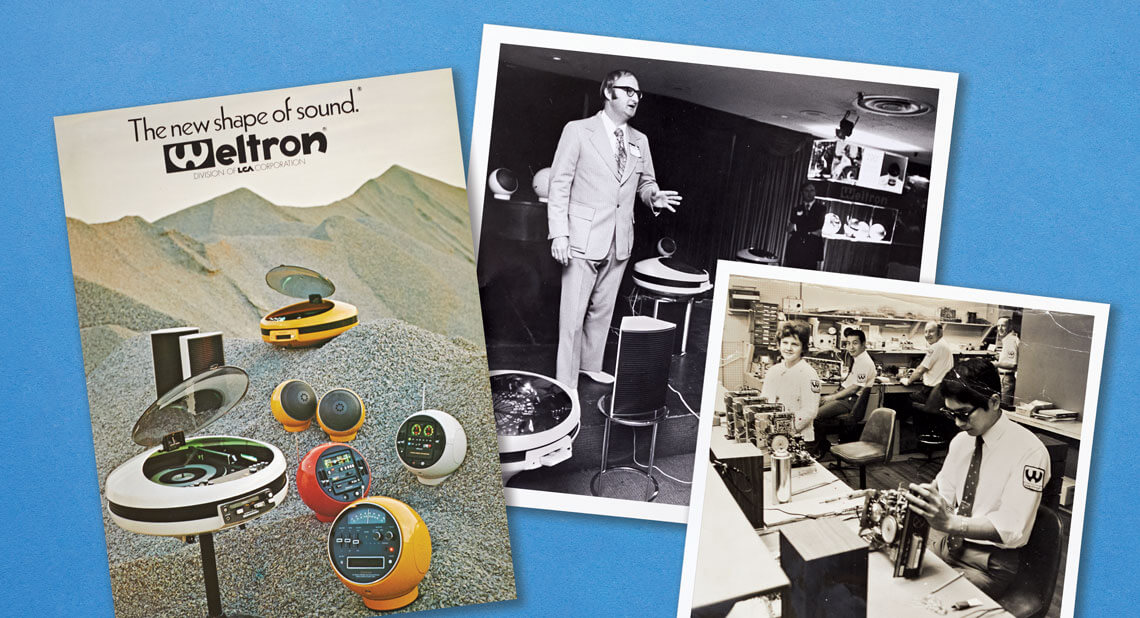 Winston used his Southern drawl to pitch Weltron’s products at the Playboy Club in New York. His early workshop in Durham buzzed with creativity. photograph by Alex Boerner

But most days were just a grind, and as Weltron’s production ramped up, so did Winston’s travel schedule: Tokyo, Singapore, Zurich, Paris. He tried relocating Gwendolyn and their children to the Big Apple. Two weeks in, his wife announced: “Pratt, we just don’t fit in. Me and the kids’ll be leaving on Friday.” So the lonely executive regularly darted home to North Carolina, only to be in the air again and headed back to New York two days later.

In 1978, as Winston’s higher-ups at Walter Kidde were preparing to relocate him overseas, it dawned on him: “I never took my children to a ball game. I’m gonna lose my family. And for what? For a dollar?” He quit the conglomerate and hightailed it back to Granville County. There, he was able to enjoy the important things in his life: He cheered at his daughter’s ballet recital and frolicked in the family pool. Then he got restless. He joined the boards of Central Carolina Bank and Trust and the Research Triangle Regional Partnership. Reckoning with the entrepreneur bucking inside, he cofounded Winston Electronics, specializing in circuitry and cables, in a former bus depot in downtown Oxford.

The walloping thump of a hip-hop anthem pumps from a car at the intersection outside of Winston’s office, causing him to pause and cock his head toward the window. “Those speakers have some serious power,” he giddily notes. “If you could get ’em on the right frequency, I bet they could shake the walls of this building down.”

That’d be a sight to behold. The Winston International Ltd. building in Oxford counts a staff of 30 or so sprinkled through hives of research, administration, manufacturing, packaging, and shipping — all wrapped in a castle facade that dates back to the early- to mid-1900s. Though son Francis now runs the show, Winston still dutifully saunters into his office, which is decked out with two stacks of Weltron “space balls” and other memorabilia. 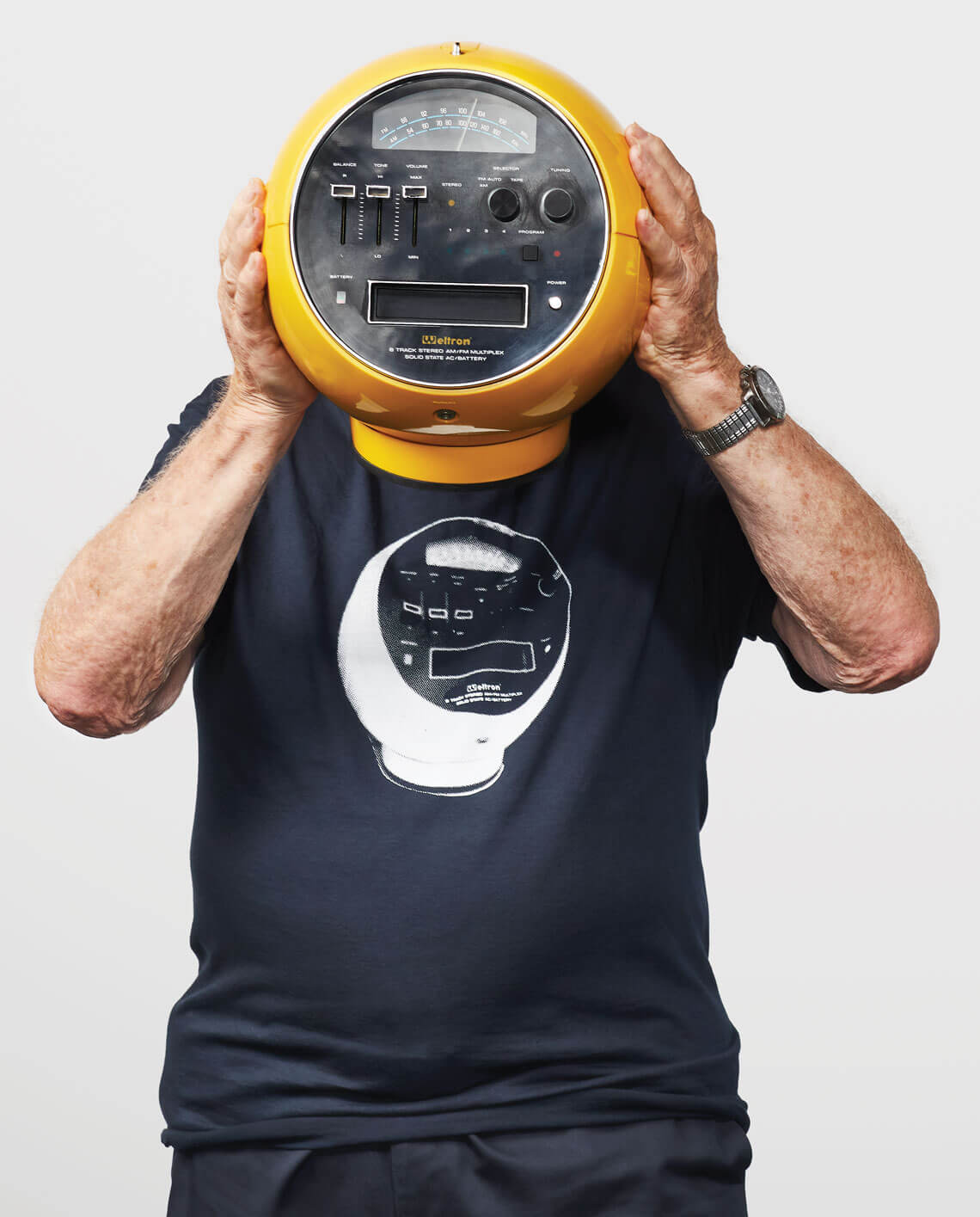 Who’s the alien with his face obscured by the Model 2001’s space helmet-like design? It’s Winston, of course — the wizard behind the curtain of the iconic 1970s electronics brand Weltron. photograph by Alex Boerner

Naturally, the consummate salesman has made many friends. “When you see him at the post office and he asks how you are, he stops and really listens,” says Harry Mills, executive director of Granville County Economic Development, whose office is just up the road from Winston’s. “He embraces small-town life. And at the same time, he knows that just because you live in a small town, that doesn’t mean you don’t have the savvy to do something big.”

There have been big life changes here, too. Winston’s beloved Gwendolyn died suddenly in 2009. But Winston was there when it happened, not on a plane or in a boardroom. He has since remarried to JoAn, a retired schoolteacher who seems perfectly at ease with her husband’s boyish energy.

While Winston was soaking up the quieter life back home in Grassy Creek, his space-age stereos, symbols of the swinging ’70s, developed a fervent cult following. Brian McFadden, a longtime disc jockey on Raleigh rock radio, lusted after the 2001 while in junior high school in Asheboro. Now, McFadden scoops up decrepit models and meticulously restores and resells them. “I love ’60s design and the space element, and the design of this is so eye-catching,” McFadden says. “The fact that the legend behind it is local just adds to the allure.”

Occasionally, an aficionado tracks down this legend. “I had a guy come in a while back and set his Weltron on my desk and go, ‘Can you fix it?’” Winston says. “I said, ‘Man, that thing is 50 years old! No!!’”

These days, he dreams of a venture involving “vehicles of the future.” He’s not ready to publicly disclose the project, but when talking about it, his eyes turn into gas flames — perhaps like they did when he watched The War of the Worlds so many years ago. “Man, a world we can’t hardly imagine is coming,” he says. “I can see it.” Then he pauses wistfully and adds, “If I was just a little bit younger.”