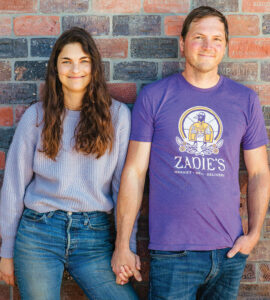 Emily and Josh Copus turned a decommissioned jail into an amazing stay. photograph by Baxter Miller

Between craggy cliffs and riverside train tracks, the 1905 Marshall Jail has borne witness to the ebbs and flows of a beloved Appalachian town. The legends that the building holds and the stories etched into its patinated walls are part of what attracted Josh and Emily Copus to the property. With the help of three partners, they bought the nearly condemned building in 2016 and have since restored it as a boutique hotel, market, bar, and restaurant.

Inside, they’ve preserved memories like those recalled by A.J. Bridges, who remembers filling pint bottles with corn liquor for his incarcerated buddies to pull up using bedsheet “ropes” fed through the window bars. And by Geraldine Brown, who worked nights as a dispatcher for the Sheriff’s Department 30 years ago. She often listened to Elvis on the radio and made biscuits every morning. Deputies and inmates ate the same food. Folks from town would come into the jail, too, just to eat. “I’d go in to eat all the time,” Bridges says. “Everybody would. Old country food — beans and taters.”

In some ways, the jailhouse encouraged a sense of community. Small trespasses were often overlooked on a handshake promise not to become a repeat offender. Unsupervised fishing breaks and lenient work releases were commonplace for inmates. Small acts of kindness were, too.

“You were here to help them,” Brown says, “to show them better, not beat them over the head. It’s the little things that matter. If an inmate was hungry, I’d make ’em a peanut butter sandwich. Because, why not? Don’t matter who you are. You got to help people if any way possible.”

The stories within Marshall’s collective memory and the secrets hidden within the jailhouse walls live on today thanks to the Copuses. Decommissioned in 2012, the jail needed extensive repair. Local folks had varying ideas about what to do with the building. “It was very institutional,” Josh says. “Everyone who came in here said, ‘This is crazy; you’re crazy.’ ”

But most agreed that the jail was worth preserving. Josh, a potter who digs his own clay from the surrounding hillside, and Emily, who owns Carolina Flowers Farm and Florist, had a vision. Instead of painting over painful truths and reburying uncovered secrets, they’ve peeled back layers to display a portrait of people, place, and time that honors the past and forges a fresh story for a new century.

When the work began, Josh approached the renovation as an extension of his own artistic practice — modeling, shifting, shaping, and layering. With every painstaking inch of progress, the building itself became his medium. Along with a local architect and contractors, he preserved graffiti left behind by inmates, transformed old radiators into fences, oxidized metal sheets to a perfect patina, repurposed window bars as handrails, and invited the public to participate in a brickmaking project. Those bricks now form the property’s patio and some of its exterior walls. When Josh discovered a homemade bedsheet rope stuffed into a crack in a cell — perhaps the very one that A.J. Bridges used to smuggle liquor — he displayed it in a shadowbox.

The Copuses opened the Old Marshall Jail Hotel’s four suites, two compact bunk rooms, and Zadie’s Market to the property’s first voluntary guests last year. The industrial, light-filled rooms are adorned with Josh’s pottery and flowers from Emily’s farm. Zadie’s Market — a regionally focused restaurant, bar, and grocery concept whose menu is developed in collaboration with acclaimed Asheville chef John Fleer — offers elevated bar snacks, craft beverages, and Appalachian-inspired dishes. “We’re in this incredible position to be an instrument for this little nook of Appalachia where we live and work,” Emily says. “We want this place to feel rich for people.”

In the evenings, guests dine in the space where Geraldine Brown’s office once was. In the morning, as they emerge from their rooms — maybe the one in the old sheriff’s office — they’ll imprint their own memories into the life of the Old Marshall Jail.