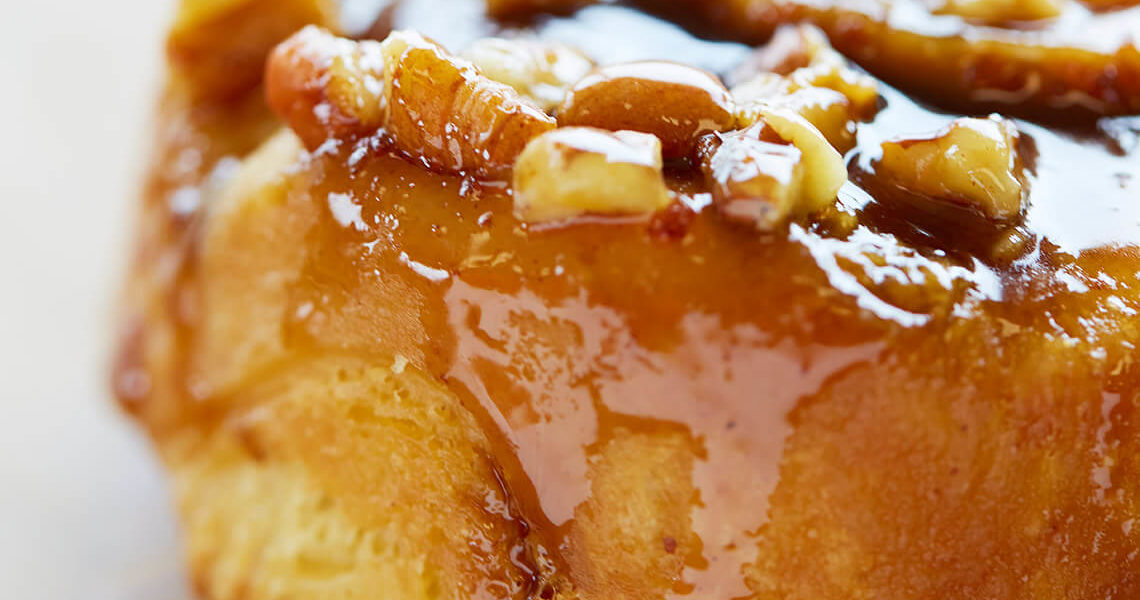 I have a confession to make: I am no stranger to Mickey’s Pastry Shop in my hometown of Goldsboro. All 40 of my birthday cakes, no matter where I was living, came from Mickey’s. Our five-tiered wedding cake? Mickey’s. On the early morning of my son’s birth, my parents waited for Mickey’s granddaughter Melanie Daniels to open the bakery so they could get doughnuts and cream puffs to take to the nurses at the hospital in Raleigh.

When I was too small to see the top rack on the display case, my father would take my brother and me to Mickey’s in the pink building downtown. “You pick out whatever you want. It’s yours!” Mickey McClenny would say, then hand us a chocolate chip cookie or a cream horn — a hollow spiral of puffed French pastry filled with a cloud of white icing and dusted with powdered sugar. We would marvel for a minute, then eat them slowly to make them last while Mickey and our father talked about the recent ACC games that Mickey had refereed or the gentle goings-on in our small town. 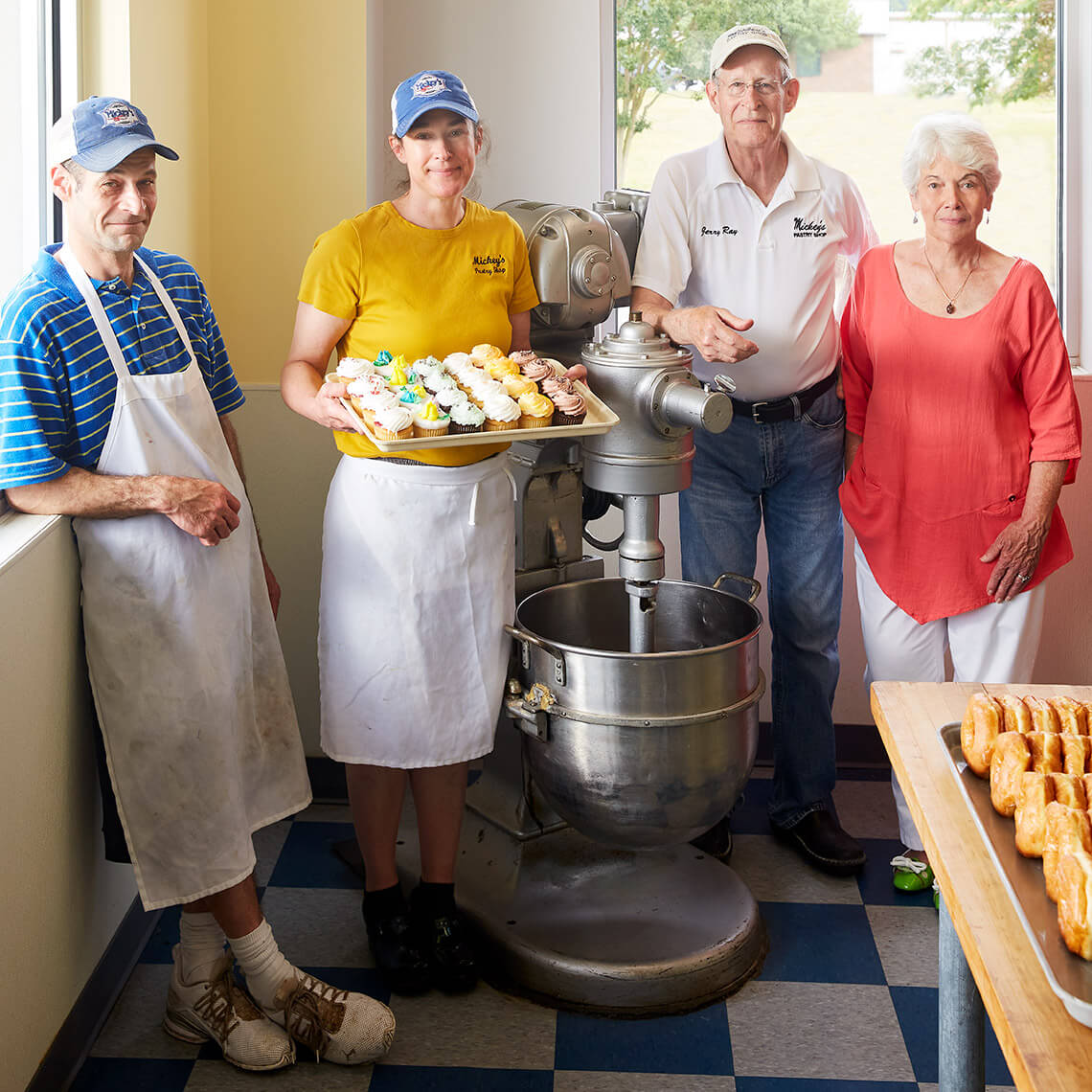 Thanks to loyal customers and hard work, the Danielses (from left), Jerald, Melanie, Jerry, and Carole, have managed to continue Mickey’s legacy in Goldsboro. photograph by Stacey Van Berkel

This year, Mickey’s celebrates 75 years as a pastry shop, and for the first time in my life, I was allowed behind the counter. I saw the instruments and people that have built these bits of comfort and joy for three-quarters of a century up close. Long wooden tables for rolling and spreading, giant mixers, an oven with an inside that rolls like a Ferris wheel. I saw Melanie, who owns and bakes at Mickey’s now. I saw her parents, Jerry and Carole. Jerry is Mickey’s son-in-law and ran Mickey’s before Melanie took over. I saw Melanie’s brother, Jerald, who co-owns the shop and directs the distribution of Mickey’s pastries to more than 85 stores in eastern North Carolina. Then I saw a white five-gallon bucket in a refrigerator in the back of the shop.

When Melanie peels open the bucket’s lid, it smells like the fair, or like Mickey’s cream puffs — doughnuts filled with a silky cream frosting. The bucket holds starter, a glob of dough the color of honeyed cream.

Melanie’s starter is older than she is. It was a gift from her father, who received it from his father-in-law, Mickey McClenny. Mickey received it in 1946, when he bought the bakery from Nathan Crocker, who opened his bakery in downtown Goldsboro in 1920. Mickey worked for Crocker’s bakery as a boy.

“We feed it every day,” Melanie says. “When we moved from downtown, that was the last thing to leave the bakery.” 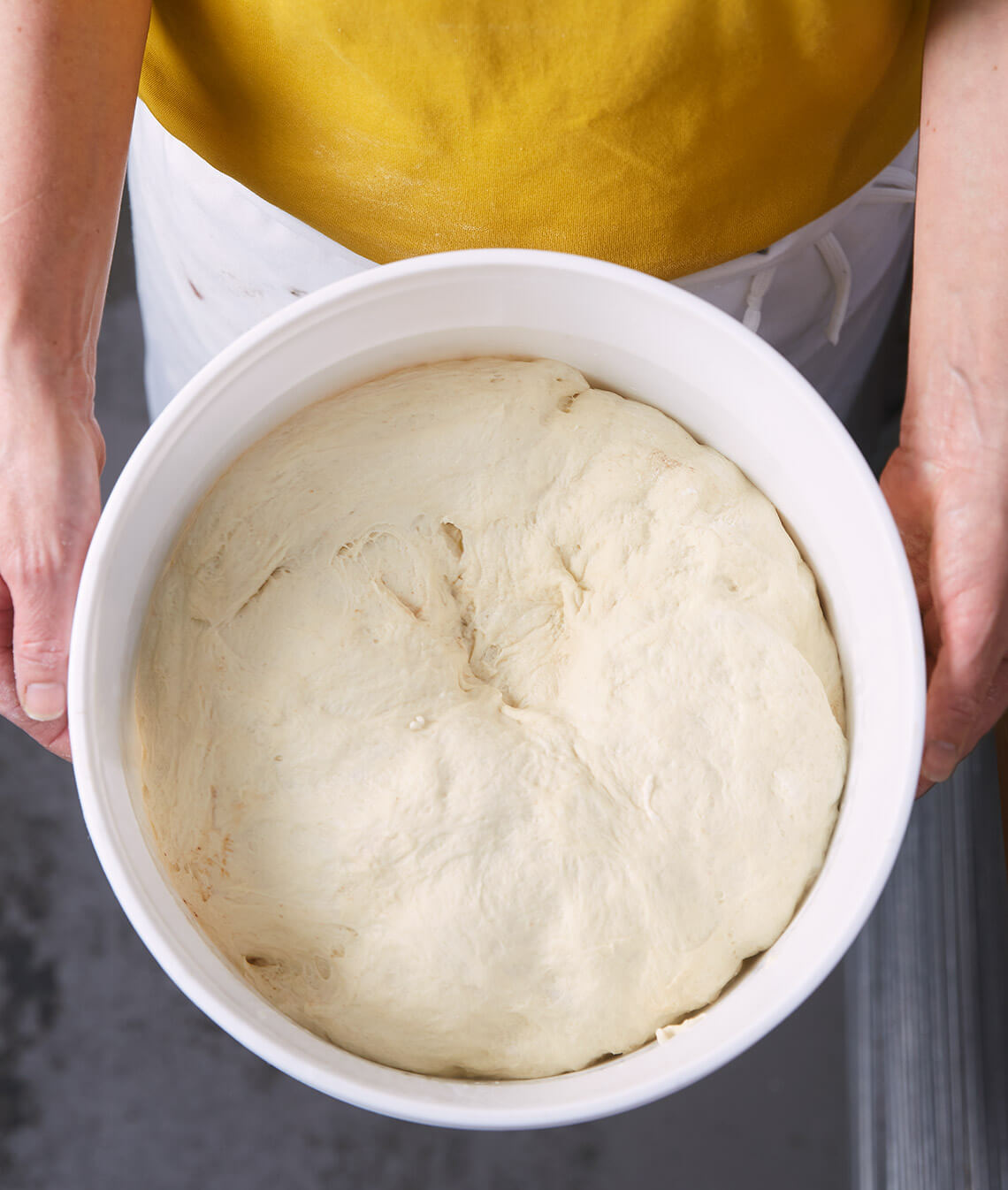 The decades-old starter dough at Mickey’s is fed every day. photograph by Stacey Van Berkel

It may look inert, but starter is a living thing. Throughout the dough, countless yeasts and bacteria eat, breathe, and divide, a jungle of creatures that will help Mickey’s yeast pastries rise, will give them their distinctive texture and flavor.

The starter isn’t the only holdover from Mickey’s beginnings. Melanie keeps notebooks filled with scribbled decorating ideas and recipes from her grandfather. “If I want to pull something out of the dark ages, I’ll go look in the book,” Melanie says. “It hasn’t changed. All the cookies. Cakes. Pies — lemon, chocolate, coconut. The dough. All the same.”

Melanie has been in Mickey’s kitchen since she was a child, when her parents would drop off her and Jerald at the bakery. Their grandfather always let them help. “He would put a piece of dough on the table and let us do whatever we wanted with it,” Melanie says. “We didn’t make anything, but we came home covered in flour.”

Her own children have tagged along since they were 10 days old. “I’d put them in the stroller and stroll them around, and I’d work,” she says. Both children are in high school now, and the stroller has been replaced by a basketball goal in the back of the bakery.

It’s a little after 7:30 a.m., and a bell is ringing in the back of the bakery that signals to Melanie that someone is up front. Already, a steady stream of folks are filing in for their morning coffee and doughnut or cinnamon bun. A young mother and her daughter are picking out mini cupcakes to celebrate the girl’s birthday at school.

“Are these what you want, baby?” the mother says, pointing to a tray of frosted cupcakes. The girl nods without turning around. Her mother follows her eyes to the cinnamon buns, tall as the girl’s hand and dripping with icing. The mother smiles.

“We’ll take two in a bag, please,” the mother says to Melanie. The girl twirls with delight.

Taking something “in a bag” happens a lot at Mickey’s. It’s usually code for “an extra treat to eat on the way.” 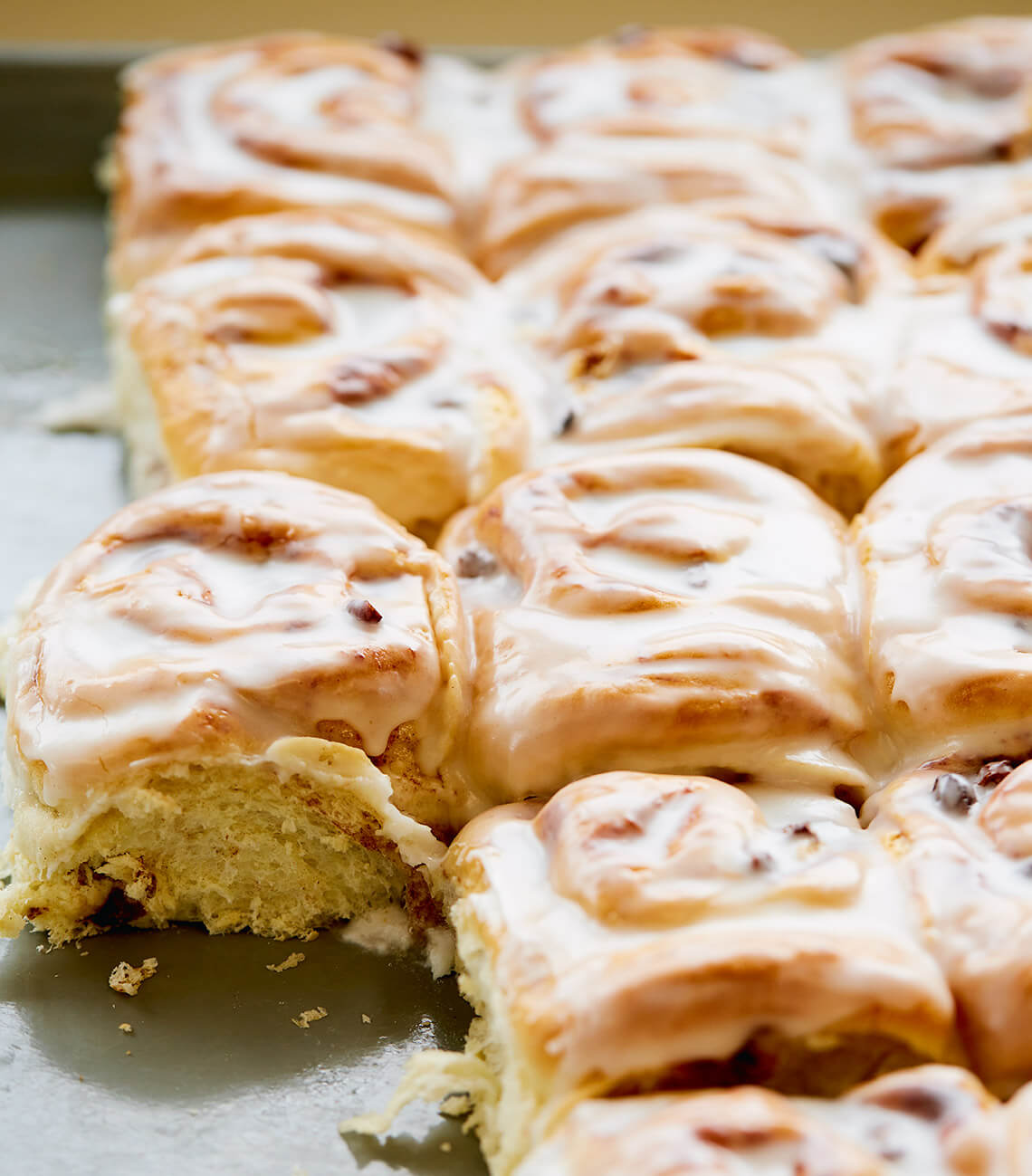 Mickey’s cinnamon buns are a treat for early-risers. The sweet, raisin-studded confections rarely make it through the morning rush. photograph by Stacey Van Berkel

Melanie peeks out the drive-up window and sees a small line of cars. Sometimes everybody shows up at once. The first driver buys a dozen cinnamon buns and two “in a bag,” passing the bag to the young man in the seat beside her. You already know what that means.

The next car is here for cinnamon buns, too, but Melanie is already sold out. He talks himself off the ledge, gets a few cream puffs in a bag. “Seems like the early worm got the bird this morning,” he says.

“Everybody leaves here with something they like,” Melanie says as she closes the window. “This could have been a bad day for him if he didn’t get what he wanted, but he found something he liked.”

And what’s not to like? Mickey’s sells more than 60 different pastries at their front counter and in their line of packaged baked goods. Lemon squares with scattered constellations of sugar on top, better-than-homemade pecan pies, cookies with monster eyes made of icing. Cream horns from my childhood and long johns, which are like cream puffs but shaped like hot dog buns. Some, like the long johns and cream puffs, begin with the ancient starter. Others have different ingredients, but still begin with one of Mickey’s recipes.

Her grandfather’s buttercream-topped cakes — that celebrated the birthdays of great-great-grandparents in Goldsboro — taste the same as the cakes that celebrate the arrivals of newborns. Her not-too-sweet layer and sheet cakes, chocolate or vanilla, wrapped in blankets of icing, are all scratch-made, of course. Like everything else at Mickey’s.

For a time, Mickey, Jerry, and Melanie worked side by side at the bakery, and they decided to become Certified Master Bakers by Retail Bakers of America. They took written tests and a practical exam that rivaled high-pressure TV baking shows. “For the practical exam, you have to make eight products from scratch,” Melanie says. “But only three of those you know ahead of time. Five are a surprise the morning of, and we were surprised!”

Jerry and Melanie passed the exams, and Melanie became the first third-generation Certified Master Baker in the country. Mickey was awarded the distinction for his decades of experience.

Over that time, his love of people reached beyond his kitchen. He refereed ACC football games and brought the exciting stories of coaches and players back to his customers. And he was an advocate for civil rights. “My dad believed that everyone should come in the bakery,” Carole says. “He was one of three Wayne County businesses before the civil rights era of the ’60s that let every person come through the same door. He had the front door open for everyone.”

“We still believe in serving every customer,” Melanie says. “That’s what he would want, and that’s what we want, too.” Melanie and her parents take leftovers to the soup kitchen or hospice to sweeten the days of people who can’t make it into the shop.

The bakery phone rings. Again. It’s been ringing all morning. This time, the person wants a cake.

“Any special colors?” Melanie asks. She writes down the details on a slip of paper and repeats them to the customer on the phone. When she hangs up, she puts the order on a stack of papers as thick as one of her cinnamon buns.

“We write it all down here — no computers,” she says with a laugh, waving her cake orders in the air. “It helps when the power goes out.”

Borden Parker, a Goldsboro lawyer, has been coming to Mickey’s since he was a small child in the first decade it opened. “Mickey was cheerful and friendly, and welcomed anybody who came in,” he remembers. “He was nice to the children. My father would carry me in there on Saturday mornings, and he would visit with Mickey and Hardy Talton.”

Talton was a state legislator for Wayne County in the 1950s who worked behind Mickey’s counter when he wasn’t up in Raleigh. “I can’t answer if Talton was politicking from Mickey’s because I was too young to know,” Parker says. “I was there for the doughnut.”

Melanie glances up before the bell dings and sees someone coming in the front. It’s a woman picking up a cake for her son, who’s in his 20s. Melanie drew an icing dinosaur on the cake, more delicious than ferocious. “He’s really into dinosaurs,” the woman explains. “He always gets a Mickey’s cake on his birthday.”

Anybody who’s had a bite of Mickey’s sweets has experienced something that extends well beyond 75 years. Mickey’s offers faith that, though some of life is greater than we can grasp, we can still share a slice of goodness with people we love. A little sweetness can make a day.

The dough in Melanie’s bucket that’s been pulled to pieces each morning and shared with customers for 75 years is alive, joining us in a legacy that, like the dough, will keep going, as long as we feed it.