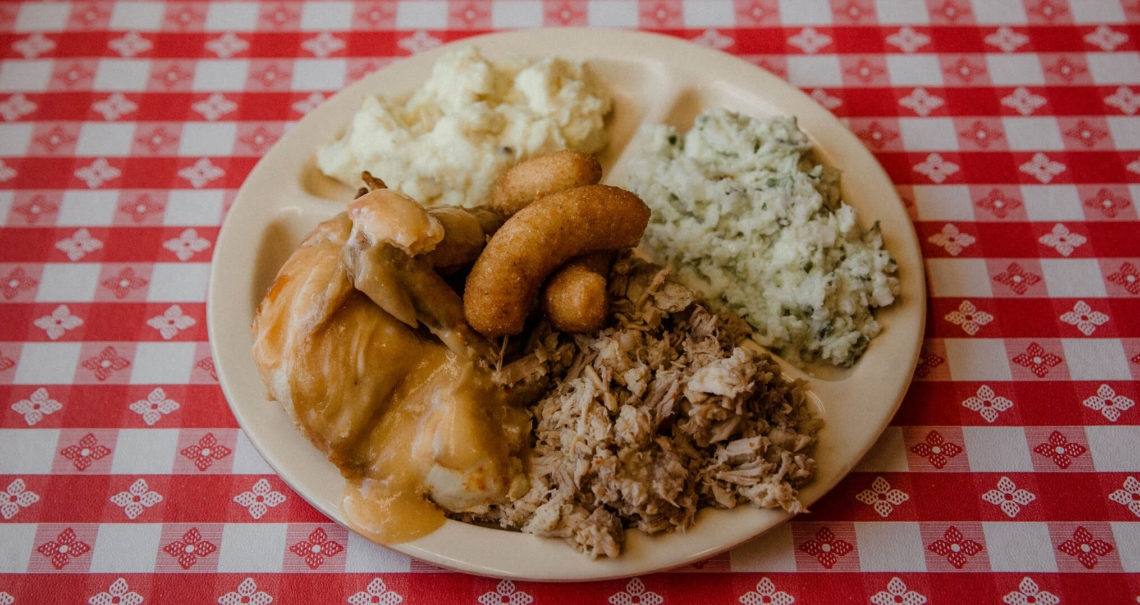 Growing up, Worth Westbrook remembers someone in the community cooking barbecue every Friday night, selling hand-chopped pork and sides to neighbors who lined up for plates.

Westbrook was among the first in line when his longtime friend, Randy McCall, started cooking ’cue. The slow-cooked pork barbecue sold out every week, he recalls.

When the pair stumbled upon a restaurant for lease in Goldsboro, they took it as a sign. McCall’s Bar-B-Que & Seafood opened in 1989. More than three decades later, Westbrook still never tires of eating barbecue. 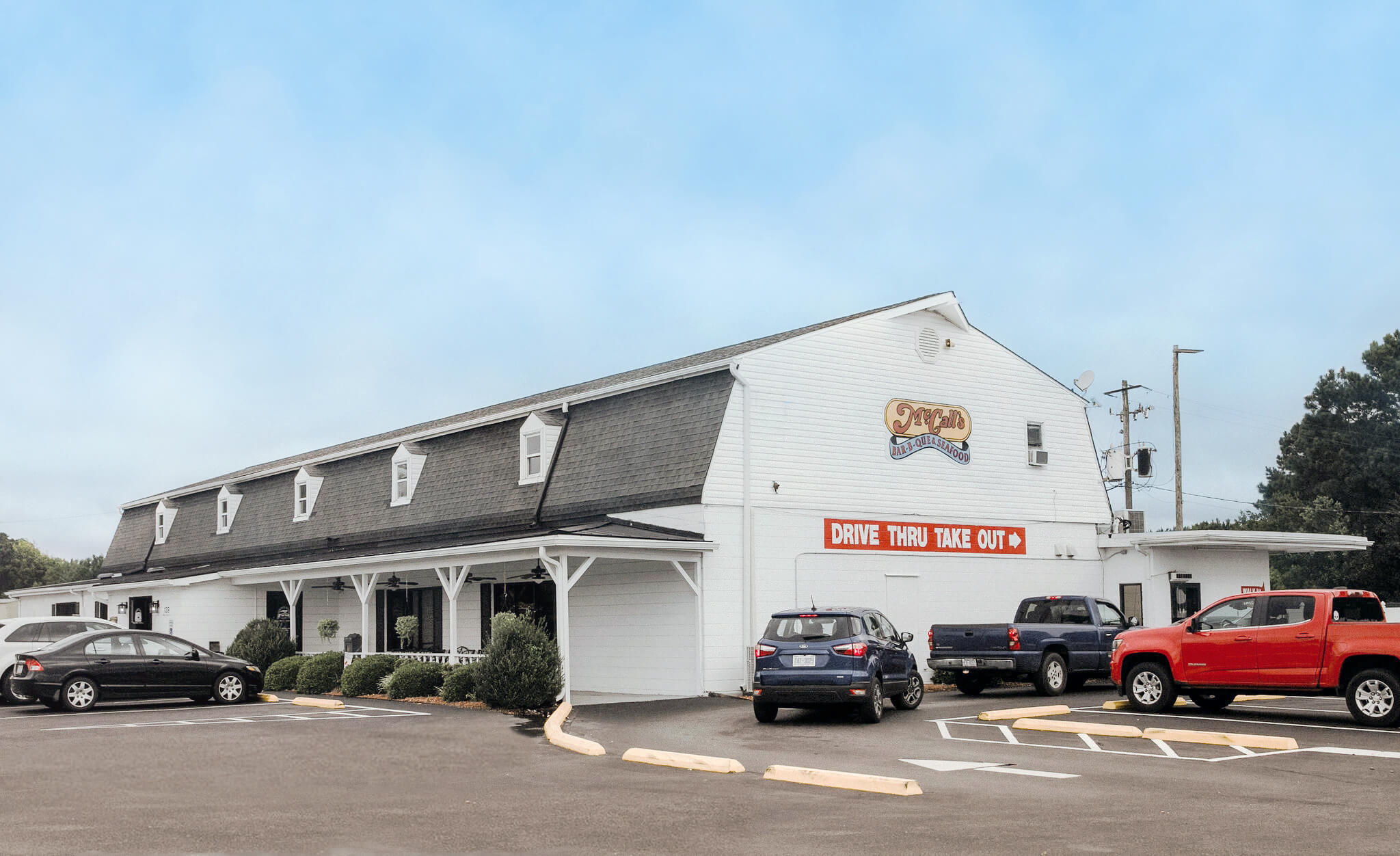 Nightlife just got much brighter

We could go on about our scenic parks, historic sites, and legendary BBQ joints, and brag about the daily airshows we witness as F-15E Strike Eagles soar across our skies, but what Goldsboro’s appeal really boils down to is its originality. 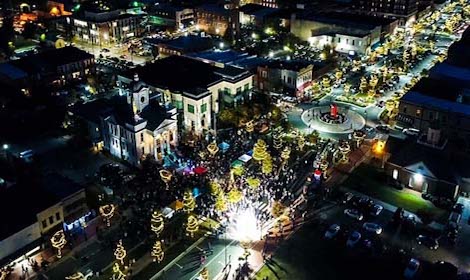 If North Carolina is the best state for barbecue, Wayne County is the heartbeat of whole hog cooking. The slow-smoked meat attracts crowds eager for a taste of home cooking and local history.

“It’s a tradition and an art that got passed down for generations,” says Willis Underwood of Wilber’s Barbecue in Goldsboro. “Wayne County is a barbecue Mecca with deep traditions and lots of pit masters.” 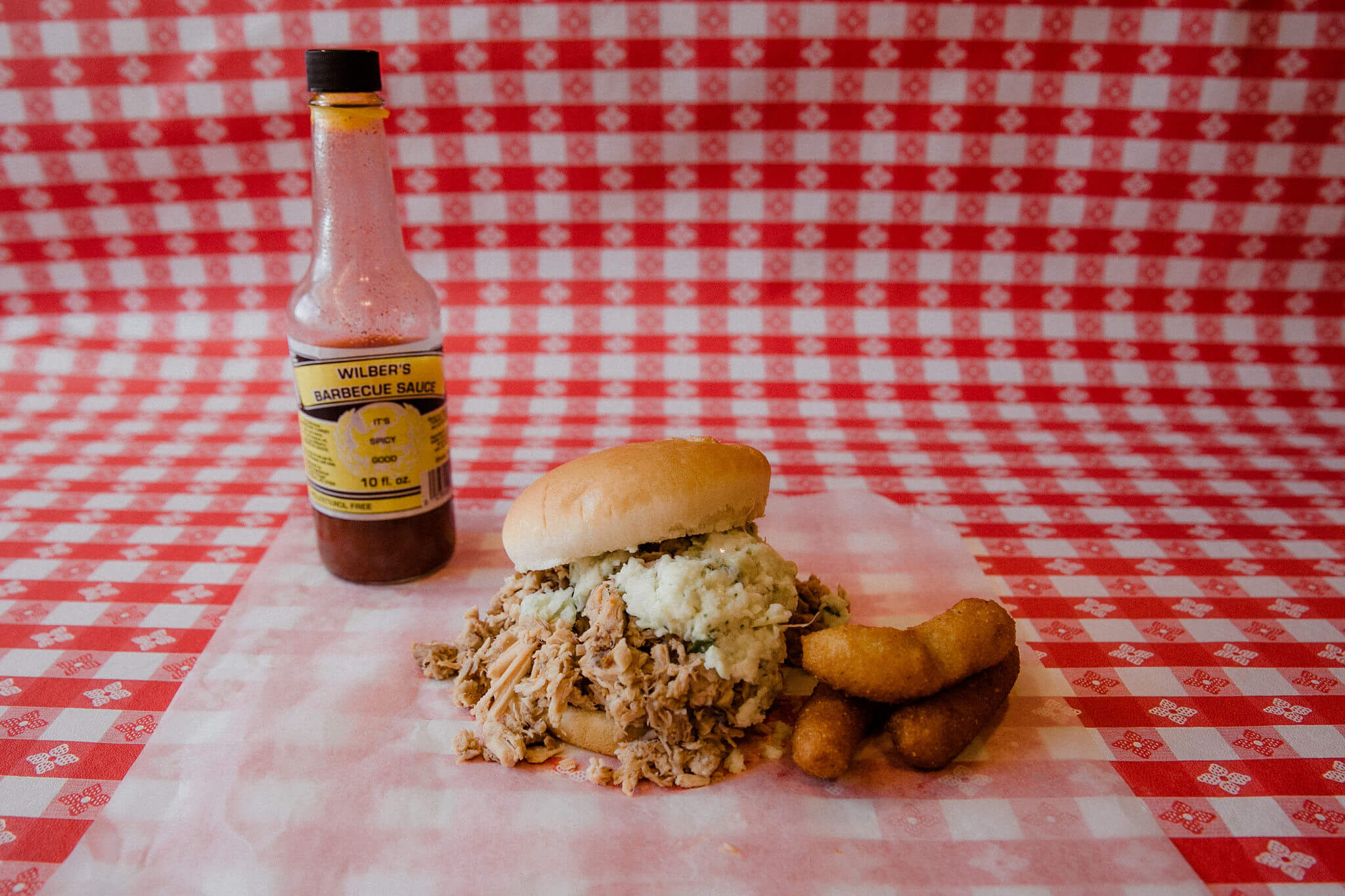 It takes up to 14 hours to cook a whole hog. Barbecue aficionados believe it’s worth the wait. “It’s the most labor-intensive way to cook a pig but the proof is in the taste,” Underwood says. “Part of the tradition is cooking over an open pit — if you’re not cooking over wood, it’s not barbecue.”

The seasoning matters too. At Wilber’s, Underwood makes sure not to add too much seasoning to the pork: “We don’t want to overshadow the oak flavor that we worked so hard to cook into the pork,” he says.

Gerrie Grady perfected an old-fashioned country vinegar-pepper seasoning for the barbecue pork she serves at Grady’s BBQ in Dudley. It’s added to the whole hog that cooks “low and slow” over the burning embers of hickory and oak wood, spending all night on the pit absorbing the smoky flavor into the meat. 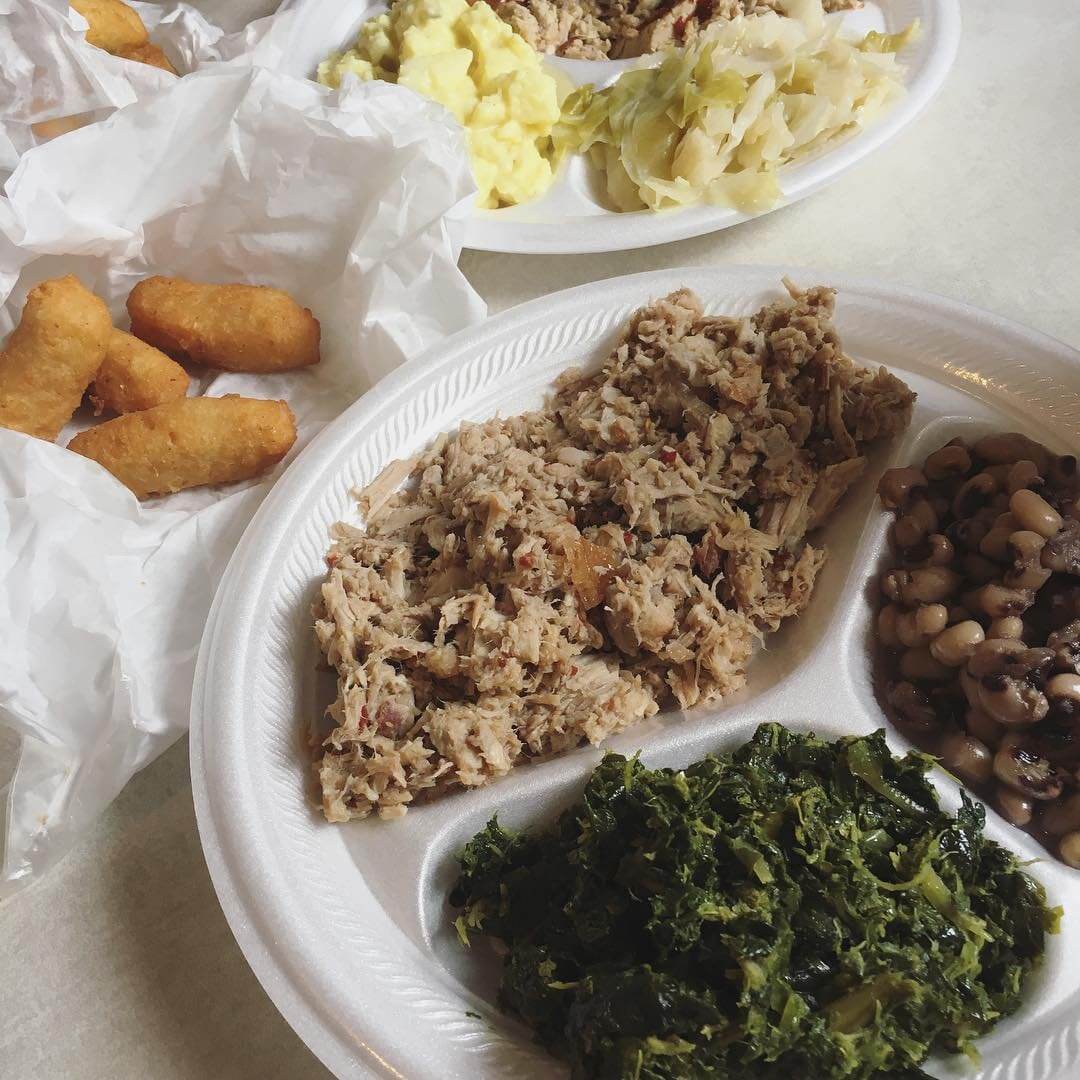 “My momma ran me into the kitchen when I was 10 years old,” Grady recalls. “I learned to cook country style just like my momma, my grandmother, and my mother-in-law, and those are the old-fashioned barbecue recipes we use here.”

The flavors draw a crowd and Grady, who’s operated the barbecue restaurant with her husband Steve since 1986, has hungry customers driving — and sometimes flying — from near and far for a taste.

One regular customer, a pilot who used to live nearby but had relocated to Washington, D.C., flew his plane to North Carolina to order barbecue sandwiches for lunch before flying back home, Grady recalls.

Pit masters might be known for their pork but any North Carolina barbecue joint worth its salt (and vinegar) also cooks up barbecue chicken, slow-smoked ribs, and other favorites — and never skimps on the sides.

Stonewall’s BBQ, which has been around for 30 years, serves up authentic barbecue pork and chicken on the first and third Saturdays of each month, and calls their sauce “Hog Enhancer.” Murray’s Seafood and BBQ dishes out Southern favorites like collards, slaw, and fried catfish in addition to its main attraction. And Adam’s Roadside BBQ makes mac ’n’ cheese with five different cheeses, plus barbecue-topped “totchos” — tater tots covered in brisket, chopped pork, or smoked turkey. Wash it all down with a glass of sweet tea and save room for banana pudding. 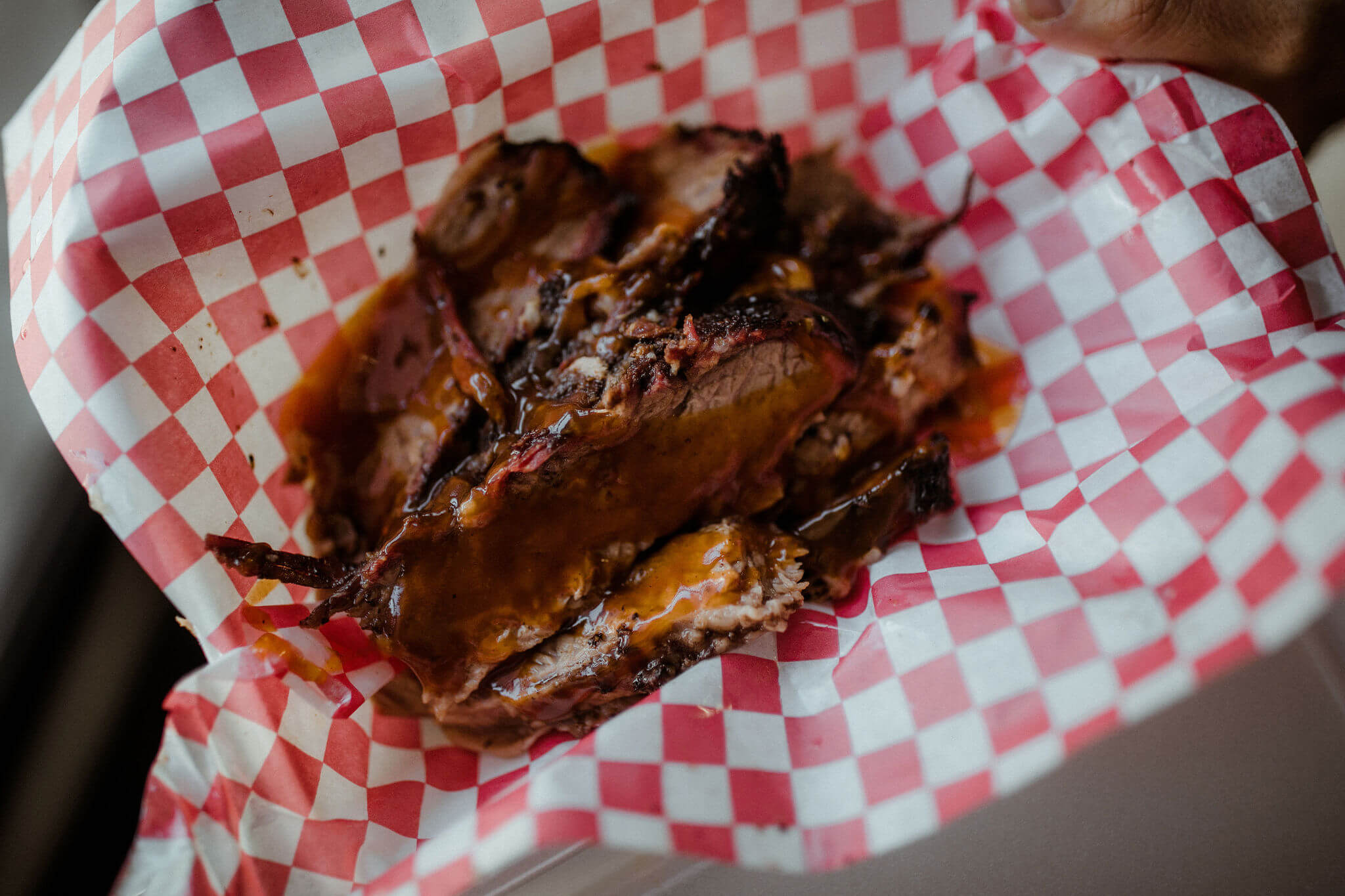 At breakfast, lunch, and dinner, it’s not uncommon for lines to stretch out the doors at the barbecue restaurants in Wayne County. The wait gives you time to work up an appetite and catch up with the neighbors.

“Whole hog barbecue, which is what we’re known for in this part of North Carolina isn’t something most people do at home,” Westbrook says. “It’s part of our heritage. People here love barbecue and are willing to wait for a plate.”

Feeling overwhelmed with delicious options? Barbecue is such a part of Wayne County culture that Visit Goldsboro created a Brews & ’Cue map to highlight the locations of the best barbecue in the region. The pig icons on the map will help you plan your stops.

The Brews & ’Cue map is part of the North Carolina Barbecue Society historic barbecue trail, which features 22 stops between eastern North Carolina and Tennessee. You can download a BBQ Passport and collect stamps from each stop. Fill the passport, bring it back to the Travel and Tourism office (308 North William Street, Goldsboro), and get some North Carolina barbecue swag.

And in addition to mapping the locations of favorites like Grady’s BBQ, McCall’s Bar-B-Que & Seafood, Smithfield’s Chicken ’N Bar-B-Q and Wilber’s Barbecue, the map highlights spots to take a taste of local barbecue back home.