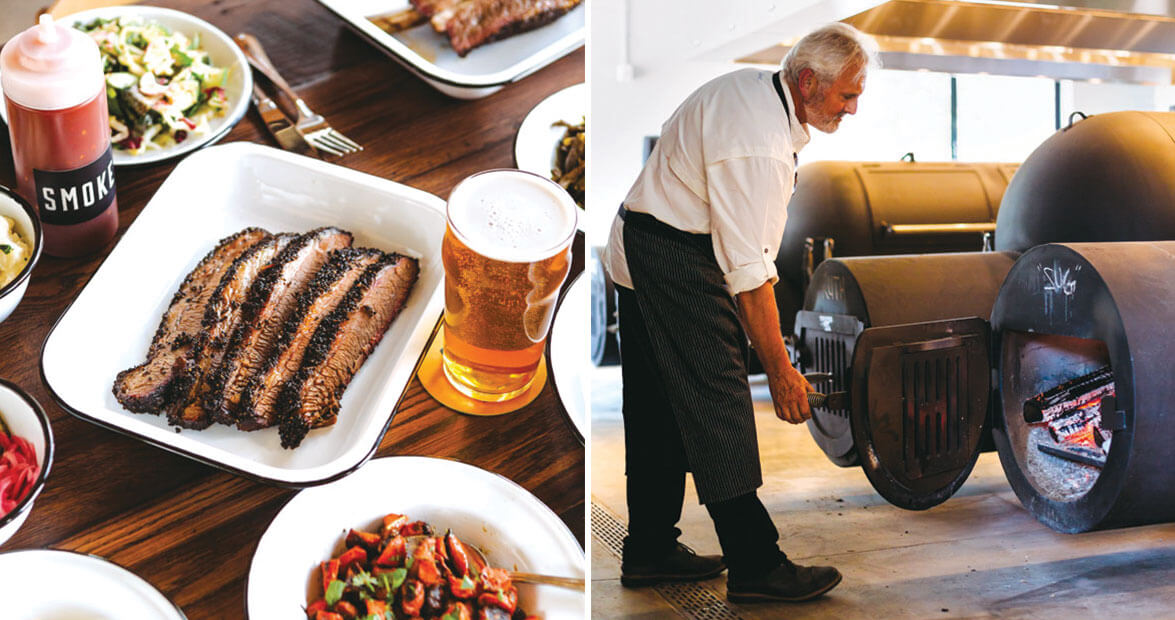 It’s nearly dinnertime, and Aunt Sug, Uncle Boy, Wade, Gilbert, Stamie, and Ruth are hard at work in the 1,800-square-foot smokehouse of the newest barbecue joint in Charlotte, Noble Smoke. The group of six is fired up — and rightly so. They’re the custom-built, Texas-style steel smokers tasked with infusing savory flavors into the pork, brisket, and turkey at Chef Jim Noble’s new restaurant, 25 years in the making. The smokers are named after Noble’s family members primarily for logistical reasons: so the kitchen staff knows which meat is in which smoker. But the naming scheme also pays tribute — as does the entire restaurant — to the history of Southern barbecue, from home cooks to professional pitmasters.

The flags of North Carolina, Texas, and France hang in the dining room as a nod to Noble’s cooking influences. At the “Legends Counter” that looks into the open kitchen, each of the 23 seats is marked with a bronze plaque dedicated to a person who Noble believes has influenced barbecue cooking and culture in a significant way. Many of the names are familiar to barbecue fanatics: Wayne, Rick, and Nathan Monk, owners of Lexington Barbecue, and Adam Scott, the first black owner of a North Carolina barbecue restaurant. “I want to pay tribute to those guys,” Noble says. The counter is his way of saying, “ Hey, y’all have been dancing for 100 years. I just want to join the dance; I just want to do barbecue.”

Noble, who owns four acclaimed restaurants in Charlotte and Winston-Salem, hasn’t opened a new spot in seven years. He vowed that the next one he launched would be a barbecue restaurant. Now, after “going to school,” as he says, with some of the barbecue greats — including the Monk family and Aaron Franklin, owner of Franklin Barbecue in Austin, Texas — he’s fulfilled his vision and wants North Carolinians to be as “fired up about barbecue” as he is. We’re ready.