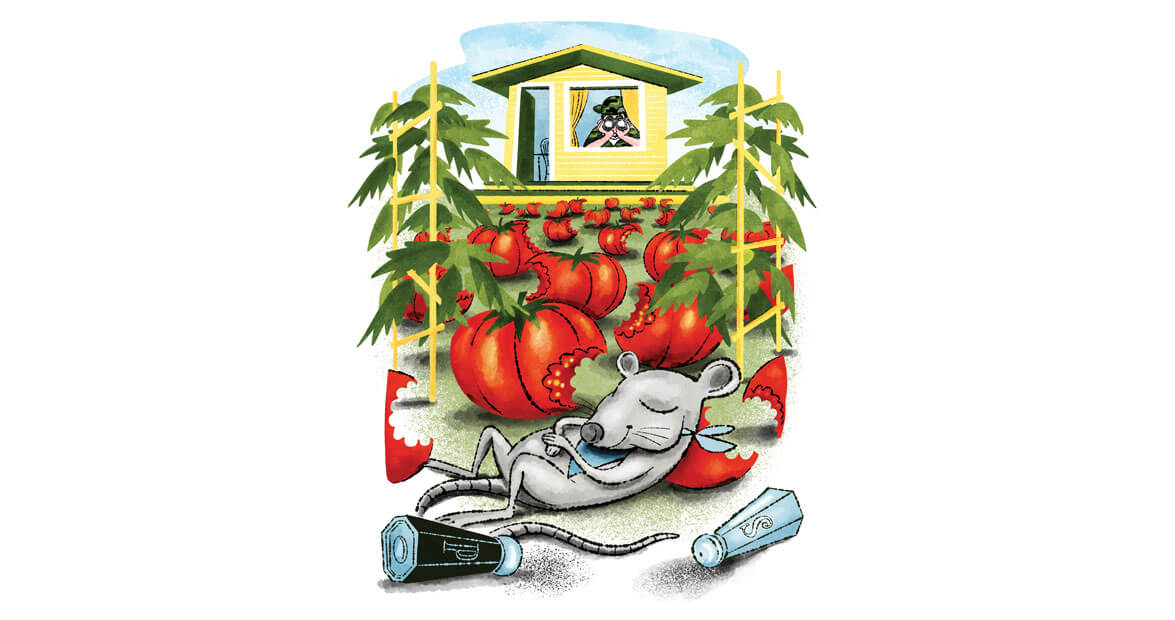 I’m not going to look up the statute of limitations on discharging a firearm within Greensboro’s city limits, and I’m not going to look up whether a pellet gun qualifies as a firearm, and I’m not going to say whether or not I actually did this deed quite a long time ago. Though I did. Or, in theory, I certainly could have. It was a pistol, if that matters. A borrowed pellet pistol. Or, if that turns out to be what matters, it wasn’t. And I didn’t do it. But the rat — an actual gray rat — was eating my tomatoes.

This was in my first house, in my first writing shed, at a desk that faced my second garden. My first garden had been out front of the house I’d rented while in grad school: The late, great Jim Clark, my neighbor and the director of UNCG’s MFA writing program, had stood in that garden with me to hold a tarp over our young tomatoes in a hailstorm. Jim loved a tall tale; Jim loved plausible deniability. Much later on, Jim loved my rat story, mainly because neither Jim nor anyone else I’ve ever known can believe that I had the moxie to stake out a rat from the window of a writing shed and then shoot it to death, with a borrowed sidearm, in flagrante tomato. God, I loved Jim.

I was writing my first novel at the time. The rat time. I was doing all of this — writing, gardening, living in North Carolina in the first place — because of Jim. He’d called me during the freak April Boston blizzard of 1997 (I was an Atlanta native, up there chasing an old girlfriend; it was doomed, but we were trying anyway) to tell me I’d gotten into UNCG. I came back down South. Jim was a great teacher: He taught me to plant tomatoes sideways and at night; he taught me to avoid the authorities when necessary; he taught me to think I might deserve something as absurd as a desk in a writing shed.

It was sunny. Summer. I was newly engaged. Something had been eating our tomatoes. Not whole tomatoes — just a bite or two out of each huge Cherokee Purple, half of each Sun Gold. Squirrels, we thought. Or hoped. I was at the desk. Looked up. Something was wrong with this squirrel: It wasn’t quite the right color, and its tail looked sickly. It took a long time for the word to spool itself out on the wall inside my head. Rat.

My buddy said, It’s just a pellet pistol.
Same same, I said.
No, he said. You’ll be fine.
Will it kill the rat? I said.
Practice, he said. But yes.

A beer can is about the size of a rat. I laid them on their sides, shot at them in the backyard. Mostly, I hit them. The stakeout, then: I was ready. Writing shed window cracked open, screen removed, me practicing sniper breathing, waiting, waiting. Here came the rat — yes, I thought there was one, only one — along the top of the chain-link. Here he was choosing a cherry tomato. Here he was pulling it from the vine, here he was eating it, here I was squeezing the trigger, and my aim was true …

Hunters and true Carolinians and fuller-moxied persons than I will scoff at what I tell you now: I’ll never do it again. It was horrible. It took time. I changed religions twice while that rat died. I was proud and on the verge of tears all at once. I was sorry. I was triumphant. I hired a professional that very evening so that I could restore the proper distance between the actual moral consequences of my decisions and my everyday life.

Here’s where Jim would tease me: It’s just a rat, he’d say, and then launch into some story about a child-size rodent that had crawled from the sewer quoting Baudelaire, or a herd of rats that came right down the middle of the street after a hurricane, walking in formation. With Jim, you never knew what was true, and that was fine: We were in town — some of us, anyway — to learn fiction. To learn story before truth.

I did, though, I’d tell him. I did shoot that rat.

You? he’d say. You, who turned up in this town wearing khaki pants with your shirt tucked in? No. Not you.