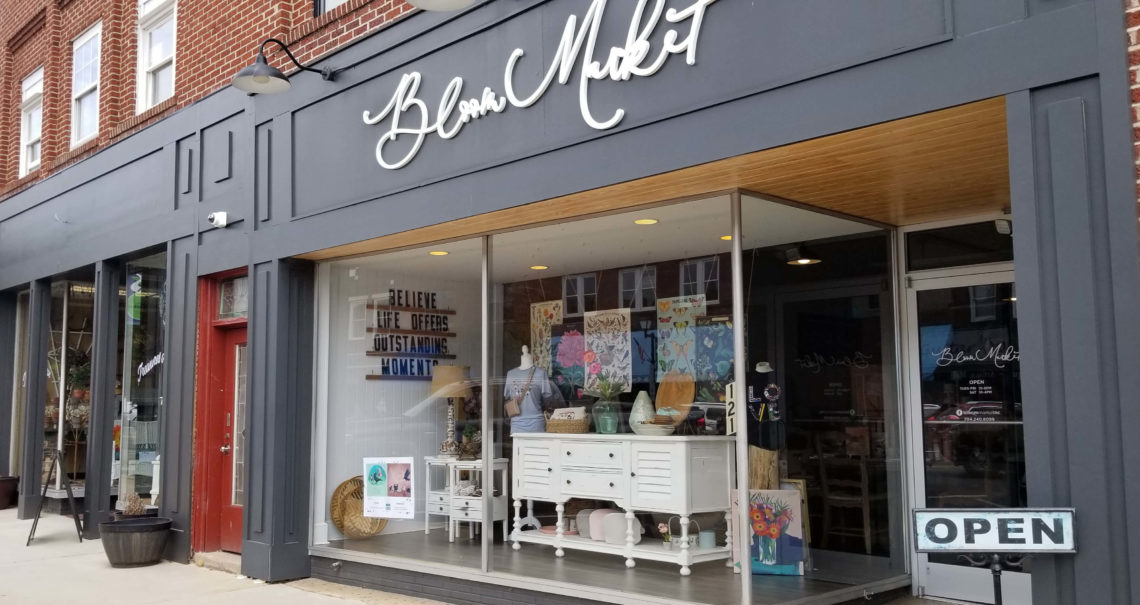 Tucked in the foothills between Charlotte and the Appalachians is a small town that looks, at first glance, like it might be stuck in time. The Lincoln County courthouse presides over Main Street, where local proprietors prop open their doors, welcome locals by name, and water their street-side blooms. People wave and stop to chat, while kids scamper around on the sidewalks. If Lincolnton sounds like a Norman Rockwell painting, well … you’ve got part of the story.

Look a bit closer, and you’ll see this tight-knit community hasn’t dug its heels into the past — far from it. Lincolnton’s throwback vibe is the direct result of looking forward, reinventing small-town life with a spirit of welcome at its core. “There’s a sense of honoring the history of this place but bringing new life,” says Lincolnton native and Bloom Market owner Beth Sexton. “It really feels like we’ve hit a sweet spot.”

For visitors, that sweet spot means an only-in-Lincolnton take on the old and new — Revolutionary War history alongside funky folk art, local grits with breakfast, and craft beer with dinner. A thriving historic Main Street, eclectic eats, and abundant creative energy make Lincolnton a weekend escape that leaves you with a satisfying sense of place.

Experience for yourself why this small town packs so much sizzle. Tucked between the Blue Ridge Mountains and the city lights of Charlotte, this vibrant downtown boasts shops, breweries, and cafes, featuring distinctive arts, artisans, and active living. 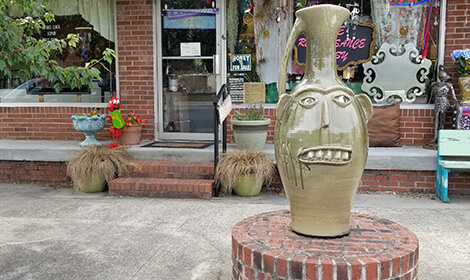 Settle into White Rose Manor Bed & Breakfast, then start your weekend at City Lunch. You’ll walk through the same screen door that welcomed diners in 1932, and everything from the menu to the chatty staff will pull you into the restaurant’s storied history. “We’re old-school,” says owner Angie Greer. “If we don’t know you when you get here, we’ll know you before you leave.” Order the classic meat and three or choose the local favorite — two hot dogs all the way, with chips and an RC Cola for $3.85.

Next, shake off your travels with some easy-going adventure. At Ramsour’s Mill, you’ll step back in time to a foggy morning in 1780, when the outnumbered Patriots scraped a victory at the Battle of Ramsour’s Mill. “It was an ‘aha’ moment for the British,” explains Cathy Davis of the Lincoln Cultural Center. “They realized the revolutionaries weren’t just gonna lay down — they were gonna fight.” 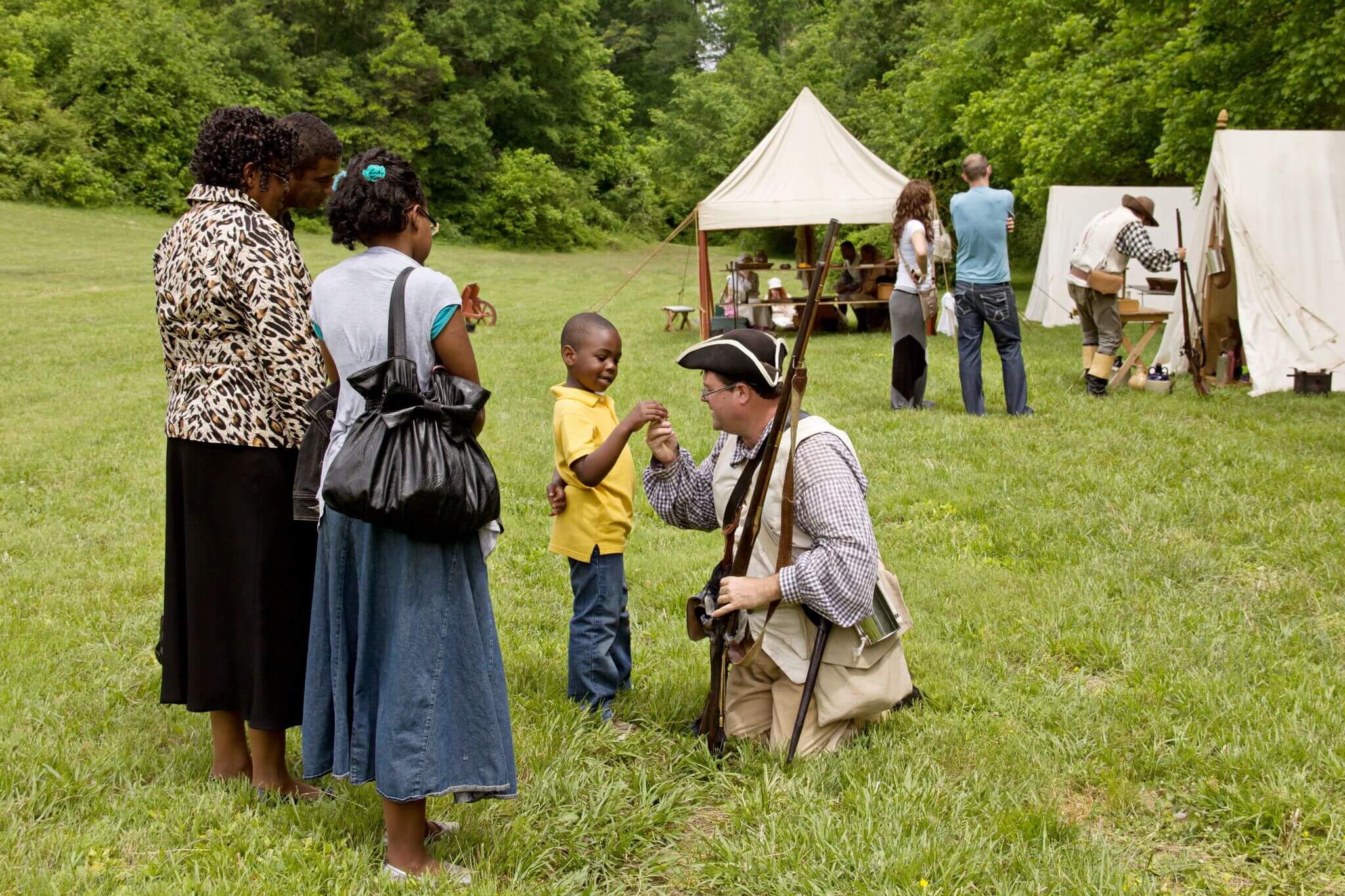 At Ramsour’s Mill, you’ll step back in time to a foggy morning in 1780, when the outnumbered Patriots scraped a victory at the Battle of Ramsour’s Mill. photograph by Melany Dawn Adams Photography

Put in a kayak or canoe at the River Launch at Betty G. Ross Park, and enjoy “The Blueway” — two miles of easy, scenic paddling down the South Fork of the Catawba River to Laboratory Mill. Then head downtown to Untapped Territory, Lincolnton’s hub for craft beer, regional wine, and community camaraderie.

Even older locals who initially raised an eyebrow at the idea of a bar on the Courthouse Square have been won over by the beer hall’s food trucks, live music, welcoming fire pit, and family friendly atmosphere. “We work with people to figure out what their tastes are,” says Marie Kenyon, who owns Untapped Territory with her husband, Brian, and sons Adrian and Bones. “With 21 taps, we always find something they enjoy!”

When you’re ready to head home, call the local Uber-alternative, Goober Ridez. This fleet of electric golf carts, which began as something of a novelty, has become a beloved staple of Lincolnton life.

Fuel up with breakfast at White Rose or grab pastries and a custom cup of joe from the quirky local roastery Fausto Coffee. Then head to the Lincoln Cultural Center for a look at the fascinating and diverse work of local artists.

In the galleries and halls of the Cultural Center, you’ll get to know the work of famous local potter, Burlon Craig, and his Catawba Valley Pottery groundhog kiln technique; Lem Nolen, the state’s first male cosmetologist, who devoted himself to folk art at age 70; and the annual Arts Council Quilt Show, featuring a wide variety of designs, some almost 200 years old.

Grab lunch at a downtown eatery — Vittles, Court Street Grille, or The Meating Place are sure bets — then spend the afternoon embracing a small-town pace. Poke around the shops, ducking into Treasures on Main, Just Around the Corner, or Owl’s Nest for antiques, Bloom Market for trendy home goods and gifts, and 7th Moon Boutique or Bennys Boutique for top-name styles and “Southern finery.”

Take your time on a mason jar milkshake at Scoops by the Square, and don’t miss North State Books, a true reader’s haven. With an emphasis on Southern literature, North Carolina history, and children’s books, the space is a maze of precarious stacks hiding first editions and signed copies — “It’s a real treasure hunt,” co-owner Richard B. Jones says.

Before firming up your evening plans, check The Linc for walking tours, street murals, and events. While the Cultural Center often hosts well-known acts, don’t write off local performances. This is a town where the Lincoln Theatre Guild sells out every show, every time. Cathy Davis says you really can’t go wrong in the historic space: “There’s not a bad seat in the house!”

Enjoy a creative wood-fired pizza for dinner on the patio of Good Wood Pizzeria & Bakery, then end the day at laidback Bricktree Brewery — a welcome addition to downtown’s historic Eureka Cotton Mill. Owners John Brinsfield and Fritz Hugo Steckler recommend the Lincolnton Lager, a local favorite. But never fear, adventurous travelers: Brinsfield and Steckler keep experimental batches on rotation “with the seasons and whatever strikes our fancy.”

Enjoy brunch with a flourish at Local Roots and Provisions — a restaurant, bar, and market with creative takes on Southern classics. Their brunch menu is as local as it is leisurely, and their Southern-inspired cocktails run deep with history, a nod to the restaurant’s spirit. Owners Ethan and Rachel Herman and Deana and Wes Spainhour — husband and wife teams who are also neighbors — say Local Roots is invested in both the past and future of Lincolnton. “Even in our name, we wanted to show we’re rooted here, growing with the community as it grows,” Rachel says. 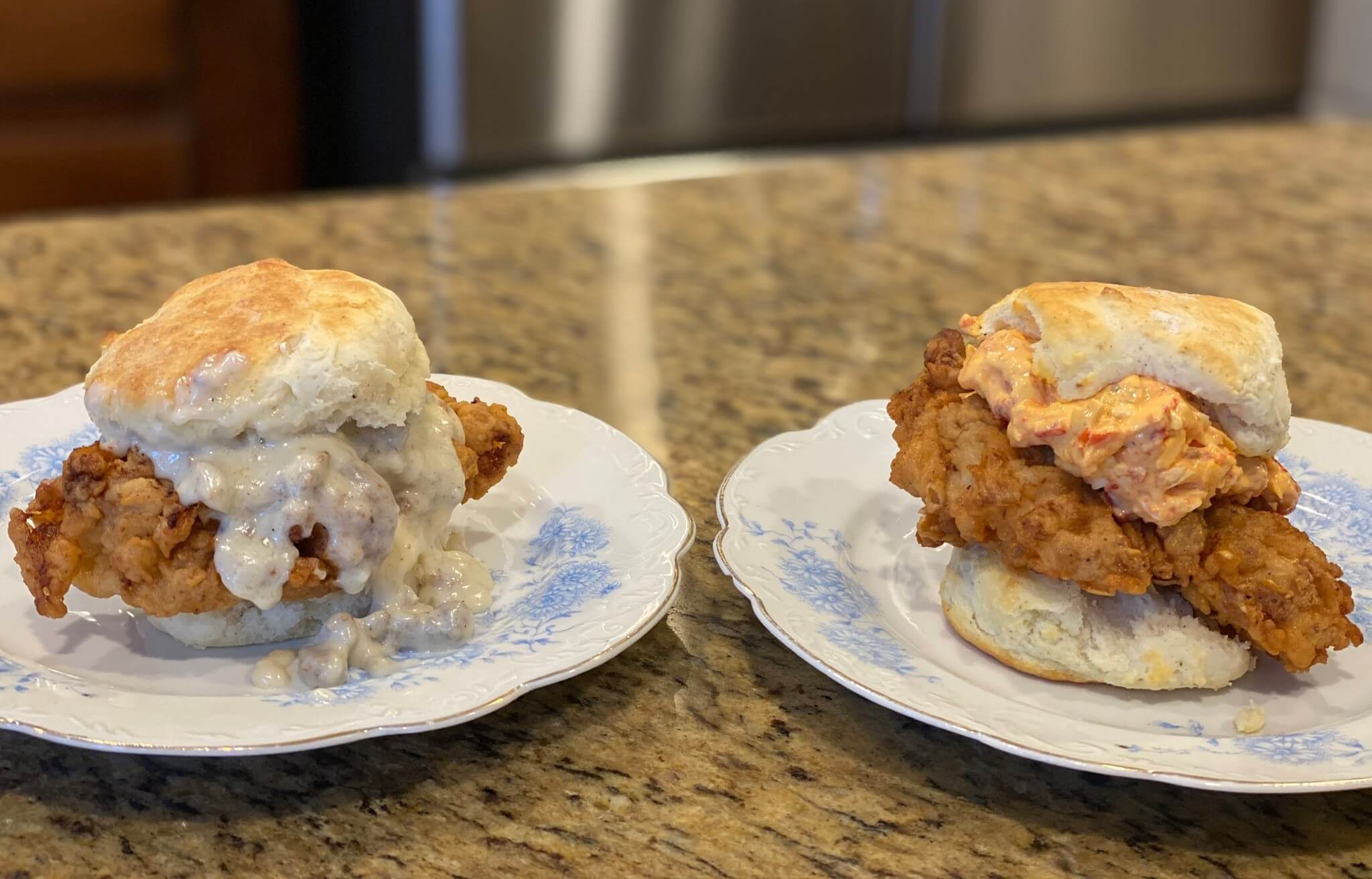 The Rail trail is a quintessential example of what Lincolnton does best — mixing old and new, history and innovation, small-town charm and wide-open welcome. “Before I moved here, I thought Main Street USA was a thing of the past,” says Untapped Territory’s Marie Kenyon. “But Lincolnton’s found a way to keep it relevant, and I’m so grateful to be a part of that.” 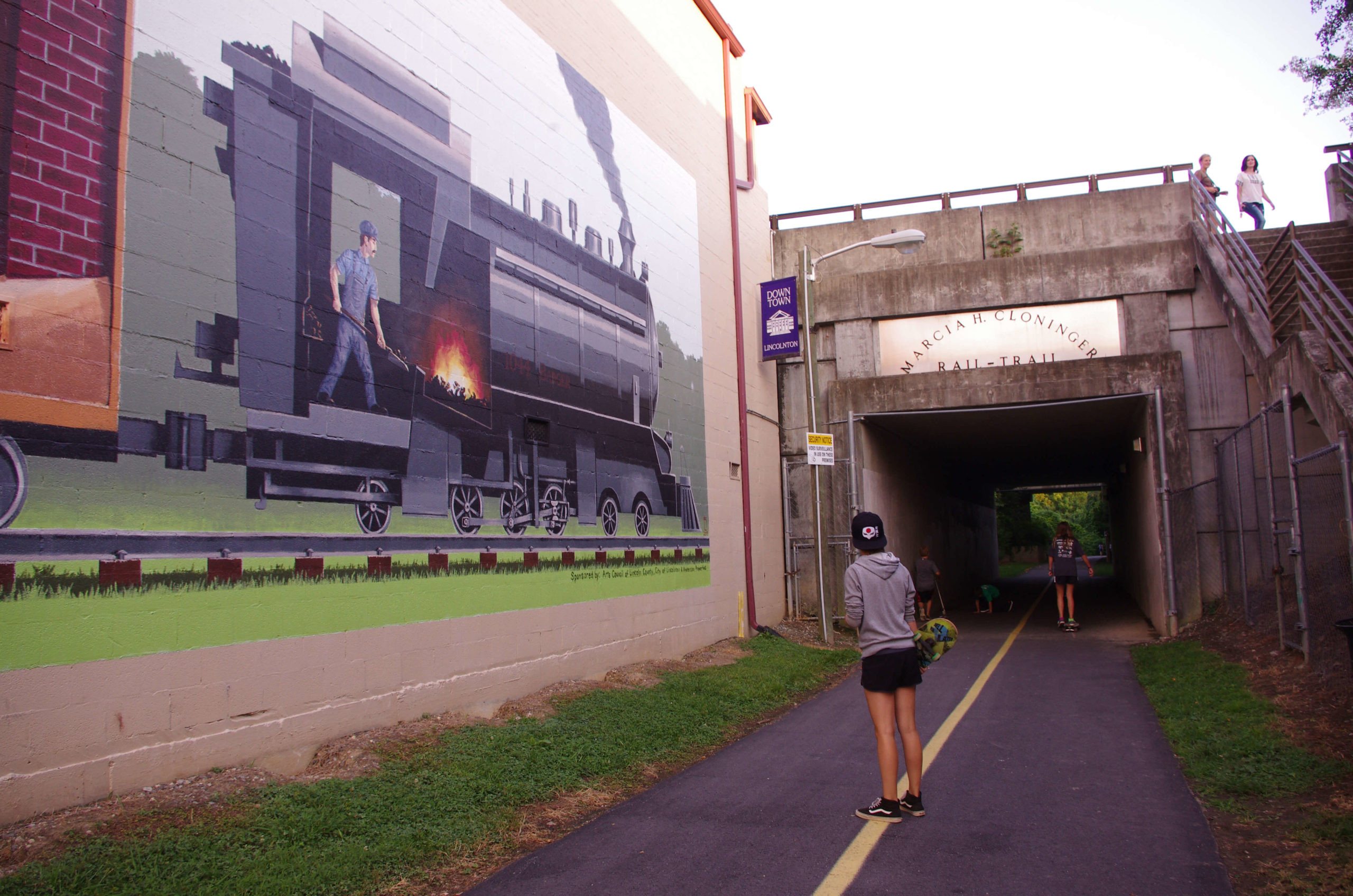