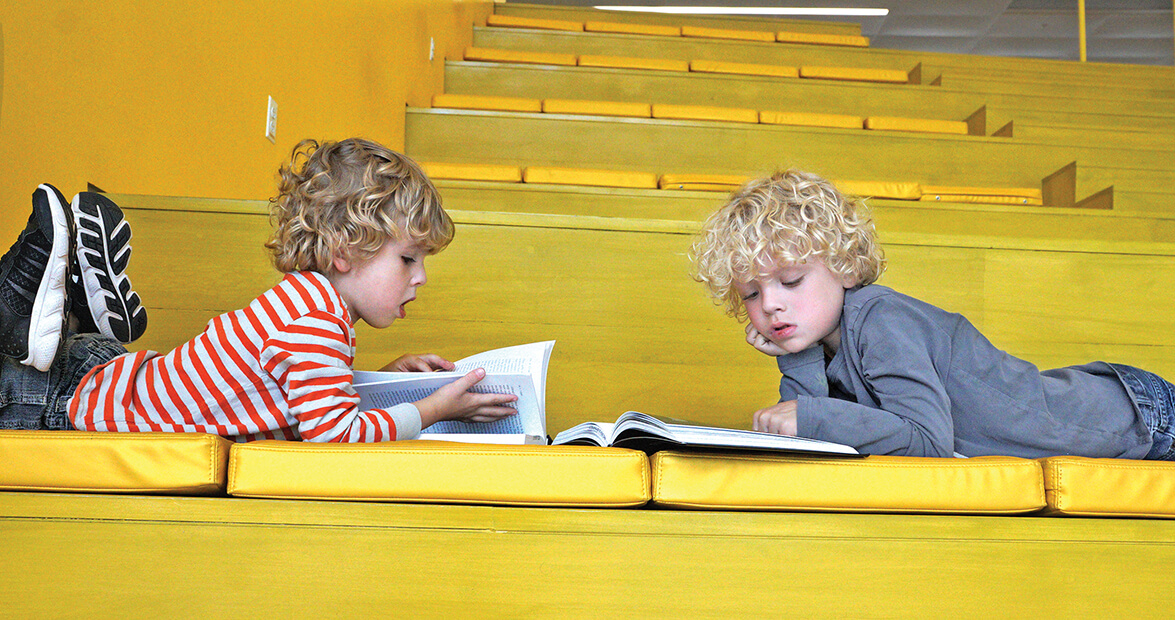 The Hunt Library rises from NC State’s campus like a whaling ship, or maybe a whale itself, and it seems, to this layman, like an architectural triumph. It’s all glass and aluminum, and suggests water, but also motion, and sky, and flight. If it’s not quite counterpoint to the more anchored, neo-Georgian brick buildings all around, perhaps it’s a suggestion that books, and, by extension, thought itself, need not be anchored to anything at all, but rather might always be aiming over the horizon, setting sail, lifting off, exploring. Slipping the surly bonds of earth, and all that. Something. But it’s that something that I can’t quite fully grasp, because I can’t quite concentrate, because my little one, The Wee, has yanked open the big glass doors and taken off into the library at a dead run, hollering, “Yellow stairs? Awesome!”

Technically, we’re here to see the bookBot, not the building. I promised my kids a robot that could retrieve, at a keystroke’s command, books about snakes and cowboys and orbital flight. So we’ve day-tripped to Raleigh, and I’m now retrieving The Wee from those yellow stairs while The Toad, my second grader, tracks down a brochure and assumes full command of our mission. “The bookBot is located just around the corner,” he announces to the entire hall. I look around: Mercifully, there is no signage that says we need to be quiet.

It’s hard not to be impressed by the bookBot setup, by the huge viewing window and the endless bins and the sheer efficiency of it all: 1.5 million volumes are housed, sorted by size and frequency of use, in a fraction of the space that would normally be required. It’s hard, also, not to be impressed by the bot(s) themselves, which roam the stacks like forklifts crossed with the future. There’s a touch screen on the wall, and The Toad types “space capsule” into the search engine. The Wee discovers the “Demo the bookBot” button, and we spend the next 30 minutes right there, the boys issuing what they think are commands to the robot and then sprinting to the benches in Robot Alley, watching the fancy forklift go. At one point, The Toad turns to look at me between bookBot sorties. He doesn’t say anything. He’s just checking to make sure I see it, too.

Eventually we do tour the rest of the library. The Wee, who has his own brochure by now, says, “In a quarter-mile, there’s a game room and a dance party.” There’s no dance party, but there is a game room, plus a few virtual reality booths, high-end music studios, and a 3-D printer — none of which are geared toward wild beasts like mine, and much sadness and lodging of complaints ensues. The boys are placated somewhat by the 80 different kinds of chairs in the library — the overall effect of the furniture is something like museum meets Dali-inspired playground — and they’re soothed, too, by the architecture itself, all this open space and soaring glass. They’ve never been in a building quite this … intentional. The Toad finds a book about space suits in the stacks, and The Wee pulls a slim volume about child psychology, and that holds them long enough for me to discover that there’s an ice cream parlor on the first floor.

The ice cream, Howling Cow, is made from NC State milk from NC State cows, we learn. My boys take their Wolf Tracks cones out onto the Oval, where we eat in the shadow of this huge building. “What was your favorite part?” I ask them.

“The elevators,” The Wee says. “Pushing the buttons.”

“Daddy,” he says, looking up at the library, imagining liftoff. “The robot, of course.” He takes another bite. Looks at me. “Can we come here again? Can we come tomorrow?”

Maybe not tomorrow, I tell him, but yes, kid, yes. We can very definitely come back to the library.