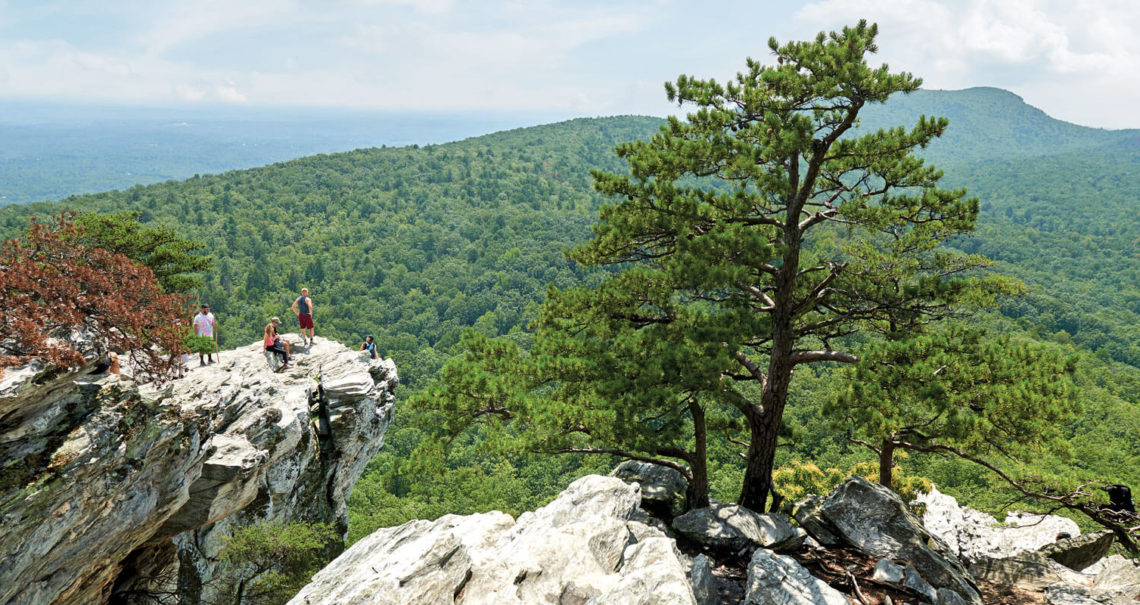 The smoke lingering on NC Highway 66 around John Brown’s Country Store and Grill is the first clue that this is no ordinary Saturday. Known for its bustling short-order grill that serves up burgers and hotdogs, fried thick-cut bologna and pork tenderloin, the family-run operation fires up its smokers out back a couple times each season for Smoking Saturdays.

Brian “Tic” Brown, who runs the store with his siblings Scott and Kim, tends the pork, chicken, and ribs that hikers pick up on their way to Hanging Rock, 10 miles up the road. Passersby know the meat’s done when Tic flips the switch on the outdoor sign that reads Smoking Up a Storm. “About everybody that goes to Hanging Rock comes by here first,” Tic says.

The regulars know to bring a cooler to fill with picnic supplies, snacks, and the store’s renowned pimento cheese — made by longtime employee Daniel “Squint” Mabe.

Tic’s parents started a little roadside stand that evolved into a small grocery and eventually added a grill, and the kids grew up right alongside the business.

“We’ve changed over the years to keep up with customer needs,” Tic says. “We still do. The way we stay open is to pay attention to our customers and be the place they can find what they’re looking for.” 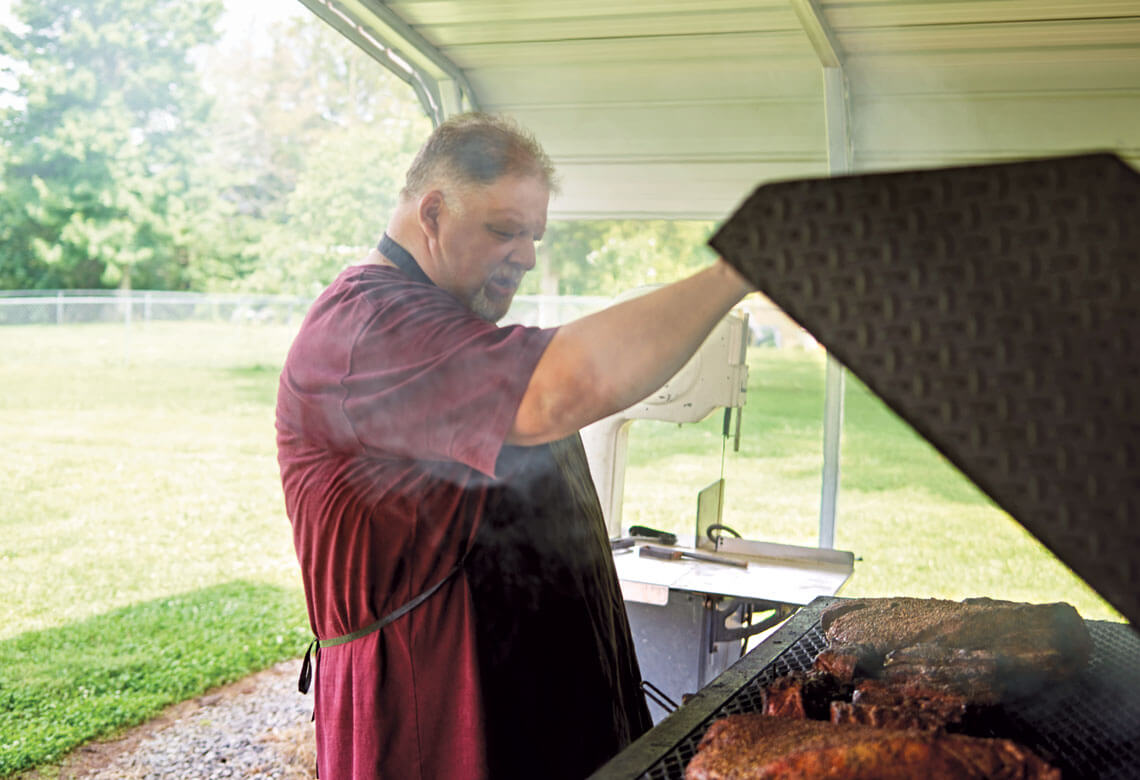 Scott Brown takes his turn at the smoker at John Brown’s Grill. photograph by Joey Seawell

The grocery area of the store isn’t huge, but it’s filled with a variety of items: from pantry staples and fresh produce to country ham and homemade fried pies. It’s easy to come in for one thing and quickly pick up an armload. There’s an entire wall of sauces, preserves, pickles, and relishes, including a long shelf devoted to hot sauces and a line of salsas called As Good As It Gets, made in nearby Rural Hall.

The Browns package several of their signature salads and spreads in grab-and-go deli containers — just the thing for packing a picnic. A few steps away are barrels of bulk candy, including old-time favorites like Mary Janes, caramel creams, peanut butter bars, circus peanuts, and orange slices — sweet treats for a scenic drive.

Stacked next to the register are homemade bread and rolls, and single servings of banana pudding and fruit cobbler.

In the fall, people flock to John Brown’s for its signature chicken stew, a serious tradition in Stokes County. The term “chicken stew” refers not only to the dish, but also to the occasion where people gather to eat it. Tic explains, “It’s unconscionable to turn down an invitation to a chicken stew. If you get three invitations, you go to all three and eat at all three. And then still stop by here for some more.”

No two Stokes County cooks use the same method for making their stew, which is traditionally cooked outdoors in big black pots over an open flame. The only constant is that pride and swagger are involved, plus chicken, of course, but never vegetables. The Grill’s recipe for its beloved chicken stew — which the Browns serve about 10,000 gallons each fall — is a closely guarded secret. All that Tic will say is that their recipe melds traditions and multigenerational practices from his family and his wife’s family. “It’s the best,” he adds with a grin.

Highway 66 is one of many winding, two-lane roads that invite driving enthusiasts to explore Stokes County’s rolling hills and farmland — all set against the ever-present backdrop of the Sauratown Mountains. The countryside is a big draw here, but the centerpiece of the region is Hanging Rock State Park. After Hanging Rock was named a state park in 1936, the Civilian Conservation Corps spent the next seven years carving out the first hiking and climbing trails, building picnic areas and parking lots, and scooping out a 12-acre lake bed that was then filled with dammed creek water. 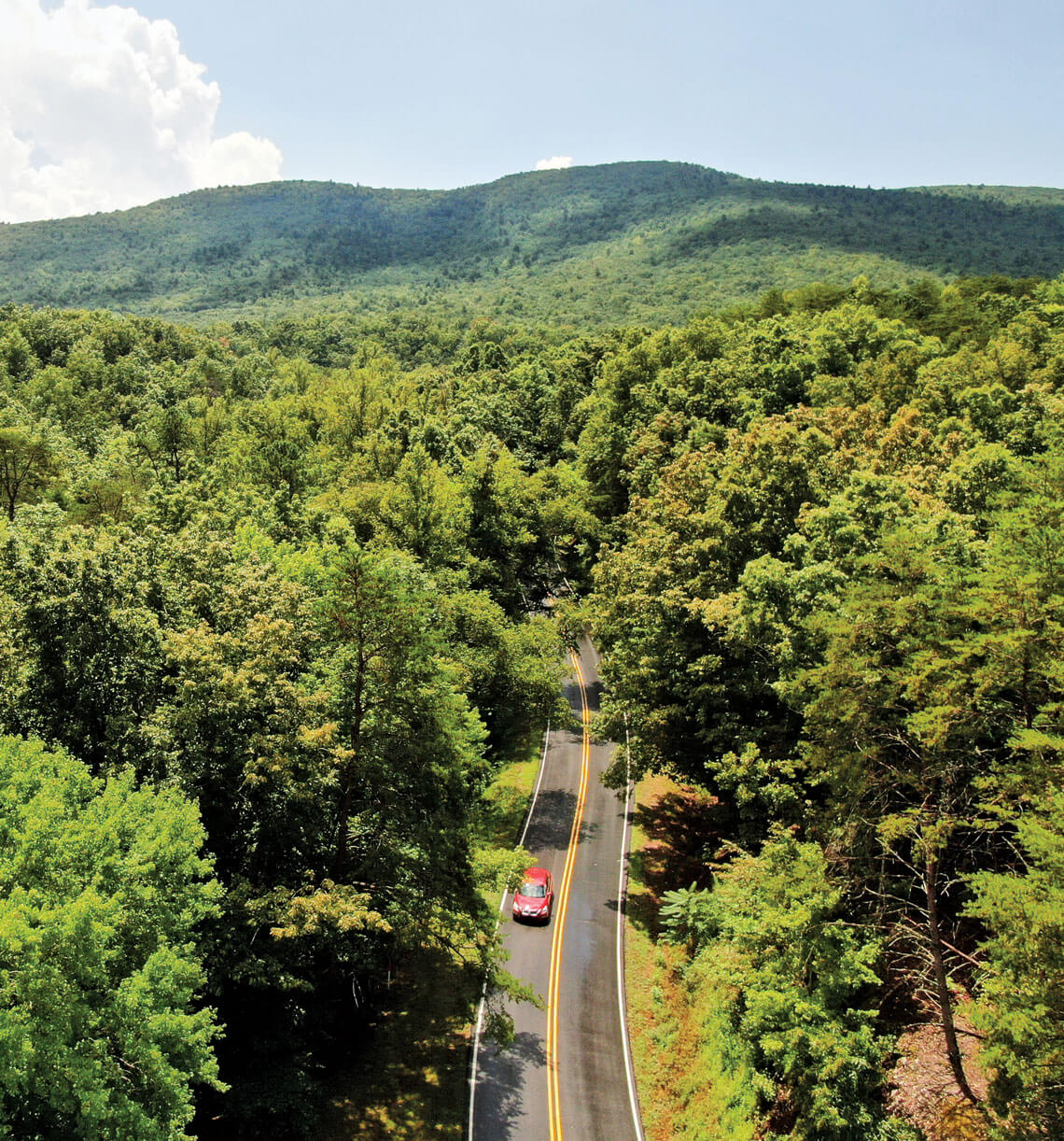 At the park’s visitors center, rangers direct hikers to trails like the Moore’s Wall Loop Trail — part of the Mountains-to-Sea-Trail — and point out landmarks on the park’s 8,000 acres from the center’s observation deck. From here, the view is of green forest carpeting vales and hillsides, with smooth rock cliffs breaking through in spots, suspended from the ridgeline — lending credence to the name Hanging Rock. In the distance, an old fire tower and observation deck up on Moore’s Knob mark the highest point in the park — and at 2,580 feet, it’s higher than the elevation of Asheville, a point of pride for rangers.

Hiking isn’t the only reason to come to Stokes County, of course.

The Arts Council occupies a half block of refurbished downtown Danbury storefronts that add up to a three-story multiuse space with sunny windows, tall walls for displaying art, and wooden floors that creak just enough to remind visitors that old buildings can have new purpose. A few steps inside the front door, there’s a coffee bar and ice cream shop called Rocky’s — named for Hanging Rock. A performance stage runs along the back wall. And you never know who might be calling a dance or playing a gig here: Eddy’s also a musician who sings, plays guitar, and writes songs, so he’s in the know about local acts to bring to the stage, and a few nationally known performers as well. The rest of the main floor holds an art market that sells works from more than 100 local and regional artists.

The community of Walnut Cove, a short, scenic drive from Danbury, draws collectors and browsers with a cluster of antiques stores and knickknack shops on Main Street. The largest, Just Plain Country Store, is a warren of displays and nooks filled with collectibles from 156 vendors — vintage dishes; jewelry like your mama and aunts used to pin on their Sunday coats; tools that are old, but still good as new. “If Granny had it, we’ve got it,” owner Kathy Dix says. She’s probably right: Wares spill out onto the sidewalk and around back, too.

Whether you’re hiking, shopping, or just taking in the scenery, a fitting (and filling) last stop on a big day in Stokes County is supper at the Hillbilly Hideaway in Walnut Cove. Rosanna Bray Jarvis is now the heart and soul of the business opened by her parents, Sam and Louise, in 1978. Rosanna is ever ready to share a story and a good guffaw as she moves through the dining room to check on everything and everyone. “We like you to feel like you’re eating at your grandma’s house,” Rosanna says.

Since 1978, the Hillbilly Hideaway in Walnut Cove has been known for its eclectic decor, family-style meals, and its post-dinner concerts. photograph by Joey Seawell

Service is family-style, with servers pushing rolling carts laden with three meats, six vegetable side dishes, and homemade bread. The Hideaway is famous for its hoecakes, made from Rosanna’s grandmother’s recipe for nestling biscuit scraps into a black iron skillet to bake, giving the bread a notably crisp and browned bottom crust. Hideaway bakers still make it by hand, and the hoecakes are so popular that Rosanna claims, “People will elbow you over it.” Each night’s menu is fixed, so the only decisions guests have to make are what to drink and whether to save room for dessert. Regulars know the lineup by heart, and newcomers can look up the particulars in advance online.

Every inch of the restaurant is decorated with what Rosanna calls her “theme walls,” such as Wild West and Coca-Cola. Any bare wall space is covered in customers’ signatures, a tradition that began on day one. The story goes that the Hideaway’s very first customer — who was the only customer for breakfast that day — asked if he could sign the wall for posterity. Rosanna’s mother said that he could, but only if he carried a big bag of biscuits back to share with coworkers at his construction site. That was enough to lure about 40 lunch customers, and Rosanna says the restaurant hasn’t had a slow day since.

On Saturday nights, Hillbilly Hideaway hosts post-dinner live music in its Music Hall next door, where seats from old Thomas Built school buses are lined up in rows for the audience. The house band includes some of the musicians that played with Rosanna’s dad back in the day. It’s a three-hour show of gospel, traditional country, and bluegrass music. “Just like Mama and Daddy did when this was their home, we’ll feed you good and sing our heart out for you,” Rosanna says.

When the house lights come up, it’s time to head home, letting your headlights lead the way after a fulfilling road trip to Stokes County. 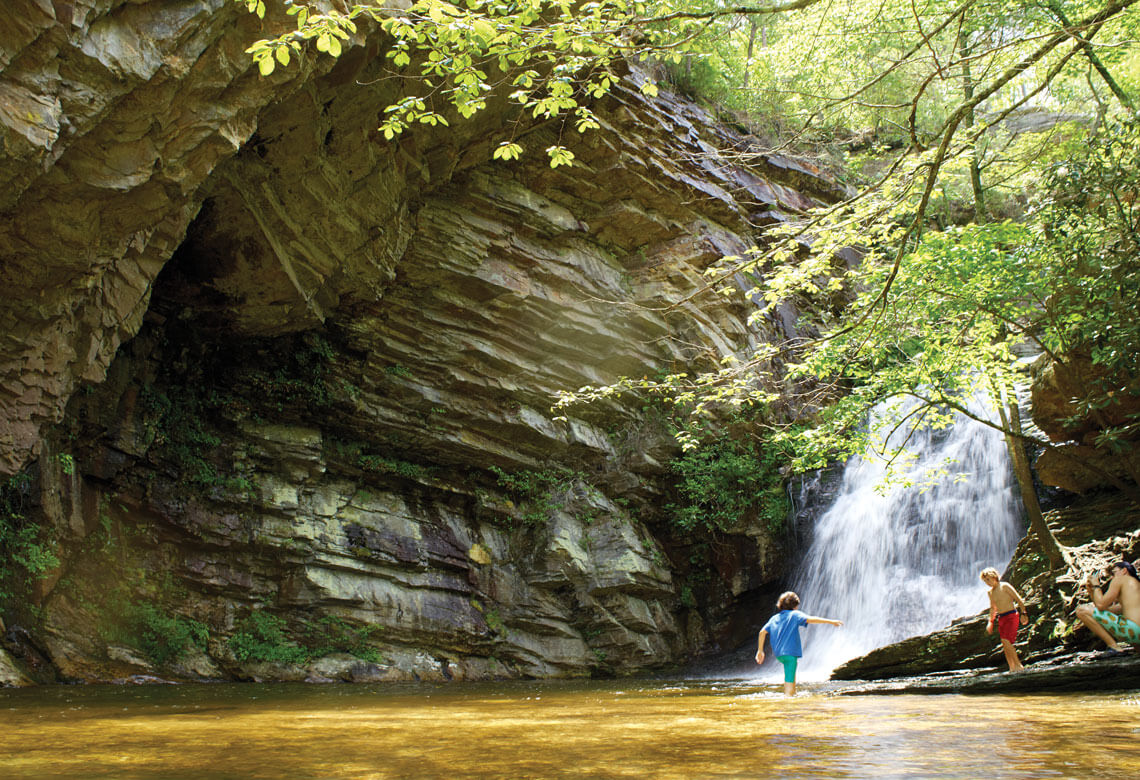 Less than half a mile from its trailhead on Hall Road, the Lower Cascade Falls Trail leads hikers to the edge of a gorge, where waterfall fans can climb down a set of steep stairs to the base of the 35-foot-tall Cascade Creek falls. photograph by Joey Seawell