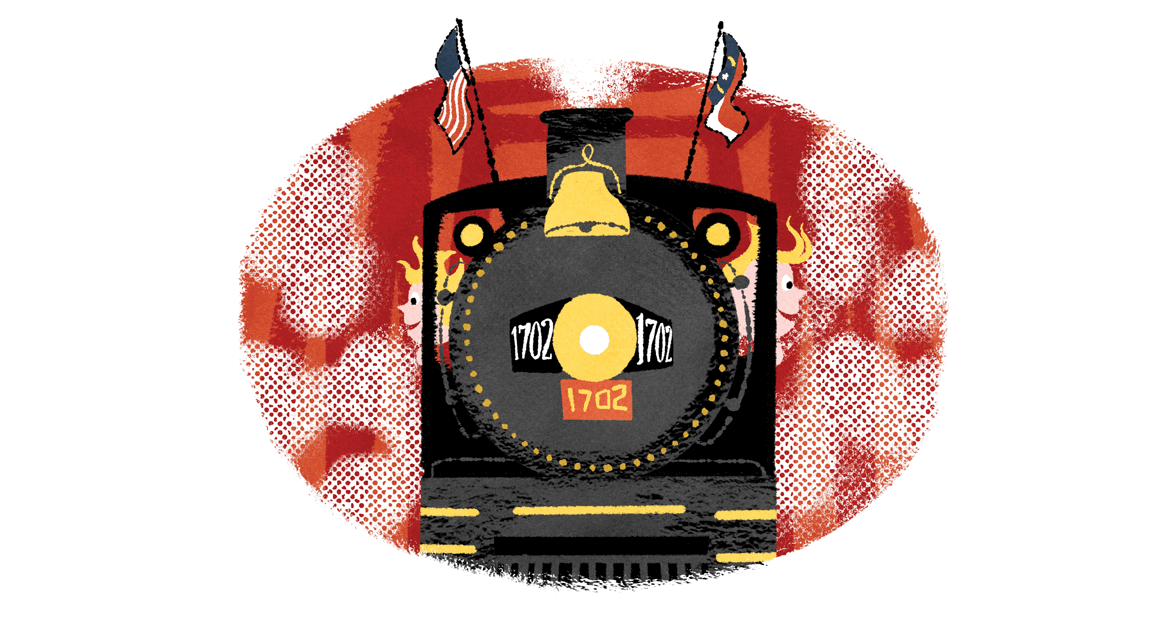 We’re not even on the train yet, and the questions are piling up fast: How much does a train weigh? Will it derail? Can it squash a penny? How fast does it go? Will we go over bridges and through tunnels?

We live within earshot of train whistles at home, and the Amtrak barrels right through Elon, where I teach, but the boys and I have never been on a real train. The Great Smoky Mountains Railroad is about as real as it gets: We’re about to ride behind a 1941 Baldwin steam locomotive, a gleaming jet-black beast of a machine that makes my small boys seem even smaller.

There is much excitement to go along with all of this trepidation. The Toad, my older son, leads the way onto a windows-open passenger car, and we find a leatherette booth surrounding a wooden table and try to settle in. The Wee, my first grader, peppers me with more questions: Have we started going yet? No, I tell him, not yet. But then the whistle sounds, and the train lurches, and both boys look at me, wide-eyed. Well, I say as we pull slowly out of the station.

A specific sort of awe settles over them once we’re underway, the train rocking and rattling beneath us, and soon enough, they’re both yawning and quiet and all but hypnotized — though I want to be careful to say: not sleepy, not yet. We’re just transported to a simpler version of ourselves, one where modern technology has been stripped away, one where we can roll slowly through mountain laurel and ferns and hardwood forest and past the Tuckasegee River tumbling along in the valley below. All we need to do is look out the windows and watch the world slide by.

The conductors, strolling through the cars, warn us: These tracks were carved out of the mountains in the 1880s by hand, and so sometimes the mountainside or a trestle bridge might be close enough to reach out and touch — which we certainly should not do. Nonetheless, every time that steam whistle sounds, my boys put their faces right up against danger, just barely still inside the car, to better hear it, the wind in their hair like they’re puppies.

The trip is Bryson City to Dillsboro and back again, and I’d be lying if I didn’t mention that a highlight is the layover at a Dillsboro brewery wherein libation can be had (if you’re me) and a glorious vintage Ms. Pac-Man machine might be played (if you’re, say, 9 and 6). I should also paint a picture of The Wee wandering the quaint streets of downtown Dillsboro, eating house-made fudge from a local chocolatier. But mainly, I need to show you that same Wee, back in the train car, sighing, looking concerned, finishing his fudge. “What’s the matter, sweetheart?” I ask him.

Start again it does. The Toad is the more cautious of the two, settling in to read, but The Wee’s favorite part is running errands between train cars, going back to the food car to refill his drink, to get napkins, to walk — surf? — those undulating floors. He does this so much, and the breeze is so narcotizing, that by the end of the ride, he’s facedown in our booth, dead asleep. We’re riding in relatively warm weather, but it’s not hard to imagine the different sort of magic that would attend the Polar Express ride, which runs in November and December along these same tracks.

In both directions (of course), we do, in fact, go through a tunnel, and the world goes ink-dark, and the smell of the steam permeates the cabin, settles in our bones. The huge wheels clack and roll, a sound and sensation we’ll feel even that night in our hotel, when The Wee will want to know if I remember the train, if we can ride again sometime soon. As we fall asleep in those crisp white sheets, one child on each side of me, I’ll remember the whistle — a sound some folks like to say is mournful, but one I’ll never hear that way again. I’ll hear it forever as the sound of these two boys trying to take all this in, as fully and absolutely as they possibly can.