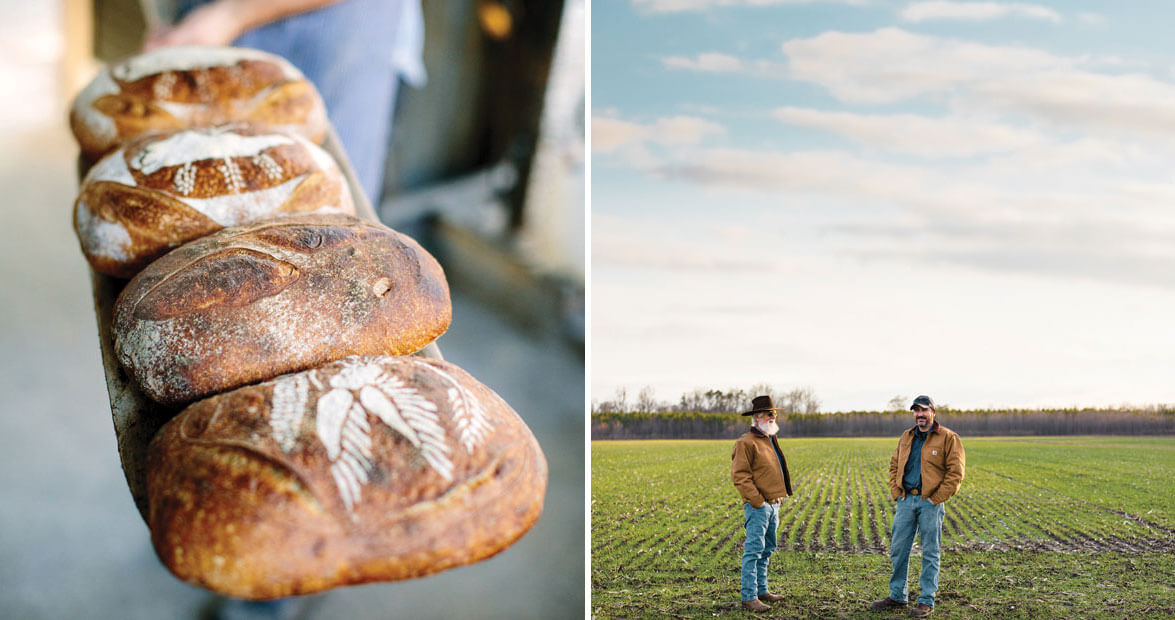 Chicken Bridge Bakery sits a stone’s throw from a rural crossroads in Chatham County that didn’t need a stop sign until a couple of years ago, when more folks started scooting out that way. Houses are spaced far enough apart to be private, yet close enough to be neighborly. In the reluctant light of a crisp early morning, smoke rises out of a few chimneys, but the output of one chimney seems more industrious than the others, suggesting that something interesting and unexpected might be found at the end of the driveway. And there is: Beneath a small blue house is a basement that serves as a professional bakery. Outside that basement sits a flatbed trailer. Atop that trailer is the bakery’s wood-fired oven, which could pass for both antique and invention.

After working in a handful of bakeries for several years, Rob and Monica Segovia-Welsh, owners of Chicken Bridge Bakery, decided to build their own wood-fired oven in 2007 and start making traditional hearth-baked bread out of their home, using as many local flavors as possible. Baking is more than their occupation; it’s their lifestyle and life’s work. They live and work seamlessly with the bakery. Their young sons, Simon and Milo, are often around, occasionally helping and often sampling what’s cooling on the bread board.

Each time the bakers load the glowing oven with dough made with North Carolina flour, they know what to expect, and yet they can’t predict exactly how each batch of fragrant, crusty loaves will turn out. Naturally leavened handmade bread already has a finicky mind of its own, but an outdoor wood-fired oven introduces even more temperature and humidity variables to the baking process. An heirloom baker must become equal parts scientist, artist, historian, and visionary. 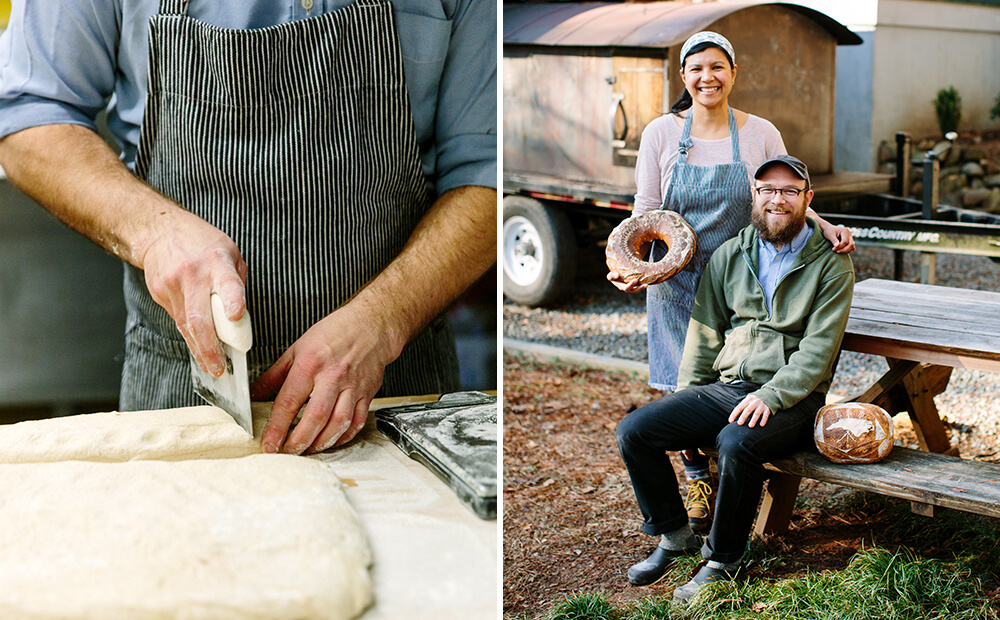 Monica and Rob Segovia-Welsh, owners of Chicken Bridge Bakery, specialize in hearth-baked bread made from North Carolina flour. Their bread-making involves cutting and leavening the dough. photograph by Anagram Photo

The farmers who grow these ancient seeds and the millers who grind the harvest for specialty flour must embrace all of this complexity, too. Despite the challenges, or perhaps because of them, heirloom grains are enjoying a renaissance in North Carolina. There’s a familiarity in these breads made from traditional grains and methods, even if we’ve never before eaten bread quite like this, as though some part of us innately appreciates a taste of home that bridges memory and discovery.

Local bread takes many hands to make and starts from the ground up, in fields like the ones tilled by father-and-son farmers Kenny and Ben Haines of Looking Back Farm in Tyner, a community in Perquimans County on the edge of Albemarle Sound. Here, the horizon runs in a straight line. The Haineses’ farm is around 300 acres, which is small compared to commercial grain operations. In 1987, the family switched to organic farming, a big step that, at the time, made them “the weird people down the road,” according to Kenny. “But now they think I’m only half nuts,” he adds with a wry smile.

Their first foray into heirloom grains was about 15 years ago, when renowned seed saver Glenn Roberts sent them a paper sack that held a handful of Sea Island White Flint corn. There was only enough seed for them to plant a few rows in a remote corner of their farm, where it couldn’t cross-pollinate with other corns. They hand-harvested the meager yield and ran the ears through an old-fashioned hand-cranked sheller to rub off enough kernels to plant the following year — but this time, there was enough for 10 acres.

The next year, Glenn sent another paper sack, this one filled with wheat seed, and over the years he’s sent other grains as well. The mix of what the Haineses raise changes from year to year depending on what’s needed and what’s happening with the land. The 2017 crops included four different wheat varieties: Red Fife, Red May, Appalachian White, and Rouge de Bordeaux. Some are repeats and others are new to them. Some are heirlooms and some are not. But each type is prized for its potential for superior flavor and suitability for local growing conditions. It makes Looking Back Farm, in their words, “an edible museum full of exceptional things that people really enjoy eating.” Plus, Ben adds, “some of this stuff is not just special — it’s beautiful, too. That Sea Island White corn has a color to it like pearls in a necklace.”

Kenny and Ben are particularly proud that their work is saving and restoring grain varieties that otherwise would be lost. When those grains are gone, so are their genetic attributes, which can never be replaced. Both father and son feel it’s the right thing to do. As Kenny puts it, “If you wait until something is gone to miss it, it’s too late.”

Bread is elemental, a magic amalgam of flour, water, and leavening — but mostly flour. “What struck me when I started baking in the early ’90s, when very, very few people were doing naturally leavened bread,” says Jennifer Lapidus, founder of Carolina Ground in Asheville, “was that most bakers were cut off completely from the source of their flour, their most important ingredient.” That epiphany led Jennifer to in-house milling for her own bakery, which led to opening a mill that supplied other like-minded bakers.

Jennifer’s gristmill hails from Austria. It’s smaller and more intimate than one might expect given all that it produces, yet it still feels larger than life. The outside of the mill is made of blond, sweet-smelling wood planed as smooth as the finest furniture. Its 48-inch millstones rotate quite slowly in an ancient process known as cold-stone milling. Jennifer devotes her mill to grains grown exclusively in the South, preferably North Carolina. She uses her business and her products as a way to bridge the gaps between farmers and bakers, and, in doing so, lay the groundwork for regional economies based on food-grade grain. And, of course, to help get excellent local bread onto store shelves and kitchen tables. 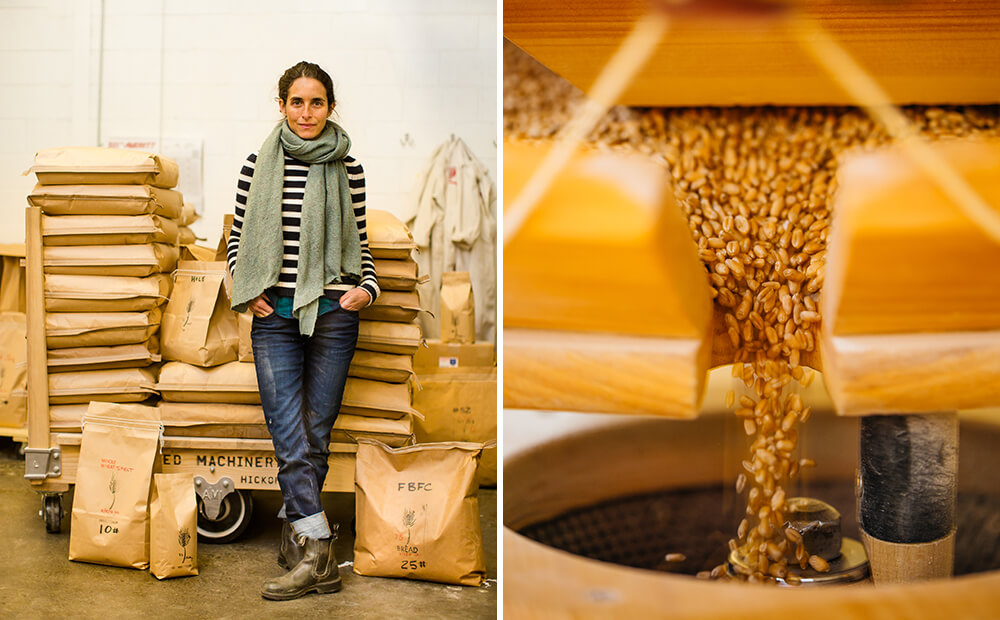 Jennifer Lapidus founded Carolina Ground to provide Southern grains to like-minded bakers. To that end, she uses a special gristmill that came from Austria. photograph by Tim Robison

Farmers want a good crop. Bakers want good flour. Eaters want good bread. For this system to work, there must be a good supply of grains for bread in the pipeline. As an expert baker and miller, Jennifer says that the high-protein hard winter wheat that works best in leavened bread isn’t typically grown in North Carolina. Our state, and the South as a whole, is better known for the soft wheat that makes great biscuits. Jennifer, along with other North Carolina bakers and millers, wants to support farmers who are willing to grow North Carolina bread wheat. This includes heirloom grains that were nearly extinct, as well as newer hybrids that have emerged from old-school breeding research and rigorous USDA field-testing conducted by Dr. David Marshall at NC State. Because these grains tolerate North Carolina’s heat and humidity, Jennifer calls them “game changers” for bakers who want to use locally produced flour.

“It’s a fortunate time to be a small, artisan baker in North Carolina,” Rob Segovia-Welsh says about his work at Chicken Bridge. “For the first time in generations, we’re able to source local, high-protein wheat grain. Some of us are lucky enough to be able to return to varieties that better connect farmers to millers to bakers to consumers — and that’s revelatory for us all.”

Local flour is exceptional, but it also has quirks and nuances that can vary with each batch. Rob says that learning to bake consistently great bread from somewhat inconsistent flour requires an ever-arching learning curve. Despite the couple’s years of professional baking experience, they’re still gathering knowledge, loaf by loaf. The bakery is full of scales, measuring cups, and charts that enable them to manage every variable possible, right up until they relinquish their work to the oven.

“I open the oven doors each time with curiosity and anticipation to see what happened in there when things were out of my hands,” Rob says. “Each loaf is a new lesson in how to apply new-timey knowledge to old-timey ways.” The old way is still the right way, and the proof is in the eating.