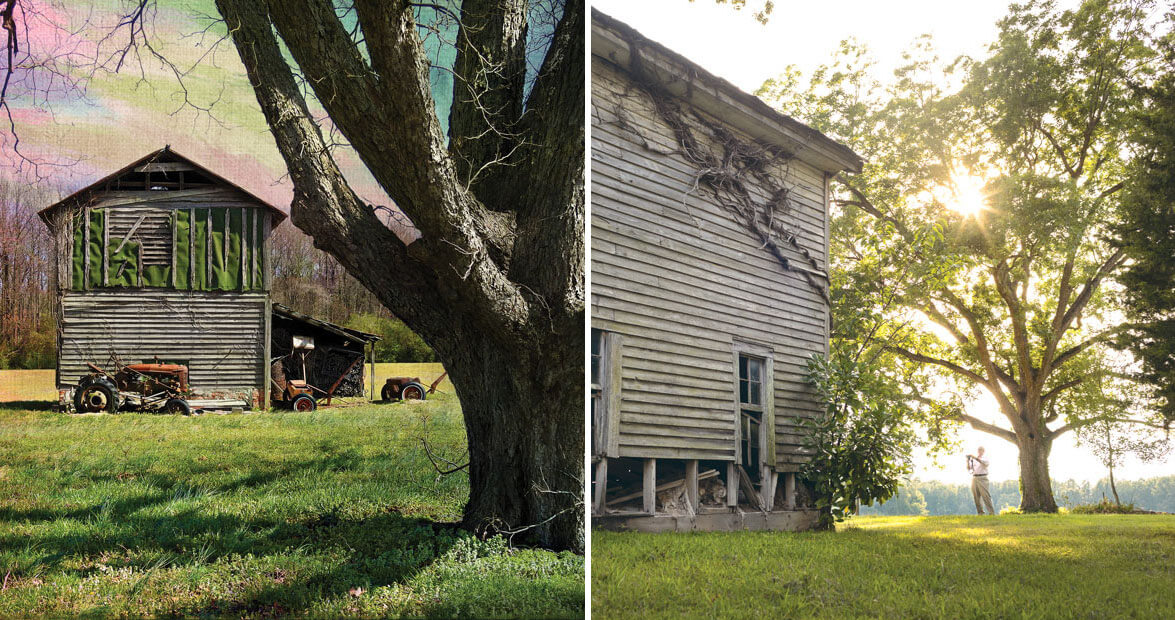 Watson Brown realized he was a little different when he was a kid, scrunched in the back seat on the way to the beach with his siblings, craning his neck to see the crumbling houses along the road. “My brother and sisters would be playing ‘counting cows,’ and I was just in my own world, looking at architecture,” Brown recalls. “I didn’t know what I was looking at, but I knew that I found it much more interesting and exciting than the stuff that they were doing.”

Several decades on, that fascination has endured, and Brown knows a great deal more about what he’s looking at. For 30 years, as a city planner in Tarboro and then in Raleigh, Brown worked to preserve old buildings (and to restore houses of his own). Now, in his retirement, he’s found a second career as an artist, taking photographs across eastern North Carolina that capture the state’s vanishing traditions, ways of life, and industries.

“Tobacco barns and some of the old things, they’re not going to be here much longer. They don’t have many uses,” Brown says. “Old houses — the big old houses, the ones that are falling down because people can’t heat and cool and maintain them — you might find a double-wide in front of one. A lot of times, I’ll pull in the driveway and ask if I can take a picture of the house. No one’s told me no yet. 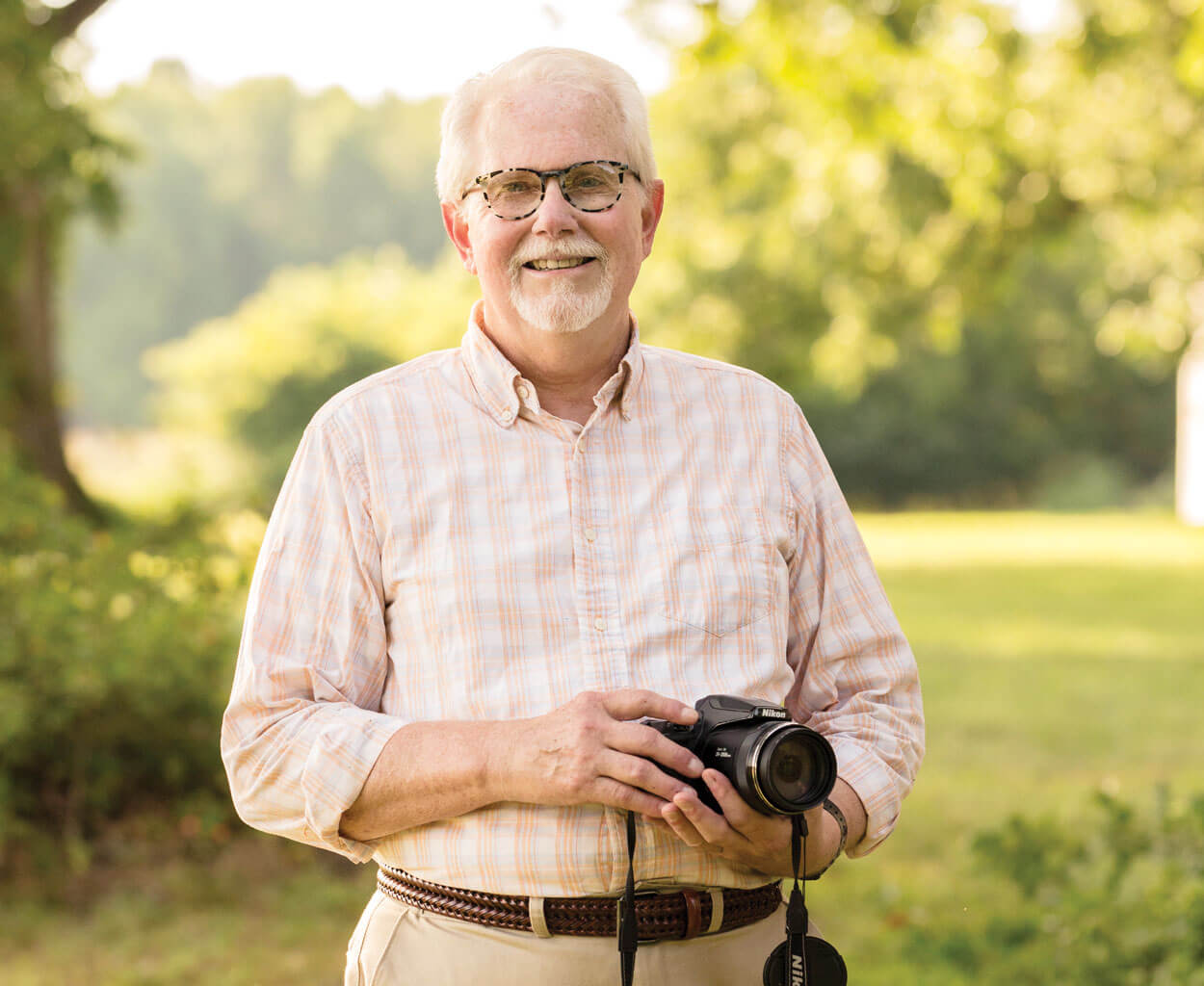 Brown is a study in contradictions: a man who devoted his life to city planning and now finds himself a bard of rural life; a preservationist who immerses himself in history, but creates vaguely psychedelic images from the photographs he takes. He’s always felt this tension between an appreciation of the past and a desire to make something new, and, in his art, he finds a way to reconcile it. He grew up on a family farm southwest of Tarboro, across the street from the property’s original 1854 farmhouse. After inheriting that farmhouse from an aunt, Brown retired as senior planner in Raleigh and headed back to the country. His house is decorated with century-old furniture, family photos, and tasteful bric-a-brac. A cat brushes past a bookshelf jammed with historical architecture tomes.

Many people have seen a collapsed tobacco barn and felt a pang.

Restoring the farmhouse kept him busy for a spell, but then Brown got bored. He noted that there was no book about his native Edgecombe County on his shelf, because no one had compiled one. Brown had often needed to take photographs for his planning work, though they were workaday shots. What he needed to do, he realized, was go around Edgecombe County and just photograph the historic houses that were left to create some kind of documented record. His simple catalog project gradually turned into something more: a full-blown pursuit, involving meandering treks down country roads, hours of editing ever-more-fanciful images, and a new career as an artist.

Brown half-jokes that he’s traveled down every road in eastern North Carolina. The old log-and-mortar tobacco barns that used to dot the state’s farms are a favorite subject. There are also dusty old grocery stores, fading but dignified churches, and rusting Fords under barn roofs. Many people have seen a collapsed tobacco barn by the side of the road and felt a pang — a curiosity about the lives of the farmers who once worked there, nostalgia for an old way of life, or a melancholic reminder of how time passes — but most of us drive on. Brown stops and shoots. 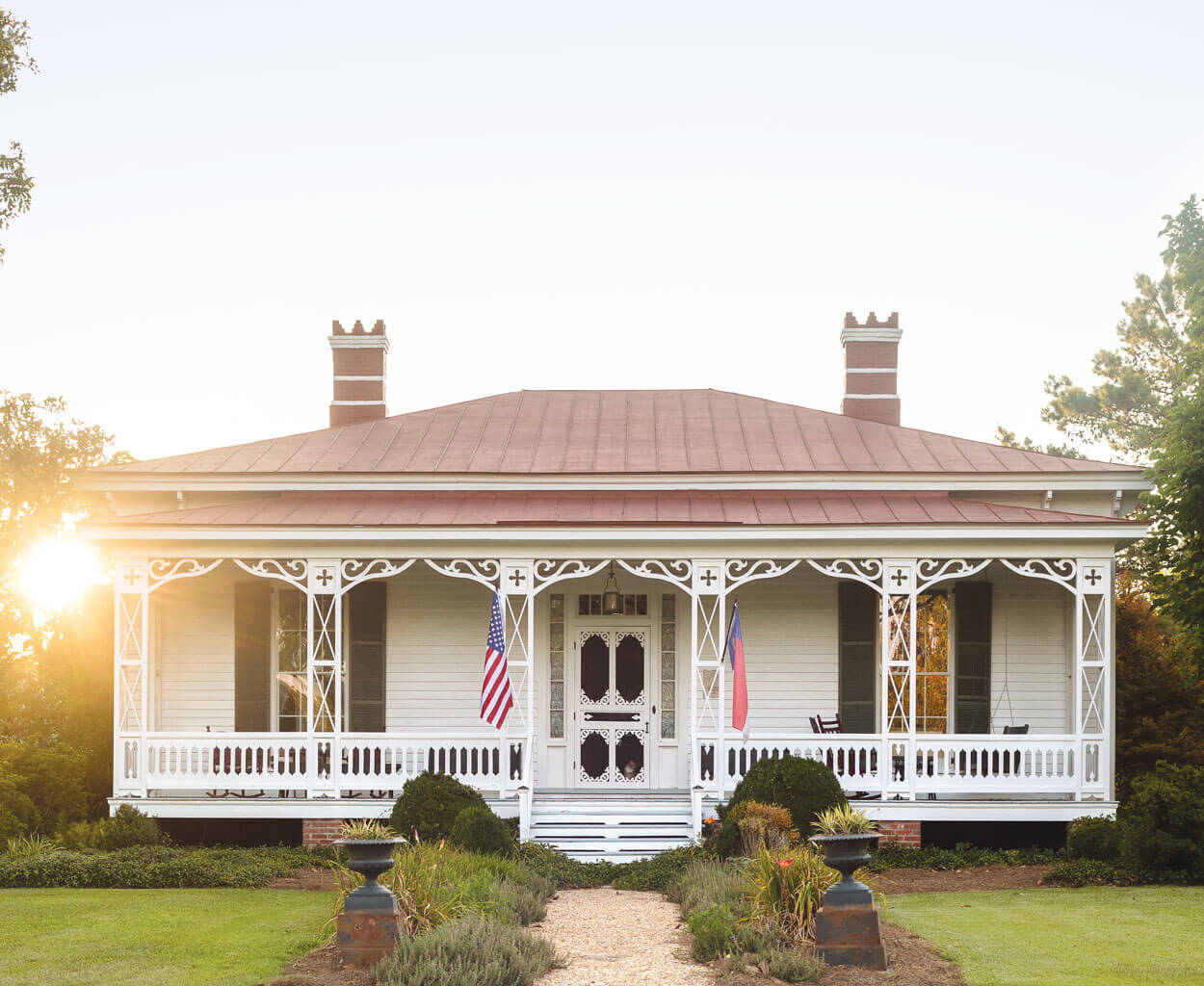 After retiring from his job in Raleigh, Brown moved home to the Garrett-Wiggins-Brown House, built in 1854. photograph by Alex Boerner

“I never know what I’ll find. That’s what’s so fun about it,” Brown says. “A lot of times, I drive by a place and end up turning around and coming back. I almost always regret it if I keep driving.”

Then he comes home and starts editing, often putting on music by bands like Jefferson Airplane for inspiration. Brown developed a style all his own by altering his photos with vivid colors and unusual textures. Sometimes, he won’t do much to a photo, but other times, he’ll warp the corners of buildings; skies take on unearthly hues. The result is a little bit Andrew Wyeth, a little bit Timothy Leary.

Not everyone likes the way Brown plays with his shots. “A lot of professional photographers will really push me about why I do this,” he says. “You know, ‘A professional photographer you’re not, because you do all this stuff.’” The criticism doesn’t bother him, though. The final images record not only a place, he says, but also a mood. His fans agree. Gallery C in Raleigh exhibits his work, and in 2014, Gov. Pat McCrory awarded him The Order of the Long Leaf Pine in recognition of his photos. 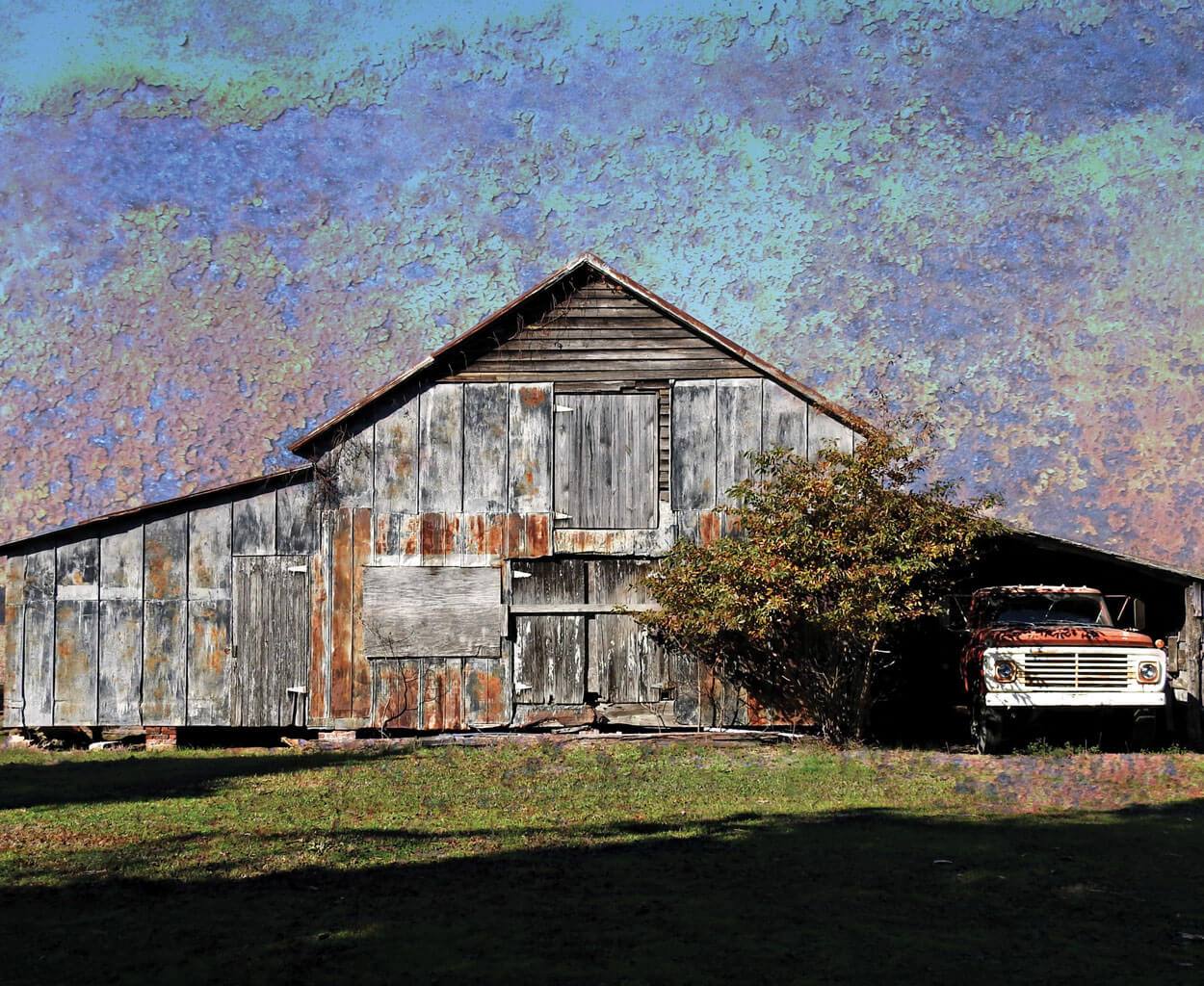 Brown’s altered photos are sometimes mistaken for paintings. “There are few great barns left around this part of the state,” he says of his favorite subjects. “There are no uses for them, so why spend money to replace roofs and boards?” But his vivid photos keep the memories alive. photograph by Watson Brown

One of Brown’s most meaningful subjects is not far from his house, on the old family farm: a two-story tobacco packhouse. It’s a simple wood-sided building, but it’s graceful and imposingly tall. While so many barns are abandoned, their builders lost to time, Brown knows some history on this one: It was erected around 1880, built by Tom Battle, an enslaved man on the plantation who became a well-known carpenter in the area. (Battle’s descendants sharecropped the land, and Brown grew up playing with them.)

Tobacco barns are mostly gone in this part of the state, and the packhouse will probably join them soon. Brown reckons one good storm could knock it down, and he can’t justify the expense of shoring it up. On the drive out of town, toward Raleigh, one semi-collapsed tobacco barn and then another peek out from the vegetation. In fields where trees have been cleared for new construction, previously hidden barns stand lopsided among the neat tract homes replacing them. There were once nearly half a million tobacco barns in North Carolina. Now, there are fewer than 10,000. “I thought I’d never see a day when they’re almost all gone,” Brown says. But his photos ensure they won’t be forgotten.