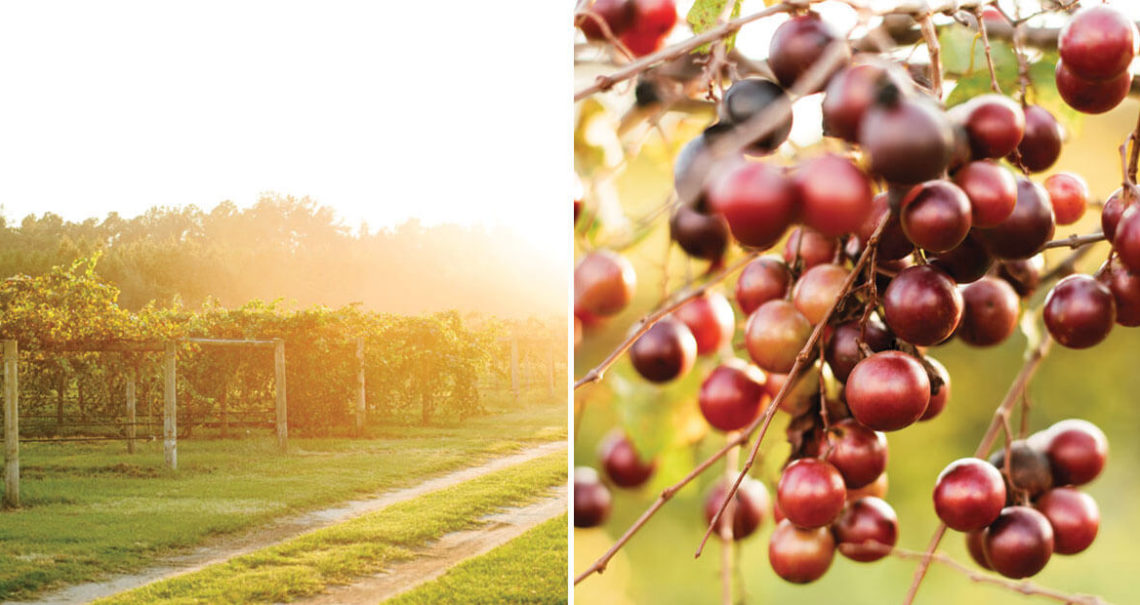 Five generations after his ancestors the Rev. Daniel White and Catherine Campbell White arrived from Scotland and settled along the Lumber River, Dan Smith grew up on the same land, helping his father raise row crops, cows, and hogs. Eventually, Dan left home; when he returned with his wife, Tina, 30 years later, the couple wanted to do something traditional but different. In 2002, they put in their first five acres of muscadines, and in 2005, they opened the winery. Since then, the Smiths and winemaker Nadia Hetzel have become some of the muscadine’s most passionate advocates. 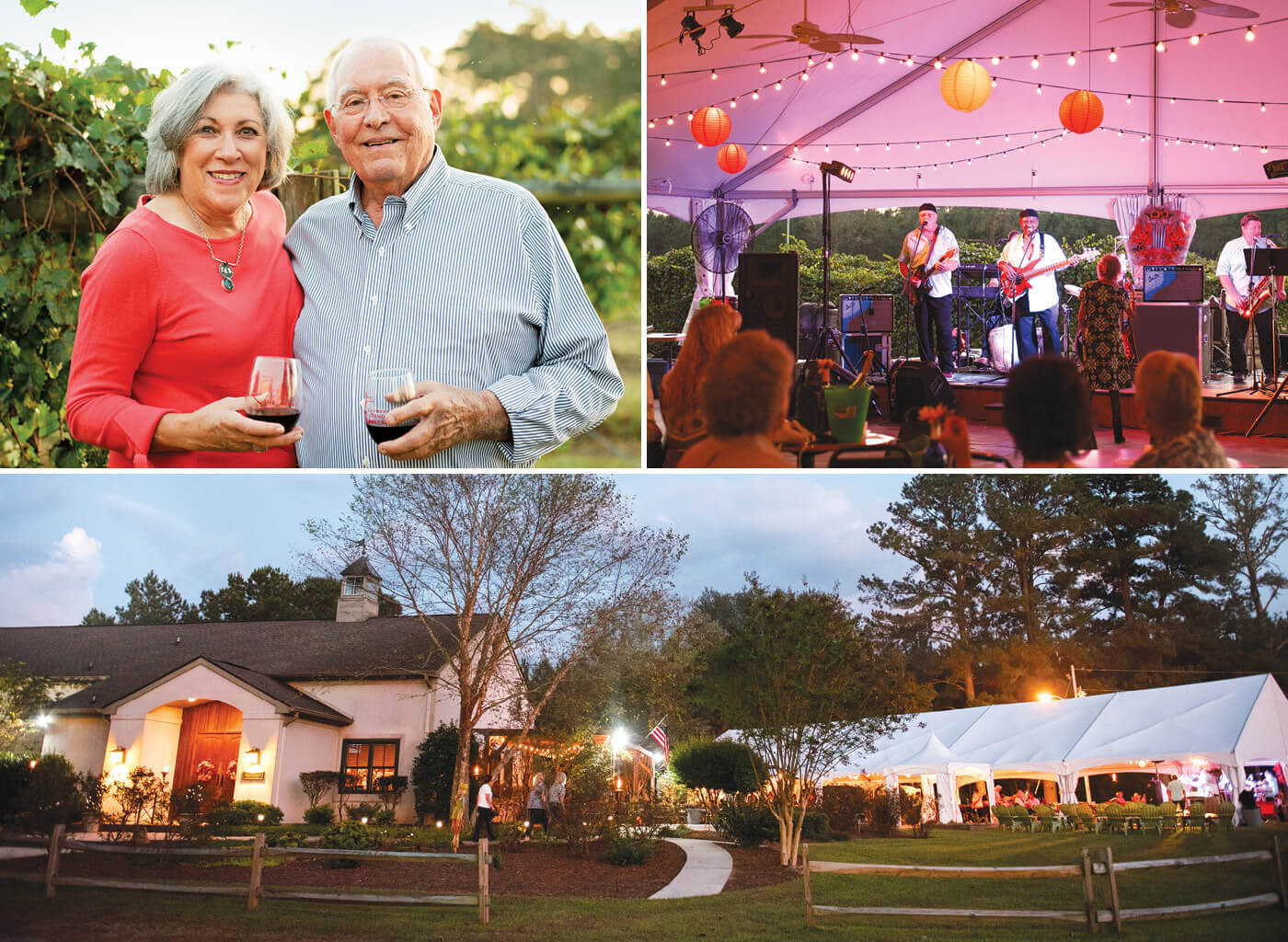 Tina and Dan Smith (above left) wanted to share the land that’s been in Dan’s family since 1807. So every weekend, rain or shine, they hold “Jazzy Friday,” pairing their wines with music from The Holiday Band (above right) and others. photographs by Faith Teasley

“Here you have this wonderful grape that no one knows about,” Tina says. “This grape is worth something; it needs to be shown in its true light.” That means making a spectrum of wines that range from sweet to dry, with several — like the award-winning Catherine — falling somewhere in the middle. “The three of us — Nadia, Tina, and I — are trying to explode the myth that muscadine wines have to be sweet,” Dan says. Most important, Nadia says, they like to see people enjoy what they’re drinking: “The best bottle of wine out there is the one you like.”

On Roanoke Island, the gnarled limbs of the Mother Vine ramble over half an acre, bearing a bronze variety of muscadine known as the scuppernong. Some say it’s the oldest grapevine in North Carolina, growing for more than 400 years; others believe it’s a descendant of even older vines in Tyrrell County.

We know that Native Americans and early settlers ate the grapes that grew wild around them, though only recently have we learned that what makes the muscadine so well-suited to the South — its thick skin, containing an abundance of antioxidants and resveratrol, naturally protects the grapes from UV rays and pests — also makes it especially good for eating and drinking. And there’s no doubt that the Mother Vine is the state’s most famous grapevine: In 2001, a group of students from Manteo Elementary School proposed that the scuppernong be named North Carolina’s state fruit. Several months later, the bill was signed into law, earning their local vine a place of honor. 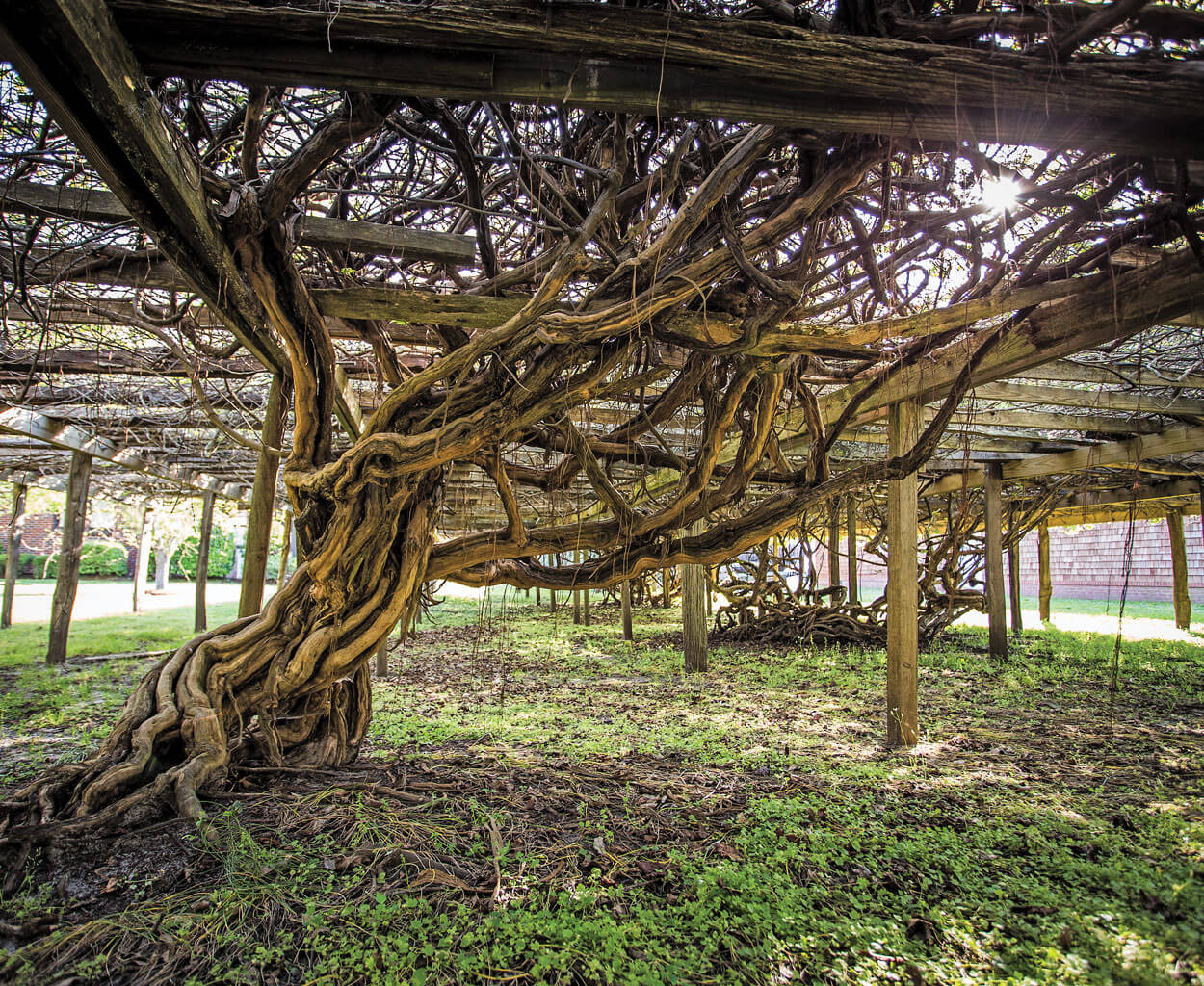 The Mother Vine is said to be the oldest grapevine in North Carolina. photograph by Chris Hannant

“I think there’s more wine in this building than in the entire state of North Carolina,” Dave Fussell Jr. jokes. He’s walking through the busy, 142,000-square-foot production facility of his family’s winery, where he guesses there might be 1.6 million gallons of Duplin wine waiting to be sold in 17 states. “It’s amazing to me,” Dave says, “because the first corker was a hand corker. We did everything by hand.” 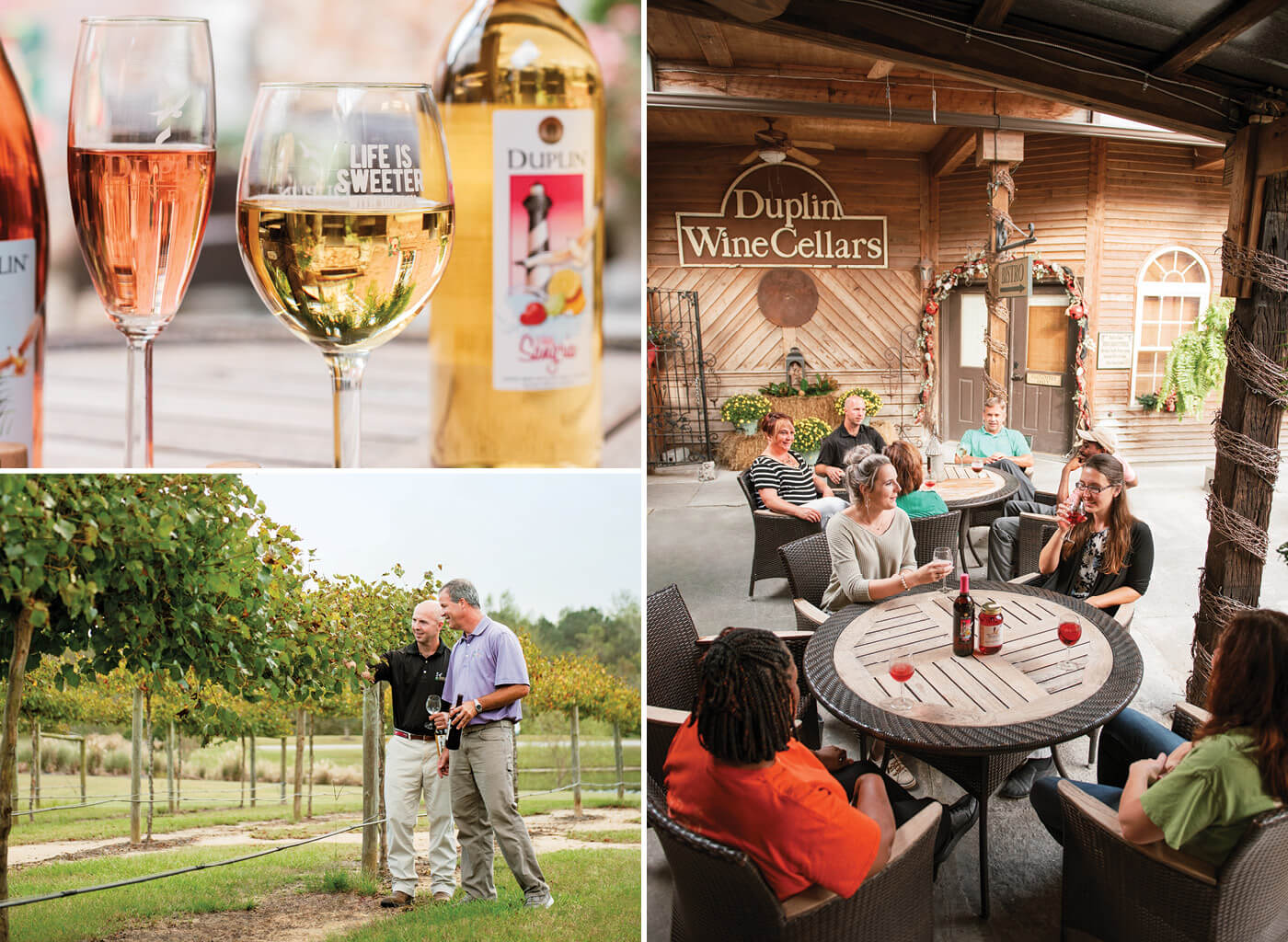 Brothers Jonathan (left) and Dave Fussell run the Rose Hill winery (opposite) that their father and his brother started in the 1970s. In 2015, the Fussells opened a new location in North Myrtle Beach, South Carolina. photographs by Faith Teasley

He can still remember the early years, in the 1970s and ’80s, shortly after his father, a schoolteacher, began growing muscadines, then started the winery, with Dave’s uncle and grandfather. The winery grew rapidly — today, if you don’t know the first thing about muscadines, you’ve definitely heard of Duplin, the oldest and largest winemaker in the South — and not without setbacks, some of them serious, but they’re always handled together, as a family.

Bob Hinnant opens the back door of his winery to reveal a sea of grapevines. The oldest ones, he points out, have trunks bigger than the posts they’re sitting on. “Some of them are almost 50 years old, and they are loaded,” he says, pulling back a curtain of leaves to reveal the heavy pods. His late father, Willard, a dentist, always had an interest in grapes, and he knew that North Carolina had a thriving wine industry prior to Prohibition. 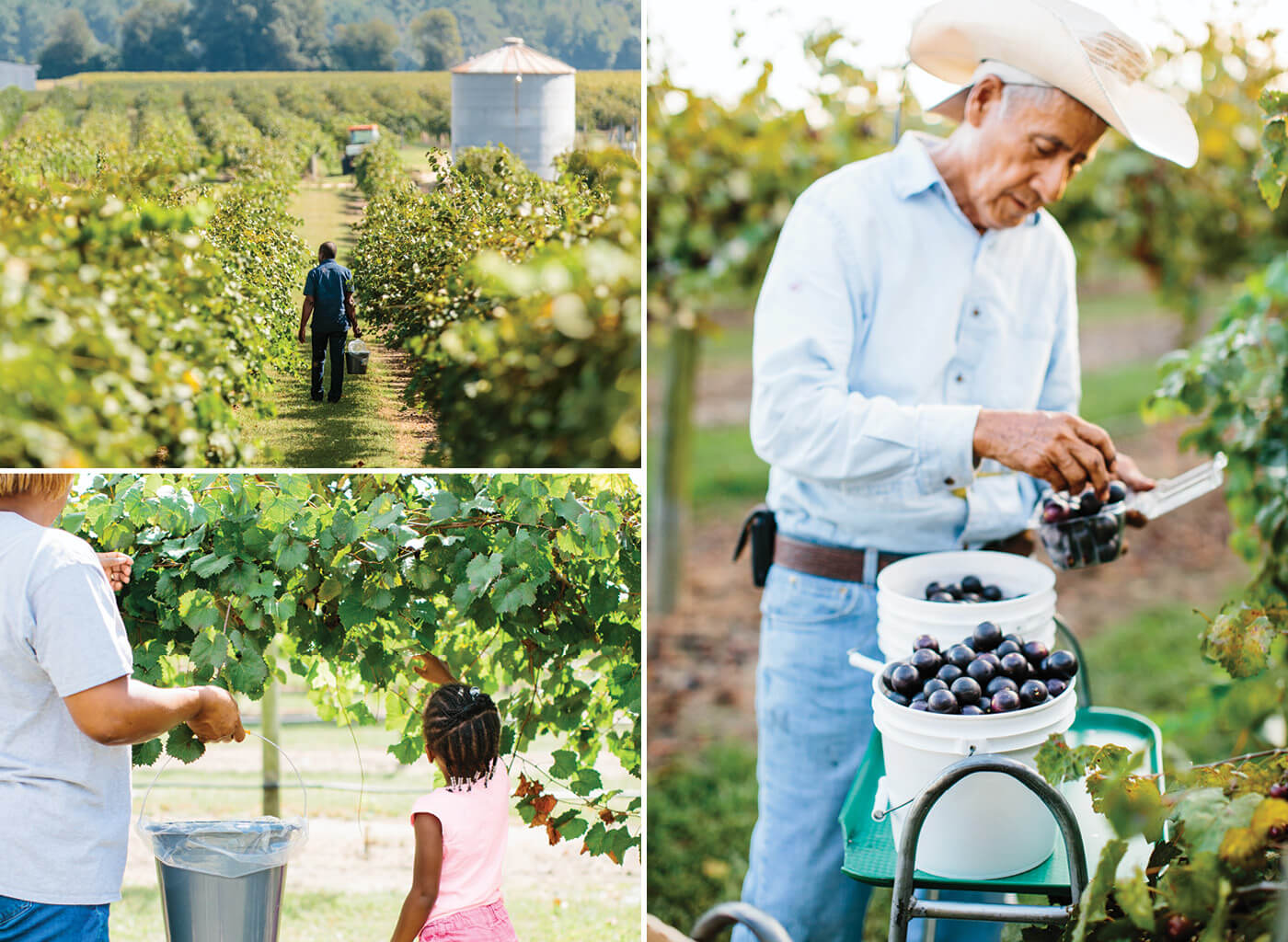 Early on, the Hinnants wondered if their Johnston County farm was too far off the beaten path for many visitors. But every weekend in late August and September brings hundreds of visitors for “You Pick, We Pick” days. “It seems like it grows every year,” Bob Hinnant says. photographs by Anagram Photo

After inheriting the family land, Willard and his siblings planted their first 16 acres of grapes in 1971. Bob, who was just 5 at the time, grew up with the vines. “My dad made me go out there with the field hands and learn it from the ground up,” he says. “I’ve done it all.” Father and son opened the winery in 2001, and while business is thriving, Bob is also eager to share the health benefits of fresh-picked muscadines — which are, for many North Carolinians, still a well-kept secret.

Ron Taylor’s parents, Lucille and Miller, passed away long before Ron transformed their family farm into a winery, but they remain a strong presence — from the name, Lu Mil, to the stories that Ron shares with visitors. The tasting room, for example, stands where Lucille’s vegetable garden used to be. “This building was built around those four grapevines,” he says, pointing to a leafy pergola covered in vines that belonged to his mother. 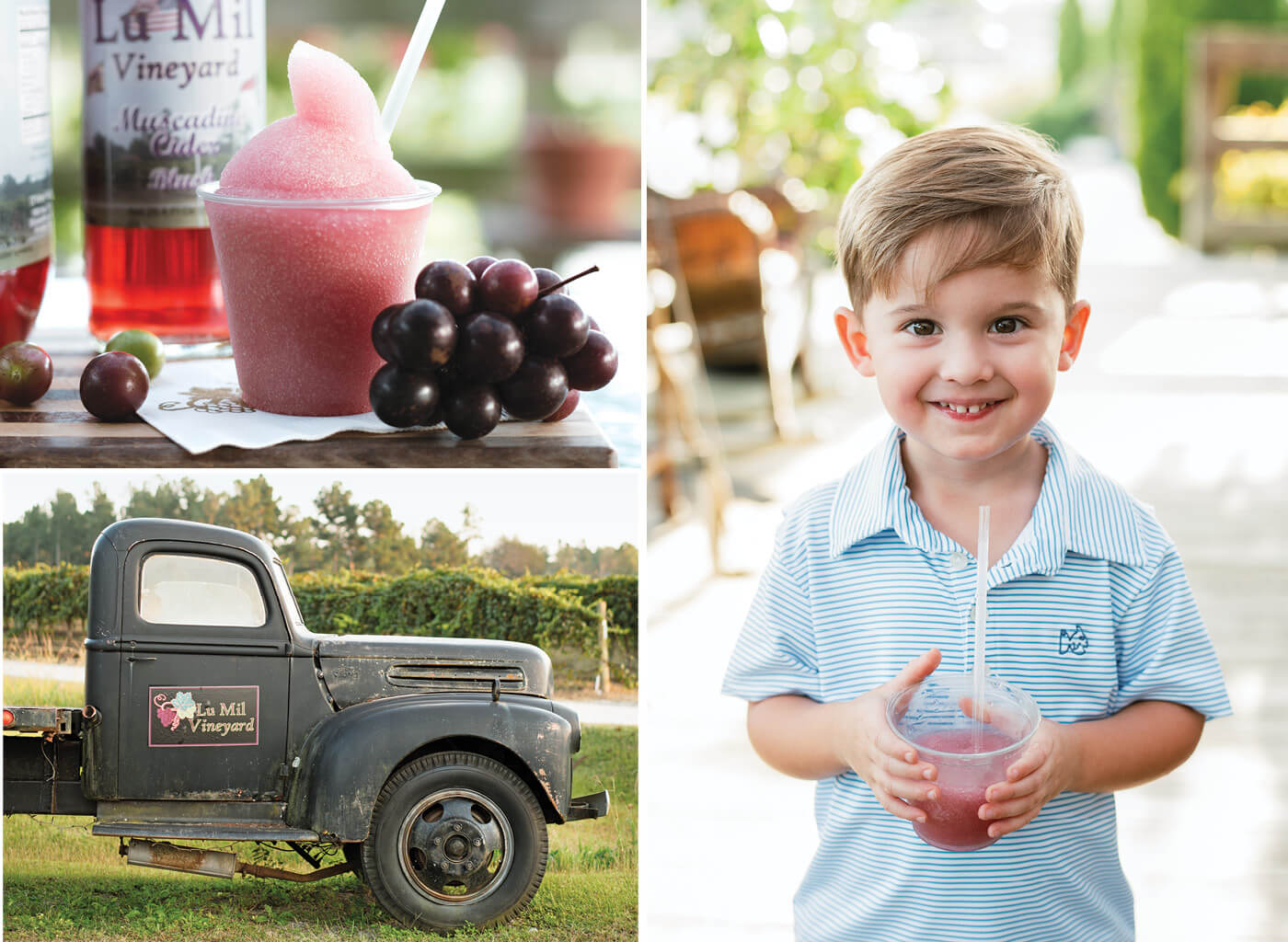 Holden Hood (top right) is not the only one who loves Lu Mil’s muscadine cider slushy. Owner Ron Taylor says it’s their No. 1 seller. photographs by Faith Teasley

When Ron was growing up, the farm was kept under lock and key because Miller was developing proprietary equipment for harvesting tobacco and cotton. Now, it’s a different story: Ron’s opened it up, refashioning the land into a beautiful backdrop for weddings and parties. In 2003, foreseeing the collapse of the tobacco industry, he planted grapes so that Taylor Manufacturing could transition to developing viticultural equipment. It was a natural fit for the land, too: Ron remembers muscadines growing wild in the woods around the farm. “When we were cropping tobacco,” he says, “we couldn’t wait to get to the end of the row to eat some grapes.