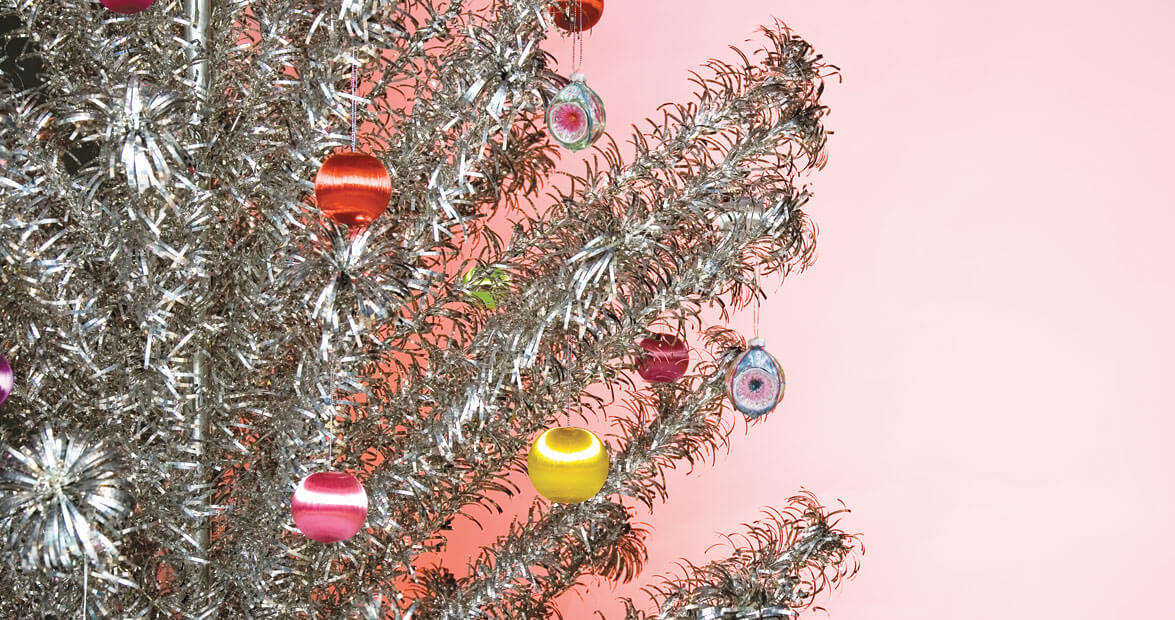 This whole thing is a little bit like a nesting doll, or a Venn diagram you never knew existed, so don’t worry too much about names and places and which is what. Concern yourself only with this: Inside the Thomas D. England House, which was built on Main Street in Brevard in the 1890s (but moved to the back of its lot in the 1980s, such that it is now almost on no street at all), the Transylvania Heritage Museum houses, each Christmas season, about 20 to 30 vintage aluminum Christmas trees. Some of those are decorated from the ATOM’s permanent ornament collection, and some have new decorations each year, sponsored by individuals and businesses. All of them, though, each and every one — I have stood inside the Aluminum Tree and Ornament Museum inside the Transylvania Heritage Museum inside the England House in Brevard, and I have borne witness — is spectacular.

That Venn diagram, by the way? Its circles would be named something like Nostalgia, The Moon Landing, and Santa Claus. The ATOM is the shaded area in the middle, where the circles overlap.

The ATOM’s full name, depending on your source, is The (World-Renowned) Aluminum Christmas Tree & Aesthetically Challenged Seasonal Ornament Museum and Research Center. I’m here outside of museum hours, so I’ve got the place to myself, which is good, because I need a lot of space to wander around slack-jawed.

These are Christmas trees, but don’t think red and green. Think silver, and shades of silver. Think pastel pinks and blues, and electric color wheels rotating beneath some of the trees. Think trees on tables and trees on the floor. There’s been an I Love Lucy tree in years past. An emoji tree. There is a “12 Days of Christmas” tree, a 4-H tree (“They do one every year,” Childress says), and a Transylvania Farmers Market tree celebrating local vendors (zucchini ornaments, okra ornaments). “It all takes a lot of hands,” says Childress, who runs the ATOM. “It takes days to assemble the trees.” 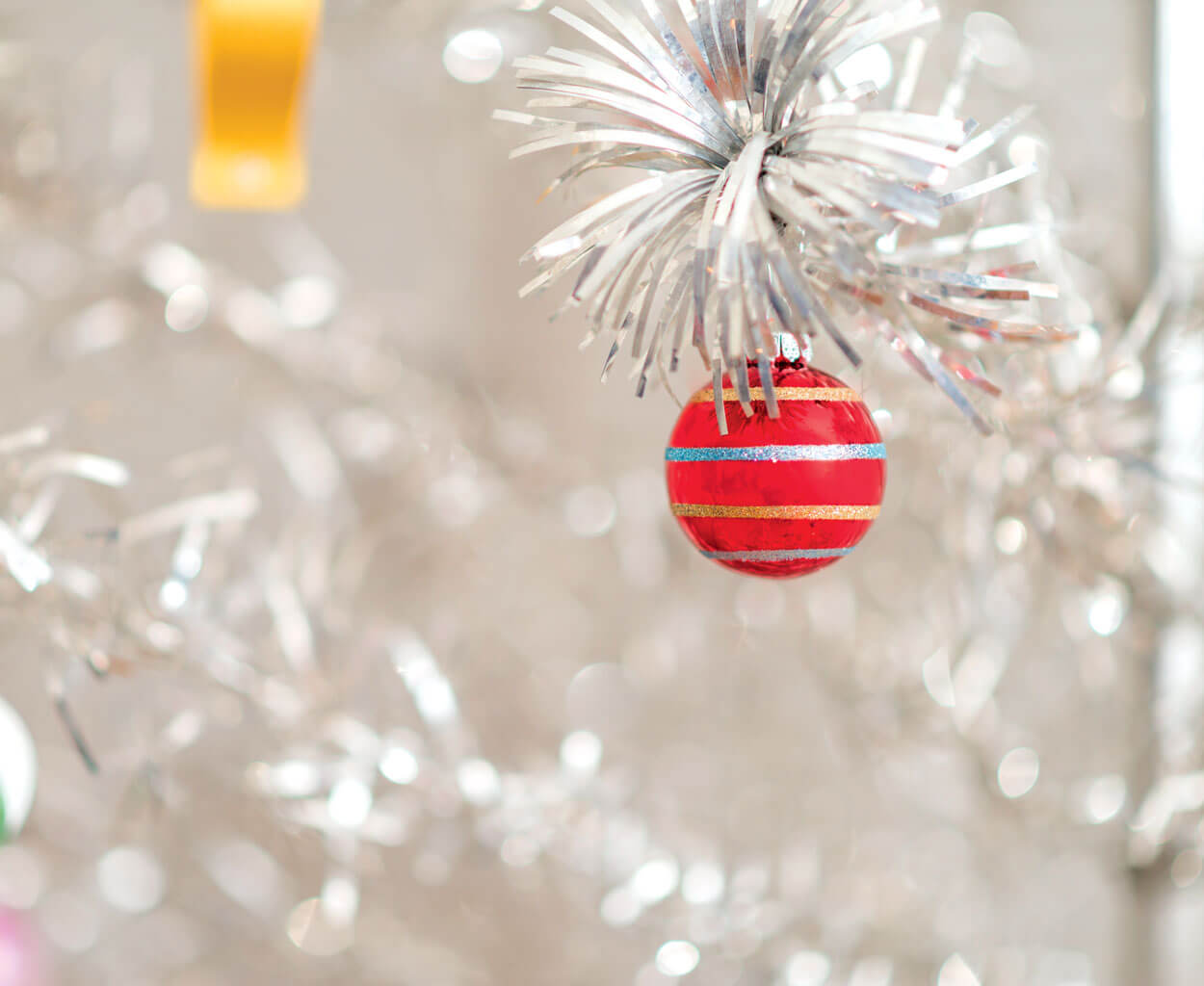 Aluminum Christmas trees hit their peak of popularity in the early 1960s. Millions were made, but few still exist. Those that do command much more than the original $25 price tag. photograph by HUEPHOTOGRAPHY/GETTY IMAGES

What sorts of rules are there about who can sponsor a tree? “Oh, anybody can,” she says. “You just need to make about 40 or 50 ornaments, and they need to be lightweight. We prefer that the themes be whimsical,” she tells me, and I ask her if she wouldn’t mind clarifying. “Well,” she says, “we don’t do manger scenes. That might be a little disrespectful.”

It’s all kinds of tacky and funny and wonderful at the same time, I tell her, circling back through the rooms of the house again. Childress agrees. “Whimsy brings joy,” she says.

Before my visit, I told a friend what I was up to. “I am very interested in this museum,” she told me via text, “and I am on the low end of the CHRISTMAS CHRISTMAS spectrum.” I am on the high end of that same spectrum, the sort of person who knows all the words to A Charlie Brown Christmas — and each year weeps through it. It may be that very TV special, in fact, that spelled doom for the aluminum tree: The coda of that story, if you remember (of course you do), has Charlie Brown’s real tree shining more brightly than any crass commercial one could. The special first aired in 1965, a date that coincides pretty neatly with a steep decline in aluminum tree production in the United States.

Don’t think of Linus knocking on the aluminum tree on that tree lot, though. Think instead of Pat Childress, trailing behind you, telling you the convoluted history of the museum. No matter where you fall on the CHRISTMAS CHRISTMAS spectrum, I assure you: You are very interested in this, too. You need to get yourself to Brevard.

Childress thinks — she’s cagey about the details, or maybe it’s that she prefers mystery to verifiable truth — that the Transylvania Heritage Museum has displayed the trees for nine years. “Stephen ran it for us one year,” she says. Or maybe it was two. Stephen is Stephen Jackson, who began his collection of aluminum trees in 1991 in Charlotte. Childress first saw the collection on display in 1999. “I thought it was just hilarious,” she says, and when the museum had a chance to acquire it, they did. Childress was the museum’s president for nine years. She retired in 2016, but continues to oversee the ATOM exhibit, on display in November and December. At the end of December, the museum closes down for the rest of the winter. “Hopefully [ATOM] makes us enough money to pay our rent until we open back up in the spring,” she says.

The light is long at the bottom of the year. The sunshine pouring in through the back windows illuminates a silver four-footer on a table. It’s a Steep Canyon Rangers tree, Childress’s favorite this year. “They’re from here,” she reminds me, and shows me an ornament with Steve Martin on it. That’s the comedian Steve Martin, who has played with the bluegrass band — a band that has 40 or so ornaments dedicated to it hanging on an aluminum Christmas tree in Brevard.

It is indeed hilarious inside the ATOM — Childress is unassailably right about that. But it’s also beautiful, and peaceful, and a reminder that Christmas doesn’t have to be all carols and firelight. It can be cookies and laughter, too, and it can take the form of 30 fake trees, holdovers from a bygone era.