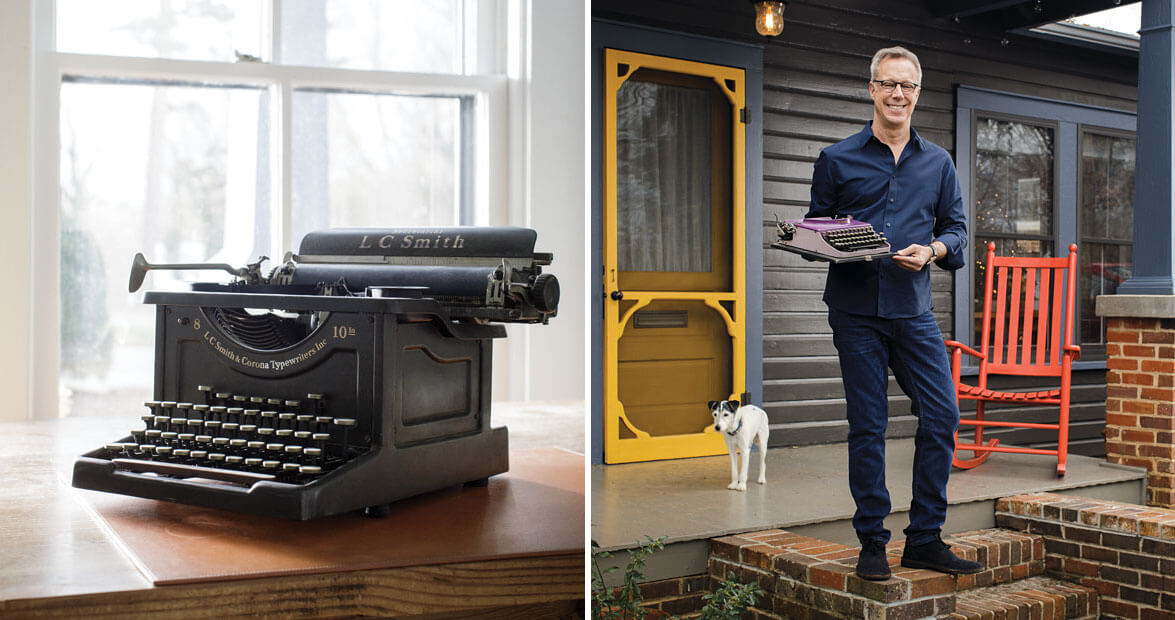 In Hillsborough, with the windows propped open, there’s a distinctive sound of spring: a faint tap tap tap of words hitting the page. The clickety-clack of Frances Mayes (Under the Tuscan Sun) or Lee Smith (Fair and Tender Ladies), the clatter of typing from Jill McCorkle (Life After Life) or David Payne (Barefoot to Avalon) carried on the wind. I imagine that I hear my neighbor, Allan Gurganus, on his Hermes portable, the typewriter on which he started Oldest Living Confederate Widow Tells All, the same model that J.D. Salinger used to write The Catcher in the Rye.

Since 2013, I’ve counted myself happily among this chorus. Who would have thought that I, growing up in Manhattan, would finally find my tribe in a town of 7,000? Not just writers, but typewriter people. We don’t all write on them, mind you. But we have them. We keep them. I have more than a dozen vintage typewriters lining bookshelves, tabletops, even my bedroom dresser. I’d be exaggerating if I said that I’d written stories on every one of them, but each has its own story. There’s a Blickensderfer No. 5 that looks more sculpture than writing machine, and which I once used for thank-you notes; my child-size Tom Thumb, now worn; and my favorite, a sleek purple-and-lavender Remington 3 portable that translated many of my early tales from thoughts to page. How I wish I still had my very first typewriter, a heavy, hulking Olympia SM given to me on my 13th birthday by my grandmother, who proudly told me it was “the Mercedes-Benz of typewriters.”

Grandma Marian, herself a typing teacher and librarian, taught me, weekend after weekend, how to type on that Olympia. My ninth-grade English teacher taught me to write. That’s as stark as the difference between technical and artistic scores in figure skating, but I needed both skills to find my voice. As a teenager, I found my very identity while striking those heavy metal keys (hard). Without that Olympia, I believe that I would have become lost to myself. On it, I typed out the secrets I kept from my family — and even from myself. 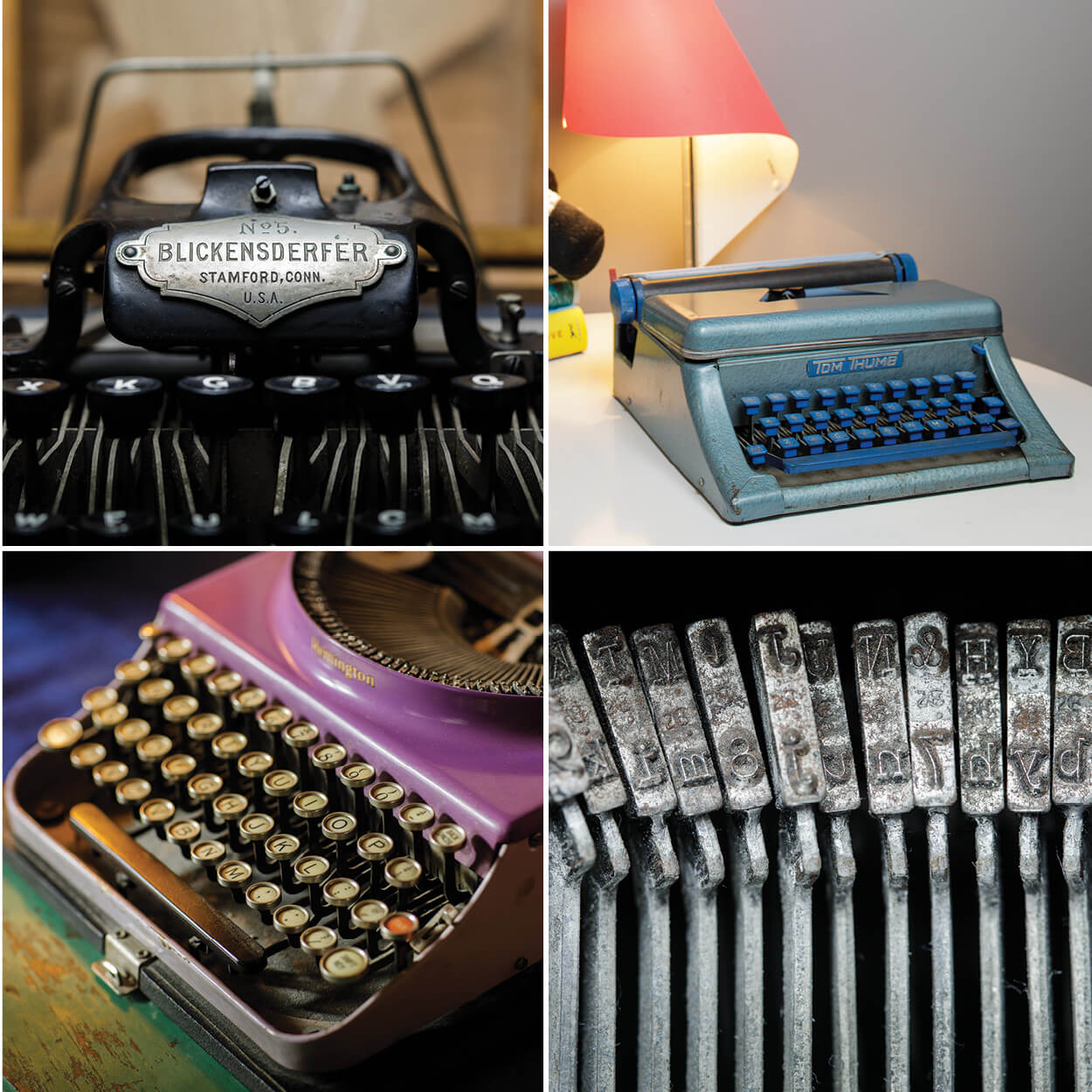 A collector’s favorites (clockwise from top left): a beloved “Blick 5,” as enthusiasts call them; a child’s Tom Thumb typewriter; the old keys to the kingdom of storytelling; a purple two-tone Remington Model 3. photographs by Alex Boerner

The writers in Hillsborough talk about their earliest typewriters like firstborn babies. As a little girl in Grundy, Virginia, Lee Smith pecked away on her first typing machine in a room above her father’s dime store. “I’d be looking through a one-way mirror at the people coming and going on the main floor below,” she says, “all of them stories in progress.” At the age of 8 or 9, she published a newspaper — The Small Review — that was actually bought and read by neighbors. “I can’t remember a time when I couldn’t type,” she confesses. And yet, Smith writes novels in longhand. “My fiction is very linked to the human voice, and I just can’t stand for anything mechanical to get between me and those voices in my head,” she says. The typing comes later.

These days, I tap out stories on a MacBook Air; it’s so much lighter and faster than my beloved Olympia. But on my desk sits the lavender-and-purple Remington 3, a reminder that while my machine of choice may have changed, the satisfaction of pounding the keys never goes away.

Without that Olympia, I believe that I would have become lost to myself.

McCorkle — who, as I type this, is typing away on her new novel, Hieroglyphics — still remembers her first: a brown two-tone Smith Corona electric, a birthday present from her parents the summer before her junior year of college. “I loved that typewriter,” she says, “and used it until the motor froze and died.” She started her first two novels on it, but soon upgraded to a fancier Smith Corona “that had a cartridge I could insert and then just retype a mistake, and voilà! It disappeared.” That feeling, that image, stayed with her into other books: “I have a character in a story from that era wishing she could do just that with her life.”

But a writer and her characters are quite different people, and the McCorkle I know is not one to disappear. Quite the opposite: She’s a show-up kind of girl. Four years into my life in Hillsborough, I crashed into a bad patch. Within 100 days, both of my parents died and my husband left me. One steaming July afternoon, feeling dejected and lonely, I was out walking my terrier, Zoe, when a Prius crept up from behind. McCorkle, at the wheel, suddenly popped out, grasped my hands, and pulled me in for a hug — a spontaneous act of kindness that I badly needed. And then she released me, silently driving off. No words required.

“I wanted to write magic,” Jaki Shelton Green, the state’s current poet laureate, told me in describing her first typewriter, an “authoritative,” greenish-gray Remington portable, a gift from her aunt Alice. Green actually lives 10 miles outside of town, in Mebane, but Hillsboroughians like to claim her as one of our own. Her oversize glasses and halo of curls are a common sight at literary events in town. Of course, the real litmus test is whether Sharon Wheeler, the owner of Purple Crow Books — our town’s literary hub — includes her on the “Local Authors” shelf. (She does.)

As a young writer, “sitting behind my antique story vessel,” as Green calls her Remington, she daydreamed about being Virginia Woolf, Sylvia Plath, Alice Walker, or Zora Neale Hurston. “The heavy black body, ink ribbons, and my ink-stained hands legitimized my love of creating new worlds inside of words.” By the late 1970s, when Green was in her 20s, she “developed a penchant for vintage typewriters,” and snagged two older Underwood Standards. Her first collection of poetry, Dead on Arrival, and her first play, Blue Opal, were composed on them. Magic, indeed. 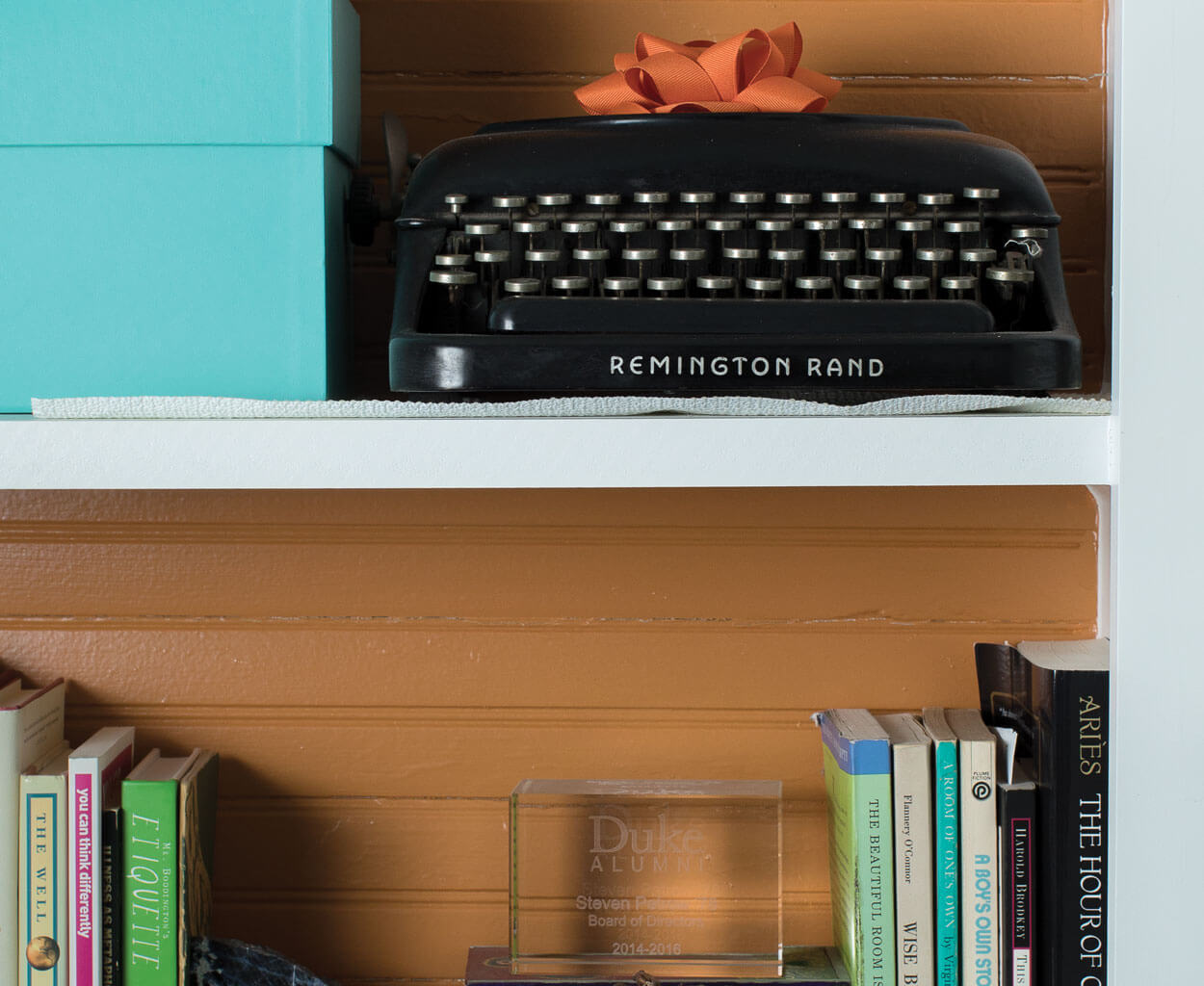 Most Remington Rand portable typewriters were made before 1939. Their Art Deco design makes them coveted collector’s items photograph by Alex Boerner

Which brings me back to Gurganus. In a way, he conjured this place. It was his pistachio green Hermes that recently starred in our town’s exhibit of typewriters at the historical museum. (My Blickensderfer No. 5 had a supporting role.) Ask just about anyone here how Hillsborough became America’s “little literary town,” and they’ll name Gurganus. Hal Crowther, a veteran journalist and author (and Lee Smith’s husband of 34 years), sums it up in his usual, blunt way: “I have no idea why so many writers have ended up in Hillsborough — except that Allan Gurganus was here first.”

Gurganus moved to Hillsborough in 1994 after a spell in Manhattan, which is all it takes sometimes. Four books and countless accolades later, his Hermes portable rests in a place of honor in his study. “No keyboard,” he says, “is ever more beloved than that first one.”

A typewriter person understands this without question. It’s a sentiment and a shared experience that predates our digital age: hitting those keys (hard) and discovering what we might, someday, have to say. Or where we might belong. Six years after moving here, I’m reminded of what Gurganus told me early in my Hillsborough life: “We spend our days typing and mostly uncork our wine after 5 p.m. It’s a civilization.” But as everyone in town knows, don’t call him before then. He’ll be at the keyboard, typing away.