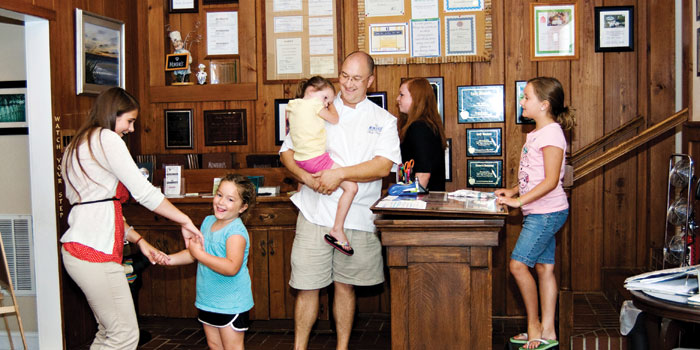 One morning a dozen years ago, the Muffin Man overestimated his daily delivery of fresh-baked breakfast treats to an Elizabeth City coffeehouse.

At first, he didn’t know what to do with all of those extra cream-cheese-flavored and chocolate-filled croissants, blueberry and banana-nut muffins, orange-cranberry and chocolate-chip confections.

The Muffin Man, whose real name is Andy Montero, figured he’d just drop them off at his insurance company. It was the only other business he knew in town.

All those baked goods impressed the workers there. “You should bring more tomorrow,” they told him. “We’ll buy them from you.”

Soon, Andy started baking seven hours a day and peddling his muffins at businesses all over town. He hauled his big baskets of baked goods through a hundred doors a week.

Andy grew up in Hampton Roads, Virginia, one of four boys who spent a lot of time in the kitchen. He got a job in high school at the busy Court House Cafe in Chesapeake, where the workers and the owners and the customers never changed. Andy wanted his own restaurant to be like that.

He headed to Johnson & Wales University in Norfolk, where he studied the food industry and met a pretty, young woman from Elizabeth City who would become his wife.

Karin Strickland sat behind Andy in a business-management class. She’d fallen in love with food as a child in her mother’s kitchen, where she made special desserts. Karin wanted to open her own restaurant someday, too.

Andy tried to win her favor for a year before they finally went out on a real date.

Karin had liked him all along. Andy wasn’t like other students. He looked and acted like a real chef, she says. He also wore real chef shoes — the kind with cushioned support and slip-resistant soles. Karin liked that.

Six months after their first date, Andy asked Karin to be his wife.

It’s a rainy Sunday morning. Brunch customers file in and out of the old house Andy and Karin purchased soon after they moved to Elizabeth City in 2000.

For five years, Andy sold basketfuls of baked goods, and he told eager customers about the restaurant he and Karin planned to open. By the time Montero’s served its first meal in November 2005, the whole town knew about it.

Montero’s has almost everything, from seafood (crab cakes, crab-stuffed flounder, shrimp and grits, and mahimahi); to Italian (chicken Parmesan, spaghetti, and penne pasta with fresh mozzarella and basil pesto); to chicken dishes, steaks, and barbecue ribs.

Every meal comes with a basket of minimuffins.

This morning’s special — pancakes with fresh, local fruit and whipped topping — includes a trio of plate-size flapjacks and two sides. All for less than $10.

Montero’s is casual enough to wear jeans and special enough to don a three-piece suit. If you’re celebrating a birthday or an anniversary, you’ll get a card signed by the staff and balloons or flowers at your table. If you come with a crying toddler, Andy and Karin and their employees won’t judge you. They’ll distract the child with toys while you wait for a table.

Andy and Karin are raising their own three daughters in the restaurant. The oldest, Emma, was only 2 when her parents opened Montero’s, and she toddled through the restaurant behind them. She earned her own name tag two years later and started taking on little jobs by herself.

“Who can complain when you send a 4-year-old to the table?” Andy says.

Emma, now 8, works at least one day a week. Being the hostess is her favorite job. She greets customers with poise and professionalism from a step stool behind the host stand.

For a long time, Emma left the phone duties to others. She was too worried she might make a mistake or forget something. But Andy practiced with her, and when Hurricane Irene left Montero’s short-staffed in August 2011, she learned quickly. Now Emma answers callers’ questions and asks the right ones when she takes reservations, down to the spelling of last names.

Andy and Karin’s middle daughter, 5-year-old Claire, works behind the scenes with her mother.

And their youngest, 4-year-old Anna, who just got her own Montero’s name tag, sits in her father’s lap, clutching a stuffed animal and clinging to Andy like a starfish.

When it’s time for the Muffin Man to get back to work, he asks Anna if she’d like to go find her mother. She shakes her head.

So he takes Anna by the hand and heads out into the dining room.

Kristin Davis is a freelance writer who grew up in Goldsboro. She now lives in Fredericksburg, Virginia, with her husband and three cats. Kristin’s most recent story for Our State was “The Hope of Fish Town” (May 2012).