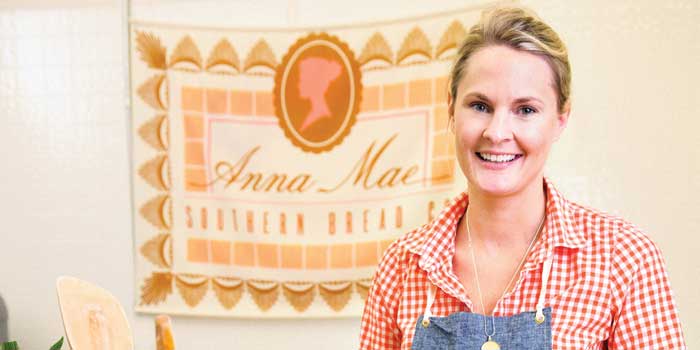 Love brought Shana Martin to Browns Summit from Nashville, Tennessee, to be with her college sweetheart. And love keeps her baking every day, using the same recipe for yeast rolls that her grandmother Anna Mae Hagewood once used.

“She was a classic, rural home cook,” Martin says of her grandmother, who lived in rural Tennessee and never learned to drive. After Hagewood’s husband died, she relied on friends and family for transportation. Baked goods were her way to give thanks for the help others provided.

Martin remembers being fascinated by her grandmother’s root cellar, packed with canned goods from her garden. But everyone in the community knew Hagewood best for her bread, a Southern version of sourdough with a hint of sweetness. People offered to pay Hagewood for her special rolls, but she refused compensation.

Hagewood died when Martin was 19, and for many years Martin was too busy to learn to cook. But when she moved to North Carolina with her husband, Scott, four years ago, she became homesick. Her mother encouraged her to seek comfort in baking and gave her Hagewood’s recipe for bread and a jar of her yeast starter.

Learning to bake her grandmother’s bread gave Martin confidence to go out and meet people in her new community. She took her first batches of bread to nearby Grove Winery. She made quick friends there, and the winery began buying her rolls to pair with wine tastings. Soon Martin would sell her dining-room furniture, get her home certified as a bakery, and begin running a business out of her 12-foot-by-12-foot dining room with the help of her husband.

Eventually the Martins decided it was time to move bakery operations out of their home, and they found a space at Revolution Mills, a renovated cotton mill in Greensboro. Their business continues to grow. The Fresh Market, Lowes Foods, Whole Foods, and Harris Teeter now carry their rolls.

Hagewood’s rolls take 30 hours to make from start to finish, but the time is worth it to Martin to be able to honor her grandmother every day.

“My grandmother was the catalyst to my happiness,” Martin says. “You can’t change where you’re from, so why not take the best of where you’ve been and apply it to the future?”

Although Shana Martin uses the same recipe that’s been in her family for years, she infuses her product with her personal style, marrying Nashville-inspired letterpress packaging with flavors from North Carolina. The Cheddar-and-chive roll is Martin’s invention, as is the sweet-potato-and-molasses roll, which was inspired by a sign outside Faucette Farms near her home. “The sign said ‘sweet potatoes for sale,’ ” Martin says, “but it might as well have said, ‘Welcome to North Carolina!’ ”

Katie Saintsing is the editorial assistant at Our State magazine. Her most recent story was “Wax Paper Wrapper” (September 2012).