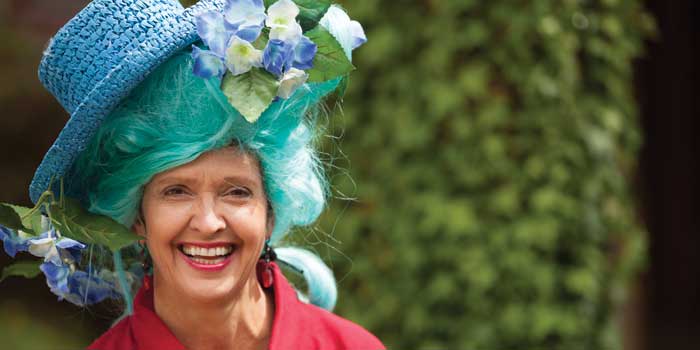 Caked in mud is not an easy look to pull off. But Anne Trufant does it with aplomb. Her clothes and curls are obscured beneath a thick, brown veil. All attention goes to a 100-watt smile framed by her cherry-colored lipstick.

Stop by Camp Kahdalea any weekend afternoon between June and August, and you’ll find its fearless director looking just like this. Sometimes, she wears an oatmeal mask (for spa day). Other times, she’s plastered with flour (for gold rush), doused in lake water (for carnival), or dressed in a garbage bag with twigs in her hair (for counselor hunt). Visit on a special occasion (the Kahdalea luau), and you’ll spot her in the royal regalia of Queen Bora Bora, complete with grass skirt, leis, a crown, and face paint.

Trufant does not rank cleanliness next to godliness. Nor is she a leader who fears acting a little goofy will undermine her authority.

For 23 years, she’s reigned over a 210-acre playground in Brevard with poise and dignity. The Queen of Kahdalea does so with just one decree: play. Play hard. Play fair. Play with others.

Sounds easy, but for the scores of adolescents who arrive at camp self-conscious and burdened with stresses of the school year, letting loose can be a challenge.

For Anne, though, fun comes naturally. She has mastered the French expression of joie de vivre — the joy of living. That’s because she’s been practicing it her whole life.

Anne packed her first duffel bag and footlocker in 1965. At the recommendation of family friends, her parents signed her up for a four-week session at Camp Glen Arden, then located on the campus of Christ School, about 14 miles south of Asheville.

Anne knew camp was supposed to be fun — after all, several local girls could vouch as much — but that didn’t mean the 9-year-old from New Orleans was gung ho about traveling 750 miles from home for the first time. “I was very skeptical,” she says. “I thought my parents wanted to send me away.”

But after 24 hours in the Blue Ridge Mountains, she was smitten. A bunk-full of excited 9-year-olds and a welcoming counselor melted any doubts she had about this foreign experience. On her second day, Anne phoned home to ask if she could double her stay to eight weeks.

“I loved every single thing,” Anne says, her voice picking up speed as she spouts off some of her first impressions. Cool, misty mornings beat muggy Louisiana summers. Communal living introduced her to new friends with fascinating backgrounds. Activities, from horseback riding to archery, kept boredom at bay.

Anne’s infatuation with the beauty of Glen Arden and its activities grew into a deep, unending love. She spent 12 more summers there, acquiring an encyclopedic knowledge of the camp property and its traditions, as well as invaluable leadership training from director Mary Bell, who “exuded authority and joy.”

Whether Bell delivered an inspirational lesson at Vespers, or told a campfire story about the fictional, tiger-like tajar creature, Anne listened.

“I hung on her every word,” Anne says.

“She was a consummate teacher with a great sense of humor who had no problem getting dirty with us,” Anne says. “She drew boundaries too, but did so with a twinkle in her eye.”

At the same time, Bell was watching Anne, in whom she identified similar qualities. Bell selected Anne to be a junior counselor and then a counselor, experiences that challenged and encouraged the future camp director to pursue her vocation, nurturing others.

Anne continued on the path of counseling as a student at Louisiana State University. Upon completion of her master’s degree in social work, she opened Hosanna House, a home for unwed mothers in Baton Rouge. During her time there, she had several encounters with Mother Teresa.

Anne, a devout Catholic, had a satisfying job. She worked with a Nobel Peace Prize winner, widely regarded as one of the most admired people of the 20th century. Anne shared her faith, offered hope, and demonstrated love to women in need. And she raised her four young children in her home state, close to friends, in-laws, and relatives.

In the fall of 1988, she received an out-of-the-blue phone call from an old friend who had gone to Camp Arrowhead, Glen Arden’s brother camp. He told her about a pair of camps, Kahdalea and Chosatonga, for sale in Brevard, just off Rosman Highway. “He said it would be an amazing thing for us to do,” Anne says.

A few hours later, a woman from her church approached her in the grocery store. “I was praying this morning and you came to mind,” the woman told Anne. “I’m pretty sure you’re going to move.”
Anne told her husband, David Trufant, an alumnus of Camp Mondamin in Zirconia. He was certain they should buy the camps. Anne, however, had some reservations: “I was a clinical social worker, David was a professional photographer,” Anne says. “We didn’t have the money to run two camps.”

Undaunted, David called a local banker, who knew nothing about North Carolina real estate, but said he’d research it.

The following Sunday, Anne sang at a different church in Baton Rouge. In the parking lot after the service, a man approached her. “So you’re Anne Trufant,” he told her, introducing himself as the banker. “You’ve made me miserable all weekend.” The next week, he met with the Trufants, handed them a lavender legal pad with an extensive to-do list, and said, “I feel I need to give you this loan.”

Anne continued to receive random phone calls from friends who said they were praying for her big decision, which she hadn’t talked about openly.

That summer, the Trufants visited Kahdalea and Chosatonga. Anne attended a Friday campfire, where director Julie Oates greeted campers with the same message Mary Bell used — “kneel reverently when you light a fire” — told the same tales, and led the group in singing, “Song to a Butterfly,” a song about friendship and fleeting moments, which Anne had written for a mission group in Europe in 1977.

“I decided God had given me enough signs,” Anne says. “I was meant to return to the mountains.”

Anne moved to Brevard in March 1990. There, the land enveloped her — the shade of the hemlocks, the smell of rhododendron, the sounds of waterfalls and creek.

“I have always felt at home in these green mountains,” she says.

That comfort meant a lot, as she approached an intimidating task of caring for about 300 girls ages 8 to 17 and another 60 or so college-aged counselors.

Camp had a profound impact on Anne. “It called out gifts in me no one else had seen. It made me grow,” she says. “And I wanted to replicate that for others.”

But the big-picture issues (imparting values, nurturing self -esteem) came along with a million smaller ones, from deciding the time to ring the wake-up bell to figuring out if she should make campers wear socks.

For guidance, the couple consulted former campers and counselors, who helped blend Kahdalea and Chosatonga traditions with those from Glen Arden and Mondamin. “I went to camp for more than a decade, so I understood the importance of sacred rituals,” she says.

Like her original camp experience, Anne didn’t take long to find her way at Kahdalea and establish a place “where a child’s soul can rest.”

For consistency, she set up a five-period day for activities Monday through Friday, which campers schedule individually, like a college student would.

To maintain surprise, she and counselors brainstorm camp-wide evening and weekend programs, which include favorites, such as counselor skits, Miss Kooky Kahdalea, and Christmas in July, but mostly incorporate new ideas to keep veteran campers on their toes. In recent years, the staff has concocted games to coincide with blockbusters of the time, such as The Chronicles of Narnia and Pirates of the Caribbean.

To inspire adventure, she encourages campers to take at least one trip a week, be it an afternoon visit to Sliding Rock or a four-day camping experience at Linville Gorge.

“Without headphones in their ears or phones in their hands, campers can hear each other and the sounds of this beautiful place,” she says. For her, Kahdalea means laughter and singing in the dining hall.

But her central challenge and achievement lies in the counselors she selects and trains. Most come through the camp’s junior counselor program, which gives her two years to vet their potential. Every Saturday night, she meets with counselors from about 6 p.m. until the early morning hours, hearing their concerns, discussing potential programs, and encouraging them to stay engaged in the camp mission, even when they are tired.

“She teaches us, by example, our first priority is human relationships,” says her son Adam Trufant, who will work as Chosatonga’s program director this summer. Counselors know that, every waking hour, their goal is to be present with campers, so they can identify their gifts and draw them out.

Upon joining the staff seven years ago, Adam realized how much work is required to make camp a thrilling experience. “When I was a kid, everyone seemed so strong, so wise,” he says. “When I became a counselor, I realized: We’re just college students. We have our own baggage. We make a lot of mistakes.”

Counseling is physically and emotionally exhausting, but Anne energizes staff members by showering them with the same attention she demands they give the campers.

At the reunion, Anne hosted a campfire. She watched with pride as one by one, the women filled the 14 rows of benches that branched out from the embers. Many had their daughters, future Kahdalea women, in tow.

Once they all sat, Anne stood and recited the words all Kahdalea — and Glen Arden — alumnae know by heart:

Kneel reverently when you light a fire
Kneel reverently and thankful be
For God’s unfailing charity
And on each ascending flame inspire
A little prayer which shall upbear
The sweet grace of warmth and light
For here again is sacrifice for
our delight.

Katie Hendrick lives in Sarasota, Florida. Her work has appeared in Garden & Gun, The Local Palate and Popular Mechanics. A third-generation camper, the second at Kahdalea, she attended from 1993 to 2003.