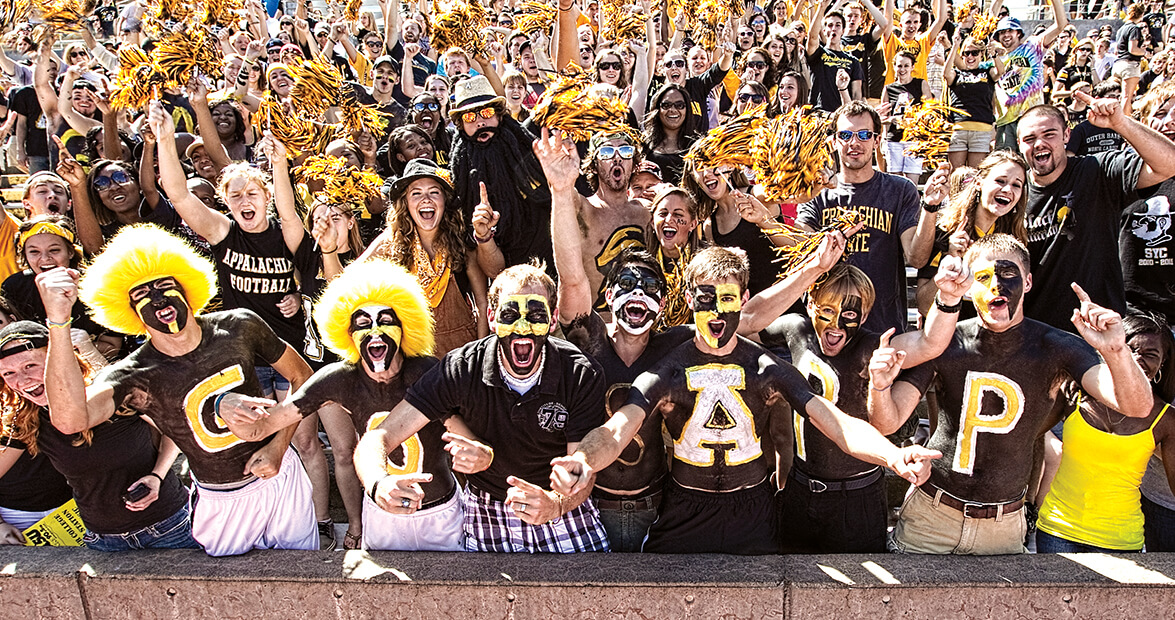 “Reminds me of Chattanooga,” said an Appalachian State alumnus from Raleigh, dressed in a black-and-gold Santa outfit. He was surveying a crowded tailgate lot in Montgomery, Alabama.

Appalachian State University is in Boone, which is a very nice place, what with the double-decked Kidd Brewer Stadium (a k a The Rock) and the mountains and all. But why Chattanooga? Well, that’s where the legend begins.

In 2000, after Montana knocked the Mountaineers out of the NCAA playoffs, ASU’s then-coach, Jerry Moore, started going to Chattanooga to watch the Division I-AA football national championship, which was held there every year until 2010. The drive was short. The tickets were cheap. Appalachian State had always been a respectable Southern Conference team. But watching other teams win the national title focused them. First, Chattanooga. Then, the world.

In 2005, Appalachian State won the first of three straight I-AA (now Football Championship Subdivision) national championships. Now, every true Appalachian fan has a long, involved Chattanooga story. The short version of each one? I was there.

After Chattanooga came Michigan. One day, an associate athletic director poked his head into Moore’s office. He was negotiating to have the Mountaineers play the Michigan Wolverines in Ann Arbor in 2007. Usually, large schools pay smaller schools big money to come to their stadiums for, ostensibly, a butt-kicking (Michigan would pay Appalachian State $400,000).

On paper, Michigan, the fifth-ranked team in the nation, had already won. Both teams were speedy, but Michigan was just plain bigger. Its starting offensive linemen weighed, on average, 21 pounds more than App State’s. Moore looked past all of that and saw something else: opportunity. “Whatever it takes,” Moore told the guy, “play them.”

The beating heart of the Mountaineer fan is still out there, in the dark, on the road.

Appalachian State got 3,000 tickets for the game. They sold out almost immediately. Those lucky fans saw an App State safety named Corey Lynch roar through the Michigan line, with just six seconds left, to block what seemed like an easy game-winning field goal. It was one of the biggest upsets in the history of sports. When the Mountaineers won their third national championship later that year, they put Michigan Stadium and the final score — App State 34, Michigan 32 — on the ring.

The Michigan Game crystallized the coalescing elements of modern App State fandom: traveling, tailgating, and punching up. In the years that followed, App State scheduled more major college programs, like Louisiana State University, Michigan (again), and Florida. The team lost all three of those games, but by then, the fans had started following them en masse.

Fans like Jeff Cook of Apex trailed the Mountaineers to Gainesville for the Florida matchup in 2010. “We lost the football game,” he says, “but we won the tailgate.”

Travel became an even bigger part of being a Mountaineer after 2013, when App State left the Southern Conference, moving up to Division I and the Sun Belt Conference, with its high-profile bowl games. In the SoCon, as it’s known, four of App’s opponents were within a three-hour drive. But in the Sun Belt, opponents were an average of 934 miles away. Goodbye, buses. Hello, planes.

Scott Satterfield, who played at App and was an assistant under Moore, became head coach in 2013. He saw the new job and new conference as an opportunity. The competition was better, and the visibility, higher. “Dream come true,” he says, before adding: “Didn’t start too well.”

Under Satterfield, App State went a dismal 5-13 in its first 18 games. But then the Mountaineers went on a tear, qualifying for a bowl game in 2015, the first year the team was eligible. And so, last December, the traveling tailgate machine with a reputation to prove whirred into action, heading to yet another faraway town. Black-and-gold RVs, trailers, and flags packed I-85 South from North Carolina to Montgomery, Alabama, the site of the Camellia Bowl. Fans filled rest stops in South Carolina and Georgia. On a charter bus from Winston-Salem, a 61-year-old preacher who was just a year old the last time the Mountaineers were in a bowl game (the 1955 Burley Bowl) led a prayer. “God is an App State fan,” he said to bowed heads. “You can tell because the sky’s going to be black.”

In the tailgate lot, the school’s athletic director walked through a sea of black-and-gold flags and Low Country boils, shaking hands with App fans. “I knew our fans would travel,” he said. In fact, there were so many fans that, during a pregame announcement, when a voice pronounced it “app-uh-LAY-shun” State, the boos were deafening. The announcer didn’t make that mistake again.

The game was an instant classic. After three quarters, the Mountaineers were down 24-7 to the Ohio University Bobcats, then started scoring, seemingly at will. Appalachian State kicked the game-winning field goal as time expired. “We thank you, App Nation!” Satterfield screamed to thousands of fans in the stands. App Nation screamed back.

There are even bigger prospects in store this year. Appalachian State will play Tennessee in Knoxville in early September. Then they face Miami, at home, in Boone. At long last. After years of traveling to the castles of college football’s elite programs, a big-time team is coming to Kidd Brewer.

But the beating heart of the Mountaineer fan is still out there, in the dark, on the road. On that December night in Alabama, a man in black-and-gold pants shuffled back to his seat on the charter bus, as the TVs flickered to life and started showing the 2007 championship game. He sat down, satisfied. “That felt like Chattanooga,” he said, and everyone else knew exactly what he meant.