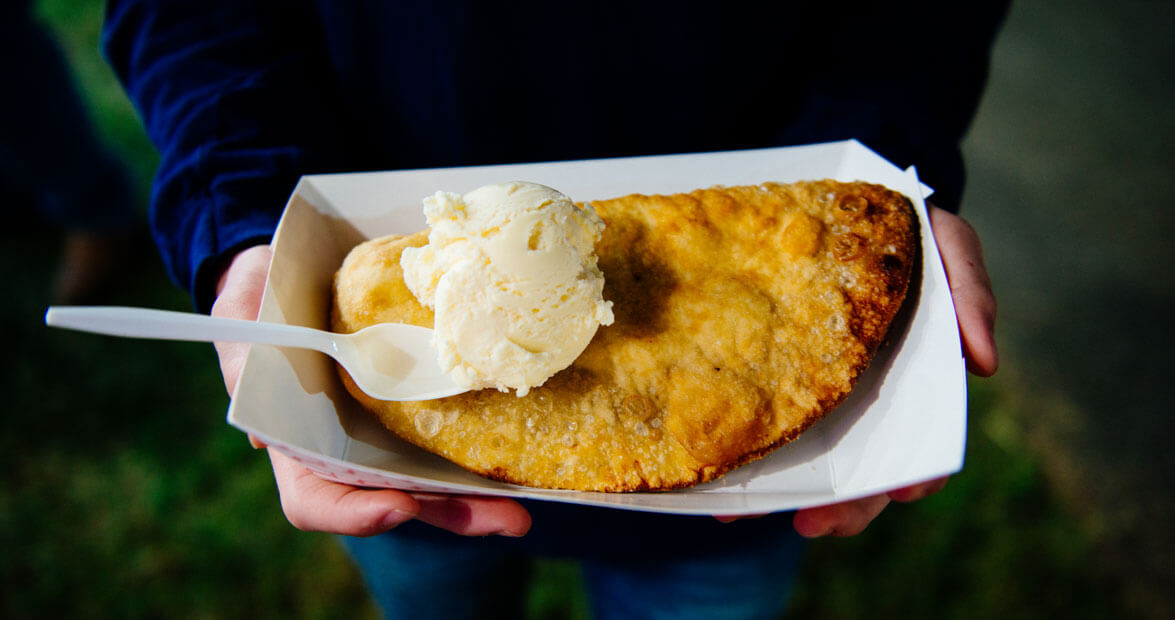 Last year at the Wayne Regional Agricultural Fair, members of Faith Church folded, fried, and sold more than 8,000 applejacks. If you’re from anywhere but here, you may be wondering, Wait, what’s an applejack? To local folks, it is a crispy, just-fried apple hand pie, well worth waiting in line for — even a 60-person line. “Growing up in eastern North Carolina,” Kevin Denton says, “everybody knows what an applejack is.” And at the fair, there’s only one tent selling them. Denton is the music pastor at Faith Church and the manager of their annual applejack initiative. The tradition was started by another church nearby in the late ’90s; then, a few years back, that church passed the torch.

Denton had never worked a day in food service, so how, exactly, did he become the pacer for a nine-day applejack marathon? “I have no idea!” he laughs. But he had worked at Faith Church for 14 years and eaten applejacks even longer. The first year, Faith Church stuck to the original recipe, which used biscuit dough as the crust. The next year, they commissioned the local Pizza Inn to produce thousands of eight-inch dough rounds. Denton’s crew, which includes almost 200 members from their church community, rehydrated dried apples and tossed them with cinnamon sugar. Then, at the fair, they assembled the hand pies, fried them to order, and sprinkled them with sugar. All the proceeds go toward Faith Church’s annual community service project, Faith Gives. As Denton puts it, “It’s a win-win.”

To try this pie, you’ll have to go straight to the source. But we’ve got home bakers covered, too. This recipe comes to us courtesy of Sheri Castle, an award-winning professional food writer, cook, and recipe developer.

For the filling: Stir together the apples and cider in a medium saucepan. Add enough water to cover. Stir in the sugar, apple pie spice, and salt.

Bring to a boil over medium heat, reduce the heat, and simmer until the apples have absorbed all of the water and collapsed into very thick, chunky applesauce, about 1 hour. Remove from the heat and stir in the lemon zest and juice. Let cool to room temperature.

For the dough: Place the flour in a medium bowl and make a well in the center.

Place the lard in the well. Pour ½ cup of the very hot water over the lard to melt it. Stir to bring the dough together, adding more hot water as needed to pull in all over the flour. (Your hands might work best towards the end. Gently knead the dough against the side of the bowl to pick up the flour.) The dough should be very soft, slightly sticky, and malleable, but not soggy or sloppy.

Line a baking sheet with parchment paper dusted with flour to hold the pies as they are formed.

Divide the dough into 12 equal portions, each about the size of a ping-pong ball. Working with one at a time (and covering the rest with a damp towel), roll the ball on a floured work surface with a floured pin into a very thin round about 4 inches in diameter. The dough should be as thin as it can be without tearing.

Spoon about 2 tablespoons of filling onto the lower half of the dough round. Fold over the dough to form a half moon and crimp closed the edges closed with fork tines. Transfer to a baking sheet.

Repeat to make a total of 12 pies.

Line a wire rack with paper towels to hold the pies as they are pan-fried.

Melt enough lard over medium-high heat to cover the bottom of a large, heavy skillet, preferably cast-iron. To test when the lard is heated properly, sprinkle in a pinch of flour, which should begin to brown without popping or hissing.

Working in batches, add 3 or 4 pies to the skillet. Do not crowd the pies. Cook until deep golden, flip, and cook the other side, 2 to 3 minutes per side. Adjust the heat as needed while frying the pies to keep the fat at the correct temperature. The pies will turn soggy if the oil is too cool and scorch if it is too hot. Replenish the lard as needed between batches.

Transfer the cooked pies to the rack. Sprinkle the tops liberally with sugar while still hot. Serve warm or at room temperature.