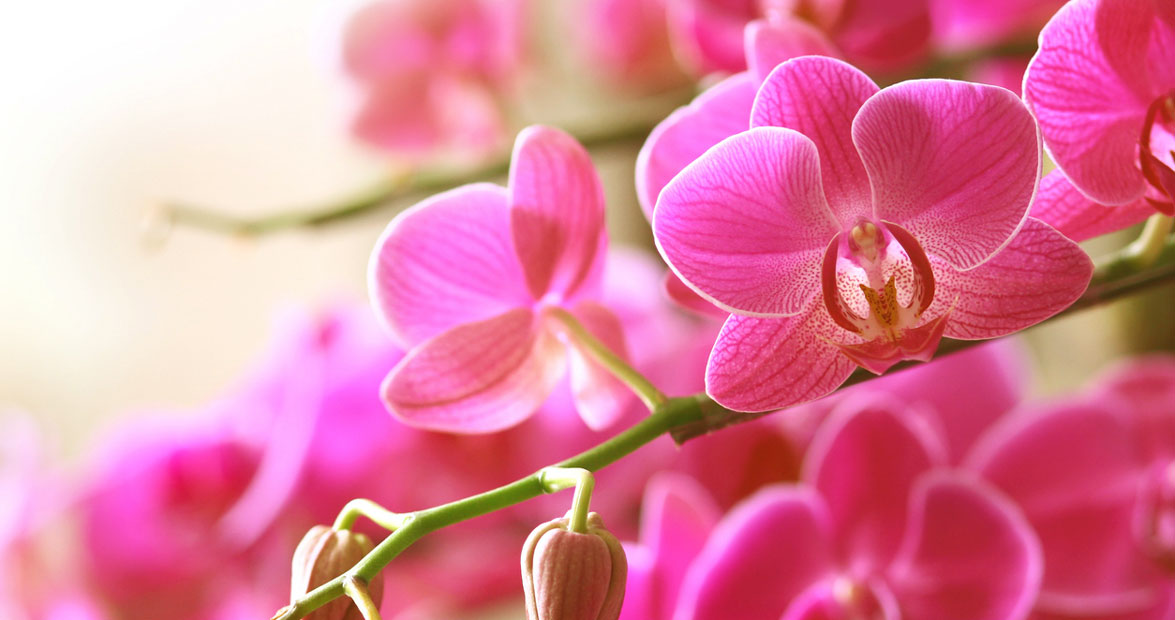 Orchids were everywhere at The Fresh Market the other day, so that’s what I got for my side table. And after our bitter winter, the tulips looked fresh and bright, so I got a bunch of those, too, and made a pretty arrangement in a water glass for my kitchen table. And I couldn’t leave the store without those stems of stargazer lilies and a cluster of creamy Lenten roses that have now found a place on the nightstand beside my bed.

I’ve taken to filling my house with fresh flowers every week, and even I am surprised at how transformative these blooms are, how they effortlessly change the personality of a space.

She had a perennial garden in her backyard — perennials because she didn’t have much money to replant flowers every year — and I can see her standing out there now, the sleeves of her white cotton blouse rolled to the elbows, a cigarette held between two fingers, the sun catching the tiny rhinestones in the upsweep of her cat-eye frames. She was the epitome of Southern grace in that garden, and it seemed the flowers she grew stood upright just for her.

She weeded and watered and tended and dug in the dirt and, in spring, she got her reward when the garden exploded in abundance, more color and scent than any yard could possibly contain, and off she went with the shears on Saturday mornings, carting armfuls of cuttings into the house and spreading the flowers across the kitchen table. She set to stripping leaves and snipping stems on the diagonal, and I, transfixed by television cartoons, was ignorant of whatever she was doing.

Because then I would’ve noticed how she arranged the tall branches of brilliant yellow forsythia in cut-crystal trumpet vases, fanning the woody stalks into a spray that looked like rays of sunshine.

I would’ve watched how she tucked blueberry-hued hyacinths, no longer than her hand, into a squat, knobby milk glass.

I would’ve seen how she trained her American Beauty roses to climb the trellis behind the porch swing. I would’ve helped her water the hydrangeas and bury pennies in the dirt to turn them blue — because blue is the prettiest color against white clapboard. I would’ve carried the tin can with her day-old Maxwell House coffee grounds to the edge of the garden and sprinkled the contents at the base of the camellia bush.

I would’ve laughed more when she plucked yellow buttercups and waved them under my chin until I admitted to liking butter — “I do like it, Grandma, I do!” — and I would’ve let her tickle me until I dissolved into a fit of giggles, and I would’ve put my hand on her back to steady her when she stretched to reach the high branches from the magnolia tree, and I would’ve filled the ceramic dishes with water for floating those magnolia blooms, one in every room.

I would’ve breathed in deeper that fragrance, like the sweetest syrup, and held it inside for as long as possible.

And I would’ve gone out to the garden for my grandmother when she was no longer able to and picked a bouquet of her favorites: irises, the violet and blue and magenta and yellow ones. The ones named for Iris in Greek mythology, the goddess of the rainbow, the link between sea and sky, the one who carries all the messages between heaven and earth.