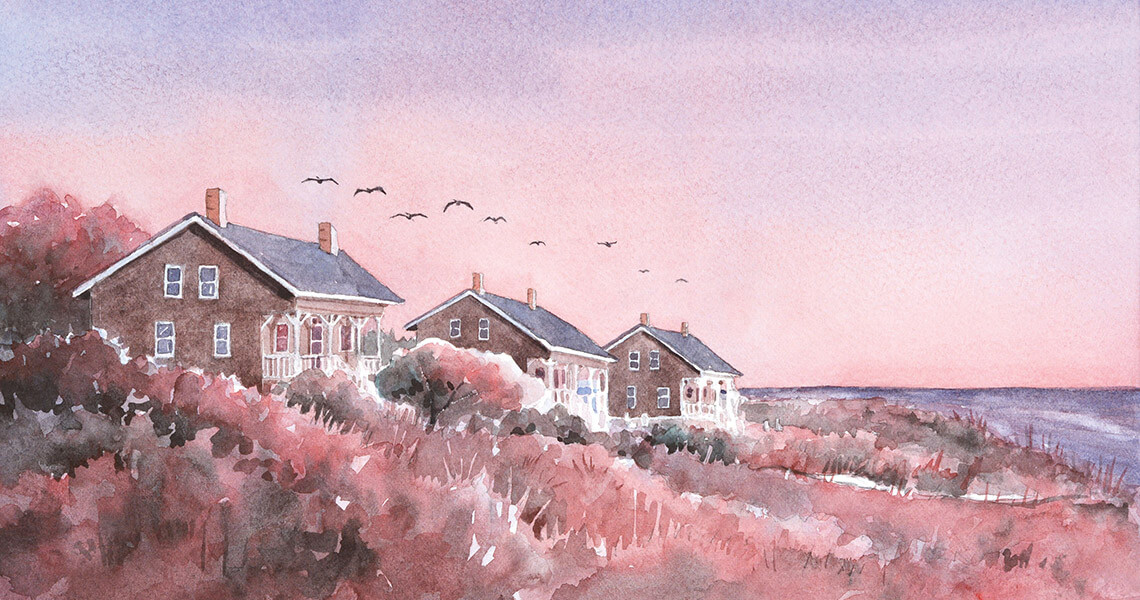 On this barrier island, near the jut toward Frying Pan Shoals, far from the lighthouse, from the market and the marina, from the spa and salon, from the golf carts and the pitchers of margaritas on tables beneath umbrellas strung with lights, three simple wooden houses, each built between 1903 and 1933, stand in a row on a dune thick with vegetation.

Capt. Charlie Swan and his family lived here during his time as the lighthouse keeper, and now anyone can spend a night here, in this secluded spot on Bald Head Island, and imagine what it must’ve been like 100 years ago, before the earth got so small, before we filled our empty spaces with swimming pools and parking lots.

Sit down on the porch of one of these houses in the evening, in one of the wooden rocking chairs whose back slats have started to curve and bow, and turn on the radio, the battery-powered portable that you only use during power outages but that you had the good sense to bring along. Find a radio show that you can tune into, low and quiet, and sit and rock and listen and be still.

You’ll hear the wind rolling off the sea.

The sky stripes pink, then orange, and the ball of sun falls behind the ocean. In the barest leftover light, you’ll see a family of white-tailed deer. There are about 200 deer living on this island, and, at dusk, they emerge on the beach, a few at a time, tramping over the dunes, grazing on the wild vegetation, stopping, lifting their heads, acknowledging.

You’ll see the lights of an anchored freighter out on the horizon, and you’ll notice stars, a few at a time, popping out against the darkening sky. With your head tilted back, it looks as though those stars are moving, even though you know from science class that it’s the earth that’s actually moving, spinning, and it occurs to you that everything you can’t see on this island is, in fact, moving, shifting — the loggerhead sea turtles swimming toward the shore to scratch out their nests and lay their eggs; the ghost crabs scampering across the sand, clawing for bean clams; the red foxes slinking through the underbrush; the slender scarlet snake moving silently across the sand.

By morning, that freighter will be gone, and all the creatures that moved around just feet from where you sat on the porch will have left tracks, traces.

In this house, Captain Swan, the keeper, left traces, too. You can see them in the scuffed indentions on the hardwood floor; in the stair banister, worn smooth by hands. You can stand in the breezeway of the house, a screen door between you and the ocean, and feel a legacy of caretaking, of keeping — the lighthouse, which was the job, of course, but more: a family, a beach, an island.

And out here, as the moon shines down on this wondrous place, and the solitude makes you believe you’re the only inhabitant, it’s worth being mindful, in this month noted for renewal and reverence, of the traces we all leave, the honor we all share in caring for our own small part of this earth.