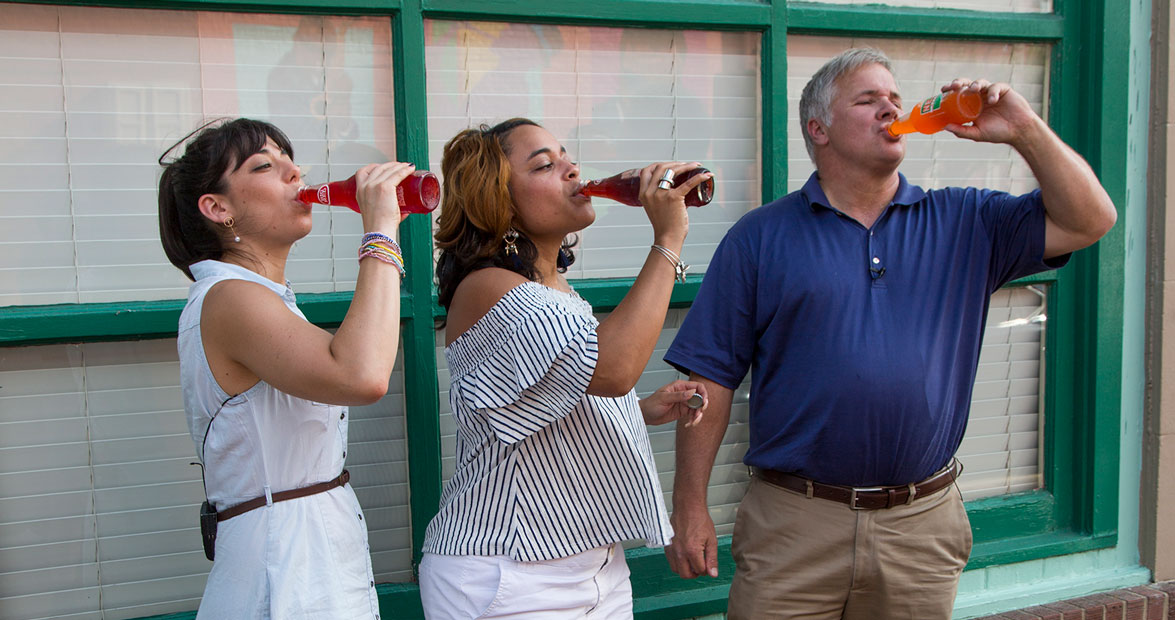 Goldsboro is like a tune that you want to hum again and again. The music starts with a stroll around the newly renovated and increasingly eclectic downtown. Recorded songs flow from the lamppost speakers. Someone plays the public piano on South Center Street. The wind whistles through the trees. The train tracks rattle. Even the jets overhead, taking off and landing at nearby Seymour Johnson Air Force Base, lend a certain rhythm to the air.

Stop in for a visit and add your own melody to the mix. You’ll be glad you did.

Well, a miniature train, anyway. Operated by the Kiwanis Club of Goldsboro, the train is popular with children and adults alike, and celebrates the town’s past as the midpoint of the Wilmington & Weldon Railroad. The mini train first rolled down the tracks in 1955 and continues to operate on weekends April through September, with tickets only $1 per ride. The park itself is open year-round, with amenities such as a playground and 10 tennis courts. Be sure to stop by and admire the Lady in the Park — a statue of Hebe, the Greek goddess of youth — standing atop a restored fountain.

Tip: Visitors can donate a children’s book and receive a free train ride.

Treat yourself to dessert from Mickey’s Pastry Shop

Mickey’s got its start in 1946 with the return of its namesake, Mickey McClenny, from World War II. Seven decades later, this family-owned bakery continues to use the same menu and equipment as it did on day one. All of its products — doughnuts, pies, brownies, and more — are still made from scratch daily, too. Mickey’s specializes in decorative wedding and birthday cakes, as well as petit fours, tasty cake squares that have all the artistic flair of a wedding cake, but without the wedding.

Tip: Order the cream puffs. They’re great for dessert — or for breakfast!

Veteran-owned and -operated, Goldsboro’s first craft beer store is where locals go when the sun goes down. The taproom and bottle shop features eight constantly rotating taps and more than 500 beers, along with wine and soda. There’s even sake for a touch of that “well travelled” feeling. WTB also provides a great starting point for a night on the town.

Tip: Just outside is a traffic circle with an art display in its center. A new piece is featured periodically, so you never know what breathtaking creation might be showcased.

Take in a show at the Paramount Theatre

The Paramount opened in 1882, with each of its three floors used independently of each other. A synagogue used to meet on one; a drill team practiced on another. A stage was added in the 1920s, and for a time, Paramount was the motion picture theater in Wayne County. Sadly, the original structure burned in 2005. Thanks to fund-raising and support from the community, the famed theater was rebuilt in 2008 with enough seating for 500 people and a stage large enough to hold the North Carolina Symphony. Today, Paramount hosts a wide range of performances, including plays, musicals, and concerts. There are also movie nights, with classic films once again shown in the auditorium.

Tip: Be sure to admire the restored clock on the street out front. It’s a popular meeting spot for folks gathering downtown.

Get outside and disc golf

Goldsboro is home to an active disc-golf scene, with players coming from near and far to play the town’s two 18-hole courses. Each venue has its own charms: Stoney Creek also features a dog park, volleyball court, butterfly garden, and more to enjoy. Berkeley sports amenities such as two softball/baseball fields, two volleyball courts, and two basketball courts.

Tip: There’s also a skate park next to Stoney Creek, perfect for those who want even more ways to play.

Get a taste of pulled pork history at Wilber’s Barbecue

This Eastern-style barbecue establishment has been called a phenomenon, a tradition, a political hangout — it’s all of that and more. Some of North Carolina’s most famous governors and senators have stopped by over the years to partake in Wilber’s pork. Presidents George H.W. Bush and Bill Clinton did, too. It’s one of only 22 joints on the North Carolina Historic BBQ Trail, as well as one of the few Eastern barbecue restaurants that still cooks its pigs entirely over hardwood coals. Owner Wilber Shirley and his crew split wood year-round to fuel the fire and help feed their customers’ demand — a busy holiday weekend can see as many as 130 hogs cooked.

Tip: Visitors are welcome to step out back and watch the ’cue get cooked under Wilber’s shed.

Go back in time at the Wayne County Museum

Dedicated to preserving the history of Goldsboro and the surrounding area, the museum is historic in its own right. The building it occupies was built in the 1920s for the local women’s club. When the U.S. entered World War II, the civic-minded ladies donated it to the government for the housing of troops headed overseas. Now owned by the Wayne County Historical Association, the museum highlights everything from the county’s role in the Civil War to the golden age of the automobile in Goldsboro, an exhibit open through October 2018. The photography featured throughout the museum comes from all across North Carolina, so pay close attention to the images: You may see someone you recognize.

Tip: The museum is part of the Civil War Trails program. Learn about Goldsboro’s role in the war inside, then head outside to explore nearby areas on the trail, such as the Goldsborough Bridge Battlefield.

Get a glimpse of Goldsboro’s predecessor

Waynesborough was the original county seat of Wayne County, but in the 1840s, after two railroad lines intersected a mile east of town, Waynesborough’s residents began moving to what was then known as “Goldsborough Junction.” Today, Old Waynesborough Park features nine reproduction buildings, including a functional blacksmith exhibit. (General Sherman is rumored to have burned the original structures as he pushed toward Raleigh during the Civil War.) Bibliophiles will especially enjoy the Print House, a replica 1900s printing facility complete with a printing press from that era. The park also includes 150 acres and four miles of trails along the Neuse and Little rivers.

Tip: There are several honeybee colonies along the trails. While hikers should keep a respectful distance, these bees haven’t been disturbed in years, and are quite peaceful as a result.