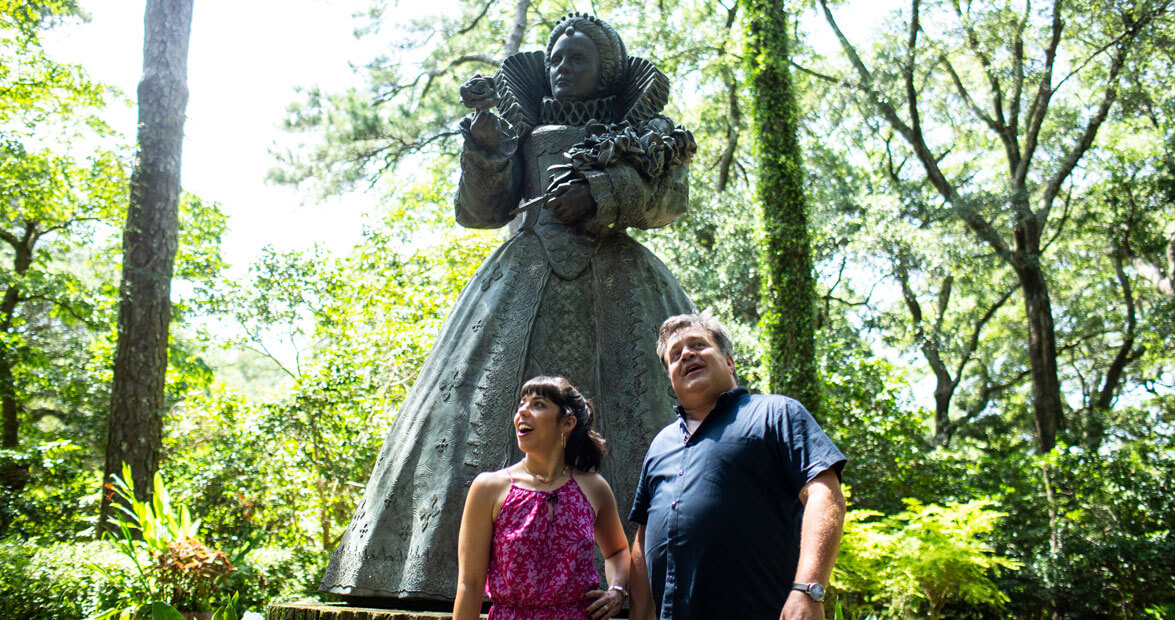 Wedged between North Carolina’s mainland and the Outer Banks, Roanoke Island is a physical gateway to the Atlantic Ocean. But it also, more than three centuries ago, served as a gateway for England’s colonization of the New World. Founded in the 1580s, Manteo, the town on the west side of the island, and Wanchese, the town on the east side, are some of the oldest communities in the country. Manteo was named after the Croatan chief who befriended the island’s first colonists, while Wanchese was named after the chief of the neighboring Roanoke Tribe.

Boasting beautiful waterfront views and plenty of family-owned businesses, Manteo and Wanchese make Roanoke Island a great place to relax, explore — and learn something about the past along the way.

Grab a brew and help the environment

Enjoy a glass of nitro cold brew or a cup of drip coffee in a rocking chair on the porch of, naturally, Front Porch Cafe. This shop roasts its coffee — 15 to 20 blends — at its Nags Head location. And don’t be surprised if your beverage doesn’t come with a straw. Front Porch has become a leader of reducing waste in Manteo — all of the cups are compostable, and the employees help clean up a beach access in Nags Head once a month. Buy a souvenir before you leave: Front Porch sells greeting cards, mugs, and artwork created by local artists.

Tip: This café serves more than one type of brew: Enjoy a cold beer at the bar in the back of the shop. 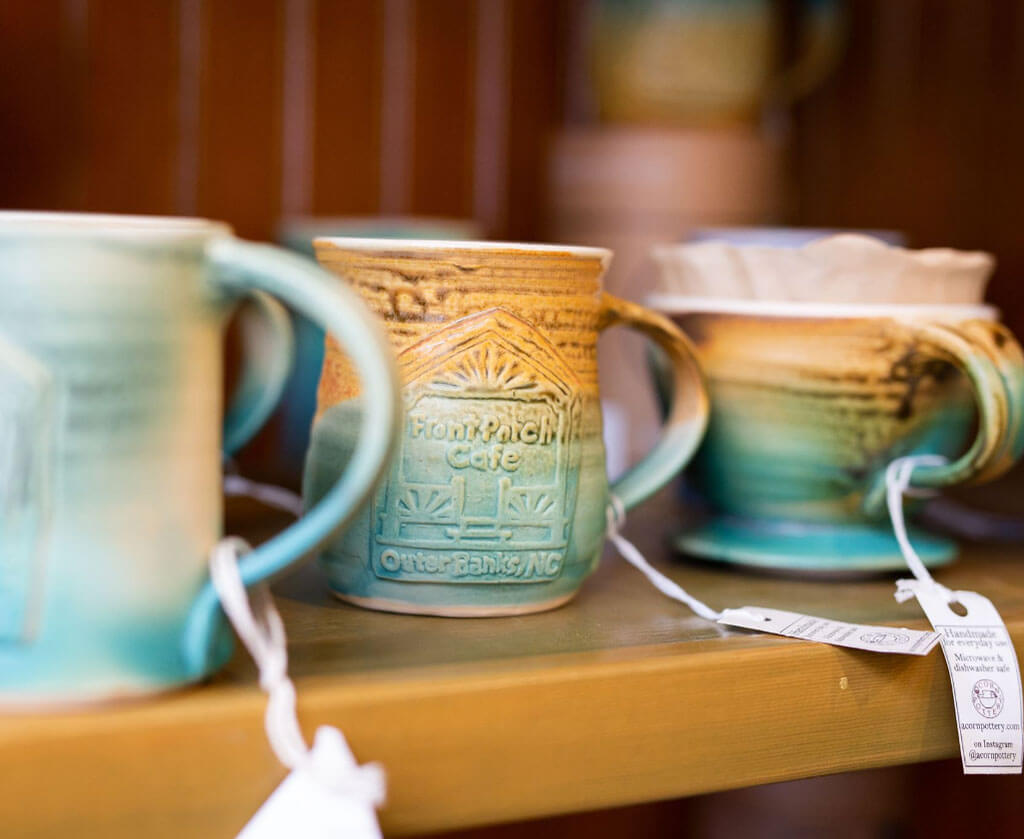 Taste fresh oysters and try a spin on a traditional cocktail

Take in Roanoke Sound while waiting for your dinner at Blue Water Grill & Raw Bar. Every day, Blue Water offers a fresh fish of the day and an oyster bar featuring a variety of locally sourced bivalves. For a beverage, try the Orange Crush — a local favorite. It’s Blue Water’s version of a screwdriver, and is made with freshly squeezed orange juice.

Sink your teeth into a classic Reuben

Poor Richard’s Sandwich Shop has been a staple in downtown Manteo since 1984, which is evident from the restaurant’s steady stream of customers. Come ready to wait in line, but don’t worry — these sandwich slingers move things along quickly. Poor Richard’s is best known for its traditional Reuben, but there are plenty of other sandwich and salad options, too.

Tip: Head to Poor Richard’s in the evening to enjoy a beer and live music in the restaurant’s pub. 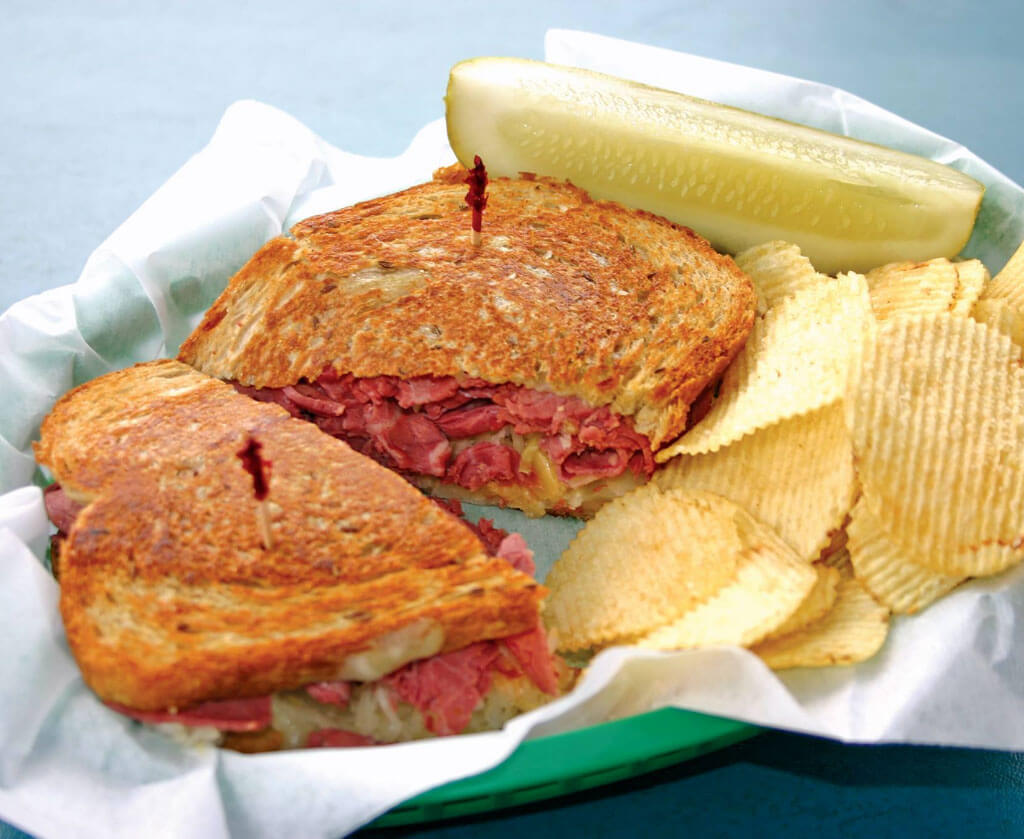 See the largest statue of Queen Elizabeth I in the world, more than 500 species of plants — including gorgeous hydrangeas, lilies, and camellias — and interact with butterflies in the greenhouse at The Elizabethan Gardens. The beautifully landscaped grounds are a memorial to the first English colonists who traveled to Manteo, went missing, and were never found. The garden’s construction was sponsored by the Garden Club of North Carolina and boasts many historically significant items, including a statue of Virginia Dare (the first English child born in the New World) that was carved in 1859 and an ancient live oak estimated to have been living in 1585.

Tip: Download the OnCell app to your phone for a free audio tour of the gardens.

Almost every summer since 1937, a group of local residents and college-age actors have brought the mystery of The Lost Colony to life at Waterside Theatre, overlooking the Roanoke Sound. Under a starry sky, watch an intense, choreographed fight scene, and see the heartbreak, fear, and joy that the first English colonists experienced in their quest to establish a life in the New World. This two-hour show is a great introduction to the area’s history. Come dressed for the outdoor elements: Bug spray, a rain poncho, and a jacket are good safeguards.

Tip: Learn more about The Lost Colony’s nightly production by attending a backstage tour, which includes a visit to the costume shop, the weapons armory, and an overall look at final show preparations.

Delight in seafood fresh off the dock

Do as the fishermen do and enjoy some blackened tuna tacos or a soft-shell crab BLT sandwich at O’Neal’s Sea Harvest. This family-owned seafood joint on the shore of the Wanchese harbor is both a wholesaler and a retailer. Since 2011, customers have been able to purchase O’Neal’s just-off-the-dock fish, crab, shrimp, scallops, and more to enjoy at the restaurant — or in the comfort of their homes. And don’t forget to order a slice of key lime pie.

Tip: Having friends over for a fish feast? Bring your cooler to O’Neal’s to transport your newly purchased seafood.

Immerse yourself in the lives of English settlers

Learn what life was like for the first English settlers in North Carolina and the Native Americans who tried to teach them how to survive at Roanoke Island Festival Park. Walk through an outdoor mock settlement, visit with costumed interpreters, go aboard a replica of the Elizabeth II ship, and interact with exhibits in the Adventure Museum. At the settlement site, take home an iron nail made by the blacksmith, try your hand at woodworking, and take a photo next to the flag of St. George.

Tip: If you don’t have time to experience everything you want to at the park, come back the next day. Admission covers two consecutive days.

The beers at the Lost Colony Brewery and Café won’t taste like your run-of-the–mill, hopped-up craft beer. This brewery aims to make British and Irish-style beers using a variety of malts, such as Marris Otter Malt and Crystal malt. The result is a rich, full-bodied brew. Be sure to order a cheeseburger to go with your drink.

Tip: Eat under an umbrella on the outdoor patio to enjoy the fresh air and people-watching.

After many shipwrecks, hundreds of rum-filled barrels washed up on the shores of the Outer Banks in the 17th and 18th centuries. Four years ago, Outer Banks Distilling was established in a historic Manteo building as a tribute to that history. Tour the distillery’s facilities and learn how they create their flagship line: Kill Devil Silver Rum, Kill Devil Pecan Rum, and Kill Devil Gold Rum.

Tip: Stop by the distillery during business hours to try complimentary quarter-ounce samples of the flagship rum before purchasing a bottle of your choice.

Set sail on the sound

Leave downtown behind and set out on a Downeast Rover sailing cruise. The single sailboat, or “rover,” has been run by husband-and-wife duo Kim and Kim Winslow (yes, they’re both named Kim) for more than 10 years. Pack a cooler full of snacks and drinks to enjoy (alcoholic beverages are permitted), and keep your eye out for pods of playful dolphins swimming through Roanoke Sound.

Tip: For an elevated sailing experience, book a sunset cruise. You can’t beat the view from the rover.

Immerse yourself in Manteo’s boatbuilding and sailing history

Learn about Manteo’s boatbuilding traditions at the Roanoke Island Maritime Museum, located in the George Washington Creef Boathouse. The boathouse has been a fixture on the Manteo Waterfront since 1940 and was used to build rescue vessels for the military during World War II. Learn about Creef’s legacy and try your hand at tying different sailing knots. After browsing the museum, walk over to the Roanoke Marshes Lighthouse. This lighthouse is small in stature, but its picturesque red-shingle roof and two-foot-tall lens help give the Manteo waterfront its quaint character. The inside of the lighthouse features exhibits on Warren Robinson O’Neal, one of the influential boatbuilders on Roanoke Island.

Tip: Sign up for the Outer Banks Community Sailing Program through the museum. Adult and youth programs are available for individuals interested in learning basic, intermediate, and advanced sailing skills.

Take a stroll along the Manteo Waterfront Marina

Enjoy the idyllic Manteo scenery by taking a stroll along the Waterfront Marina. Take a seat in the gazebo near the water during the evening to see the sky light up with deep oranges, pinks, and purples. If you have little ones, the playground is also a great place to catch some views while the kids expend some energy.

Tip: Purchase a scoop or two of Big Buck’s Homemade Ice Cream at the Manteo waterfront location before you set out for your stroll along the water. The homemade waffle cones covered in chocolate and decked out in sprinkles are a must.