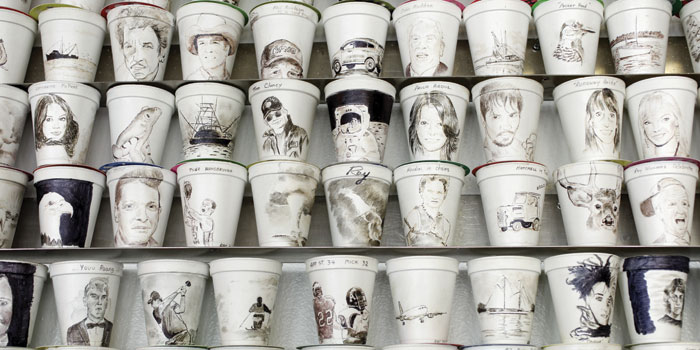 Styrofoam lasts forever. Toss it in a landfill, and those who know about such things tell us it will be there 500 years — maybe even 5,000 years — from now.

Art Cozart’s Styrofoam coffee cups might last longer. More than 1,000 of them line shelves in the break room where he works, sit on mantels and tabletops in friends’ homes, and fill cardboard boxes in his family’s closets. One coworker plans on taking his Cozart cup with him when he dies.

On the cup, in fine lines of black ink, Cozart captured a perfect moment. In it, Brad Frick, smiling broadly, cruises Lake Norman with his buddies on a sleek Grady-White boat.

“He made me look good,” Frick says. “I have told my wife, ‘I want it buried with me.’” (Story continues below the video.)

For the fun of it

To his fellow baggage handlers at the US Airways Charlotte hub, Cozart is the cup guy. About 10 years ago, on a break between flights, he finished his coffee and instead of chucking the cup into the trash, he picked up a pen and doodled a sketch of an aircraft carrier, a two-inch slab of steel cutting across placid ripples, bound for glory. Coworkers, taking a break from lugging luggage and dodging jets, were impressed, and more than a little surprised. They egged him on.

He drew silly stuff. A baggage truck parked outside a saloon. A jet bridge a mile high. Evel Knievel jumping over a row of baggage carts.

“Just trying to get a laugh,” says Cozart, a tall, lean man whose blue eyes spark with a steady flow of jokes — some of them corny, some of them really funny.

But Cozart’s drawings weren’t just funny. They were good, even in the beginning. The Gilligan face smiling out of one of the clear plastic squares Cozart uses to display some of his cups looks just like the character from the 1960s series. You expect to hear Sgt. Carter yelling, “I can’t hear you!” at Gomer Pyle. The lightbulb in Uncle Fester’s mouth appears to shine.

Cozart watched a lot of TV growing up in Cramerton, Cozart says in his Gaston County drawl.

Before too long, coworkers started making requests. One of Frick’s buddies gave Cozart the photo from the boat trip. Others asked if he would draw the faces of their children. He’s happy to oblige, but he does have one rule: He won’t draw anything that might embarrass somebody or hurt a person’s feelings.

Some coworkers have asked him to immortalize friends and family. “I’ve done some for people who had a loved one pass away,” Cozart says. “They brought me the bulletin with a picture from the funeral. I know it meant a lot to them.”

Nancy Cozart is sorry some of the cups went home with people before she had a chance to see them. Cozart had been drawing them for a short while when he brought some home in his jacket pocket one day. “I just pulled a couple out and said, ‘Look what I’ve been doing,’” he says, tilting his head, unconsciously repeating the nonchalance of that moment. She was amazed. Wasn’t he amazed?

Without any formal training. The last art class Cozart took was in his senior year at Belmont’s South Point High School; at the end of the year, the teacher asked to keep his sketchbook.

Cozart shrugs. The glory is God’s, he says. A smile tugs at the corners of his lips.

Married to Art for 27 years, Nancy is his biggest fan. An avid photographer, she insists on taking a snapshot of every cup he illustrates before he gives them away. She’s the one who calls newspapers, local news stations, and magazines to say, hey, you ought to see these cups her husband is drawing. She’s the one who frames clippings of articles that others have written about her husband, such as the one about the Mint Museum Uptown inviting him to be a part of their grand opening exhibition in October 2010. She hangs them in the family’s corner of fame in their den.

Depending on flight schedules, Cozart can finish a couple of cup drawings in a shift. He comes in off the ramp, a noisy, concrete expanse gray with exhaust where planes taxi up to the terminals to unload one set of passengers and baggage in exchange for the next. He heads to the break room that’s only marginally quieter, the din of conversation and a television that’s always on pinging off the block walls. He pours himself a cup of coffee and takes a seat in his regular chair not too far from the door. He visits with friends who come and go in a constant circulation of flight assignments, a whoosh of fumes and jet engine wails sweeping in every time the door opens.

He downs his last swallow, pulls out one of the four or five pens poking out of his shirt pocket, smooths out a picture of his current subject, and starts drawing.

A single cup, depending on his subject — a face, sometimes a group of people, often a boat or an animal — usually takes about 90 minutes.

It doesn’t take long for the illustrated cups to accumulate. When he first started drawing them, a coworker taped them to a window facing the ramp. When he filled up the window, his friend took some scrap metal he found lying around the airport and built a set of shelves for the wall next to the window. Some of the early drawings — Farrah Fawcett, Ronald Reagan, a profile of Jesus — remain on those shelves, looking just like they did 10 years ago when the cups had barely cooled from Cozart’s coffee. Today, the cups go home with people likely to treasure them forever.

Cozart pretty much only creates the cups at work, even though he now has a website where anybody can order a custom cup. It’s a good way to fill downtime between flights, and he has his shift manager’s blessing.

When he’s home, he’d rather spend time with his family. He and Nancy have three children, and their youngest, Cameron, is 13 — young enough to live at home and still want to hang with his mom and dad now and then.

On cloudless nights, Art and Nancy, and any of the kids who want to join them, set up a telescope, sometimes in their backyard, more often on a remote beach or a pitch-black mountaintop. It’s fun to pull into focus the night sky’s shimmering beauty — even the easy pickings, like Venus and the Orion Nebula. But the Cozarts get the biggest thrill when they catch up to celestial phenomena whose light is millions of years old by the time it reaches their retinas. When Nancy talks about spotting the Dumbbell Nebula on vacation at Edisto Island, South Carolina, 15 years ago, her voice still goes breathy.

On clear days, the couple’s gaze falls downward. These two are serious artifact hounds. Cozart picked up the habit when he worked at Lakewood Golf Course in Cramerton before he and Nancy started dating. He found arrowheads all over the place as he tended the grounds. Today, he and Nancy are members of the Piedmont Archaeology Society, and when they get the chance, they grab their flipping sticks and head to the nearest freshly plowed field or newly graded construction site (they always ask for landowners’ permission). Sometimes Cameron joins them, but he usually ends up throwing rocks, Cozart says, while he and Nancy concentrate on the ground.

Shadow boxes hanging on terra-cotta-colored walls in their sunroom hold some of the prizes they’ve collected over the decades: an ancient preform stone blade Nancy found on Mother’s Day 2007; 7,000-year-old arrowheads; and shards of pottery fired centuries before European settlers made their way to the Catawba Valley.

One of the frames holds a horse tooth they discovered on Edisto Island, their favorite vacation spot, in 2009. A curator at the Schiele Museum in nearby Gastonia told them it was 1.4 million years old. “I guess that makes it one million four hundred thousand and two years old,” Cozart says.

Nancy smiles brightly at Art, despite the fact you know she’s heard that joke more than once.

Cozart didn’t start drawing on a Styrofoam cup for any lofty reasons. It’s what he had in his hands when he spotted the aircraft carrier in a magazine. Sure, it’s great that he’s kept hundreds, and maybe eventually thousands, of cups out of a landfill.

“I guess I’m one of those green artists,” he jokes.

But with that first cup and hundreds of others that followed, he didn’t think about the fact that Styrofoam will probably outlast us all.

That’s the thing about Cozart. He’s a simple man. He loves God. He loves his family. He appreciates the beauty that’s all around us.

And he has this knack for connecting with things that last forever.

See more of Cozart’s cups and illustrations at thecupguy.com.

Diane Summerville is the senior editor of Our State magazine.