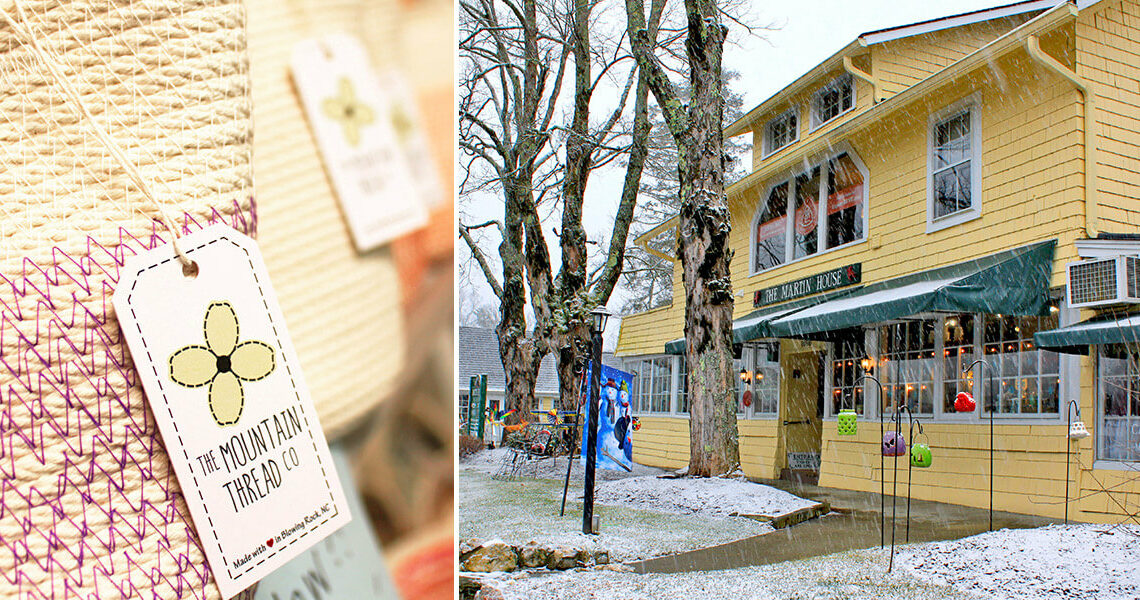 It almost sounds like the beginning of a children’s fairy tale: In the heart of Blowing Rock stands a big, yellow house. In the center of the house whirrs a sewing machine. And at the helm of the machine, Katherine Lile tells a story with every stitch.

A textile artist and fourth-generation quilter, Lile specializes in using her quilting skills to create rope baskets — and there’s nothing she loves more than teaching her craft to others at The Mountain Thread Company. “Our sewing machine is front-and-center; something is always in production,” she says. “Whether it’s tips and techniques, or answering questions about the type of rope and where it’s from, we’re an open studio so you can come see the process and ask questions along the way.”

Lile finds that visitors to her shop don’t really need a basket, but they’ve come to Blowing Rock for a mountain getaway, and they’re searching for something special to commemorate their visit. And Lile isn’t the only Blowing Rock artist who’s eager to teach her craft. Just like Lile, there are makers across town who delight in sharing their talents with visitors. Read on for five local artists whose studios are open for business — you may just learn a thing or two while you’re there.

Elevate Your Getaway in Blowing Rock 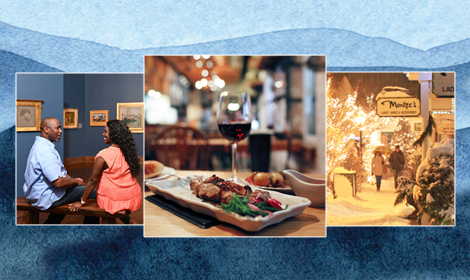 Take home a coiled-rope basket at The Mountain Thread Company — or learn how to make one yourself. photographs by Amanda Lugenbell

Like most quilters, Lile feels a sentimental attachment to fabric scraps. “Quilters tend to keep every last ridiculous scrap of fabric,” she says. When her children were babies and she had limited crafting time, she discovered she could incorporate those scraps into her rope baskets — “a quick project I could pull together during nap time.”

Now that those children are growing up, they often join in when Lile teaches coiled-rope basketry classes at The Mountain Thread Company. “People like making rope baskets because it’s approachable for new sewers,” she says. “In the course of a two to three-hour class, you can learn a new technique.”

Lile loves to hear the stories behind her visitors’ fabric choices. “I hear from people all the time about what special fabrics they’re incorporating or who they’re making them for as a thank you — or as a way to remember somebody who’s no longer around.” 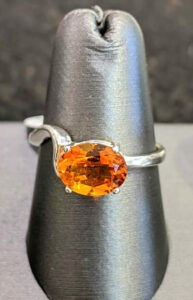 After retiring from the Army as an emergency field surgeon, Randy “Doc” McCoy decided to change paths completely and become a geologist. And what better place than Blowing Rock to launch McCoy Minerals, a gem mining and jewelry business? “We’ve got the formation of the Appalachian Mountain Range — volcanic and metamorphic rock — so North Carolina has the capital of gemstones for the United States,” McCoy says.

Together, Doc and his wife, Trina, find, cut, and set stones like amethysts, rubies, and emeralds. Their gem-cutting workshop is open for observation, and they welcome visitors to come to check it out. “We never get bored. We get lots of questions from people who will bring in stones that they found in their yard,” he says. “That challenges us and helps us stay fresh.”

For people who want to get in on the action, their website offers upcoming field trip adventures such as gold panning and ruby sapphire digs. “This summer we’re even adding a fossil dig in Tennessee — a new opportunity we’ve never had before.”

Janet Calhoun of Bolick and Traditions Pottery is the fifth generation of her family to throw clay. photographs by Amanda Lugenbell & David Rogers

From their Bolick and Traditions Pottery shop on Main Street, Michael and Janet Calhoun can tell you about five generations of potters throwing clay before them. “In the late 1800s, the Owens were making pickling crocks and canning jars and that type of thing — utilitarian pottery,” Janet says. They were Seagrove potters.

When Janet’s parents, Glenn and Lula, had an opportunity to buy Glenn’s grandfather’s homeplace near Blowing Rock, they started Bolick Pottery here. “My parents are probably most known for dinnerware. Dad does swirl pieces with two colors of clay, and my mom does a lot of mugs and bowls and sugar and creamer sets — they’ve made thousands of items like that,” she says.

Twice a year, the Calhouns invite visitors to their kiln opening at the homeplace. “If you’re here at 10 a.m., you can watch us unload the woodburning, or groundhog kiln,” Janet says. It’s a great opportunity to see the way her grandparents fired their pottery before electric or gas kilns. “It’s a more traditional way of doing pottery,” she says, “and we love for people to come see how that works.”

People usually have one of two reactions when they come into Larry and Cyndi Ziegler’s candle store and see their collection of hand-carved candles. “They’ll either say, ‘Oh my gosh, my grandmother used to have one of these!’ and it’s like a walk back in history, or, ‘Oh my gosh, is that wax? Is that a candle? No, it’s not!’” Cyndi says. “Whether they’ve never seen one before and are totally amazed or they remember it from when they were a kid, a lot of times they buy one and have a happy memory.”

In fact, in the same historic Martin House where Lile runs The Mountain Thread Company, the Zieglers make each candle by hand. Visitors can watch them and their staff through a 10-by-8-foot glass window. They dip one layer of wax at a time, cooling it in water between each dip. “We do that 30-35 times,” she says. “Then we have 10 minutes to take tools and cut the wax while it’s still malleable.”

Shoppers looking for a more traditional jar candle can find those here, too, as High Country Candles offers 85 different scents. Jar candles are made by hand, too, one pitcher of glass at a time. “We use a great type of wax and it has a quality called ‘hot throw,’” Cyndi explains. “When the candle is hot, or liquid, the scent is released, but when you’re not burning the candle there’s no way for the oil to be released between burnings. So you always have scent in your candles.” 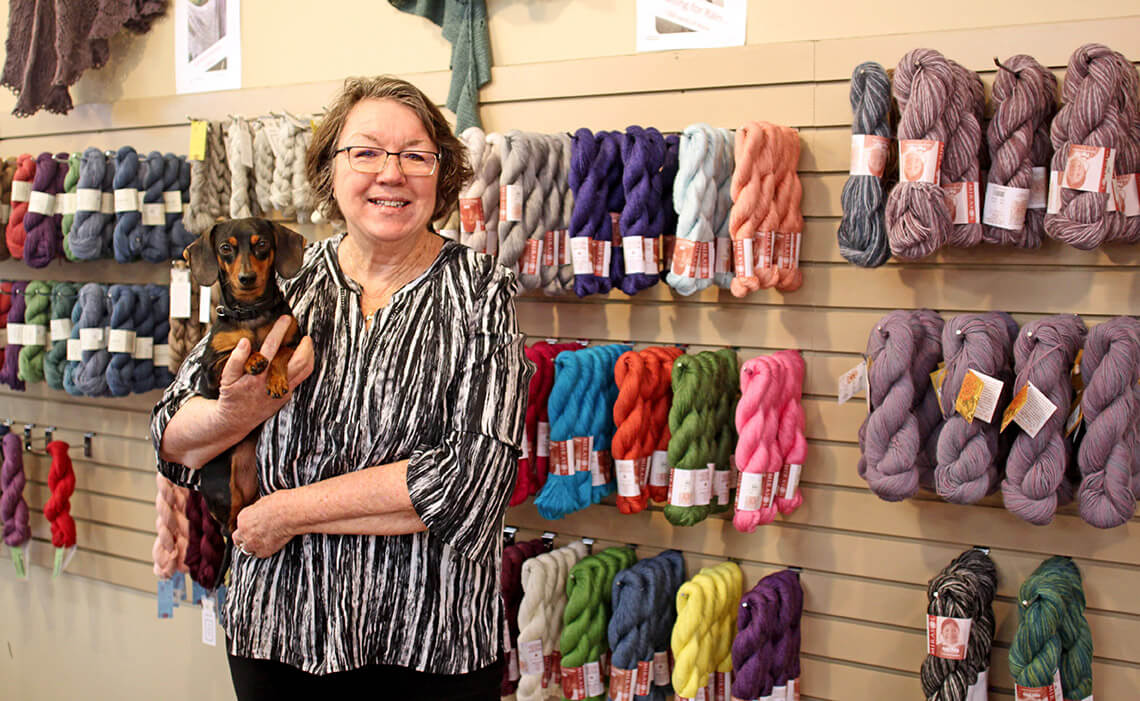 Colleen Taber will answer all of your knitting questions at Unwound Yarn. photograph by Casey Hawkins

Colleen Taber’s shop mascot, a miniature dachshund named Lizabeth, gives free snuggles to visitors looking for unique and high-quality brands of yarn. “If you sit in one of our comfy chairs, she will most likely jump in your lap,” Taber says.

Once you’re settled in — or while you’re wandering through Unwound Yarn getting a feel for the selection that ranges from warm and wooly to light and lacy — Taber herself will gladly take over with answers to all your knitting or crocheting questions. “I didn’t know how to knit until about a year before I bought the shop,” she says. “But I like knitting because it allows me to be active while being calm and settled.”

Taber also likes the idea of keeping the art of knitting alive and passing it on to others through private lessons in her store, or as gifts. “I just finished a blanket for my younger daughter who doesn’t live near me,” she says. “I told her that each stitch had love and prayers embedded, and that just holding it would keep me close to her.”