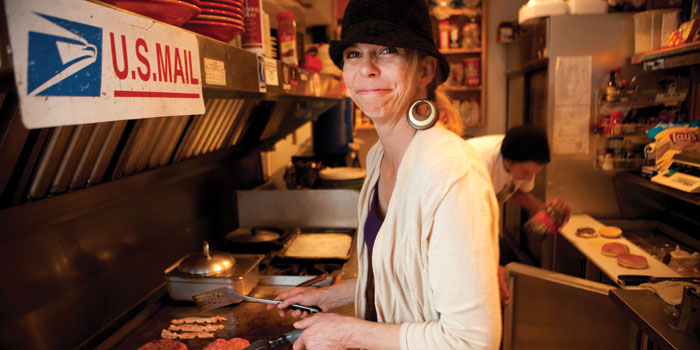 The spirit of Art Glidden hovers in every nook of his old cafe, as friendly as the celebrity photos that grin from the walls, as eternal as the sand that clings to the corners. For new owner Tammy Nichols, Glidden is a welcome ghost, guiding her as she leads Art’s Place, the restaurant he opened in 1978, through its fourth decade.

The squat building is scarcely as big as a pair of double-wide trailers squished together. It sits on the beach road, its worn porch facing the sea, with only N.C. Highway 12’s narrow band of asphalt and a row of oceanfront houses holding back the wilds of the Atlantic.

Folks who haven’t stopped by since Glidden handed the keys to Nichols a few years ago will find the exterior of the old place transformed. A coat of paint, blue as the deep sea, refreshed the brick-and-shingle exterior and serves as the backdrop for local artist David Wise’s mural of fantastical, aquatic scenes. But the most important element — the familiar, comfortable atmosphere — remains the same.

Much as it was when Glidden was alive and in charge, the menu offers grub to satisfy hungry beachcombers and surfers, not nouveau cuisine for travelers with lots of spending green. And it’s the burgers that keep locals and tourists coming back.

As with any great hamburger, it all starts with the beef. It’s ground fresh, and the staff makes the patties by hand, Nichols says. The first bite provides proof: The grind is fine but not mealy, and the meat is moist but not greasy with an honest, hearty flavor.

It takes more than meat to create a great hamburger, though, and Art’s Place offers lots more. Everything that goes into this elemental meal drips with the sincerity of the place itself: the crisp-on-the-outside, soft-on-the-inside, hand-cut fries; the slippery, sweet fried onions; the homemade chili. On top, the fluffy kaiser-roll pinwheels are soft, but the toasted undersides give them the heft to handle the juicy meat and gooey cheeses and chili, keeping everything together until the moment the burger meets your mouth.

Nichols can count 17 different toppings in her head. But in actuality, the possibilities are exponentially vast because Art’s Place will make burgers any way its customers want them.

An Outer Banks resident for 20 years or so, Nichols came to Art’s Place on occasion but didn’t become a regular until a few years before Glidden died in 2010. By that time, she had raised four children. Glidden’s heart was failing and his business was faltering when Nichols got to know him. Gradually, as Nichols realized the severity of Glidden’s situation, she transitioned from frequent customer to friend and successor.

“The restaurant was in a moment of difficulty,” she says. “They were having a hard time, and we were there, and things just sort of happened from there.”

It didn’t matter that she had no restaurant experience; she learned from a master of hospitality. When Glidden was well enough to be at the restaurant, he guided her transition, and he prepared his regulars for a new face behind the bar.

“I’ve got to tell you, Art gave me a blessing,” Nichols says. “Art was there every day. … We would sit outside, and we would greet people together. He told me what he did, and I did things similar to what he did.”

Spend an evening at Art’s Place, and you’ll see a cross section of the Kitty Hawk community bound up the short staircase and through the screen door. Two elementary-school age children sit at the bar, watching the action at the grill. A singer-songwriter with a scruffy, salt-and-pepper beard strums his guitar and croons a Gordon Lightfoot song up front. A gray-haired couple in their 60s orders the nightly special while a quartet of 30-somethings cheer on the action on the big screen on the wall.

Debbie Glidden, Art’s sister-in-law, says Art knew how to draw people out and create a spirit of conviviality. “The place has good energy,” she says. “There’s a lot of kids who do come here, and Arthur was close to a lot of them.”

She recalls the regulars whose 3-year-old girl used to paint pictures for Art and deliver them to the nursing home where he spent his waning years. Nichols and her partner spent a fair share of time visiting Art there as well.

“They were very, very good to Art,” Debbie Glidden says. “They looked after him a lot. … I was glad that people like that took over the restaurant, where they still recognized Art, and they didn’t change anything. They left it the way Arthur really wanted it.”

“It’s just a neighborhood hangout,” Shaw says. “You always saw the familiar faces. The welcome mat was always out for whoever came to Art’s Place. … You always found good food and good company, and it’s just always been a staple.”

Glidden offered Kitty Hawk more than a public living room. He and his place served as an emotional anchor in the seasonal, seaside community, where the whims of tourism and the capriciousness of the ocean pose a constant threat to stability.

His work as a philanthropist set the standard, as he helped to establish and run the Joy Fund, which raised thousands of dollars to help make Christmas dreams come true for hundreds of underprivileged families in the Outer Banks. His sister-in-law says his yen to help others was born of a difficult childhood spent in foster homes.

“He knew what it was like not to have a Christmas,” Debbie Glidden says. “He never wanted anybody to be in that situation, like he and his siblings were in.”

Glidden’s charitable efforts earned him the Order of the Long Leaf Pine, one of the highest honors the governor can bestow upon a North Carolina citizen.

“Art was a hero,” Nichols says. “He was a hero to me. He was very giving. He gave to the community in a huge way. … He totally earned that award because he did nothing but give.”

Glidden died at age 73 in August 2010. The family waited until the Saturday after Thanksgiving to hold the memorial service, when the tourist season was done and the summer residents cleared out for the winter. A group of friends scattered Glidden’s ashes on the beach across from his restaurant.

“I just wanted it to be intimate,” Debbie Glidden says. “I knew a lot of people who went to Art’s and knew Art was always there at Thanksgiving to close up their cottages.”

Nichols spends four or five days a week walking the floors that Glidden smoothed over the course of three decades. Among the few changes she made was extending the hours. Now Art’s Place serves dinner, where it was formerly just a breakfast and lunch spot.

When her children are home from college on breaks, they lend their hands, manning the grill or running food to the tables. And when her children are at school, Nichols can lean on her other loved ones, the regulars who show up at Art’s Place, day-in, day-out.

“They are a huge family,” she says. “It’s absolutely a local crowd.”

Amber Nimocks, a freelance writer and editor in Raleigh, has written for The Washington Post, the Fort Worth Star-Telegram, and Fodor’s travel guides.