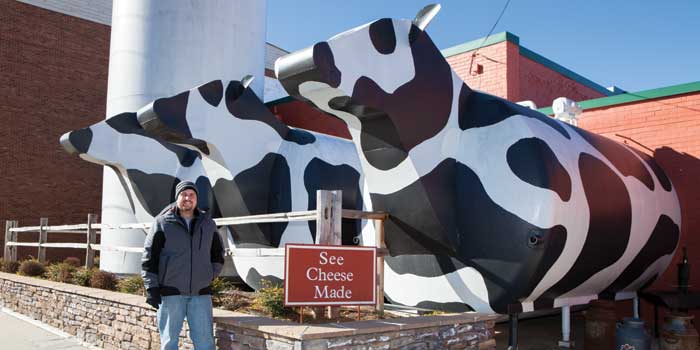 They stand as stone-cold sentries. But there’s a stately lack of seriousness to their stare.

Three milk storage tanks, brought to life by the work of a few businessmen, a teacher, and a senior welding class, now look out at passersby as 23-foot-long steel Holsteins guarding their patch of ground fenced in by red petunias and sunflowers. People stop to take photos. As a result, West Jefferson’s Ashe County Cheese is drawing a few new eyes.

It was a series of revitalization projects that led him to fix up the tanks in 2011. “We wanted to do something with them; we just didn’t know what,” he says.

Then he met Stephen Willingham, a local artist who, with his wife, Lisa, runs the Artists’ Theater across the street from the factory.

Transforming tanks into cows was a difficult concept to grasp at first, Williams says, but he was willing to go for it.

So Willingham called Rusty Rogers, a welding teacher at Ashe County High School, and showed up with a pattern.

“It was a lot of work,” Rogers says. And the work came at the busiest time of the year for the kids, as they were preparing for finals and welding certifications, but the project offered real-world pressure and a chance to hone untested skills.

“They sort of had to jump in with what they already knew and apply it,” Rogers says.

Thomas Miles, a senior in the class who now works full-time as a welder, said the cows helped start his career. “It made me think this was what I wanted to do for the rest of my life,” he says.

Apparently you can’t just mount three 250-pound, 8-foot, steel cow heads to 5,000-gallon milk tanks and not get noticed. During the installation on Memorial Day weekend, a videographer shot and posted to YouTube the movie, Three Cow Town.

“It’s kind of a landmark now for the town,” Rogers says.