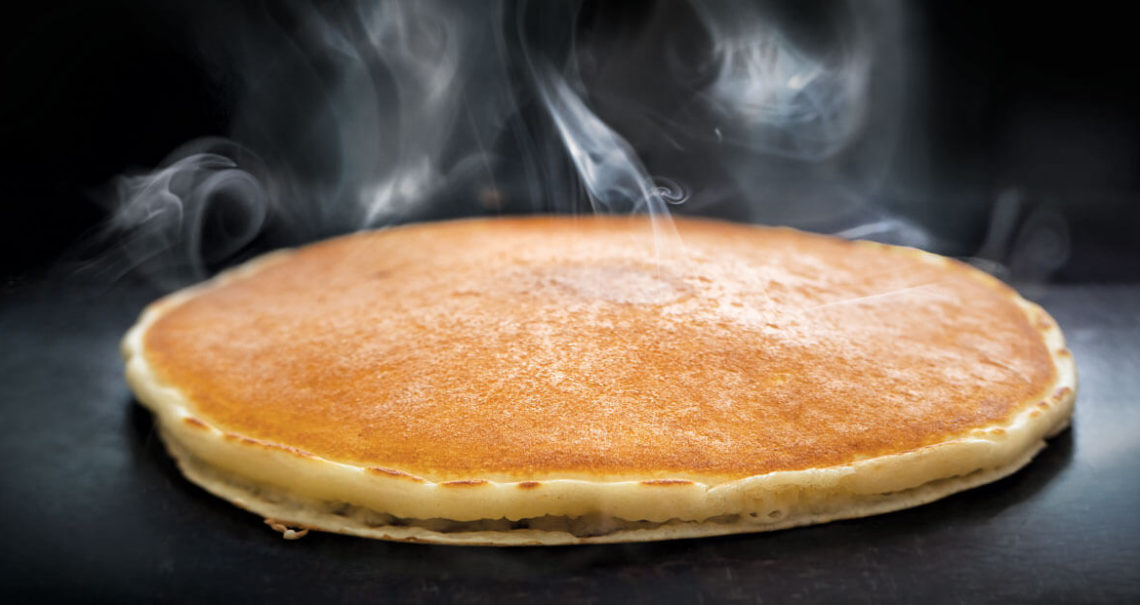 The line of people at the Asheboro Armory for Pancake Day stretches across the cold concrete floor of the building’s unheated lobby, through a second door, and into a cavernous hall that’s reminiscent of a 1960s-era high school gym. Think cinder-block walls and a high ceiling, but no bleachers. Fortunately, the queue moves at a good pace.

Another line of people files through a back door. The two lines meet, and everyone marches down the middle of the armory toward an assembly line of flapjack flippers — aproned men with spatulas standing behind a row of portable griddles, pouring batter and turning pancakes.

John Matkins, a retired Asheboro dentist, mans one of the griddles. He’s one of a dozen volunteer pancake flippers and has been a Kiwanian for nearly 50 years. His first Pancake Day was in 1971, so he’s something of an expert. Matkins explains that the first few early-morning pancakes always burn or stick to the griddle. After the griddle heats up a bit, he waits until bubbles appear in the batter and then flips them. Presto, picture-perfect pancakes.

“The trick is getting ’em loose and getting up underneath ’em,” he says, “and then a roll of the wrist. It’s all in the wrist.”

Members of the Asheboro Kiwanis Club serve thousands of people on Pancake Day. “In a town of 26,000 people,” Kiwanian Eddie Burks says, “if 5,000 people come out to eat, you’re going to see someone you know.” But the day that’s circled on the calendars of so many folks in and from Randolph County is about more than all-you-can-eat pancakes. “It’s about friendship, fellowship,” Matkins says. “A lot of people from my era, they’ll come back home when it’s Pancake Day. You’ll see people a lot of times that you haven’t seen in a year.” 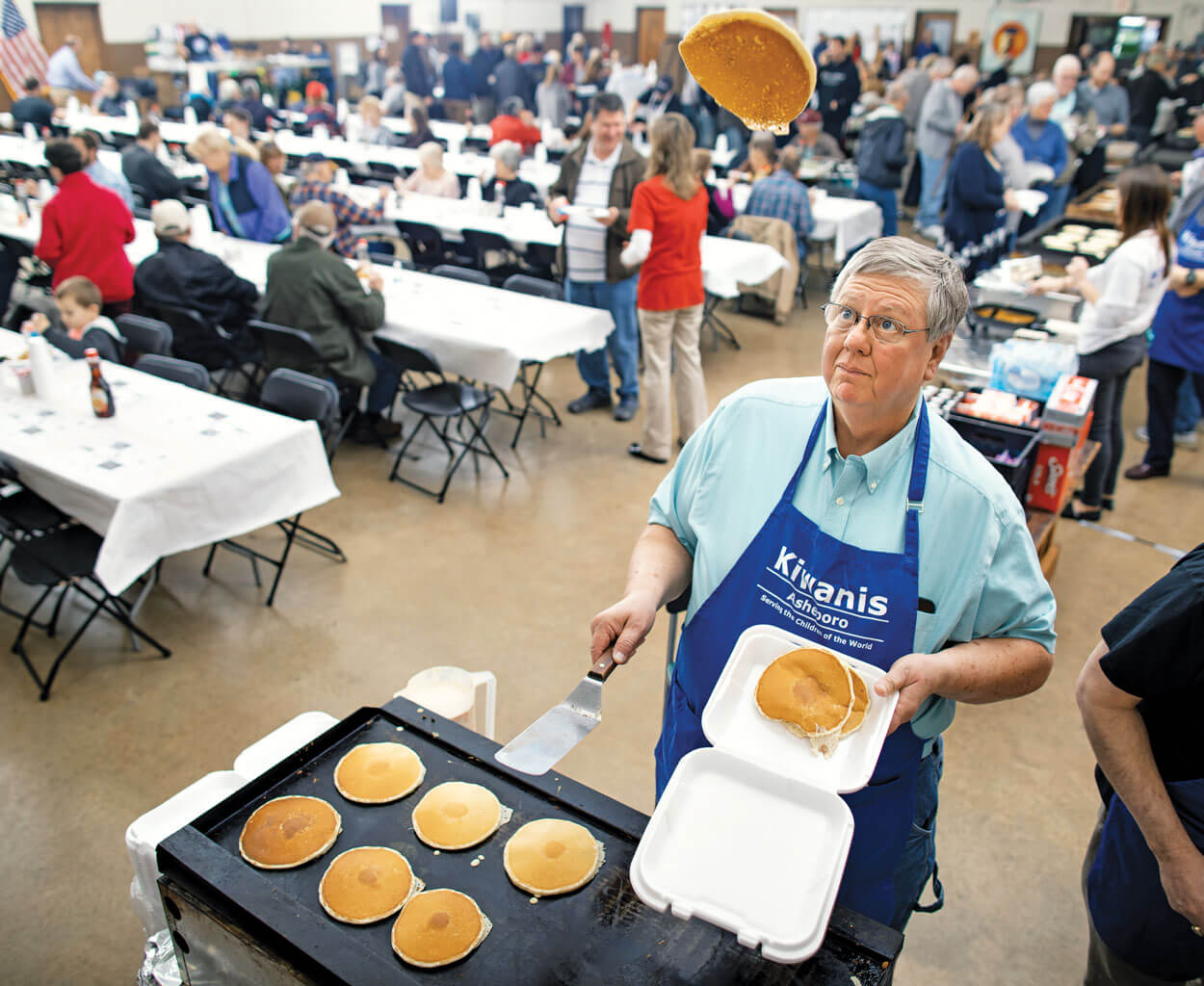 At row after row of long, narrow tables that fill the room, hundreds of locals, and former locals, eat pancakes and catch up with one another. The conversations become a jumbled cacophony, background noise over which a lone voice calls out numbers for door prizes donated by area businesses.

Patsy Kidd is lucky enough to win one of the most coveted of the giveaways: three packs of Energizer batteries. She’s at Pancake Day with her husband, Monroe, and their friends Carolyn and Roger Robbins. “You see a lot of people you don’t normally see,” Patsy says. “And sometimes you win a prize!”

A few tables over, George Turner sits with his grandchildren, Eliza and Kenan. “I like to make pancakes,” he says. “But I’ll be honest, these are bigger than what I make.” Eliza, 8, finishes long before her 6-year-old brother. His pancakes — he likes them with a hint of syrup and no butter — are cut into tidy little rectangles. “I’m a slow eater,” Kenan says, eyes locked on his plate.

On the far side of the room, Amanda Hartig, who grew up in Asheboro, sits with her husband, Ryan, and their children, Violet, 7, and Oliver, 5. They’ve come from Savannah, Georgia. This isn’t the first time she’s traveled a long way for Pancake Day. “My dad used to call me when I lived in Indiana and say, ‘It’s Pancake Day; you need to come,’” she says.

“It’s like nothing I’ve ever seen, really,” Ryan says. “I didn’t know there were that many people in Asheboro.”

The annual event began in the 1940s. Kiwanian Russell Walker, a former state senator and one of the founders of Asheboro-based Food Line supermarkets, was inspired by a cooking demonstration in one of his stores by Quaker Oats, the makers of Aunt Jemima pancake mix. In 1949, Quaker Oats provided the flour for the first pancake supper at the Kiwanis Club’s Teen Center on Salisbury Street. In later years, the Dainty Biscuit mill in Franklinville supplied the flour, and some of the mill women helped mix batter.

“Sometimes, when an old machine works so well, you don’t want to mess it up.”

By 1966, the club needed more room, so Kiwanians set up at the Masonic Temple on Sunset Avenue. They moved to the armory in 1973, primarily for more space and parking. To meet demand, Kiwanians added breakfast hours in 1974, lunch hours in 1995, and, somewhere along the way, drive-through service. These days, the club raises $20,000 to $25,000 with a menu of just sausage and pancakes.

The ingredients for the pancakes are simple — flour, milk, oil, and eggs — but what makes the day exceptional is the veteran corps of volunteers who turn out year after year to raise money for local organizations. From the batter mixers to the ticket takers to the sausage fryers, all told, there are about 100 Kiwanians and spouses, and twice that many community volunteers, who help Pancake Day run without a hitch.

Even though there are scores of people behind the scenes, Chelsie Embler, the 2019 Pancake Day chairwoman, says that the job isn’t as daunting as it sounds. Everyone, save a few newbies every year, knows exactly what they need to do. “Sometimes, when an old machine works so well, you don’t want to mess it up,” she says.

For his shift at the griddle, Asheboro attorney Ricky Cox likes to put on a show. When he flips pancakes, they fly high into the air — much to the amusement and amazement of the kids in line — and then he effortlessly catches them with a practiced spatula. “It’s just to break the boredom,” Cox says. “When that’s all you do all day, you improvise. It’s a little bit of entertainment.” 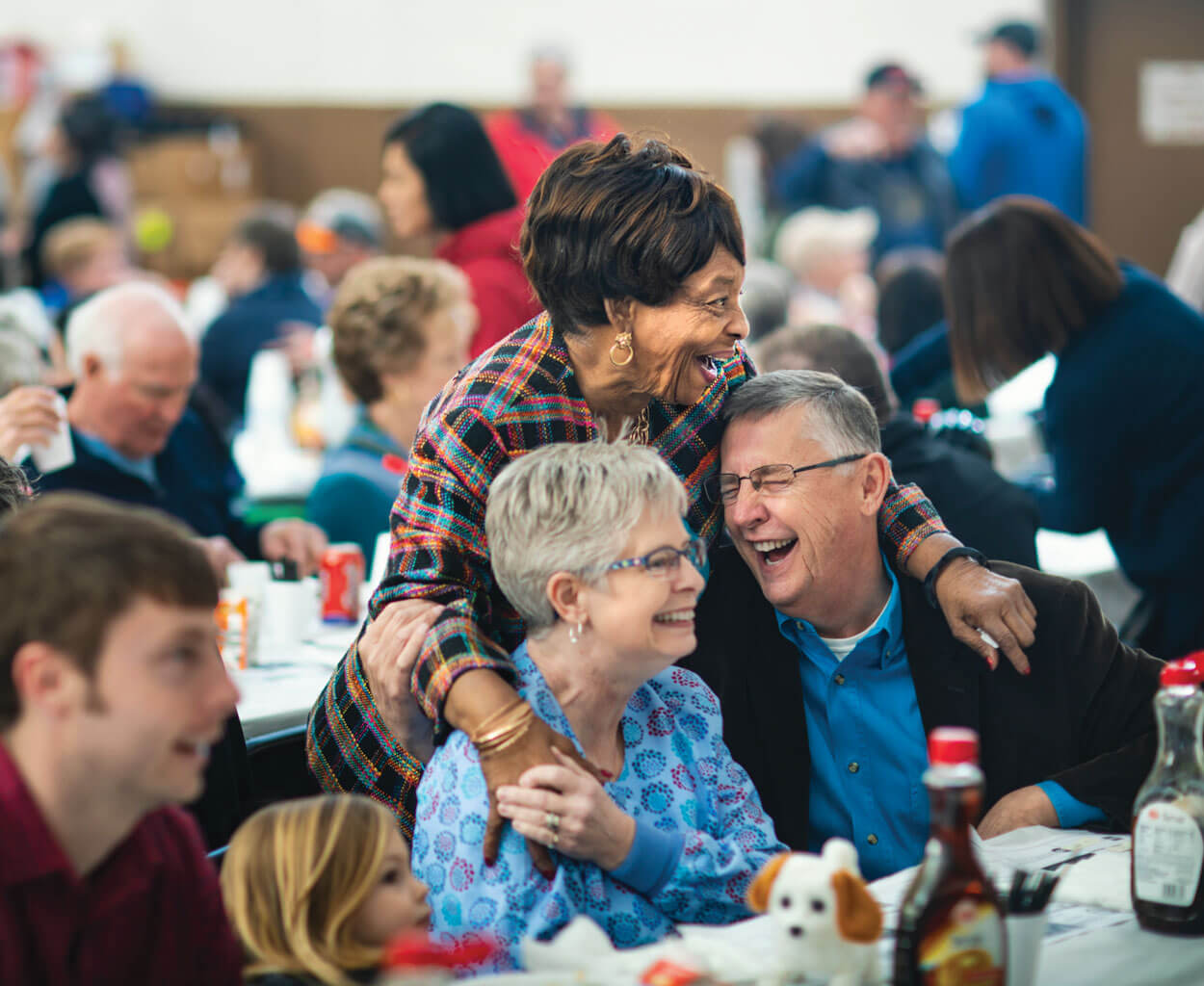 Next to eating pancakes, the best part of the day is socializing with friends. Asheboro Councilwoman Katie Snuggs makes a point to share a laugh with Mark and Marlene Dawalt.

Most Pancake Day attendees never see the “entertainment” served up by the sausage-making crew out in the parking lot on the south side of the building. Years ago, the sausage committee was a who’s who of Asheboro leaders: former mayors Clyde Lucas and Bob Reese, and legendary Asheboro High School football coach Lee J. Stone. They bought sausage in bulk and formed patties by hand.

Today’s sausage-makers cook Thomas Brothers pre-formed patties, but their Pancake Day still begins well before dawn. By day’s end, they will have prepared somewhere around 10,000 patties. They try to keep track of how many they cook, but it’s not easy. “If you ask us early, we’ll give you an exact count,” Ritchie Buffkin says. “If you ask us late, we’ll say a million.”

Harvey Wood claims he earned the job of co-head sausage-maker some 25 years ago when he was told to show up at 3 a.m. to start cooking. He arrived 15 minutes early, and he’s been the crew chief ever since. “We’re all dragging our wagon at the end of the day,” Wood says, “but we’ll talk about it for weeks, [how] we were out here helping somebody out. That’s what the Kiwanis Club is all about.”