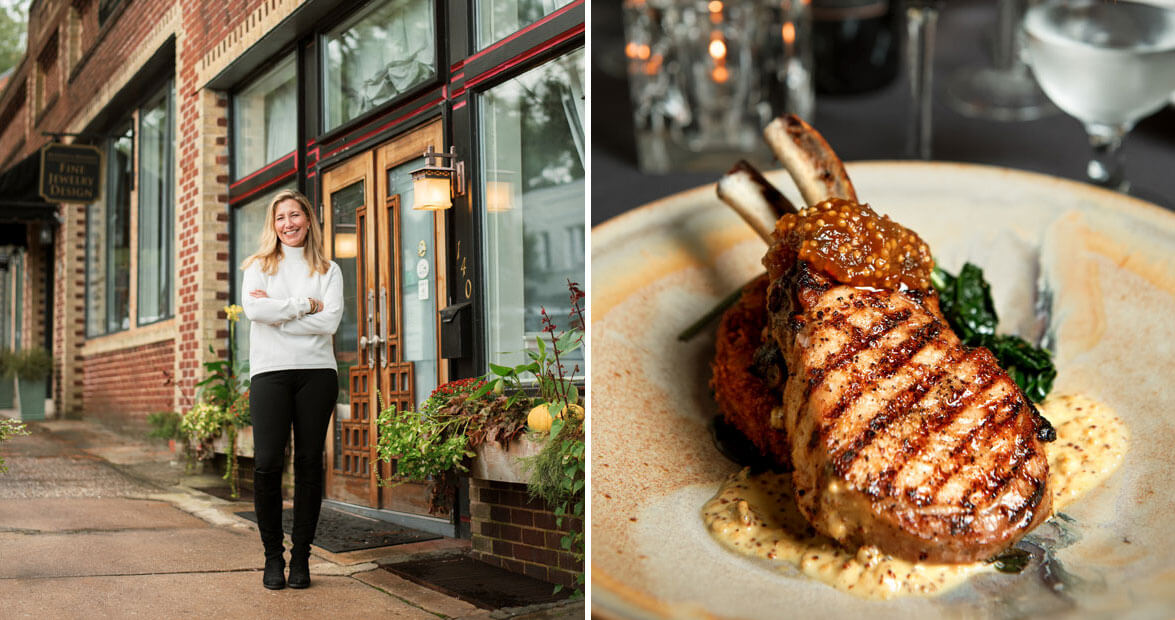 Because, sure, you can choose to dine in the front room at Ashten’s, where a huge, gilt-framed mirror reflects the muted, diamond-patterned walls and high, pressed-tin ceiling. Or you can pass the kitchen door, catch a glimpse of busy cooks and waiters, and head downstairs beneath a glittering chandelier.

But when there’s a chill in the air on sidewalks in Southern Pines, who wouldn’t head to Ashten’s Pub, a long galley with dark red walls, velvet-covered chairs with squishy pillows, dramatic pheasant feathers in vases, and low tables and trunks, all of it perfectly and dimly lit by candles and lamps with fabric or etched-glass shades, the better to make you look better? Whatever they’re eating downstairs — where there’s The Fox’s Den for a private dinner for eight or The Speakeasy for an event up to 32 — you can eat in the pub as well, at a table for two, or with your legs curled beneath you on a tufted, semicircular sofa for six. Framed paintings of hounds and horses are clustered above you, and stuffed foxes wearing hunting attire are perched on the fireplace mantel. It’s all too divine: some combination of salon, library, hunt club, and, well, proper pub, that manages to be comfortable, charming, and utterly … cozy. 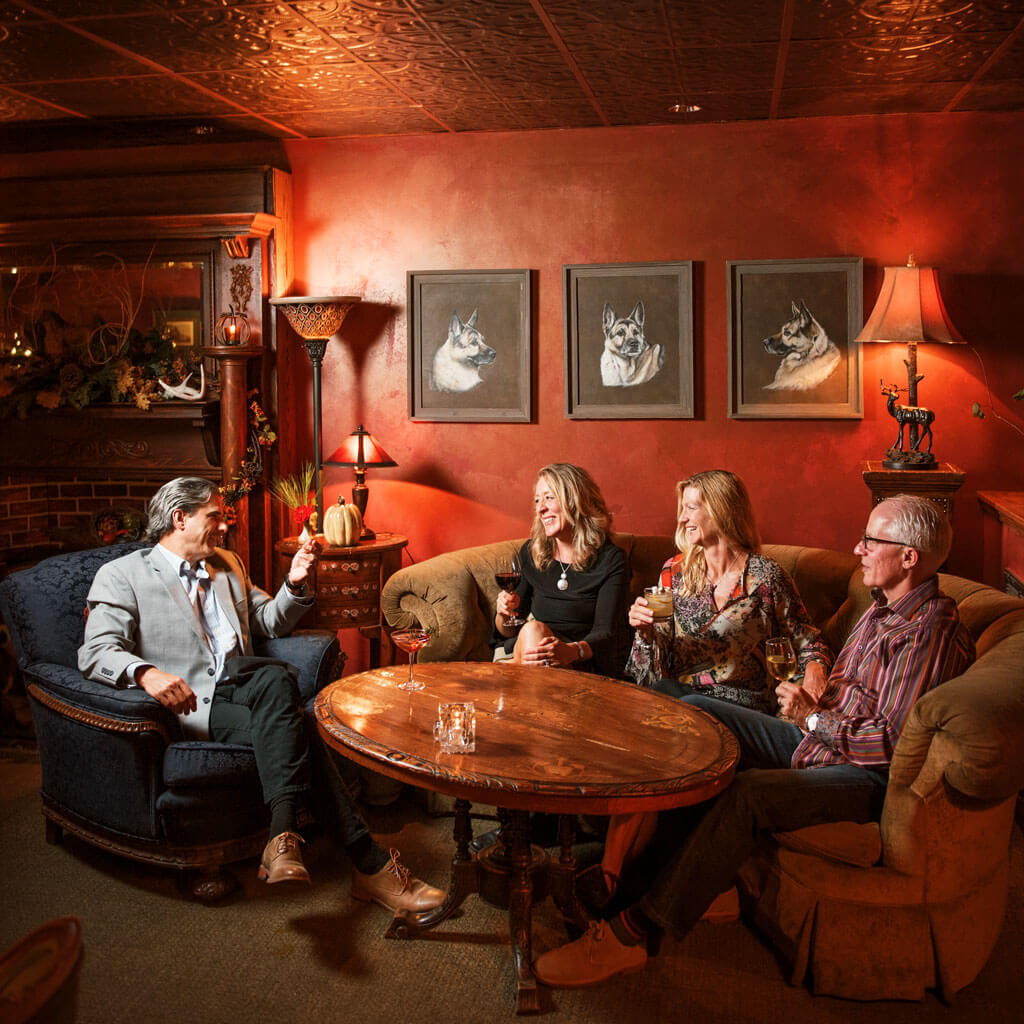 What the locals know: With its cozy atmosphere, Ashten’s pub is the place to be, especially during the holidays. photograph by Faith Teasley

Now let’s talk cocktails. Because Ashten’s has not one, not two, but three beverage menus — one each for beers, wines, and specialty cocktails. The best bars have signature drinks with names that amuse the peruser, and Ashten’s doesn’t fail, with its Cointreaul Yourself (including an absinthe rinse, so control yourself). “Spirits” get their own provenance, from Snow Hill and Manteo (Covington Vodka and Kill Devil Pecan Rum), to Conover and Charlotte (Seventeen Twelve Bourbon and Seven Jars’ Preamble Rye). This is Ashten’s, after all, where North Carolina ingredients take center stage. 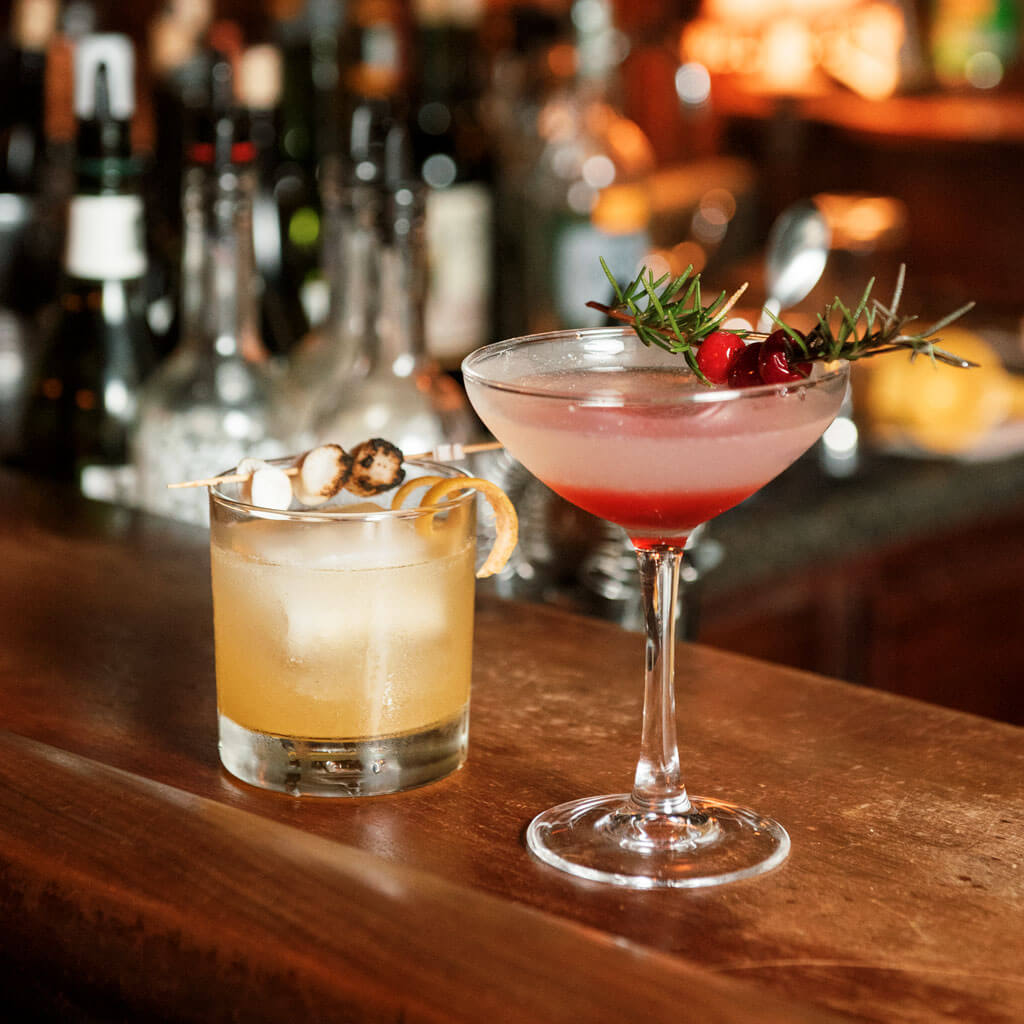 Festive cocktails are the perfect addition to an evening out around the holidays. photograph by Faith Teasley

For 21 years now, before “local” gained a name, much less a movement, Ashten’s has been sourcing its menu ingredients from area farms. When Southern Pines natives Ashley Van Camp and her sister Quinten — hence the name — opened their restaurant in 1997, their goal was the best-tasting of whatever they served, from as nearby as they could get it. The pair got in the car, drove around, and quite literally asked people with farms, “What do you grow?” The sisters pulled out price lists from “the big guys” and explained that while they couldn’t pay double, they would pay more because, as Ashley puts it, “A, yours are better, and B, yours are going to last longer.”

Those same farmers, including Macc’s Family Farm and Green Haven Plant Farm, both in Carthage; Brown Creek Creamery in Wadesboro; and Conscious Cultivators in Southern Pines, are still delivering cheeses, honeys, meats, fruits, vegetables, and lettuces to Ashten’s. Rather than a “Hall of Fame,” a blackboard “Hall of Farms” lists the provision providers, and when a waiter describes the specials, he’ll also tell you the venue of the vegetables, so to speak. Knowing that the wheat berries in the puree beneath your barrel fish hail from South Carolina’s Anson Mills, or that the kale beside your sumac-dusted fingerling potatoes grew at Carthage’s Priest Farm, makes an entrée special as well as delicious. Even chefs de cuisine Matt Hannon and Josh Donovan get in on the action. Matt is a forager, and the chanterelle mushrooms that he and his children gathered in late summer were folded and molded into butter logs to melt atop your Hilltop Angus steak.

“Our menu really depends on what comes up the back steps” of this 1898 building, Ashley says. Quinten has since moved to Australia, but Ashten’s remains dedicated to Southern-inspired dishes based on the Italian word scorpacciata, which translates to “big feed” but more broadly means a commitment to eating large quantities of what’s in season before it disappears. “Specials aren’t sustainable,” Ashley says, so in the spring, asparagus is served in everything from soup to strudel and then vanishes from the menu, which changes frequently and states outright that offerings vary “according to the weather and the whims of the farmers and the cooks.”

Thankfully, though, North Carolina’s own Cheerwine knows no season, so the soda is a staple at Ashten’s. It pops up in inventions like Cheerwine beurre blanc, which has the texture of syrup and the hue of Texas Pete. You can drizzle it over your fish or duck, or on Clara Mae’s biscuits, which come with every meal. Clara Mae was Ashley’s grandmother, who probably never envisioned her biscuits — two-bite, crumbly delicacies — being accompanied by a mixture of raw molasses, butter, and lava salt.

Artichoke pops. Reuben egg rolls. Portobello fries. Inventive but not peculiar, unexpected yet logical, Ashten’s is thoroughly Southern and wholly local. Settle in on a sofa, let the low burble of voices from the bar drift past, and while away a wintry dusk.