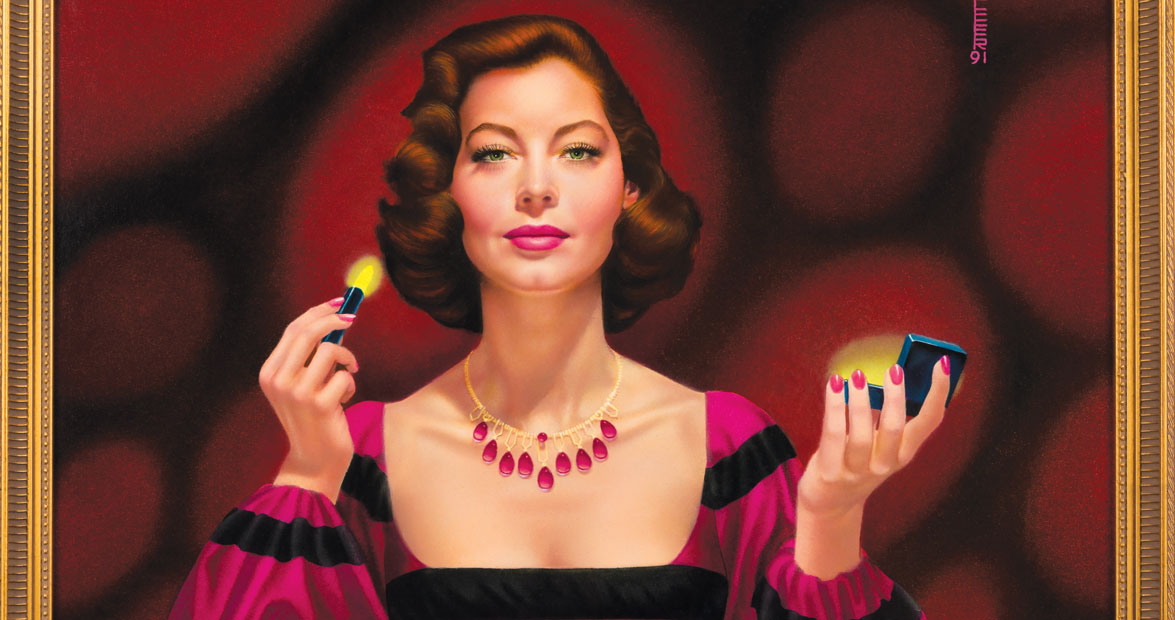 EDITOR’S NOTE: This story was originally published in the March 2014 issue of Our State.

She’s looking at me. Our eyes lock. Those eyes, those exotic, made-for-stardom eyes — the way they slit lustily for the lens, the way they’re crowned by devilishly perfect brows — can do strange things to a mere mortal man. They’re mesmerizing, penetrating, wounding. They could well be sizing you up and saying, “Go ahead, big guy, I dare you to make a move.”

And would you just look at that black satin dress? A single strap runs a course from mid-bosom northward over a well-defined collarbone, slinging around neck and nape, and on down the sheer expanse of bare back. Such a tease. It’s as if the whole getup keeps from getting loose because of that single strap. That little black dress looks shrink-wrapped around her 19-inch waist.

Omigosh, am I blushing?

Cool down, big guy, it’s only a photograph, a black-and-white portrait taken in an era when Technicolor was still high tech. And the woman with that drop-dead-gorgeous gaze has been dead nearly as long as Taylor Swift has been alive. Then it hits me: How did Mickey Rooney, all 5 feet 2 inches of him, end up with her?

The word “beautiful” isn’t bold enough to encompass Ava Gardner. To say Ava Gardner was beautiful is to say Frank Sinatra had a nice voice or Picasso did a pretty good job with oils. No, Ava Gardner went beyond beautiful into the realm of grandeur, or, as People magazine proclaimed after her death in 1990, she was the “last goddess.” And to think those exotic, made-for-stardom eyes were made down-home, here in Grabtown (now there’s a glamorous name), where tobacco grows and the horizon is no higher than the tallest loblolly pine. 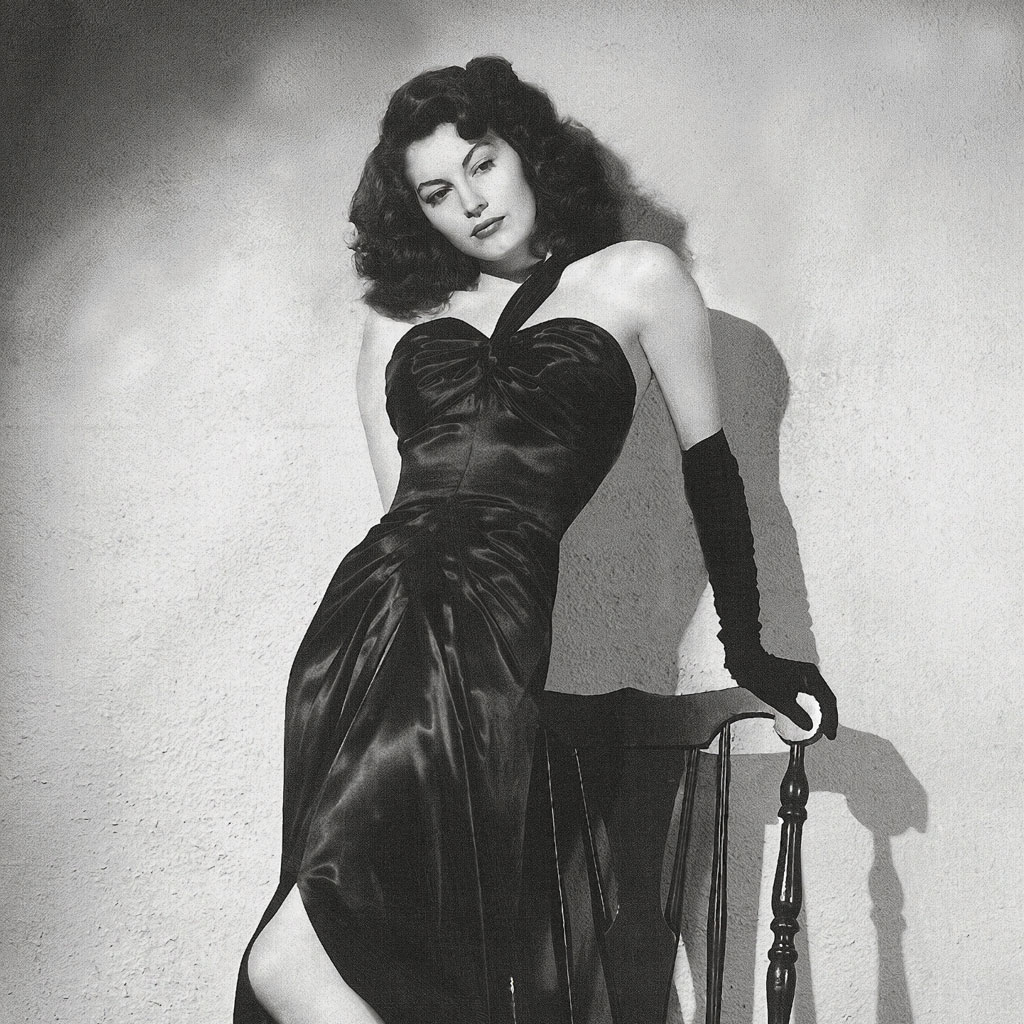 Ava Gardner’s waist was usually 19 inches in films such as The Killers (left). But for other movies, she dieted and laid off fried chicken (reportedly one of her favorite foods) to shrink to an impossibly tiny 18 inches. photograph by Ava Gardner Museum

The shining star the world knows as Ava Lavinia Gardner had a holiday beginning, born Christmas Eve 1922, the youngest of seven children. As sparkly as her life would become, it had a most spartan start. Her father, Jonas Gardner, was a hard-up tenant farmer. Ava’s girlhood home is about eight miles southeast of Smithfield; the two-story farmhouse where she was born and spent the first two years of her life still stands, and is still lived in, at the corner of Grabtown and Avenue roads. The view from the porch is much the same, too: farm fields flecked with flue-cured tobacco barns and edged by piney woods. When fire destroyed the family’s barn and cotton gin, the Gardners moved to the nearby “teacherage,”  a boarding home for women teachers at the local Brogden School, where Ava’s mom worked as a cook and housekeeper. Her father, stripped of his farm property, later died of bronchitis when Ava was 15 years old.

As a teenager, Ava was quite the head-turner, especially on those summer days at Holts Lake when swim attire accentuated her physique. Mokie Stancil, who’s 93 and lives in Selma, remembers those days. He’ll admit he might have felt a pang of covetousness when a buddy of his, the son of the Johnston County sheriff, began dating this farm-girl knockout. But Stancil was ever the gentleman — “I didn’t want to make my girlfriend jealous” — and instead joined the couple on double dates. “I had a nice time,” he says, his advanced years and retreating health keeping his answers short and understated. “She was a fun girl. She was beautiful.”

At 17, Ava took the train to New York City to visit her older sister, Beatrice, who was 19 years her senior and married to a professional photographer named Larry Tarr. Tarr clicked off glamour shots of his sister-in-law and displayed them in his studio window. A moon-eyed passerby, who wanted a date with that teen angel in the window, suggested sending the shots to the MGM film studios. Tarr figured, why not? Ava might have been content to carry on with secretarial classes back home in North Carolina, get married, raise a family, and cook great fried chicken like her mother did, but MGM saw an exquisiteness that begged to be in pictures. The talent scouts called her back up to the big city for an interview and screen test.

Ava’s mother had her misgivings, as any mother would, but the baby of the family went out for her big audition. Her Southern drawl was thicker than Clark Gable’s hair tonic. Nobody could much understand her, and, bless her heart, she was just plain awkward on screen. Acting? Well … it needed work. But, man, was this woman a stunner! And those eyes, those mesmerizing, penetrating, wounding eyes, they laser-beamed through every soul in the room — a “flash of hypnotic fire,” in the words of Gardner biographer Lee Server.

So she was offered a studio contract — a contract! — and, in 1941, when she was only 18 years old, she headed out to California — California! — chaperoned, at her mother’s insistence, by her oldest sister. The movie people coached her, groomed her, and tried to cleanse her of her Carolina cadence. 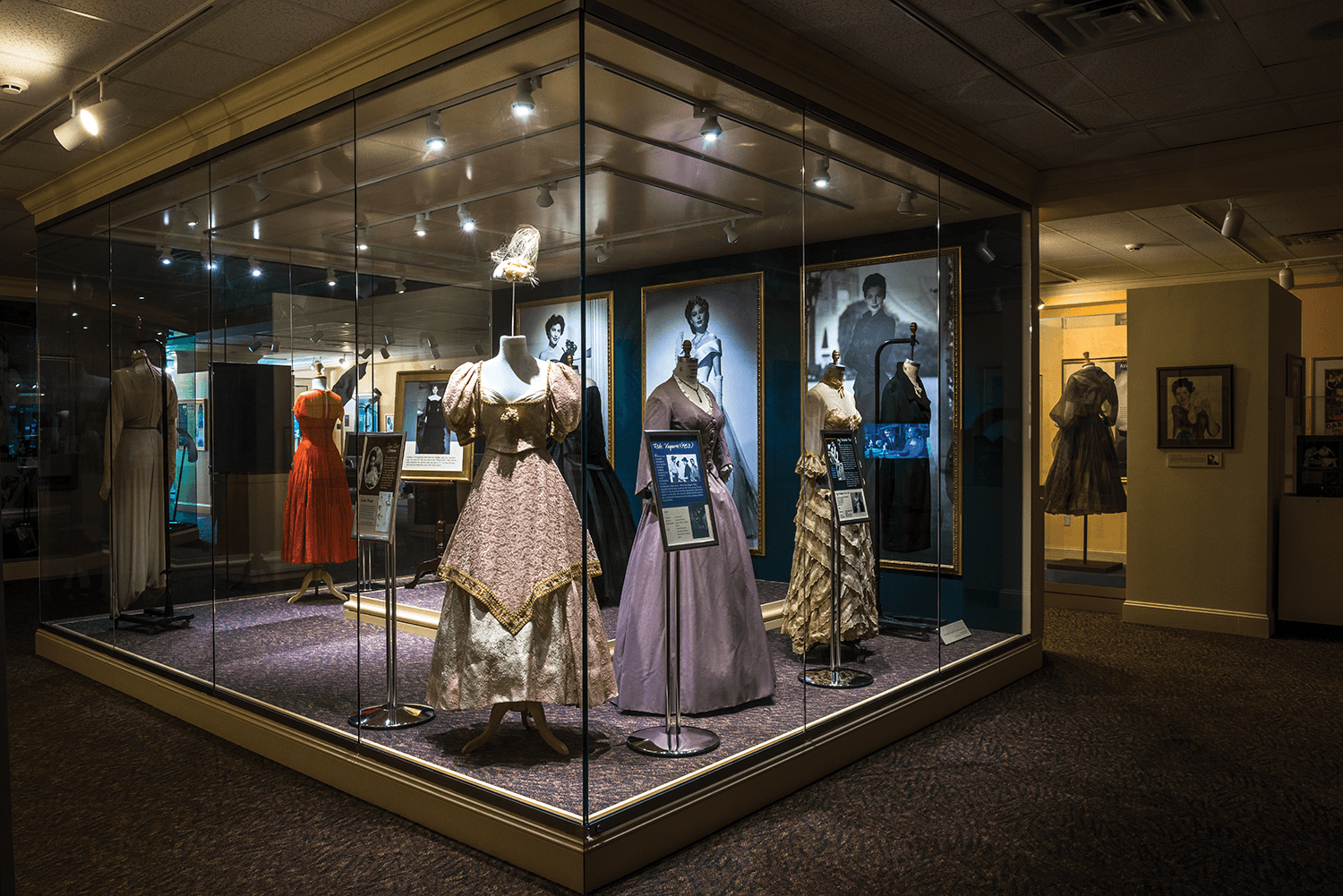 A collection of gowns Ava wore in films — as well as a dress Howard Hughes gave her — is on view at the Ava Gardner Museum in Smithfield. photograph by Emily Chaplin

Then came two more Hollywood marriages — to band leader Artie Shaw (she was wife No. 5 out of 8), and to crooner Frank Sinatra — only to end in two more Hollywood divorces. She called Sinatra the love of her life, despite their unholy matrimony of cheating, fighting, and much martini drinking. It’s all documented in Ava Gardner: The Secret Conversations, a collection of her verbatim reminiscences to ghostwriter Peter Evans. The book, released in 2013 after Evans’s death, will strike some as a titillating case of TMI. She was the very embodiment of femme fatale: mysterious, dangerous, brutally blunt, irresistible. Men, regardless of their money and might, pursued her at their own peril. Consider the intense courting from eccentric billionaire Howard Hughes. The two never married, but she ended up smashing a marble ashtray on his head in one famous fight, knocking him flat out and nearly killing him.

Despite her love-hate relationships with some of the most famous men of the 20th century, Hollywood would have a long, prosperous marriage to Ava Gardner. The camera loved her unconditionally, and by extension, America loved her. After her breakthrough 1946 movie, The Killers, she became a box office go-to girl. She was in pin-ups. She was on the cover of Time. She was in movies with the biggest hunks in Hollywood. Clark Gable. Gregory Peck. Burt Lancaster. Cary Grant. Humphrey Bogart. Not bad for a girl who grew up eating her mother’s fried chicken and saying “y’all” down on Grabtown Road.

Of course, she came back to Smithfield every now and again, for Christmas and family get-togethers. Mary Edna Grantham, Gardner’s 78-year-old niece who lives in Smithfield, says Aunt Ava never made a big fuss about her life in the limelight. Why, she never even wanted to put on lipstick when she was home, and she certainly didn’t want to dress up. “She was never in front of the mirror primping,” Grantham recalls. “To sum her up, when she was around family, she was family. That’s it.” And the young niece claims she was never all that googly-eyed by her famous aunt, though “I wanted to get in some of those bags, I’ll tell you that.”

Grantham watched Aunt Ava’s movies, though she could never just watch Aunt Ava’s movies. “I was a little ill at ease watching them,” she says. “It’s like a parent watching a child at a recital, that same feeling.” And the scandals? The press? That amorous-looking photo with Sammy Davis Jr.? Even before “Entertainment Tonight” and TMZ, the cringe-inducing tales could travel fast to the folks back home. “And all this ugly talk and chat that went on …” Her voice trails off before closing this conversation topic with resolve: “She didn’t learn that around here, I’ll tell you that.”

The woman of flawless physical beauty had her high-profile flaws, yes, but she will always be a point of pride for Smithfield. Here on East Market Street, next to the library and across from Town Hall, is the Ava Gardner Museum, which opened in its current location in 2000 and draws some 12,000 visitors each year. Here, greeting you at the front door, is the photo of Ava in that single-strapped black satin dress. Walk through the gallery and read about the “great old pal” she had in Gregory Peck. Look at the jacket she wore in The Great Sinner. See the watch she gave Frank Sinatra. Watch an 18-minute documentary featuring reflections from none other than Mickey Rooney.

Go on to the back of the museum, into the Tom Banks Library, and again you meet her gaze — not in the form of photos, but in paintings. Vivid, fanciful, dreamy, weird paintings. More than a dozen of them adorn the walls in this room, all the works of artist Bert Pfeiffer. The Dutchman was starstruck after seeing Ava in the 1948 movie One Touch of Venus. For the rest of his life, he painted his own interpretations of the star’s likeness: Ava with neon lipstick. Ava wearing a hoop dress. Ava with a mouse on her sleeve. Ava with a banner-towing plane overhead. Pfeiffer was an odd fellow, but his paintings, like his subject, mesmerize. Ava personally chose three of them to hang in her home in London, where she fled to escape the media gossip and glare. 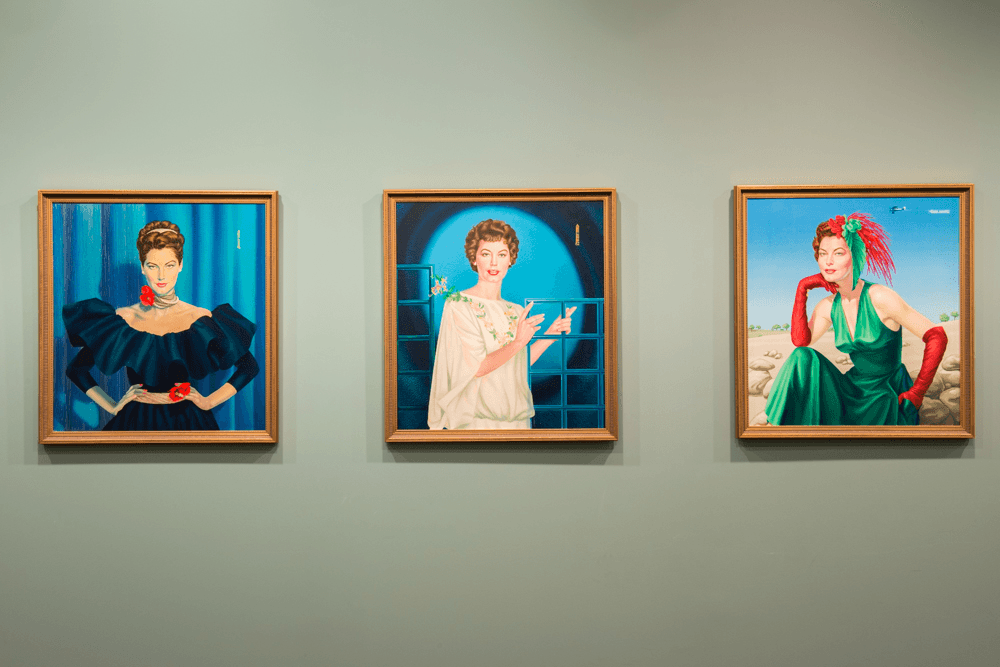 Ava’s beauty captured everyone, especially artist Bert Pfeiffer. After first seeing Ava star in One Touch of Venus, Pfeiffer spent the rest of his life memorizing her features from photographs and painting portraits (on display at the Ava Gardner Museum in Smithfield) of the beauty.  photograph by Emily Chaplin

It was in London where the shining star the world knew as Ava Lavinia Gardner withered up and flickered out. After a lifetime of smoking and hard living, she suffered from emphysema and, in 1986, suffered two strokes that left her paralyzed and bedridden. On January 25, 1990, terribly weakened by pneumonia, she died at the age of 67.

While in Smithfield, I pay a visit to her grave at Sunset Memorial Park, where she lies with her parents and siblings beyond the shade of a large magnolia tree. A simple marker, no higher than the grass and clover, gives her name, the date of her birth, and the date of her death. Nothing else. Even the most beautiful and celebrated and vital lives eventually come to an end. She’s there, underfoot, a vase of white, plastic flowers atop the cold, gray stone. Looking long and hard at the marker, I can see those eyes.