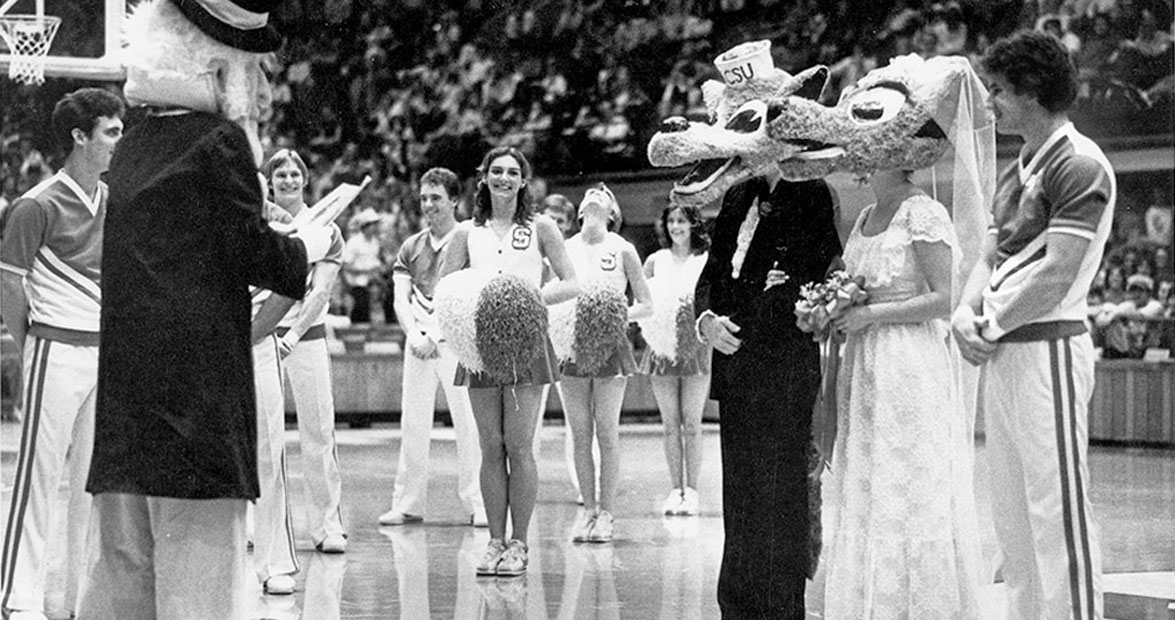 In the late 1970s, despite their titles of Mr. and Mrs. Wuf, North Carolina State University’s wolf mascots weren’t married. Not yet, anyway. The female mascot was dubbed Mrs. Wuf (“Wolf” didn’t fit on the jerseys) a few years after she was introduced with the new women’s athletic program in 1975, and in 1981, student mascot Chris Belton decided to make the title official. That February, before 11,800 witnesses, Mr. Wuf, portrayed by Belton, and Mrs. Wuf, played by student Susan C. Smith, were joined in “canis matrimonium” during halftime of a men’s basketball game against Wake Forest University.

The Wake Forest Demon Deacon mascot conducted the ceremony, NC State Chancellor Joab Thomas gave the bride away, and two wolf pups — 4-year-old Tricia Ann Cheeks and 5-year-old Chris Combs — participated (whether as flower girl and ring bearer or the Wufs’ own “pups” is uncertain). Since the mascots can’t speak, the ceremony consisted mainly of hand gestures, but it touched the hearts of NC State fans everywhere. In 2011, for their 30th anniversary, the Wufs renewed their vows before the Demon Deacon. If you look closely, you can see a big red ring glimmering on Mrs. Wuf’s finger, a symbol of eternal puppy love.