When one of the highlights of a girl’s summer camp experience is sitting in a chair, you have to wonder. But what if I told you the chair was a miniature, custom-made for Charles Stratton, aka Gen. Tom Thumb, the renowned 19th-century performer with dwarfism? Ahh, never could a girl feel so tall by flopping in a chair so small. 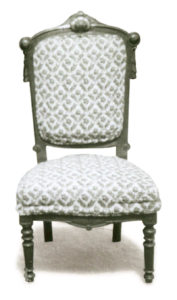 For decades, the kindergartner-size chair was a well-known attraction at Brevard’s popular Rockbrook Camp for Girls, thanks to the camp founder’s famous relative, P.T. Barnum. The legendary circus showman famously made Tom Thumb an international celebrity and was the great-grandfather of Nancy Clarke Carrier, who founded Rockbrook in 1921.

During the camp’s early years, campers often spoke of seeing various circus memorabilia in the Rockbrook house, but Thumb’s throne always got top billing. Countless young girls sat where Tom Thumb once did before the chair was passed on to a relative. Sarah Reed Carter, one of the camp’s current directors, says that photos of the chair look similar to a chair that’s owned by The Barnum Museum — it’s believed that they were part of a set.

This year, Rockbrook celebrates having given girls the opportunity to explore nature and learn new skills such as horseback riding, rock climbing, archery, canoeing, crafts, and performing arts for 100 years. Alas, the famous chair is now a mere footnote in the camp’s long history, a unique piece of trivial, um, hindsight.