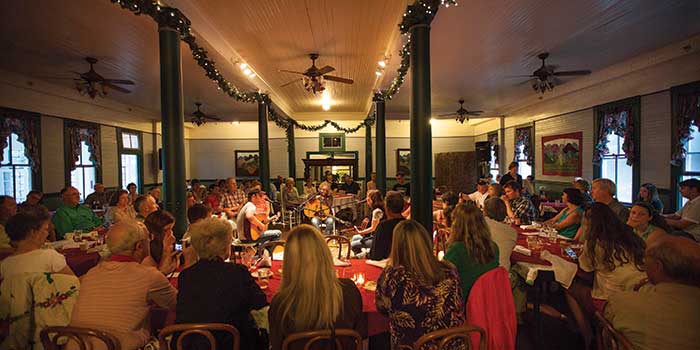 Almost 40 miles southwest of Asheville, the Balsam Mountain Inn is far from the bright lights of any big cities. But here, at this stately railroad hotel, you’ll find something the city can’t provide: quiet.

Not silence — quiet. In this 100-year-old wood structure, you hear squeaking floorboards, closing doors and transoms, and murmuring voices next door. But here’s what you don’t hear: telephones. Televisions. Alarm clocks. The white noise of modern life has no place at the Balsam.

Instead, you get older rhythms. The ones you can’t download. Wind on the Blue Ridge slopes. Boasting frogs. And, tonight, the sounds of three veteran songwriters seated in the middle of a packed dining hall, singing their life stories.

Wood Newton, Jamie Kyle, and Jim Sales are usually content to hear their songs performed by stars: Eddy Arnold, Charley Pride, Faith Hill, and Randy Travis have all recorded their tunes. But tonight, in the quiet of the Jackson County mountains, you can lean closer, hear the stories they tell without all the neon and fuss.

Like any good storyteller, Newton knows that sometimes heartbreak goes down better with a smile. “If you’re not careful,” his lyric warns a ladies’ man, “my wife’s gonna leave you.” An older married couple in the front row erupts with laughter. Kyle and Sales laugh, too.

During another song, Newton nods to Sales, who improvises a guitar solo while Kyle thumps along on the back of her acoustic guitar. Collaboration just springs up here; it doesn’t need to be planned.

Though innkeeper Merrily Teasley knows, even as she nods along, it wasn’t easy making it seem so easy.

First, there was the hotel itself. When Teasley bought it in 1990, the formerly grand structure was a long-neglected wreck. There were radiators to replace, walls to remove, plumbing to update, and architectural documents to wade through to earn a certificate of historic restoration. In 1991, the inn reopened to the public. Visitors slowly rediscovered the Balsam, drawn by views of the Blue Ridge and the solitude of the remote resort.

But Teasley knew something was missing: music.

Country music was always a part of Teasley’s life. As a girl growing up over the border in eastern Tennessee, she rushed home from school at lunchtime to listen to Eddy Arnold on the radio. She spent time in Nashville honky-tonks, soaking in the sounds and the atmosphere. She learned that the right setting can give artistic inspiration the nudge it needs.

Her hotel, she thought, might just be such a setting. It was natural to bring the music she loved to the place she’d poured her heart into. So in 1996, Teasley started a songwriter series modeled on the legendary concerts at the Bluebird Cafe in Nashville, where audiences cozy up to top-tier songwriters in a similarly intimate space.

She got some help from an ex-U.S. Air Force sergeant named Betty Jones. Jones lives next door to the hotel and once clogged at the Grand Ole Opry. Her obsession with country music matches Teasley’s, and her volunteer efforts to promote the series proved crucial to its survival when, after 13 years of filling the hotel with song and guests, Teasley sold the inn and retired to Florida. After Teasley’s departure, Jones watched over the monthly songwriter nights with fierce devotion, even as she maintained her day job at an outpatient psychiatric clinic.

Thanks to Jones’s care, the music nights survived Teasley’s absence. But in the meantime, the hotel wasn’t faring as well. On return visits, Teasley saw that things were slipping. Finally, in 2011, she decided to take back the helm.

“This place and this beautiful old building mean so much to me,” she says. “They are so much a part of my life.”

She came back out of necessity, but the Balsam has a way of bringing people back to it, no matter the circumstances.

When Teasley first started the songwriter circle at the Balsam, she wasn’t sure if musicians would make the trek to this tiny dot on the map, or if the audiences would follow.

But she needn’t have worried. Most shows sell out early. And for the musicians, the Balsam has an irresistible lure. Take Wood Newton: He played one of the hotel’s first concerts, and he’s been back dozens of times since.

“This is my first time here,” Jim Sales confides, “but I’ve been hearing about it for years.” He looks around the carefully restored dining hall, with its rows of grand columns and high ceiling, and lets out a soft whistle.

The musicians come not only for the concerts but also for the hospitality. They come a day early and stay late, using the quiet of the mountains to get in some songwriting between meals. The Balsam is as much a retreat for them as it is for visitors.

Back in the sold-out dining hall, Sales is playing “You Don’t Know Country,” a crowd-pleaser that name-drops Hank Williams, Willie Nelson, and Johnny Cash, celebrating the genre’s long tradition of storytellers. “If you never rode with Luke the Drifter,” he drawls, “you don’t know country.” Over at her table, Teasley closes her eyes and smiles. For once, there’s nothing for her to do but sit back and listen.

For upcoming shows and to purchase tickets, visit balsammountaininn.net.

Django Haskins is an author and songwriter in Durham. Find more of his archived stories here.