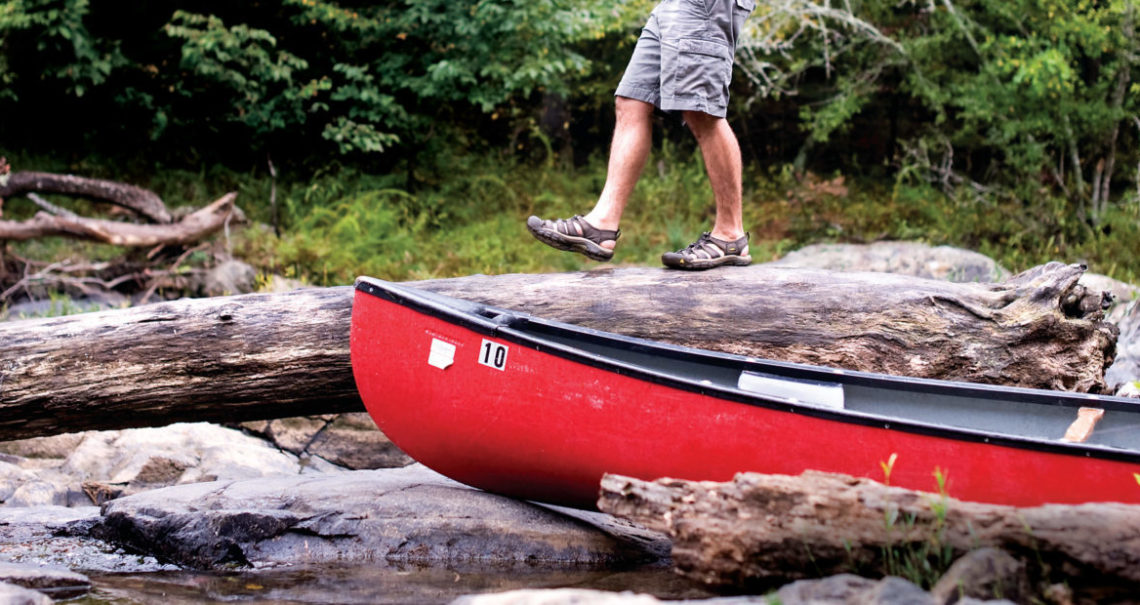 Banks Dixon’s red pickup pulls out of his driveway. Green, red, and yellow kayaks and canoes rattle on the rack rising out of the bed. Leaves wash out of the cargo’s creases as he picks up speed, heading north on Durham’s Roxboro Road.

It’s mid-morning, and traffic moves easily enough. He glides through traffic lights, spaced every other block or so. Drivers in the opposite lanes aren’t as lucky; they’re collecting in long lines behind road crews that are laying down strips of steaming asphalt.

Dixon drives this route often, working his way past the city clutter. Past Wachovia and Staples, drugstores and one intersection with gas stations on three of its corners. He’s traveling a little more than three miles up the road from his house; some days, the trip takes him 20 minutes. (Story continues below the video.)

Slowing down just past an office building and strip mall, he signals a left turn and pulls into West Point on the Eno Park. Dixon, 36 years old, is in his sanctuary, a patch of largely undisturbed earth, maybe not entirely pristine but still natural enough to harbor the kind of peacefulness you find only where mankind’s enterprising hands have been restrained.

He walks to the water’s edge, flips over the canoe that he got from the stand of boats he keeps by the river, and slides it into the water. As usual, he’s smiling. He loves being outdoors. You see this as he tells a story about barred owls, so numerous along the Roanoke River that their back-and-forth calls make for sleepless camping trips. He drops his voice into a dramatic narrator caricature as he goes on about the “majesty” of it all. And he laughs, a little embarrassed. He knows he’s getting sappy. So be it. He’s content.

We climb into the canoe and, with a few short strokes, slip into a world apart from the urgency of the Triangle’s urban rush. As we shove off, the water spilling over the West Point Mill dam muffles the highway whoosh. The Eno, slow-moving and murky, narrows as we move upstream. Hardwoods, with tufts of russet and gold still brushing against the sky, rise up beyond the banks. The sun, having climbed above the crowns of those hardwoods, warms our faces in between cool breezes. With each dip of the paddle, the city noises fade behind the rumble of water falling over the spillway. Then even that low hum recedes. Finally, there’s only the birds, and the occasional clunk of a paddle against the side of the boat. And soon, even that break in the peace is under control.

Dixon has spent most of his life trying to get to this spot. Not this particular spot necessarily, but ones just like it. Spaces, either on a trail or now most likely on the water, where everything but unaltered earth and the person he is at his core falls away.

“You’re back to your roots,” says Dixon, a lean figure whose paddle slips silently into and out of the water. He guides the boat around trees leaning straight out from the banks and toward the first bend. “Out here, I’m able to breathe in and feel that life is what it is. And it’s not as difficult as any of us might want to make it.”

For the past five years, Dixon has made his living helping others get to this spot. He’s a river guide, owner of Frog Hollow Outdoors in Durham, a man passionate about staying connected to nature and helping others do the same.

Thousands of miles of rivers course across North Carolina. Some crash over rocks and through gorges in a remote mountain wilderness, while others stir imperceptibly through unpopulated swamps and flatlands on their way to the sea. Dixon organizes trips on both ends of the spectrum. But he also champions our state’s more developed areas. Like the Triangle, where the last bit of wilderness tends to linger along the rivers. To him, few tasks are more satisfying than taking people out on the waters that they drive by and cross over and ignore on a daily basis.

“I constantly have folks who are surprised. They’re like, ‘Wow! This is right in my backyard?’” he says.

The Triangle’s “backyard” sits primarily in two river basins — the Neuse and the Cape Fear. And several smaller rivers snake their way toward these main branches. There’s the Eno, the Flat River, the Haw, and the Deep. You just have to know where to get on them and when there’s enough water to keep the trip interesting. That’s where having a guide who’s been navigating Piedmont waterways since he was a teenager comes in handy.

When he was younger, Dixon never saw himself settling in Durham. Maybe it was the restlessness of youth, but he had the notion he’d be happier elsewhere, likely in places with sprawling expanses of untamed land. But his roots hold him fast. And he’s become an expert on the pockets of nature not too far from his own front door. In his pre-Frog Hollow days, free time would find him scooting out for quick passes on nearby waterways.

The rain was still falling one night several years ago when he called a co-worker at Durham’s Great Outdoor Provision Company: “Hey, I know the Flat’s going to be running tomorrow. Do you want to go out?”
They were both on the schedule to open the store at 10 the next morning. But, like most Piedmont rivers, the Flat, just above Durham’s Lake Mickey, promises white water only occasionally — right after a good rain.

The eastern sky was barely hinting at a sunrise when Dixon and his friend carried their boats to the shore at 5 a.m. But they could see what they were hoping for: The water was high, churning up the rapids they craved. They jumped in and careened from eddy to swirl. And as Dixon headed toward the last bubbling ridge, an old breached dam, right there nudged up against Durham’s urban edges, he spotted a bobcat. He watched it for several minutes before it picked up his scent and bounded off into the woods.

“I figured I’d be in the mountains or in the Sierras when I saw a bobcat,” he says. “And there I was 25 minutes from home, up on the Flat River. That was a phenomenal experience for me.” It’s an experience he works hard to duplicate for others.

Originally, Dixon only rented boats. He was working full time for the Triangle Land Conservancy (TLC), monitoring protected properties and looking for ways to help people enjoy and appreciate the land under the conservancy’s wing. After working all day, he’d come home to an answering machine full of boat requests. He’d get on the phone and start making arrangements to drop off boats the next morning before heading back to work.

Eventually, the demand for his guide services led him to start scaling back his hours at TLC until, in 2005, he went out on his own. Now, Dixon and his crew devote full days to organizing and leading group trips, some that include backpacking and camping, and holding summer camps for kids and paddling classes for all ages.

And while any day on a river is a good day, his best days are when he sees someone start to love paddling as much as he does. He sees it in their body language. On the shore, they’re tight, reserved. Then they get some instruction, learn to trust their PFDs, and start to melt into their surroundings. They quiet down long enough to hear a pileated woodpecker that just swooped beyond view. They suck in their breath as they paddle past the gnawed end of a stick left behind by a beaver.

“It’s just being in a space where there aren’t cars zooming by, there’s not the buzz of the city,” Dixon says. “People start to relax into those connections, and you can see all the stress of daily life shed away.”

Dixon, who met his wife, Andrea, on the Appalachian Trail and later proposed to her while they hiked Annapurna 3 in Nepal, marvels at the peace to be found within yards of some of the Triangle’s busiest thruways.

Our morning escape has been brief; he has to pick up his son, Miles, 5, and daughter, Zella, 9 months, from daycare at noon. But even an hour or so on this abbreviated river link is enough time for him to impress me with what there is to love out here. Like the sense you’re in the middle of nowhere; West Point on the Eno Park sits on 388 mostly wild acres. And how, if you take notice while you’re on the water, you can see two different terrains diverging at the river’s edges.

To the west, craggy boulders, splotched with dusty green lichen, seem to tumble out of the earth as the land climbs toward the foothills. Hickories, oaks, and azaleas cover the hillside. Look east, and the land begins to level off. A flood plain forest, dotted with sycamores and the ruffled bark of river birch, emerges.

Dixon could spend all day out here and not run out of insights to share. We pause at several points along the way. Sometimes we talk about the wildlife you’re likely to encounter here — deer and turtles, for sure, and possibly eagles and beavers. At other stops, he describes the different seasons on a Piedmont river. We also slow down simply to appreciate the tranquility, the beauty of woods not quite clear of winter; exposed branches and bark jagged and arresting.

All this on less than two miles of river.

Before long, we turn downstream and head back toward the dam. The sun, nearly overhead, has turned this into one of those gilded days, with cerulean skies and perfect temperatures. We float along silently for a while, soaking up our surroundings.

The river’s momentum deposits us at the dock too soon. We step out onto the footpath, and Dixon returns the boat to its rack. He’s still smiling; he loves his job.

After a funny story about the boat he started to buy on eBay and then discovered had been stolen from nearby family land where he had it stored, we say goodbye, and he climbs into his truck to go collect his kids.

Before long, I’m pulling out onto Roxboro Road, merging with the cars passing service stations and fast-food restaurants, and getting caught in the long line forming behind asphalt trucks.

But I’ve stowed the river’s serenity inside me, an adequate dose to hold me until the next chance to venture out just beyond the rush.

Paddle Under the Stars
Scheduled April through October, Paddle Under the Stars puts paddlers on Jordan Lake for an entertaining and educational presentation by a staff member of the Morehead Planetarium and Science Center. Paddlers experience nature under the dark of night while also learning about the night sky and some of the myths it has inspired through the ages.

Taste of Home Trips
Taste of Home Trips offer another leisurely paddle on the area’s scenic waterways. The outings end with beverages and meals prepared and served by local businesses such as Foothills Brewery, Dain’s Place, Rue Cler, and Pop’s.

All levels of paddling skills are welcome on these outings.