On the day that Adam Hughes was born, his family was killing hogs. “My mom was in the hospital with me, and we were there completely by ourselves because the hog killing wasn’t finished,” says Hughes, who opened his barbecue restaurant, Old Colony Smokehouse, in Edenton in 2019. His grandfather raised crops and hogs in Bertie County, and by the late 1980s, his grandmother’s pork sausages were so regionally popular that the family was selling hundreds to thousands of pounds of it each week. The school bus used to drop Hughes off in front of his grandparents’ store on their property, and, over time, he learned the ins and outs of the operation. 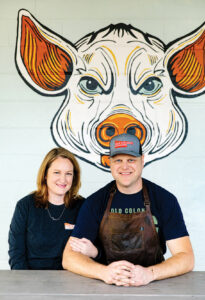 Today, Hughes is an adept pitmaster, managing a 16- to 18-hour smoking process for his chopped pork. Like his grandmother and her approach to sausages, he’s meticulous about which cuts make it into the final product. The light touch of his traditional vinegar-and-pepper dressing is all that the fatty and tender meat needs to shine — although he does offer a scratch-made version of his family’s sauce recipe. When Hughes was a kid, his mother’s take on his grandma’s barbecue sauce — a little sweeter than the original — quickly earned a following beyond their home. “I used to joke that I had more friends because of my mom’s barbecue sauce than I did because of my personality. If I brought in leftovers, everyone wanted to sit with me at lunch,” he says, laughing.

When Hughes left for college at East Carolina University, he asked his mom to teach him that sauce recipe. Away from home, missing her cooking, he fished a beat-up grill from a dumpster and fixed it up. “After that, it was over,” he says. “I was a grilling machine.”

Hughes fell in love with grilling as he lugged his equipment to tailgates. After college, he and his wife, Elizabeth, moved to Edenton, where he entered barbecue competitions on weekends, building a name for himself across the mid-Atlantic and racking up trophies that now line a wall of his restaurant.

Despite Hughes’s family history, pork isn’t the star at Old Colony Smokehouse. Instead, customers come in droves for his Texas-style brisket. It’s the restaurant’s best seller by far, and on some days, it sells out less than 90 minutes after opening for lunch. “[We serve] the same quality of food that I would turn in to try and win $10,000 in a contest,” Hughes says.

That care is obvious in all of his dishes, which also include a smoked turkey breast and a jalapeño-Cheddar sausage. Some offerings are classic North Carolina, like the gooey, first-rate mac ’n’ cheese and the 15-layer chocolate cake that Hughes’s mom makes on Saturdays. Others — like the South Carolina-style Palmetto Sauce and the Alabama-style white sauce — are inspired by Hughes’s favorite barbecue traditions outside of the Old North State. 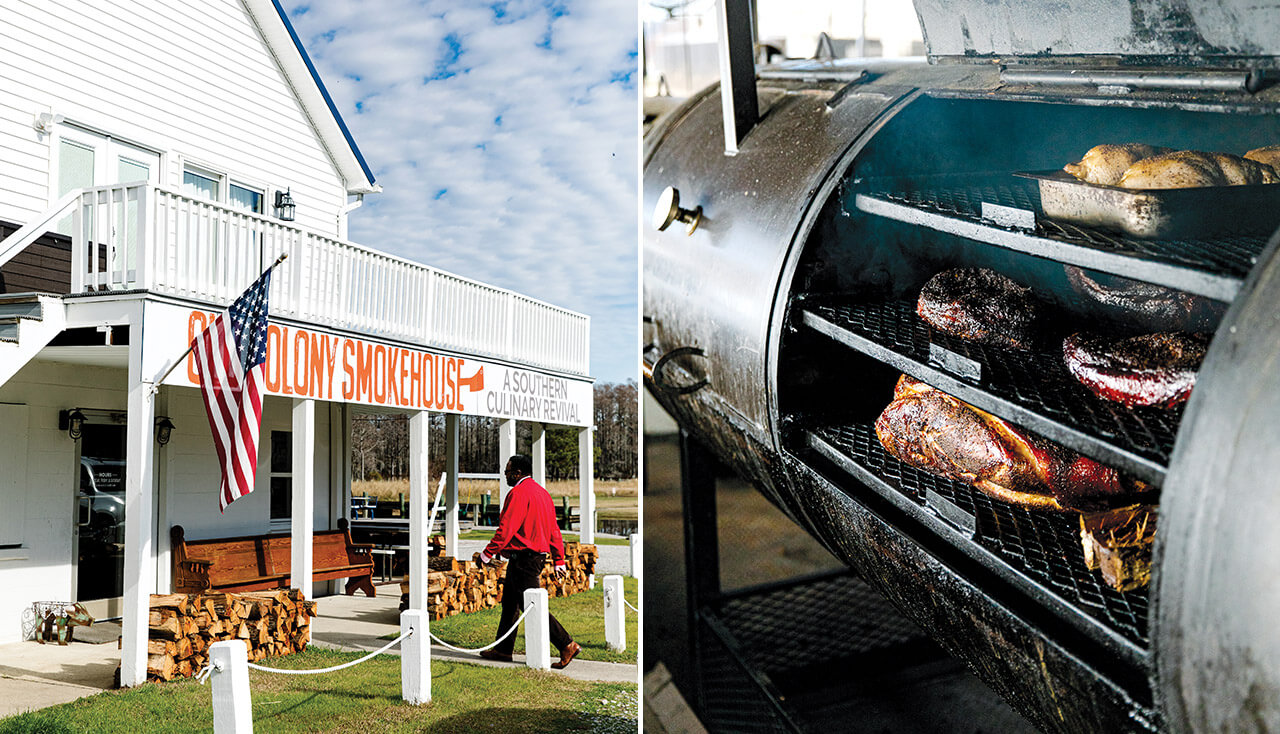 For Adam Hughes, the perfect brisket requires an offset wood-fired smoker, so he learned to cook all of his meats on one behind the restaurant. photographs by Anna Routh Barzin

But Hughes has earned the right to break a few rules. Old Colony Smokehouse is an extension rather than a replica of his history, highlighting both his upbringing in Bertie County and the Hughes family’s treasured trips to the South’s great barbecue regions. Regardless of the origins of a sauce or a style, there’s a through line of quality and precision.

“It’s our way of showing you our favorites,” Elizabeth says. “If you invite somebody over, you want to show them what you do best.”