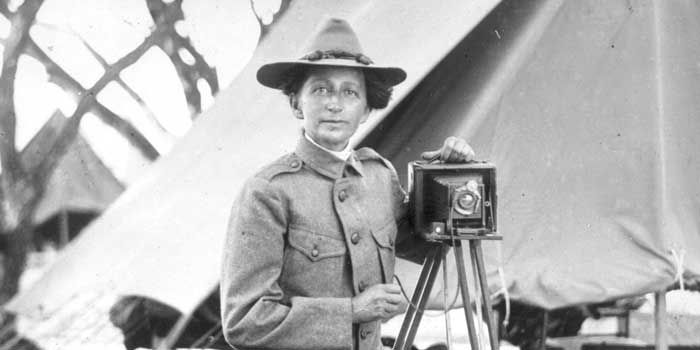 In the half century since her death, the memory of North Carolina photographer Bayard Wootten — a female pioneer in the field — has faded like an old photo, dimmed and yellowed by time.

Once celebrated for her strikingly artistic photographs, most of them made in her home state; her numerous distinctions, exhibitions, and publications; and above all, her ability to survive and thrive in a field dominated by men, Wootten no longer commands anything close to the recognition she merited during her 1930s heyday.

“The more I studied her, the more I felt she was a really great photographer who had been unrecognized and overlooked by history,” says Jerry Cotten of Chapel Hill, author of Light and Air, a 1998 biography of Wootten that includes more than 130 of her black-and-white photographs. “While she was alive, she was very well known all across North Carolina — but after her death (in 1959), she was largely forgotten. I guess people have short memories.”

Born in 1875 in New Bern, Wootten grew up pursuing her interest in art, a talent she inherited from her mother. As a young woman, she taught art for a time, then sold paintings and retouched photographs after her marriage in 1897 to Charles Thomas Wootten. That union produced two sons but was short-lived. Her husband left her in 1901 — which she later attributed to his disappointment when he learned her family didn’t have as much money as he thought.

“My husband thought my family was wealthy and that I’d eventually come into some money,” Wootten told the Durham Morning Herald in a 1952 interview. “When he found out later that we had no money, he left me.”

Wootten never remarried — never even courted anyone seriously after her divorce became final in 1907 — and it’s likely the bitter feelings had something to do with how intently she focused on her career afterward.

Around 1904, Wootten turned her attention to photography, quickly progressing from shutterbug to professional photographer and opening her own studio in New Bern. Although she entered the profession for economic reasons — she was, after all, a young, single mother — she loved the idea of combining her photography into a business and an art form, and that’s exactly what she did.

Early in her career, she focused primarily on commercial photography — postcards, in particular — until her fledgling studio became more established.

Then she began to branch out and concentrate more on using her photography as a form of artistic expression.

“She was what’s known as a pictorial photographer,” Cotten says. “They were photographers who believed that creating an artistic photograph was their primary objective. They were not so much interested in reality as they were producing a beautiful image. It was a very artistic style.

“Wootten was a lifelong adherent of pictorialism, even though that movement started to decline. It peaked around 1907, and by the 1920s, it was practiced only by relatively few photographers, but Wootten continued in this style throughout her life.”

Wootten probably did her best work in the 1930s after she moved to Chapel Hill and opened a studio, Cotten says. She found numerous photo opportunities in the town’s rich college environment — she once photographed future novelist (and Asheville native) Thomas Wolfe, for example, when he was a student at the University of North Carolina — and began to excel in book illustration. Her portfolio includes such titles as Backwoods America (1934), Old Homes and Gardens of North Carolina (1939) and Charleston: Azaleas and Old Bricks (1937).

Wootten traveled throughout the Southeast — including North Carolina, particularly the mountains in the western part of the state — on her photo-taking excursions and developed a reputation as a photographer who would do anything necessary to get the photo she wanted. She once allowed herself to be lowered over the edge of a cliff with a rope in order to get what she believed to be the best angle for a photo of Linville Falls. She also flew in an open-air Wright Brothers Model B airplane at a 1914 celebration in New Bern and, of course, made aerial photos during the flight; some historians believe those are the first aerial photos ever made by a woman. She also made publicity photos for the inaugural season of The Lost Colony in 1937.

“I went on some trips with her when she went to make her pictures,” recalls Mary Moulton Barden of New Bern, whose father — and Wootten’s half-brother, George C. Moulton — partnered with Wootten in her photography business.

“I was maybe 10 to 13 years old, and I got introduced to backwoods America that way. She would go on all these back roads in the mountains of North Carolina; I didn’t think we were really in the mountains unless we were on a dirt road somewhere. She always had an assistant with her, and, I remember, sometimes we had to wait for the clouds to get just right before she would take a particular picture. It could be an hour, two hours — it didn’t matter to her.”

During those journeys through backwoods America, Wootten made what Cotten believes to be her most significant contribution to photography — documenting the lower classes of society often ignored by other photographers.

“She was photographing during the Great Depression and documenting that time period,” he says. “She was very interested in photographing the common man and woman, both black and white, and this produced some really, really great images — some of her best work, in my opinion. I think, with her having grown up in New Bern, she certainly knew rural life well and appreciated it for its photographic value.”

However, Barden says, Wootten came from a very aristocratic family and was equally at home being around the era’s wealthy and influential members of society. “She lived on the edge of poverty until she was well established, so I think she had a lot of friends in the lower class and probably understood the lower-income people well,” she says. “She would be at home with the aristocrats or the common people. That’s just who she was. She could be absolutely charming and witty — people always enjoyed talking to her — but she was also pretty determined to do things her own way. She was a hard worker and wanted things done right.”

Several collections of Bayard Wootten’s work exist across the state. The Bayard Morgan Wootten Photographic Collection, located in the North Carolina Collection, as well as the Southern Historical Collection, of Wilson Library on the campus of the University of North Carolina at Chapel Hill, contains more than 90,000 images and other materials created by Wootten and the Wootten-Moulton studios. The works include glass negatives, film negatives, photographic prints, and artwork — as well as manuscript materials.

Wootten’s work is the focus of the collection. There are many examples of what Wootten is most known for. These include: scenic landscape photography, much of it depicting the mountains and western North Carolina, as well as scenes of daily life of both white and black citizens living in the more rural areas of the state.

Visitors can see these items by arranging a viewing through the university’s website or by browsing the online archive (lib.unc.edu/ncc/index.html).

Pack Memorial Library in Asheville also has an archive of Wootten’s work, accessible through the online archive (buncombecounty.org/governing/depts/library) or by visiting the library.

And Penland School of Crafts’ collection of Wootten images can be found online at Western Carolina University’s Craft Revival website (craftrevival.wcu.edu). To view the photographs in person, make an appointment with Penland’s archivist.

Jimmy Tomlin lives in Greensboro and is an award-winning feature writer for The High Point Enterprise. Jimmy’s most recent stories for Our State were “First, Dessert” and “Pride of Place” (November 2011).