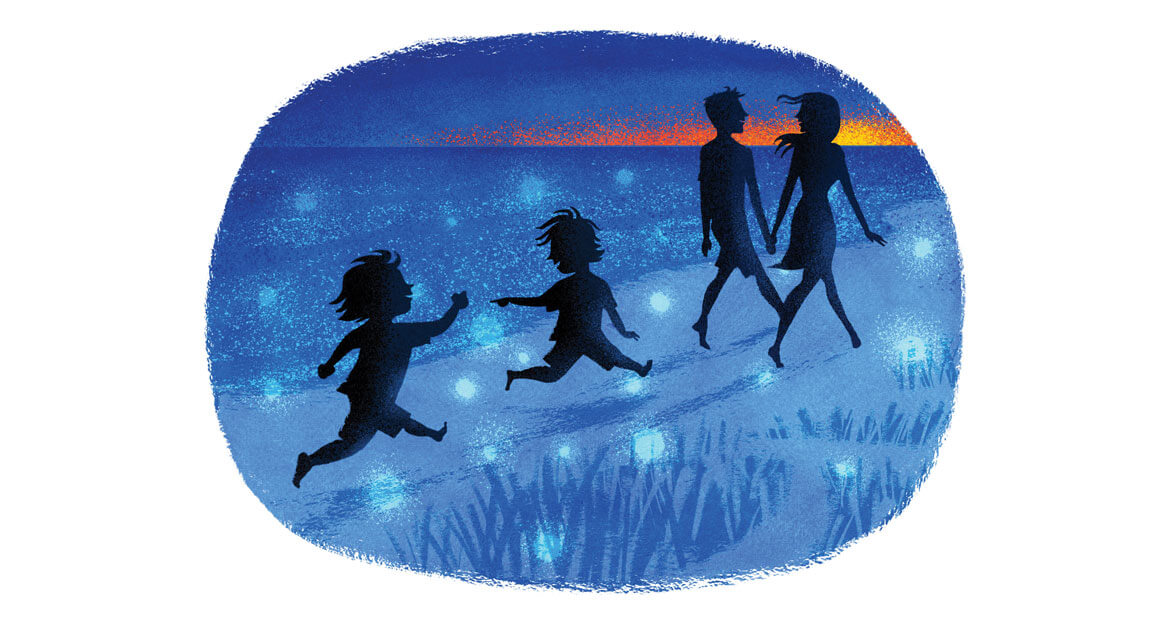 My favorite picture of Tita, my wife, and The Toad, our oldest, is no real contest: It’s the one at Oak Island, three thin months into The Toad’s life. We’re down on the beach in the late evening, and she’s looking back into the camera, smiling, sunglasses on, hair hooked behind one ear. She’s radiant, if I might use a word like that — she looks every bit the 1970s movie star, time-traveled directly into 2010. She’s wearing The Toad in a red wrap, and he’s smashed into her chest, asleep in a huge, floppy, zebra-striped hat. The light is that impossible beach sunset light. Waves break in the background.

This is our first trip with him. We’ve bought a sun-blocking baby tent — the Toad Tent — and he’s spent the afternoon lying on his back on the sand, fighting his muslin swaddle, hollering happily at the wind flapping the yellow walls. This is the night we’ve eaten crab cakes from Haag and Sons, the night we’ve worked our way down from high alert to medium, the night we see volunteers helping hatchling turtles make their way from nest to sea. This is our first after-dinner beach walk with him, our first as a family. This is also the first time he’ll sleep through the night, and the next morning is the morning we’ll wake up foggy and confused: Did we sleep through the night? Did we really see baby sea turtles? Where are we? What happened?

This is not about sleep, however. This is about putting the dishes in the sink each night, sliding closed the condo’s glass door, rolling your jeans up to your knees, and — almost no matter what — walking on the beach after dinner.

They’re both old enough now — the Toad and his brother, The Wee — to walk like my brothers and I did, kids trailing behind the grown-ups in full darkness, a feeling that you’ve been let in on some corner of the adult world. Summer stars wheel overhead by the millions. There are tide pools to kick your feet through. And last summer, in those tide pools, on the wilder south end of Topsail Island: lights. Mamá! Daddy! Their voices were the sound of pure wonder, and who could blame them? The beach was glowing — or their footprints were, anyway, and the pools where they kicked at them. What is it? Phosphorescence, I told them, already wrong, but the next part was true: tiny lit-up creatures in the water. Kind of like fireflies, I said. They were laughing, awestruck, saying, Look! Look! and dragging long, shining streaks in the sand with their toes.

Bedtime’s a looser construct at the beach, and the line between real and imagined is, too: The water can thrum blue. I’ve got pictures of The Toad turning cartwheels after an evening storm, pictures of The Wee under a pier with his grandmother, and one dim, fabulous shot of the boys wearing shorts and hoodies, holding hands, walking off into the gloaming — but no pictures of that bioluminescent night. It was too dark, or I hadn’t brought the big camera down, or I didn’t have my phone with me — or maybe we were just walking, not worried about anything other than that. Maybe it’s better this way. Maybe some things you just have to remember.

My wife and I are carrying on the traditions that my parents taught me: The boys get Popsicles, get to run along the water’s edge in their pajama pants and oversize T-shirts, get to range as far afield as they like. Now, they always, always check to see if the beach is glowing. Most nights, it isn’t. Most nights, it’s just the regular magic of the ocean. A few times since then, though, the blue lights have returned — sometimes in the breakers, sometimes just on the beach. Always, they holler at us: Look! Look! Do we see, they want to know. We do, we tell them. We see you. They laugh and shout and run ahead, shadows long in the moonlight. Tita takes my hand. We walk along, wait for the boys to circle back our way. We wait for the impossible to happen once more.